Copyright: © 2020 Zheng M, et al. This is an open-access article distributed under the terms of the Creative Commons Attribution License, which permits unrestricted use, distribution, and reproduction in any medium, provided the original author and source are credited.

Caspase-6 was discovered decades ago, but its roles in biological processes remain largely unknown. Recently, we have demonstrated that caspase-6 plays a critical role in influenza A virus (IAV)-induced cell death and innate immune responses. During IAV infection, Z-DNA binding protein 1 (ZBP1) initiates ZBP1-PANoptosome assembly to drive inflammasome activation and cell death, and we showed that caspase-6 interacts with RIPK3 to enhance the interaction between RIPK3 and ZBP1, thus promoting PANoptosome assembly. Moreover, the caspase activity of caspase-6 is not required for this process, suggesting a caspase-independent function of caspase-6 during IAV infection. Additionally, we found that caspase-6 is required for the alternative activation of alveolar macrophages in response to IAV infection. Our findings provide an opportunity to reconsider the physiological role of caspase-6.

Caspase-6: An Apoptotic and Non-apoptotic Caspase

Caspases are critical for regulating cell death, immune responses, and homeostasis. These cysteine-dependent endoproteases cleave their substrates after certain aspartic acid residues [1]. So far, thirteen caspases have been discovered in mice and humans. They are composed of an N-terminal pro-domain of variable size and a C-terminal protease domain consisting of one small and one large catalytic subunit [2,3]. Caspases have been found to be involved in several biological processes, including inflammatory responses, programmed cell death, homeostasis, and cell differentiation [2,4]. Those that directly participate in the inflammatory cell death pathways are called inflammatory caspases, including caspase-1, -4, -5, and -11, while those mediating apoptosis activation are known as apoptotic caspases, including caspase-3, -6, -7, -8, -9, and -10 [2].

Apoptotic caspases can be classified as initiator caspases (caspase-8, -9, and -10) and executioner caspases (caspase-3, -6, and -7) [2]. Caspase-6 has long been recognized as an apoptotic caspase. Overexpression of caspase-6 can induce apoptosis in mammalian cells [5]. Additionally, it can mediate nuclear apoptosis after activation by processing Lamin A/C, caspase-6–specific nuclear intermediate filament proteins, and nuclear mitotic apparatus protein [6-8]. Very recently, one report showed that caspase-6–induced apoptosis is a key step for the development of nonalcoholic steatohepatitis [9]. However, the full mechanistic details of how caspase-6 is activated remain unclear. Reports suggest that it can be activated in both a caspase-3–dependent and –independent manner [10-13]. Also, caspase-6 can undergo autoactivation both in vitro and in vivo [14,15]. It is possible that the activation of caspase-6 is a context-dependent event. More studies are required to determine the detailed mechanism of caspase-6 activation.

In addition to being an executioner of apoptosis, caspase-6 can also act as a non-apoptotic caspase. Caspase-6 plays crucial roles in several neurodegenerative diseases, including Huntington’s disease [16-19], Alzheimer’s disease [20-22], and Parkinson’s disease [23]. While active caspase-6 has been detected in these processes, its activation does not lead to apoptosis in these contexts. Additionally, caspase-6 has also been found to be involved in several inflammatory responses. Caspase-6 can cleave IL-1 receptor-associated kinase M to regulate neutrophilmediated TNF production in macrophages [24]. Another study reported that active caspase-6 can induce microglial TNF secretion to drive inflammatory pain [25]. Furthermore, caspase-6 was shown to be critical for the differentiation of alternatively activated macrophages [26]. All these studies indicate that caspase-6 has dual functions, acting as both an apoptotic and non-apoptotic caspase.

Despite the classification of caspase-6 as an apoptotic caspase and the knowledge of its association with neurological disorders, the functions and importance of caspase-6 in innate immunity have remained largely a mystery. In our recent study, we found that caspase-6 is critical for influenza A virus (IAV)-induced cell death and inflammatory responses [27]. In the absence of caspase-6, IAV-induced cell death and inflammasome activation is attenuated in bone marrow-derived macrophages (BMDMs). Similarly, the amount of inflammasome-related cytokines, IL-1β and IL-18, is significantly reduced in the supernatants of IAV-infected Casp6–/– cells. Furthermore, caspase-6 was critically involved in the host defense against IAV infection in a murine model, and Casp6–/– mice were more likely to succumb to infection and had a higher viral burden [27].

During IAV infection, Z-DNA-binding protein 1 (ZBP1) acts as an innate immune sensor to detect IAV vRNPs and activate cell death through PANoptosis [27-33]. PANoptosis (‘P’, Pyroptosis; ‘A’, Apoptosis; ‘N’, Necroptosis; and ‘optosis’) is defined as “a unique inflammatory programmed cell death regulated by the PANoptosome, which provides a molecular scaffold that allows for the interactions and activation of machinery required for inflammasome/pyroptosis (such as NLRP3, ASC, caspase-1), apoptosis (caspase-8), and necroptosis (RIPK3/RIPK1)” [27,31,32,34]. The ability of these molecules to interact allows for intricate coregulation between cell death pathways that had previously been thought to be independent. PANoptosis has been implicated in infectious and autoinflammatory disease, cancer, and beyond [27,28,31,34-39]. We found that caspase-6 is a critical component of the ZBP1-PANoptosome (Figure 1) [27]. Without caspase-6, both PANoptosis and inflammasome activation following IAV infection are impaired, suggesting the essential role of caspase-6 in the assembly of the PANoptosome. 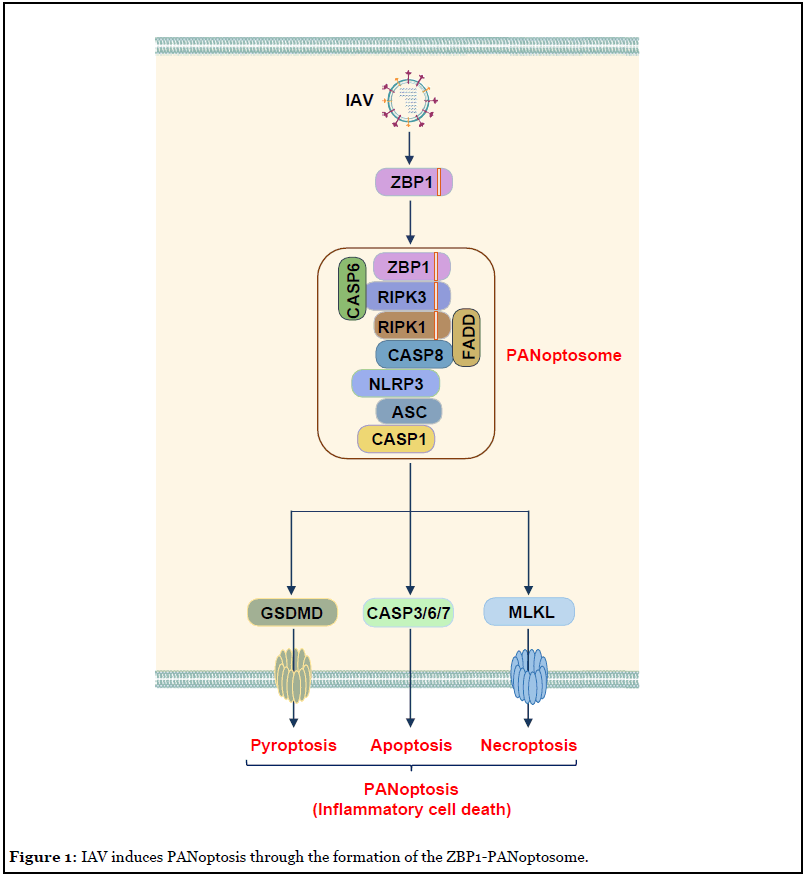 Mechanistically, ZBP1 contains two nucleic acid sensing Zα domains and a RIP homotypic interaction motif (RHIM). The Zα2 domain is critical for sensing IAV upstream of PANoptosis [28,40-42]. The RHIM then allows ZBP1 to form a complex with RIPK3 and RIPK1, two other RHIMcontaining proteins, to drive cell death [28,40-42]. In this process, caspase-6 interacts with RIPK3, thus enhancing the interaction between RIPK3 and ZBP1 in the presence of RIPK1 [27]. It has been shown that without a functional RIPK1 RHIM domain, ZBP1 can sense endogenous ligands and interact more strongly with RIPK3 to activate necroptosis [29,43-46], suggesting that RIPK1 competes with RIPK3 to interact with ZBP1. Our study provides a possible explanation for how ZBP1 interacts with RIPK3 in the presence of RIPK1 under physiological conditions. Through binding to caspase-6, the affinity of RIPK3 for ZBP1 is increased during IAV infection, without altering the binding activity of RIPK1. However, it is unclear how and when caspase-6 binds to RIPK3 in this process. Also, more studies are needed to test the requirement of caspase-6 in other biological processes that can recruit RIPK3 to ZBP1. It is clear that RIPK3 acts as a key adaptor for the ZBP1-initiated PANoptosome [28,41,42]. However, in the absence of RIPK3, ZBP1-mediated, IAV-induced cell death is increased later in the infection phase, and this cell death signal is transmitted through RIPK1 [42]. This implies that the components of the IAV induced-PANoptosome may vary over time throughout the progression of the infection. More investigations are warranted to elucidate the dynamics of the ZBP1-PANoptosome components and how caspase-6 is involved in these cell death mechanisms.

It is interesting to note that the caspase activity of caspase-6 is not required for it to enhance the interaction between RIPK3 and ZBP1, evidenced by the fact that both caspase-dead or uncleavable mutants of caspase-6 can interact with RIPK3 and therefore promote the interaction between ZBP1 and RIPK3. Additionally, both the N- and C-terminal domains of caspase-6 can immunoprecipitate the full length, N-, and C-terminal domains of RIPK3. Likewise, both N- and C-terminal domains of caspase-6 have the potential to increase the binding of RIPK3 to ZBP1. Since both caspase-6 and RIPK3 contain intrinsically disordered regions [27,47,48], it is likely that the interaction between caspase-6 and RIPK3 is mediated by those regions. Overall, our study suggests that caspase-6 possesses a caspase-independent role in cell death. This is unique from its role in neurodegenerative diseases or other inflammatory responses, during which the catalytic activity of caspase-6 is required for the proteolytic activation of its substrates to execute its non-apoptotic function [18,19,21-26]. Our study is the first to show that caspase-6 can function without caspase activity [27].

Caspase-6 is not the only caspase that possesses caspase-independent functions. Caspase-8 has been shown to act as a scaffold to promote inflammasome activation downstream of Toll-like receptors [49] and proinflammatory cytokine production induced by TRAIL [50]. Recently, the scaffold function of caspase-8 has also been shown to be important in development. In mice expressing a caspase-dead version of caspase-8, deletion of MLKL leads to apoptosis and pyroptosis in the intestines, suggesting that caspase-8 can act as a scaffold to promote cell death during development [51,52]. These studies suggest that caspase proteins have the potential to play caspase-independent roles in biological processes. It is therefore not unprecedented to find that caspase-6 could regulate the RHIM-mediated interaction between RIPK3 and ZBP1 via binding to RIPK3 in response to IAV infection in the absence of caspase activity. It is important to note, however, that due to the limitation of currently available caspase-6 antibodies, we did not detect an endogenous interaction between RIPK3 and caspase-6 in primary cells. We did find that the binding of ZBP1 to RIPK3 is reduced during IAV infection in caspase-6–deficient primary cells. Developing better caspase-6 antibodies may help resolve this issue. Also, the generation of transgenic mice with tagged caspase-6 is another promising method that could be used to confirm the endogenous protein interactions. Additionally, RHIM-mediated interactions tend to form a detergent insoluble amyloid-like complex [48,53-56]. It is possible that caspase-6 interacting with RIPK3 is present in the insoluble part of cell lysates under physiological conditions. More studies are required to clarify these potential mechanisms.

Although it was discovered decades ago, caspase-6 has remained enigmatic. As an apoptotic executioner caspase, it seems to be redundant with caspase-3 and -7. Initial studies demonstrated that caspase-6 is critical for nuclear apoptosis [8,57], but studies with Casp6–/– cells indicate that nuclear breakdown is normal in the absence of caspase-6 during apoptosis [58]. Additionally, deleting caspase-3 and -7 can block both extrinsic and intrinsic apoptosis in human leukemia cells, but deleting caspase-3/-6 or caspase-6/-7 does not have any inhibitory effect on extrinsic or intrinsic apoptosis [59]. These studies indicate that caspase-6 is dispensable during apoptosis and that it can be compensated by the other proteases, which raises a question about its physiological role. It is possible that the primary function of caspase-6 is as a non-apoptotic caspase. It will be informative to conduct mass spectrometry analyses to identify the interactome of caspase-dead or uncleavable caspase-6. Given that the currently available antibodies for mouse caspase-6 do not have high enough affinity and specificity for immunoprecipitation, it will be important to establish transgenic mice expressing tagged mutants of caspase-6 and use primary cells or tissue samples to conduct immunoprecipitations. Similar strategies can be employed to investigate the PANoptosome components that are induced by IAV throughout the timeline of infection to study the role of caspase-6 and other molecules at different infection phases.

Overall, beyond its originally identified apoptotic functions, caspase-6 has critical roles in innate immunity, ZBP1-mediated NLRP3 inflammasome activation, PANoptosis, and host defense during IAV infection. While the molecular details of the function of caspase-6 in the PANoptosome have been described, this caspase still has many unsolved mysteries to be investigated.

We apologize to our colleagues in the field whose work could not be cited due to space limitations. We thank all the members of the Kanneganti laboratory for their comments and suggestions and Rebecca Tweedell, PhD, for scientific editing and writing support. Research studies from our laboratory are supported by the U.S. National Institutes of Health (AR056296, CA253095, AI124346, and AI101935 to T.-D.K.), and the American Lebanese Syrian Associated Charities (to T.-D.K.). The content is solely the responsibility of the authors and does not necessarily represent the official views of the National Institutes of Health.

The authors declare that they have no conflict of interest.