Copyright: © 2020 Ahmed I, et al. This is an open-access article distributed under the terms of the Creative Commons Attribution License, which permits unrestricted use, distribution, and reproduction in any medium, provided the original author and source are credited.

Human monocytic ehrlichiosis (HME) is an emerging life-threatening tick-borne disease caused by the obligate intracellular bacterium Ehrlichia chaffeensis. HME is often presented as a nonspecific flu-like illness characterized by presence of fever, headache, malaise, and myalgia. However, in some cases the disease can evolve to a severe form, which is commonly marked by acute liver injury followed by multi-organ failure and toxic shock-like syndrome [1-3]. Macrophages and monocytes are the major target cells for Ehrlichia, although this bacterium can infect other cell types such as hepatocytes and endothelial cells [4]. In this article, we discuss how macrophages polarization to M1 or M2 phenotypes dictate the severity of ehrlichiosis and the outcome of infection. We will also discuss the potential mechanisms that regulate such polarization.

Macrophages are innate immune cells that play a key role in regulation of innate and adaptive immune responses against infections with several pathogens as they respond to pathogens and tissue injury, serve as antigen presenting cells priming the adaptive immune response, drive inflammation and host defense as well as repairing damaged tissue [5-7]. Macrophages reside in almost all of the lymphoid and non-lymphoid tissues [8]. Two major lineages are currently known: cells that are derived from myeloid progenitor cells in the bone marrow (BM) that give rise to blood-circulating monocytes that migrate to sites of host insult, and macrophages that are derived from the yolk sac and present in the tissues as resident macrophages [9-11]. Examples of tissue-resident macrophages are alveolar macrophages in the lung and Kupffer cells in the liver. Several macrophage subsets with distinct functions have been described. Classically activated macrophages (M1 macrophages) mediates host defense against several bacterial, viral and protozoal pathogens and they play a role in antitumor immunity [12,13]. These M1 cells are characterized by MHC class II, CD86 and CD40 upregulation [14,15], downregulation of mannose receptor (CD206), their ability to engulf and digest microbes, secrete Pro-inflammatory/T helper 1 (Th1)-promoting cytokines such as IL-12, IL-1β, IL- 6, TNF-α production of microbicidal molecules; nitric oxide (NO), and reactive oxygen species (ROS), secretion of chemokines for recruitment of immune cells such as CCL2/MCP-1, and present antigens to T cells for the initiation of adaptive immunity [16-19]. Alternatively activated macrophages (M2 macrophages), on the other hand, are characterized by upregulation of markers such as CD206, arginase-1, IL-10, and TGF-β [20,21] (Figure 1). M2 cells play a role in down regulating the inflammatory mediators, up regulating the antiinflammatory mediators, expressing scavenging receptors (e.g. mannose receptor), phagocytizing apoptotic bodies and cellular debris, and promoting wound healing and tissue repair [17]. These M2 macrophages are a strong inducer of T helper 2 (Th2) cells and/or regulatory T cells. M1-macrophage polarization is enhanced by both IFN-γ and Lipopolysaccharide (LPS), while M2 polarization promoted via IL-4, IL-10 and IL-13 [22,23].

However, several studies suggest that differentiation of M0 macrophages to M1 and M2 subsets is an oversimplification of macrophages phenotypes where different environmental stimuli lead to differentiation of sub-groups within each subset [24,25]. For example, M2 macrophages are sub-grouped as M2a (induced by IL-4 and IL-10), M2b (induced by toll-like receptors (TLR), and IL-1 receptor (IL-1R), and M2c (induced by IL-10) [26-29]. In addition, recent proteomic and transcriptomic studies have provided evidence for the phenotypic heterogeneity of macrophages based on different stimuli, suggesting that multiple phenotypes could exist during course of infection or inflammation [30-32]. Analysis of the functional responses of the different phenotypes of macrophages will be critical in understanding the pathogenesis of several infectious and inflammatory human diseases including ehrlichiosios.

Our study has found that in vitro infection of unprimed primary bone marrow derived macrophages (BMM) with highly virulent Ixodes Ovatus Ehrlichia (IOE) (the causative agent of fatal murine ehrlichiosis), or mildly virulent Ehrlichia muris (the causative agent of mild murine ehrlichiosis) induce polarization of BMM into M1 and M2 phenotypes, respectively [25]. IOE-induced polarization of macrophages into M1 phenotype is rather interesting since Ehrlichia species do not express LPS [33], which is an important pathogen-associated molecular pattern (PAMP) that primes macrophages into M1 phenotype [34]. Moreover, cells infected with both IOE or E. muris do not provide significant levels of IFN-γ, IL- 4, and IL-10 that could promote M1/M2 polarization via autocrine/paracrine signals [25]. Nonetheless, how IOE or E. muris trigger M1 and M2 polarization, sequentially, and what are the ehrlichial PAMPs associated with these processes remains obscure. Using murine model of mild and fatal ehrlichiosis, we have further showed that Ehrlichia-induced liver damages and sepsis linked with accumulation of infiltrating pro-inflammatory M1 macrophages/monocytes in the liver [25]. Accumulation of monocyte-derived M1 macrophages and their production of inducible nitric oxide synthase (iNOS) and Granzyme B in the liver of IOE-infected mice coincided with organ damage, dysfunction, and high bacterial burden [35-38] (Figure 2A). In contrast, mild ehrlichiosis is associated with polarization of macrophages into M2 phenotypes, which are important in the resolution phases of inflammation. Notably, we found that M2 cells in E. muris-infected mice accumulated at initial site of infection, peritoneum, which was associated with effective bacterial clearance, limited inflammation, and minimal liver injury (Figure 2B). The differences in bacterial replication in IOE and EM-infected mice and its correlation with macrophages polarization suggest that differentiation of macrophages into M1/M2 cells influence the host immune response and outcome of infection [25]. 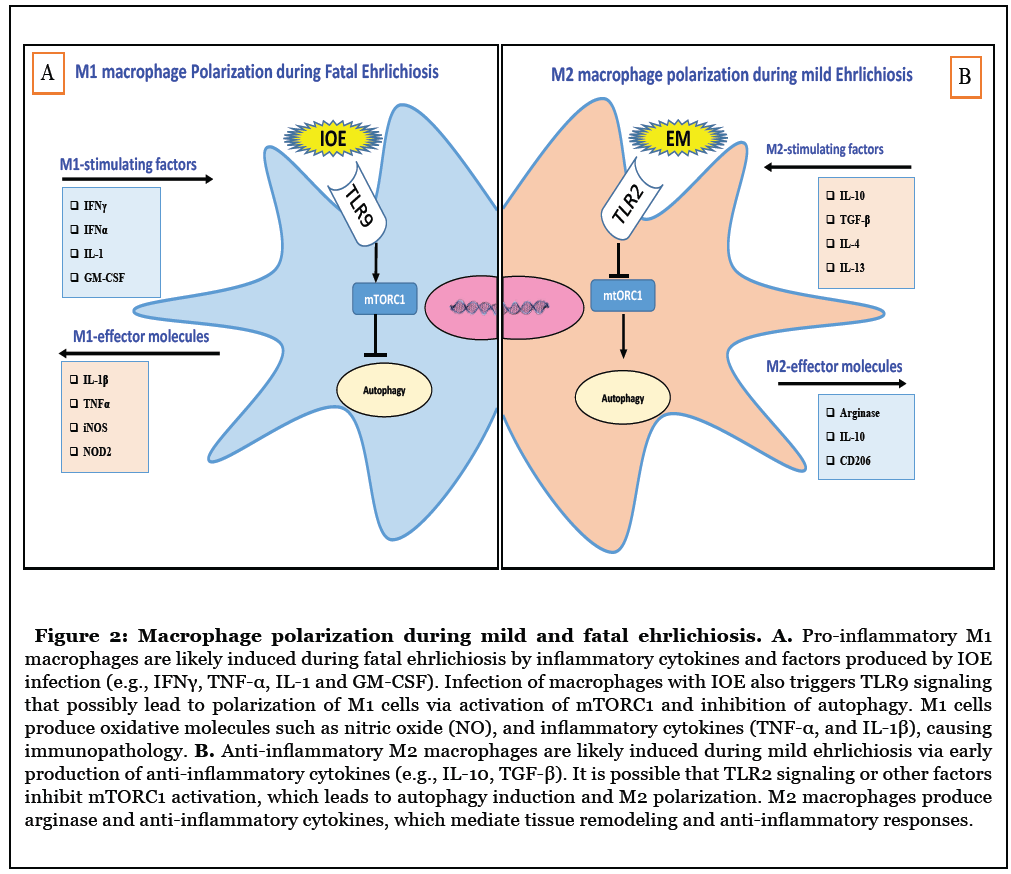 Macrophages as innate immune and antigen presenting cells are key factors that regulate the phenotype and function of adaptive immune responses against pathogens. Previous studies found that M1 macrophages promote differentiation of naive CD4 T cells into Th1 or Th17 phenotypes via production of Th1- or Th17- promoting cytokines as well as interferon regulatory 5 (IRF5) signaling [39]. Cross talk between Th1 or Th17 cells producing IFNγ and IL-17, respectively, can also promote macrophage polarization into M1 type via a positive feedback loop. Although, this M1-Th17 axis can mediate the clearance of pathogens, they can also increase inflammation and produce tissue injury [40]. Our murine studies demonstrate that fatal ehrlichiosis is linked to induction and expansion of Th17 and presence of high serum level of IL-17 in infected mice at day 7 post-infection (p.i.), which followed by death on days 8-10 p.i. This response in lethally (IOE) infected mice correlate with systemic cytokine and chemokine storm marked by significant increase in the serum levels of pro-inflammatory cytokines that known to promote M1-Th17 differentiation such as GM-CSF, IL-1 β, and IL-6 compared to uninfected or non-lethally (E. muris)- infected mice [25]. GM-CSF is known to polarize macrophages into M1-type, while IL-1β and IL-6 support initiation and increase of antigen-specific Th1 and Th17 cell responses [41]. Our data suggest that M1-Th17 axis likely play a role in the pathogenesis of fatal ehrlichiosis by promoting inflammation and host cell death [25]. Farther investigation required for understanding the role of Th17 to host protection during Ehrlichia and disease pathogenesis.

Regulation of macrophages polarization via mTORC1 activation and Autophagy.

These data suggest that metabolic state is a key factor in macrophage polarization in ehrlichiosis, which is consistent with conclusion made in other models [25]. For example, recent studies demonstrated that activated macrophages are glycolytic cells with different metabolic status of M1 and M2 cells [48]. Activation of M1 macrophages is linked to aerobic glycolysis, which lead to increased glucose uptake. Additionally, M1 polarization has been associated with the induction of a pentose phosphate pathway, which provides NADPH for the production of reactive oxygen species (ROS) and attenuates mitochondrial respiratory change, resulting in increased ROS production. In contrast, M2 macrophage utilizes fatty acid oxidation [49]. One of the mechanisms of differential metabolic states between M1 and M2 macrophages has been identified as a switch in the expression of phosphofructokinase 2 isoenzymes that appears to be a common event after LPS/IFN-γ or TLR 2, 3, 4, and 9 stimulation (M1 pathway) [48]. Nevertheless, although the differences in the metabolic states of M1 and M2 are well accepted, the underlying mechanisms involved in switching between metabolic states are not well understood.

To this end, other studies have shown that a key molecule of signal transduction pathway Akt also contributes to macrophage polarization, depending on its isoform. Akt1 isoform ablation in macrophages produces an M1 macrophage phenotype, and Akt2 ablation results in an M2 phenotype [50]. Akt2-/- mice are more resistant to LPS-induced endotoxin shock and to dextran sulfate sodium-induced colitis than wild-type mice, whereas Akt1 ablation renders the mice more sensitive to LPSinduced endotoxin shock [50]. Other studies suggested that the cAMP response element-binding protein is critical transcription factor for up-regulating IL-10 and arginine-1, markers of M2 phenotype, while suppressing polarization of M1 cells. This conclusion is based on data showing that deletion of two cAMP response element binding protein-binding sites from the C/EBPβ gene promoter blocks the downstream induction of antiinflammatory genes associated with M2-like macrophage activation [51]. Other study demonstrated an association between increased AMP protein kinase activity and a decreased polarization of pro-inflammatory M1 macrophages [52]. Similarly, AMP protein kinase α1-/- macrophages fail to differentiate into anti-inflammatory (M2) phenotype [53].

Finally, it was suggested that pattern recognition receptors such as toll like receptors (TLRs) and cytosolic receptors such as Nucleotide-binding oligomerization domain-containing protein 2 (NOD2) regulate M1/M2 polarization. Employing our murine models of mild ehrlichiosis, we have found that M2 polarization in mice infected with mildly virulent E. muris is linked to upregulation of TLR2 signaling, protective immunity, and development of mild disease. In contrast, M1 polarization in mice infected with highly virulent IOE is associated with NOD2 and TLR9 signaling, immunopathology, and development of severe liver damage and sepsis [57]. Notably, recently we have demonstrated that TLR9 signaling causes mTORC1 activation and activation of deleterious inflammasome activation that cause liver injury [47]. Since mTORC1 activation trigger M1 polarization, our data suggest that TLR9 signaling during fatal Ehrlichia infection induces M1 polarization. However, it is unclear whether NOD2 and TLR2 signaling directly induce M2 and M1 polarization during IOE and E. muris infection and the mechanisms involved. Previous studies have demonstrated that TLR2 may induce M2 polarization via stimulation of autophagic machinery [58,59]. On the other hand, NOD2 signaling in human macrophages may cause M1 polarization by promoting expression of proinflammatory cytokines [60]. However, other studies did not support this conclusion as NOD2 knockout did not cause any changes in the macrophage phenotype [25,61]. Nevertheless, the impact of differential sensing of intracellular pathogens by PRRs such as TLRs or NOD on macrophages polarization and the mechanisms involved require further examination.

In conclusion, using two different types of Ehrlicha as an infection model for fatal and mild ehrlichiosis, are excellent tools to understand the differences and participation of macrophages in both types of infection. We argue that the induction of M2 polarization at early stage of infection with mildly virulent E. muris control the infection by activating homeostatic and antiinflammatory responses. On the other hand, we conclude that polarization of M1 cells during infection with highly virulent IOE promote immunopathology and tissue injury, while eliminating replicating bacteria, via multiple effector mechanisms including production of iNOS, proinflammatory cytokines, and activation of inflammatory antigen-specific Th17 cells.

The Future Direction of Macrophages Polarization

A better understanding of macrophages differentiation into M1 or M2 have become essential for understanding the pathogenesis of several infectious, inflammatory and autoimmune diseases as well as cancer development and metastasis. Further studies are necessary to determine the molecular and cellular mechanisms that regulate polarization of macrophages and their plasticity during courses of infectious diseases. Information from these studies could be applied towards design of novel immunotherapeutic approaches. For example, approaches that control M1 polarization could attenuate excessive inflammatory responses and tissue damage. Similarly, therapeutic approaches that prevent polarization of M2 macrophages could be helpful for treatment of infectious or non-infectious diseases associated with immunosuppression such as cancer.