Megalin-Mediated Trafficking of Mitochondrial Intracrines: Relevance to Signaling and Metabolism

Copyright: © 2021 Sheikh-Hamad D, et al. This is an open-access article distributed under the terms of the Creative Commons Attribution License, which permits unrestricted use, distribution, and reproduction in any medium, provided the original author and source are credited.

The multi-ligand binding protein megalin (LRP2) is ubiquitously expressed and facilitates cell uptake of hormones, nutrients and vitamins. We have recently shown megalin is present in the mitochondria of cultured epithelial and mesenchymal cells, as well as many organs and tissues. Mitochondrial megalin associates with stanniocalcin-1 and SIRT3; two proteins that promote anti-oxidant defenses. Megalin shuttles mitochondrial intracrines (angiotensin II, stanniocalcin-1 and TGF-ß) from the cell surface to the mitochondria through the retrograde early endosome to Golgi pathway and requires Rab32. Deletion of megalin impairs mitochondrial respiration and glycolysis. This pathway overlaps molecular and vesicular trafficking defects common to Donai Barrow and Lowe syndromes, suggesting that mitochondrial intracrine signaling defects may contribute to the pathogenesis of these diseases.

Low-molecular weight proteins, cofactors, amino acids, metabolites and many bioactive signaling molecules are filtered through the glomeruli. Evolution has yielded highly conserved pathways in proximal tubule epithelium for the reabsorption of filtered molecules; however, such absorptive capacity may be overrun, as may occur in the setting of acute and chronic glomerulopathies, or congenital and acquired proximal tubule dysfunction. Relevant to the reabsorption of filtered molecules is megalin (low density lipoproteinreceptor related protein 2; LRP2), a large, multi-ligand-binding endocytic protein with broad roles in brain development, endocrine and cytokine signaling, maintenance of physiologic hemostasis, stress response, pharmacology, and toxicology [1,2]. In the following review, we will briefly discuss some aspects of megalin’s functions and expand on the role of megalin in facilitating mitochondrial intracrine signaling (defined as extracellular signaling molecules that are targeted to the mitochondria, where they are believed to exert some of their functions [3]).

The human LRP2 gene includes 79-exons that encode a 600 kDa type I single-pass transmembrane protein [4]. The extracellular region of megalin contains cysteine-rich repeat motifs, divided into three classes: ligand-binding class A, EGFlike class B.1, and growth factor class B.2. There are 36 ligandbinding motifs, 1 EGF motif, and 15 growth factor motifs [5]. The 36 class A motifs are arranged in 4 clusters, and except for the extreme N-terminus cluster, each class A cluster is flanked by a single B.2 motif at its N-terminus and two B.2 motifs at its C-terminus [5]. The remaining 4 B.2 motifs are contained within the YWTD repeat spacer regions that separate the four class A/B.2 clusters. A single B.1 motif is located in the extracellular juxtamembrane region. The cytoplasmic tail (209 amino acids) of megalin contains two coated-pit internalization signal motifs [F(X)NPXY], several SH3 and SH2 motifs for docking of signal molecules [5], and a constitutive phosphorylation site for glycogen synthase kinase-3 (PPPSP motif), which negatively regulates megalin recycling [6]. Intramembrane proteolysis of the C-terminal fragment by gamma-secretase, yields a soluble megalin intracellular domain that may regulate proximal tubule gene expression [7,8].

We have recently reported the novel finding of megalin in the mitochondria [24]. In addition to the mitochondria of native kidney tubular epithelial cells and cultured cells of kidney origin (HEK293T), we detected megalin in the mitochondria of mesenchymal cells including murine macrophagelike Raw264.7 and muscle C2C12 cells [24]; mitochondrial localization of megalin is also found in cells of many tissues/organs surveyed, including the stomach, intestine, lungs, liver, spleen and hippocampus [24]. In the mitochondria, megalin exists in association with stanniocalcin-1 (Stc1) and Sirt3. These associations suggest an important role for megalin in mitochondrial functions related to these proteins. SIRT3 localizes to the inner mitochondrial membrane and matrix; it reduces ROS through nicotinamide adenine dinucleotide (NAD)+-dependent deacetylation of lysines on substrates involved in biosynthetic pathways such as glucose and fatty acid metabolism and the tricarboxylic acid (TCA) cycle, oxidative stress, and apoptosis [25]. STC1 is a mitochondrial intracrine [3], with binding affinity to the plasma membrane and inner mitochondrial membrane [26]. STC1 activates the metabolic sensor AMPK, which in turn upregulates mitochondrial uncoupling proteins (UCPs) and SIRT3 to promote mitochondrial anti-oxidant defenses [27]. Hypoxic preconditioning induces STC1 expression in the heart [28], and brain [29], while transgenic overexpression of STC1 confers resistance to ischemia/reperfusion (I/R) kidney injury [30]. Thus, through association with STC1 and SIRT3, megalin may play an important role in the regulation of mitochondrial antioxidant defenses and cytoprotection. Finally, KO of megalin in cultured cells diminishes glycolytic and respiratory capacities, suggesting that megalin is critical for mitochondrial function and cellular metabolism, either directly or indirectly [24]. 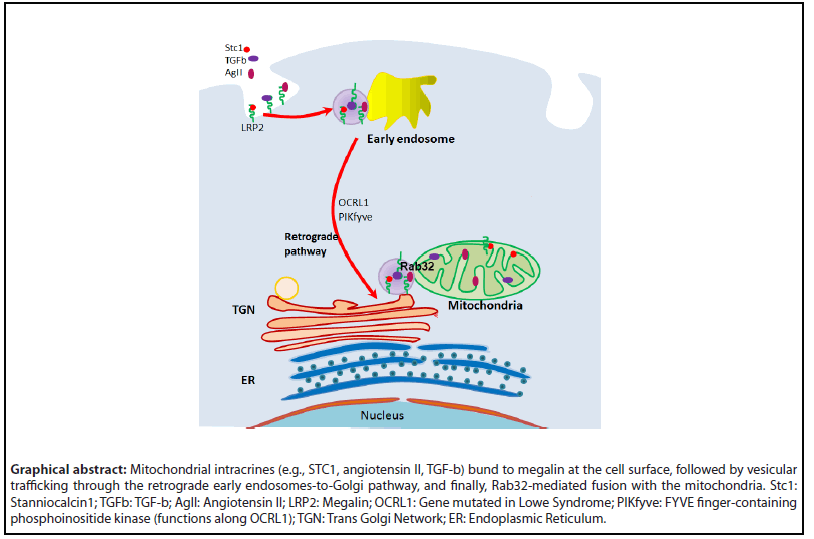 While the retrograde transport pathway is well-characterized [34], only few cargo proteins are known to traffic along the retrograde pathway; these include the transferrin receptor, mannose 6-phosphate receptor, GLUT4, Atg9, EGFR, some toxins (Shiga, Cholera, Ricin) and viral particles (HIV-1 Nef and Env, AAV5) [34], raising the question of whether this elaborate and evolutionarily conserved pathway evolved to serve as a conduit for viruses and toxins. Rather, it is highly likely that this pathway serves fundamental biological processes and is being subverted by toxins and viruses for entry into the cell. Because of commonalities between the mitochondrial intracrine shuttling pathway (megalin; retrograde early endosome to Golgi pathway) and molecular/trafficking defects characteristic of Donnai-Barrow (megalin mutations) and Lowe (OCRL gene mutations, and trafficking defects along the retrograde early endosome to Golgi pathway) syndromes, we propose that: A) the retrograde early endosome-to-Golgi pathway may in fact serve as a mitochondrial intracrine signaling route; B) the pathogenesis of Donnai-Barrow and Lowe syndromes may be linked to defects in mitochondrial intracrine signaling/ function.

As mentioned above, a number of cytokines and modifiers of inflammation are among the mitochondrial intracrines [3], suggesting that cytokines may play a role in regulating mitochondrial functions. Similarly, megalin has been implicated directly or indirectly in regulating inflammation and immunity. In vivo and in vitro studies suggest an important role for megalin as a transducer of tubulointerstitial nephritis in a model of protein overload [35]. Rats loaded with albumin exhibited increased megalin expression, and megalin silencing resulted in inhibition of IL-1β, IL-18 and cleaved caspase-1 [36]. IL-4 appears to provide protection from protein overload-mediated (megalin-facilitated) tubulointerstitial injury, and knockout of interleukin-4 resulted in decreased megalin expression and higher proteinuria [37]. These findings suggest a dynamic relationship between proximal tubule cell megalin and inflammation in proteinuric renal disease. In addition to the interaction with cytokines, megalin/ cubulin are responsible for the uptake of filtered nephrotoxins (e.g., aminoglycoside antibiotics, cisplatin, etc.); in doing so, they play critical roles in the development of certain types of acute kidney injury [38]. Conversely, megalin/cubulin also mediate the uptake of vitamins/nutrients (e.g., retinol, B12, vitamin D, lipoproteins, etc.) and cytoprotective molecules (e.g., selenoproteins, defensins, etc.) [38]. Thus, modulation of megalin/cubulin expression may be an important component of cell adaption to injury, as well as protection from- and regeneration after injury [38]. In the remaining paragraphs, we will focus on few mitochondrial intracrines because of the unique opportunities to further elucidate their roles in mitochondrial function; these include, vit D, components of the renin/angiotensin system and sex hormones.

Hydroxylation of vitamin D to the activated form occurs to a large extent within the proximal tubule, in a manner that is dependent on megalin/cubilin-mediated endocytosis [39]. Nykjaer et al. reported in a study of megalin-knockout mice that the few mice surviving to adulthood exhibited severe vitamin D deficiency and bone disease due to failure in proximal tubule reabsorption of 25-(OH) vitamin D and its binding protein [40]. Similarly, mice with kidney tubular epithelium knockout of megalin develop hypocalcemia and osteomalacia due to lack of vitamin D [41]. The role of megalinmediated vitamin D uptake was subsequently demonstrated in vitro in a human proximal tubule model [42]. Given that 25-hydroxy-vitamin D-1α-hydroxylase (CYP27B1, P450C1-α) is a mitochondrial enzyme [43], we propose that megalin may shuttle 25-hydroxy-vitamin D with its binding protein to the mitochondria, where the 1α hydroxylation of 25-hydroxyvitamin D occurs. Vitamin D receptor (VDR) is found in the mitochondria as well, and recent evidence suggests that vitamin D receptor regulates mitochondrial respiration and ATP generation in C2C12 myoblasts [44]. Changes in LRP2 expression across various types of human nephropathy are heterogeneous [45], but given the conclusive role for megalin in vitamin D uptake, disease specific changes in megalin expression likely impact mineral-bone metabolism.

Megalin mediates endocytosis of sex hormone (in complex with sex hormone binding protein) in reproductive organs such as testis and ovary; mice with megalin knockout demonstrated failure of sexual development [48]. Vitamin A with retinol binding protein, as well as transcobalamin/vitamin B12 complexes, are transported intracellularly via endocytosis by megalin [49]. Kidney-specific knockout of megalin in mice resulted in loss of retinol in the urine, indicating a role for megalin in maintaining systemic vitamin A levels [50].

In summary, megalin shuttles signaling molecules from the cells surface to the mitochondria via the retrograde early endosomes-to-Golgi pathway and Rab32. Megalin knockout impairs mitochondrial respiration and glycolysis. These findings provide insight into previously unknown functions for megalin and provide new opportunities for research into the actions of megalin-mediated hormonal shuttle to the mitochondria.

This work was supported by grants from: The Veteran Administration [BX002006]; and a generous gift from Dr. and Mrs. Harold Selzman.