Deformation of Nanoglass under High-pressure Torsion

Copyright: © 2022 Dong Y, et al. This is an open-access article distributed under the terms of the Creative Commons Attribution License, which permits unrestricted use, distribution, and reproduction in any medium, provided the original author and source are credited.

The local atomic structure of metallic glasses can be modified, and their physical properties can be improved by high-pressure torsion (HPT). In this article, some recent investigations are presented that reveal the HPT treatment effect on nanoglass (Zr55.7Ni10Al7Cu19Co8.3) based upon the appearance of shear bands in the HPT treated nanoglass. The residual stress rises, leading to an increase in the nanoindentation hardness. With the evolution of the free volume, the plasticity of the nanoglass is improved by HPT, exhibiting a tensile plastic strain of 0.9%. Multiple shear bands can be observed on the surface during the tensile test, and crack propagation is suppressed in HPT-treated nanoglass. Many shear bands branch and interact with each other at the tip of the cracks thus avoiding brittle behavior.

Metallic glasses are amorphous solids with metallic atomic bonds. Different from traditional crystalline metals, they have no long-range atomic order. Only short-range order on the scale of 0.5–1 nm can be detected [1-4]. Because of the lack of a lattice dislocation slip system, as in crystalline alloys, metallic glasses exhibit some outstanding properties, such as high elastic strain, high hardness and high strength [5-7]. The yield strengths of Zr-based bulk metallic glasses (BMGs) are approximately 2 GPa in compression. Unfortunately, this special structure also creates problems; that is, plastic deformation in BMGs is always concentrated in localized regions, namely, shear bands, resulting in catastrophic failure [8]. This brittleness restricts their industrial applications. Zr64Ni10Al7Cu19 is a BMG system [9,10] with good glass forming ability and high strength but no plastic strain under tensile testing.

Considerable studies have been performed to find a way to improve the ductility of BMGs. Limiting the propagation of shear bands is a key issue [9-12]. Recently, nanoglasses, which are amorphous solids consisting of nanometer-sized glassy regions connected by glass/glass interfaces, were reported [12-15]. Such nanoglasses could have new features; e.g., (1) denser glassy particles could hinder the propagation of shear bands that act as second phase strengthening; and (2) an enhanced free volume due to the misfit between the atoms at the boundaries between glassy particles could lead to the formation of more shear bands.

High-pressure torsion (HPT) is a severe plastic deformation technique for refining grains in polycrystalline materials [15]. Recent studies have shown that in BMGs, free volume can be enhanced by HPT, which is known as rejuvenation [16]. As a result, the velocity of shear band sliding is reduced [17], and the ductility can be improved [1]. These effects are also accompanied by the development of residual stress because of inhomogeneous plastic flow (deformation with a strain gradient) [18]. Therefore, it is of interest to perform a systematic study of severe plastic deformation (HPT) on nanoglass.

Synthesis and Structure of Nanoglass

As introduced above, compared with BMGs, nanoglasses could have improved properties. Several methods have been developed for nanoglass synthesis. Inert gas condensation was first investigated [26,27]. Nanoscale glassy clusters are evaporated from the target material into an inert gas atmosphere (helium) and then consolidated under vacuum. Magnetron sputtering is another method for nanoglass preparation. A negative potential is applied to a target, acting as a cathode. Atoms in the sputtering target are ejected by the collision of Ar+ ions and are deposited on a substrate, forming a nanoglass thin film [28]. Phase separation is a newly developed method by adding elements (such as Co) with a positive enthalpy of mixing [1]. With a particular chemical composition, nanoscale phase separation can take place in glassy structures by water-cooled copper-mold casting. Compared with inert gas condensation and magnetron sputtering, nanoglasses synthesized by the phase separation method have a large size (on the millimeter scale), making HPT treatment possible.

In this work, the Zr64Ni10Al7Cu19 system was selected because of its good glass forming ability [19]. Cobalt was then added to partially replace zirconium. The positive enthalpy of mixing between cobalt and copper (6 kJ/mol) constitutes the driving force for nanoscale phase separation. Transmission electron microscopy (TEM) analysis of the as-cast Zr64Ni10Al7Cu19 and Zr55.7Ni10Al7Cu19Co8.3 samples is shown in Figure 1. Electron diffraction halos confirm the amorphous structure of both samples. Nanometer-scale glassy clusters are clearly detected in the as-cast Zr55.7Ni10Al7Cu19Co8.3 sample. HPT treatments have been applied on this sample. 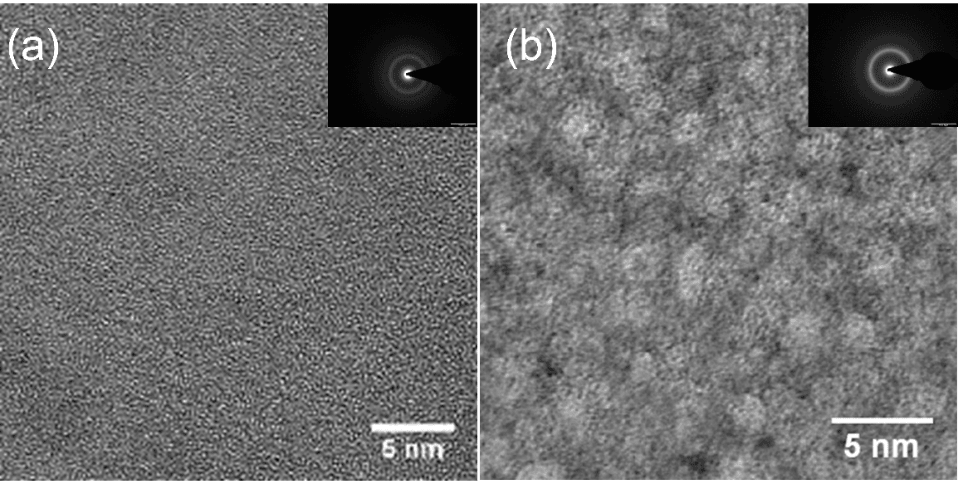 The as-cast Zr55.7Ni10Al7Cu19Co8.3 nanoglass samples show good HPT deformation capabilities. No cracks were detected in the severely plastic deformed HPT-treated samples. The shear strain γ can be calculated through where h is the initial thickness of the sample (0.4 mm), R is the distance from the sample center, and N is the number of rotations (2, 5, 10, 20). X-ray diffraction (XRD) patterns of all HPT-treated samples are shown in Figure 2. In addition to the broad diffraction peak, no sharp peaks from crystalline phases are observed for all samples. However, the TEM images in Figure 3 reveal that two rotations of HPT changed the structure of the Zr55.7Ni10Al7Cu19Co8.3 sample. Nanometer-scale crystalline particles appear as bright points in the dark-field image in Figure 3c. The content of nanocrystalline particles is small, most likely less than 1%, so that they cannot be detected by XRD. Shear bands induced during HPT treatment can also be observed in the TEM images (dark lines in the dark-field image, marked by arrows, Figure 3c). 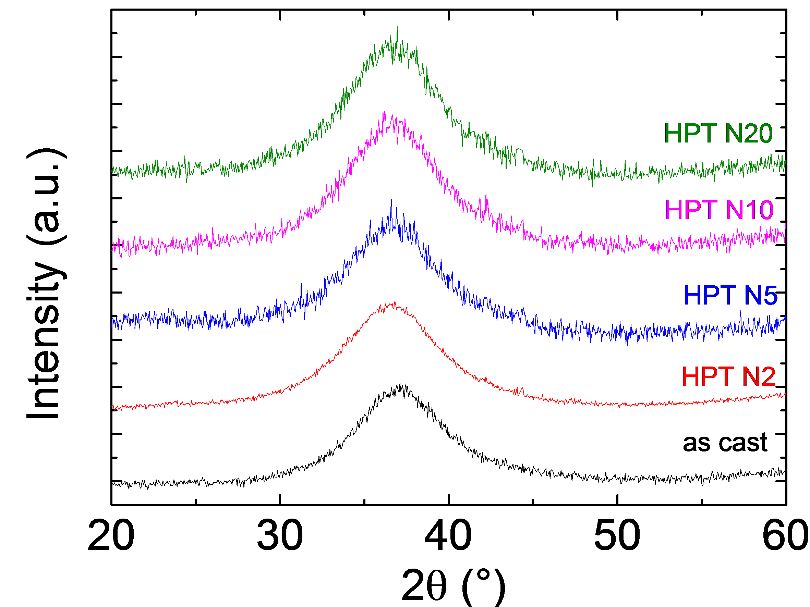 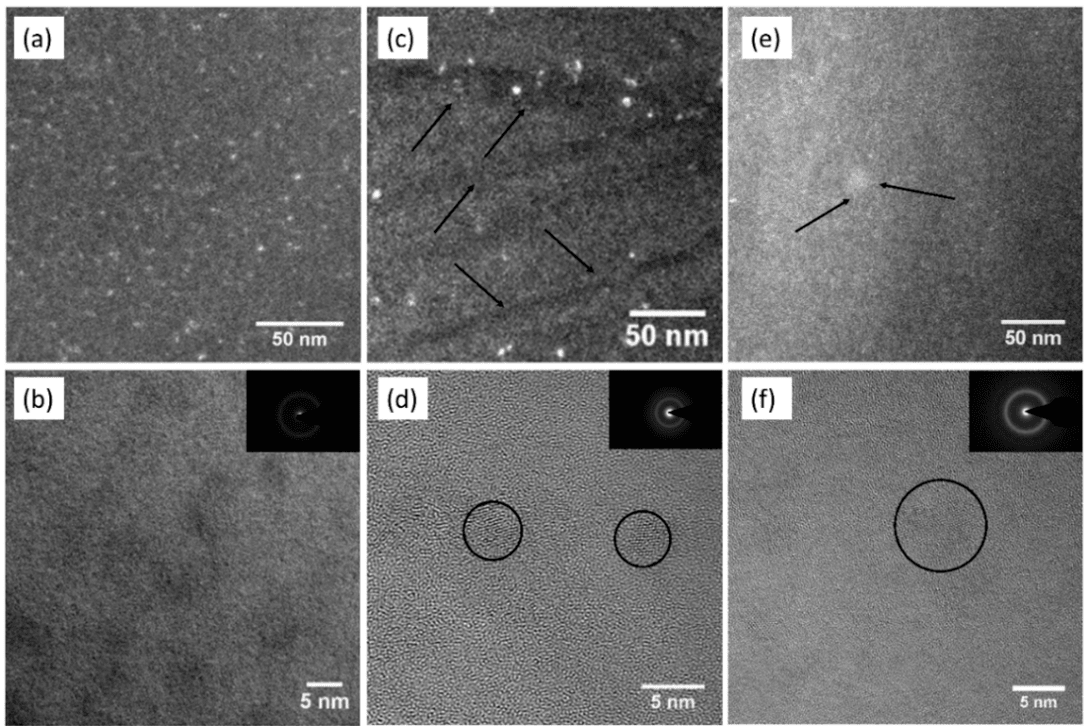 Differential scanning calorimentry (DSC) measurements were also performed for as-cast and HPT-treated nanoglass samples. Zr55.7Ni10Al7Cu19Co8.3 nanoglass exhibits a two-step crystallization at 701 K and 794 K, which most likely results from the phase separation in the samples. HPT treatments do not affect the crystallization processes with no detectable change in Tg, Tx or crystallization enthalpy, as shown in Figure 4a. However, interesting changes take place in the relaxation processes prior to Tg (Figure 4b). After two rotations of HPT, more energy release during relaxation is observed, indicating a release of enhanced free volume. By further increasing the rotation number (N=5, 10, 20), the free volume decreases further. This decrease could be due to heating and/or mechanical annealing effects during plastic deformation [20].

Figure 5 (a) shows the radial distributions of the nanoindentation hardness values of the as-cast state and HPTtreated (N=2, 5, 10, 20) Zr55.7Ni10Al7Cu19Co8.3 samples. In the central region (0-500 μm from the center), there is a relatively small increase of the hardness after HPT treatments of about 3%. In the outer region (500-3500 μm from the center), the hardness of the treated sample increases from 5.9 ± 0.1 to 6.3 ± 0.1 GPa. As reported in [18], the residual compressive stress is aligned parallel to the radial direction introduced by the disk material flow during HPT deformation [21]. The Young’s modulus radial distributions of the as-cast and HPT-treated Zr55.7Ni10Al7Cu19Co8.3 samples are shown in Figure 5b. After HPT treatment, the Young’s modulus of the nanoglass increases from 84 ± 2 to 92 ± 2 GPa, i.e. about 10% [22].

Unlike compression, metallic glasses have zero ductility under tensile loading. A load-displacement curve and scanning electron microscopy (SEM) images can be obtained at the same time during the in situ tensile testing performed within the SEM chamber test. The tensile stress–strain curves of the as-cast and HPT-treated Zr55.7Ni10Al7Cu19Co8.3 nanoglasses are shown in Figure 6. Similar to the results reported in other publications [23-25], the as-cast metallic glasses show almost no plastic strain during the tensile test. However, after HPT for two rotations, the ductility of the Zr55.7Ni10Al7Cu19Co8.3 nanoglass sample is improved significantly. Its tensile plastic strain reaches almost 1.0%, which is significantly improved in comparison with untreated monolithic metallic glasses. From the serrated plastic deformation plateau on the stress–strain curve, it might be deduced that more than one major shear band initiated during the tensile test. However, the plastic strain of the treated samples decreases again when the HPT increases to 5-20 rotations. As discussed above, the reason is the variation in free volume. An excessively large deformation degree might facilitate a temperature rise in the sample, leading to free volume annihilation in the structure. 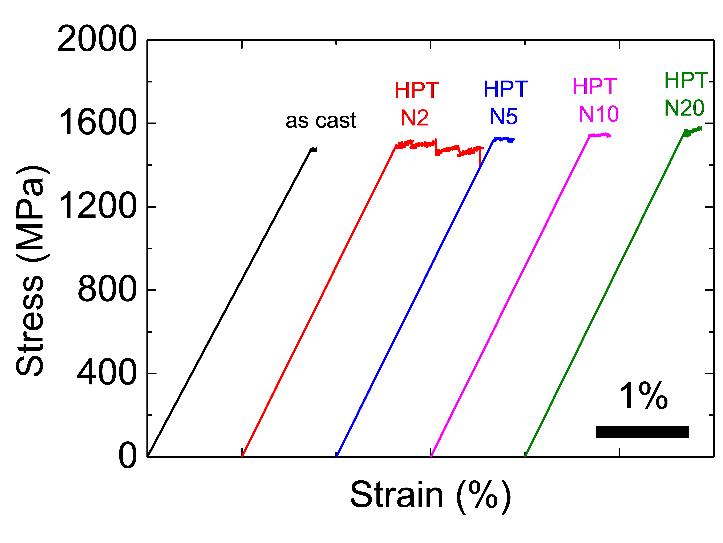 The initiation and evolution of shear bands on the sample’s surfaces during tensile deformation were also observed by in situ SEM measurement. The images in Figure 7 exhibit the surfaces of the as-cast and HPT-treated nanoglass samples under yield stress loading conditions. Figure 7a shows that two major shear bands cut through the surface of the as-cast Zr55.7Ni10Al7Cu19Co8.3 sample, with a few shear bands on the side. The deformation is concentrated within the major shear bands. Unlike the compression process with restricted load, this shear band easily extends to a crack under tension, which leads to very rapid catastrophic fracture after yielding. The two-rotation HPT-treated Zr55.7Ni10Al7Cu19Co8.3 sample shows the best ductility. Multiple shear bands can be observed on the surface with an orientation perpendicular to the tension direction (Figure 7b), resulting in large plastic strain. Further increasing the HPT rotation number (5-20) reduced the number of shear bands (Figure 7c) because of the annihilation of free volume in the structure and the plasticity of the samples is reduced.

Finite element analysis of the tensile tests on nanoglass has been done by Mo Li et al. [30]. It shows that, in the heterogeneous structure, initial deformation started at the soft regions, continuing to be localized around their original location. When localized regions have finally developed, the deformation bands do not look smooth and straight, rather rugged and zigzag with many side bands. The localized deformation zones are spread more widely, resulting in improved plasticity [30]. This simulation is coincident with the experimental results as shown in Figure 7.

Figure 8 illustrates the SEM images for crack tips on two rotations of HPT-treated Zr64Ni10Al7Cu19 BMG and Zr55.7Ni10Al7Cu19Co8.3 nanoglass samples just before fracture. It is clear that on the treated Zr55.7Ni10Al7Cu19Co8.3 nanoglass, many shear bands branch and interact with each other at the crack tip (Figure 8b), which cannot be detected on the treated Zr64Ni10Al7Cu19 BMG (Figure 8a). In this treated nanoglass, the crack tips reached the HPT–introduced pre-existing shear bands during propagation, resulting in the formation of newly formed shear bands. The propagation of the newly formed shear bands is inhibited again by branching and intersection [29,31]. Thus, the localized plasticity is improved significantly [2].

Nanoscale crystalline particles (about 1 vol%) and shear bands form in the nanoglass (Zr55.7Ni10Al7Cu19Co8.3) during HPT. The free volume in the structure is increased by two rotations of HPT. Nanoindentation analysis shows that the hardness of the outer region (500-2500 μm from the center) is increased about 10% by HPT, indicating an increase in residual compressive stress. The localized tensile plasticity of the nanoglass is improved by two rotations of HPT treatments, and its tensile plastic strain reaches about 1%. The reason is the increased free volume and pre-existing shear bands introduced by the two rotations of HPT. During tensile deformation, multiple shear bands form on the tip of cracks; they branch and interact with each other, enhancing the ductility. With this improved property, the HPT treated nanoglass could have large application potential.

The financial support of DLR (50WM2143) and fruitful discussions with Prof. H. Gleiter and Dr. A. Haghighiradare in KIT are gratefully acknowledged.