Nanotechnology in Water Treatment: An Optimistic Perspective for the Near Future

Copyright: © 2021 Praun Pereira BM, et al. This is an open-access article distributed under the terms of the Creative Commons Attribution License, which permits unrestricted use, distribution, and reproduction in any medium, provided the original author and source are credited.

Due to water scarcity and the growing disputes over this vital supply, alternatives for the decontamination and reuse of water are among the most requested technologies to solve those problems. Nanotechnology can significantly contribute to the evolution of these devices since nanoscale materials have mechanical, catalytic, even antimicrobial properties that increase the effectiveness of decontamination, filtration and desalination processes, which will be addressed in this article.

Unequal access to drinking water and basic sanitation are old issues in Brazil and worldwide [1,2]. Besides, this situation foments the proliferation of infectious parasitic diseases. Moreover, mainly in underdeveloped countries, it victimizes socioeconomically vulnerable people [3,4]. The degree of water contamination analysis, usually by fecal matter, is made by the number of microorganisms present in the sample, including Escherichia coli or thermotolerant coliforms [5]. In addition, several other bacteria, protozoa, viruses from water contaminated by fecal waste causes serious diseases that lead to infant mortality rates in Africa and Southeast Asia [6,7].

The bacterium Escherichia Coli is mainly associated with untreated domestic sewage and the carrying of animal feces. This pathogen lodges in the intestinal tract, promoting hemorrhagic colitis that can be lethal [8]. On the other hand, the bacteria Staphylococcus aureus settles on the skin and nasal fossae, causing simple skin infections to severe ones such as pneumonia, meningitis, endocarditis, etc. [9]. The protozoa, often present in water contaminated by fecal waste, are Giardia intestinalis and Cryptosporidium. The first has part of its life cycle in the host’s intestine, which contains two phases of trophozoites and viable cysts, contaminating the water. The infection ranges from asymptomatic, moderate to severe. The second protozoan, also from an aquatic life cycle, is transmitted by its oocysts, which have high resistance to adverse conditions of the environment [10]. Inside the host’s body, it attaches to epithelial cells of the gastrointestinal tract, compromising the intestinal mucosa, consequently inducing malabsorption and diarrhea [11].

Moreover, some viruses are spread by contaminated water, such as adenovirus, hepatitis-type A, E - [12], and viruses from the family Caliciviridae. Adenoviruses can selectively infect a predetermined number of cells (viral histotropism). Although it can be asymptomatic, it can provoke intestinal, urinary, and respiratory infections [13].

Hepatitis A and E are transmitted mainly via the fecaloral route from contaminated water. The hepatitis A virus’s replication occurs in the liver. After being released by the gallbladder, it infects the digestive system, bringing fever, abdominal pain, vomiting, and diarrhea [14]. The hepatitis E virus of the Hepeviridae family causes light and limited hepatitis. However, it can be aggravated to a severe clinical condition when contracted by pregnant women or immunodeficient people [15,16]. The most common viruses of the Caliciviridae family are Norovirus and Sapovirus, which infect humans. Both replicate in the intestinal tract and induce symptoms discussed above [17].

Those severe and neglected diseases must be considered when it comes to the mismanagement of water resources and its consequences. Given the above, practical and economically viable alternatives are increasingly needed to provide treated water.

The Reuse of Rainwater

Although it must follow rigorous criteria that ensure portability, its sanitary safety rules are more flexible, water is used for cleaning or irrigation when intended for consumption. In this case, catchment and reuse of rainwater is a viable alternative [18]. A practical example, applied in Brazil, of the direct capture of rain, not contaminated from surface runoff, is the national program to support the rainwater collection and other social technologies (called cistern program) created by the Brazilian Ministry of Citizenship [19].

Urban effluents must go through the decontamination process, carried out by sewage treatment systems before being disposed of since organic matter and pollutants can cause lots of environmental damage [20]. This process consists of the retention of macroscopic dimensioned solids, followed by sand removal through sedimentation. After that, pH neutralization, flocculation, and decantation phases coagulate and sediment the pollutants. Then, the liquid phase of the surface goes to the next stage. Finally, occurs the disinfection of the effluent, promoting the decomposition of organic matter and oxygenation through sanitizing chemicals and biological treatment [21]. Subsequently, others processes allow the reuse of nonpotable effluent, which involves filtration, chlorination, etc. [22,23]. Therefore, it is necessary to optimize and increase technology’s efficiency to promote water reuse and intelligent management in this perspective. Thus, nanotechnological materials come as an answer to this demand regarding their properties [24].

Use of Nanotechnological Tools in Water Treatment

The antimicrobial effect of many nanostructures is, above all, due to the highly reactive character. The nanometric scale dimensions suggest an excellent ratio between surface and volume, hence more significant interaction with bacterial and fungal cells [25]. Silver nanoparticles (AgNPs), in gram-negative bacteria, Ag+ ions interrupt and compromise the respiratory chain [26,27]. In this context, the method and the synthesis conditions are essential for modulating their size and, consequently, their properties [28,29]. Besides, alternative routes are already known are sustainable and low cost, oxidizing silver ions in plant substrates.

Other nanoparticles in this bias are also evaluated, such as copper and zinc oxide, for delaying the development or elimination of microorganisms [27]. According to recent researches, this property can be applied to filtering technology, incorporating these particles in different substrates [30,31]. The results indicate that there is a promising future in the development of products based on this technology. However, it demands a better understanding of the mechanism in which inhibition occurs and against which types of microorganisms this is more efficacious [32].

TiO2-mediated photocatalysis consists of the generation of oxidation sites on their surface from radiation incidence and, consequently, inhibits microorganisms [33,34]. This technology can also oxidize organic compounds, such as industrial contaminants, being recognized for their low cost and non-toxicity. Furthermore, studies indicate that the use of this technique corroborated, under the conditions tested, the inactivation capacity of approximately 99% of the total coliforms in the residual water sample [33]. In another perspective, the use of TiO2is being evaluated for decontamination of industrial wastewater with some phenol concentrations [35].

The Use of Nanobiotechnological Membranes

The separation of contaminants by membranes has been widely used due to its optimized system, continuous operation, high selectivity, and its economic viability on a large scale [36,37]. Membranes can be distinguished by their symmetry, morphology, density, and porosity (Figure 1). Moreover, the separation process is classified by the direction of the filtration flow, as perpendicular or tangential. [36]. Initially, membrane use was aimed at desalination processes. Over time, those membranes were visible to be applied at the decontamination of effluents by pesticides. Further, some research groups are currently studying its potential to remove waste from industrial sectors [38]. 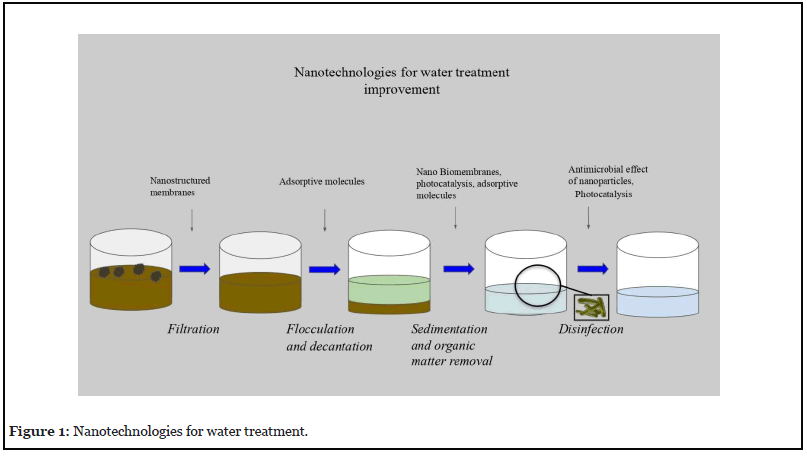 Nanofiltration is an example of this membrane separation technology which separates organic substances from immiscible solids in water using pressure or concentration gradient. The differential of this process is linked to the pore’s size, the retention capacity at the molecular level [37,39]. Therefore, nanofiber filters are also studied for this purpose. Usually, a second layer is deposited on a microfiber substrate such as glass fibers or cellulose [40].

Indeed, another application of nanobiotechnology would be the dynamic membranes associated with bioreactors, which effectively retain inorganic particles and organic matter, and their use is increasingly present in sewage treatment. The advantages of this system consist in the reduction of steps when compared to the traditional process. In addition, it has a better capacity to retain biomass and by helping in disinfection. There is a deposition of sludge layer and microorganisms in this type of membrane, constituting a biofilm (the membrane itself) on support, promoting the containment of particles and organic material [41].

Nanomaterials and Their Applications as Adsorbents

One of the most used properties of nanomaterials is adsorption, which consists of the ability of certain solids to concentrate liquid or gaseous substances on their surfaces to the point of separating them from other substances in the environment in which they are found [42]. Nanomaterials have been standing out at the water treatment based on the adsorption process due to their potential for cleaning water contaminated by industrial products. In addition, they are reusable and economically viable since there is a large surface area nanoscale in a small volume (Figure 2). This feature promotes the removal of the contaminant with a smaller amount of adsorbent. Thus, among its applications, nanomaterials turn out to be a worthwhile alternative for both wastewater treatment and the mitigation of environmental damage [43]. 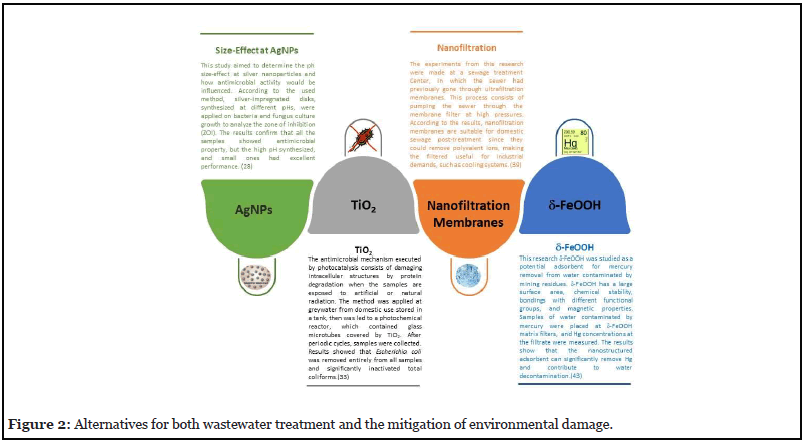 Functionalized carbon nanotubes have also been developed as adsorbents to heavy metals removal [44]. Another feature already researched of carbon nanotubes was is its potential use for the desalination process. A membrane was developed with a nanotube network in a porous matrix that performed sodium and chlorine ions’ retention in the study. [45,46]

The use of zeolites, better known in catalytic applications, also stands out because of their crystalline and porous structure. A significant surface area is applied as adsorbents of metallic particles and suitable for nanofiltration [47,48]. Research whose results point to removing 99% of aluminum and iron from a sample of water contaminated with residues from the mining activity indicates that zeolites are likely beneficial to treat effluents from some industrial sectors [49].

Other studies also point to the potential of other nanostructures with this property, such as graphene oxide. Through the oxygenated radicals present in its structure, it can interact with organic compounds and metal ions. Therefore, graphene oxide magnetic composites are also being researched to promote the recovery and reuse of this adsorbent [29,50].

Overall, it is clear that there are several nanotechnology’s contributions to water treatment, aiming at sustainability and low cost. Although there are still obstacles to their widespread use, such as the difficulty of scheduling and the investment required, alternatives showed in this article are continuously being improved. Thus, it is important to highlight their possible contribution in the long term to the spread of access to basic sanitation, reducing the proliferation of diseases related to drinking contaminated water, and improving water resource management.