Copyright: © 2022 Kuhn MJ, et al. This is an open-access article distributed under the terms of the Creative Commons Attribution License, which permits unrestricted use, distribution, and reproduction in any medium, provided the original author and source are credited.

Gadolinium-based contrast agents (GBCAs) work by shortening the T1, T2, and T2* relaxation time constants of adjacent water protons in tissues. The greater the T1 shortening the greater the signal enhancement obtained on T1-weighted images. The extent to which T1 is shortened, and hence the effectiveness of a specific GBCA in clinical practice, depends on the local tissue concentration of the GBCA and on its specific r1 relaxivity. The higher the r1 relaxivity of the GBCA the greater the extent to which T1 is shortened and the greater the signal enhancement obtained. This means that for a given equivalent approved GBCA dose of 0.1 mmol/kg bodyweight, a GBCA with higher relaxivity will improve the visualization of lesions and potentially allow better detection of small or poorly enhancing lesions compared to that achieved with GBCAs having standard relaxivity. Alternatively, a reduced dose of higher relaxivity GBCA can be used to achieve similar contrast enhancement to that achieved with standard relaxivity GBCAs at higher dose, resulting in equivalent diagnostic efficacy with reduced amounts of injected gadolinium (Gd). The benefits of higher relaxivity for surgical decision making, particularly for intra-axial brain tumors (i.e. gliomas and metastases) whose viable tumor margins often extend beyond those seen on T2- weighted images and T1-weighted images enhanced with standard relaxivity GBCAs, have been discussed previously [1]. Likewise, previous studies have highlighted the benefits of higher relaxivity for GBCA dose lowering for enhanced MRI applications in the CNS [2-7].

Given the above considerations, higher relaxivity is clearly advantageous in clinical practice, assuming similar GBCA safety profiles. Currently, the GBCAs most widely used in the USA and elsewhere for MRI applications, including those in the CNS, are GBCAs belonging to group II of the American College of Radiology (ACR) manual on contrast media, version 2021 [8]. These are the substituted linear agent gadobenate dimeglumine [MultiHance; Bracco], and the macrocyclic agents gadobutrol [Gadavist; Bayer], gadoteridol [ProHance; Bracco], and gadoterate meglumine [Dotarem and generics; Guerbet; GE] (Figure 1). These GBCAs are associated with few, if any, unconfounded cases of NSF and all are approved for patients with chronic kidney disease (CKD) stages 4-5D. Reported relaxivity values for these agents vary slightly based on the experimental conditions under which they are determined [9-13] but in all cases MultiHance has the highest relaxivity, followed by Gadavist, ProHance and, finally, Dotarem, as illustrated in Figure 2. 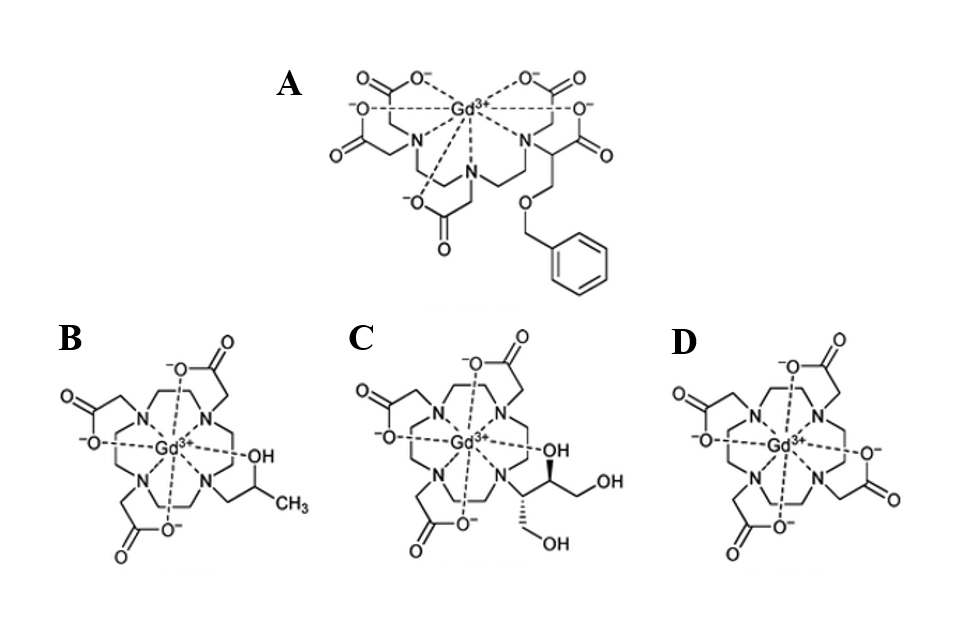 Figure 1: Molecular structures of (A) MultiHance, (B) ProHance, (C) Gadavist and (D) Dotarem/Clariscan. The higher r1 relaxivity of MultiHance (A) is due to the aromatic substituent on the gadobenate molecule which interacts with serum albumin thereby slowing the molecular tumbling rate and leading to a longer rotational correlation time with inner shell water protons which increases in the T1 relaxation rate. The similar size and molecular structures of the macrocyclic GBCAS (B, C, and D) results in only minimal differences in r1 relaxivity.

Figure 2: r1 relaxivity values of group II GBCAs as classified by the American College of Radiologists. Based on values reported in Shen et al. 2015 [12].

In the case of MultiHance, its higher r1 relaxivity derives from weak and transient interaction of the gadobenate contrasteffective chelate with serum albumin. This interaction results in a slowing of the tumbling rate of the gadobenate molecule, leading to a longer rotational correlation time with inner shell water protons and hence an increase in the T1 relaxation rate compared to that seen with GBCAs (including Gadavist, ProHance and Dotarem) that do not interact with serum albumin [14]. In comparison, the slight differences in r1 relaxivity seen amongst the macrocyclic GBCAs reflects only minor differences in molecular properties (primarily molecular size) that only minimally impact molecular tumbling and T1 relaxation rates.

Numerous intra-individual crossover studies that have compared MultiHance with other GBCAs for enhanced MRI of the CNS have unequivocally and unanimously demonstrated significantly improved contrast enhancement and imaging performance for MultiHance [4,15-18]. Conversely, intraindividual crossover studies that compared Gadavist with other macrocyclic GBCAs have produced conflicting findings with some authors reporting significantly better enhancement and imaging performance with Gadovist compared to comparator agents [19-21] while others, comparing the same GBCAs under identical conditions, reported similar or non-inferior imaging performance for the comparator GBCA compared to Gadavist [22,23]. Invariably, authors that report better imaging performance with Gadavist [19-21] ascribe the stated benefits to the two-fold higher concentration of the Gadavist formulation and to higher r1-relaxivity of the gadobutrol molecule.

Whereas MultiHance is clearly a “high relaxivity” GBCA compared to other currently available GBCAs, the conflicting findings for Gadavist raise questions as to whether this GBCA should also be considered a “high relaxivity GBCA” as some authors have described it [24,25]. As stated by Kanal et al [26]: ““High relaxivity” should be defined not numerically alone, but rather by an objectively proved ability of an agent to deliver increased clinical utility as measured by clinically relevant increases in signal enhancement (rather than merely small but statistically significant signal increases) or, preferably, an objectively measured increase in lesion number or lesion extent compared with other “standard” GBCAs.”

Until recently, all intra-individual crossover comparisons of GBCA performance have utilized a subjective approach to image evaluation in which contrast enhancement and efficacy determinations are based on the subjective assessments of blinded readers. Thus, qualitative assessment of images (e.g., of lesion border delineation, disease extent, visualization of lesion internal morphology, lesion enhancement compared with surrounding normal tissue) have typically been performed by three experienced readers in blinded fashion and scored using 3-point Likert scales (e.g., from –1 [examination 1 superior] through 0 [examinations equal] to +1 [examination 2 superior]). Likewise, quantitative evaluations have relied on the subjective placing of regions-of-interest (ROI) on homogenous areas within lesions and normal brain tissue that avoided vessels, necrotic areas and other visibly inhomogeneous structures or artifacts. Although image randomization and anonymization as well as strict care in the evaluation of images may help to overcome many potential issues related to subjective nature of image assessment, these strategies do not help to overcome the inherent limitations of the human visual system which is not designed to easily identify differences between images when compared side-byside. Because the human visual system works in abstractions, it suppresses our sensitivity to differences when images are displayed side-by-side. As demonstrated recently [27], new artificial intelligence/machine learning (ML) software provides opportunities to look at enhancement characteristics quantitatively, in an entirely objective manner, enabling greater clarity, reliability, and reproducibility of interpretations.

Unlike traditional quantitative analysis which relies on volumetric assessment of voxels in a given ROI (i.e., by simply calculating the number of voxels in the user-defined ROI), the dedicated AI software (“Change Detector”; A.I. Analysis, Inc.) described in detail previously [23] utilizes multiple forms of artificial intelligence (expert systems, fuzzy logic)/ machine learning (genetic algorithms) in concert to construct Quantitative Enhancement Maps (QEM) in which imaging features unrelated to GBCA-induced enhancement are separated from features that indicate enhancement. Once an initial ROI is positioned to encompass the entire lesion(s), the software performs a pipeline of processing steps on the pre-contrast and contrast-enhanced T1-weighted images from each paired data set corresponding to each patient. By making calculations of enhancement in nuanced terms (i.e., by rating the degree of enhancement within each voxel automatically and reproducibly on a fuzzy membership scale of 0.0 [nonenhancing] to 1.0 [maximally enhancing]), the Quantitative Enhancement Analysis (QEA) system provides a per-ROI sum of enhancement that is not only an expression of the spatial extent of an enhancing region but also the degree of enhancement within that region. Comparison of the QEM for an acquisition made with one GBCA with the QEM for an acquisition made with another GBCA permits accurate interpretation of the differential enhancement achieved with different GBCAs. Since the QEMs have reproducibly rated the degree of enhancement on a voxel-by-voxel basis throughout both acquisitions using a 0.0 (no enhancement) to 1.0 (maximal enhancement) scale, this is accomplished simply by subtracting one QEM (from the first agent) from the other QEM (from the other agent) providing a quantitative map of the differences in enhancement on a voxel-by-voxel basis on a scale of -1.0 (greatest possible decrease in enhancement from agent A to agent B) to 0.0 (no difference in enhancement between agent A and agent B) to +1.0 (greatest possible increase in enhancement from agent A to agent B). This map of differences in enhancement can be displayed as a standalone volume or superimposed as a color map on another volume.

Figures 3 and 4 show representative examples of cases from published intra-individual crossover comparisons of MultiHance versus Gadavist [18] and ProHance versus Gadavist [22] for brain tumor imaging. In Figure 3, the greater enhancement achieved with MultiHance is evident not only from the QE change map in which color highlights regions that differ in enhancement between the two exams, but also from the Bland-Altman chart in which the median difference in signal enhancement is clearly outside the equivalence zone indicating greater signal enhancement on the MultiHanceenhanced image. The Nonparametric Two One-sided Test of Equivalence for Paired Samples (NPAR) test [28] fails to detect equivalence (p=1.0, p<0.001), while Wilcoxon’s rank sum test detects a difference (p<0.001) that is clearly clinically relevant (median difference = -0.093). Conversely, in Figure 4 only minimal color is apparent on the QE change map indicating only minimal differences in signal enhancement. The NPAR test indicates that there is sufficient evidence to indicate equivalence within the parameters of the Zone of Equivalence shown (-0.05 to +0.05 enhancement) (p<0.001, p<0.001). The Wilcoxon rank sum test indicates a statistically significant difference (p<0.001) presumably due to the large number of samples (N=47,960). The median difference (0.001) lies within the Zone of Equivalence, indicating that this difference is not clinically relevant. Thus, we conclude that the contrast enhancement generated by the two agents in this case is clinically equivalent. 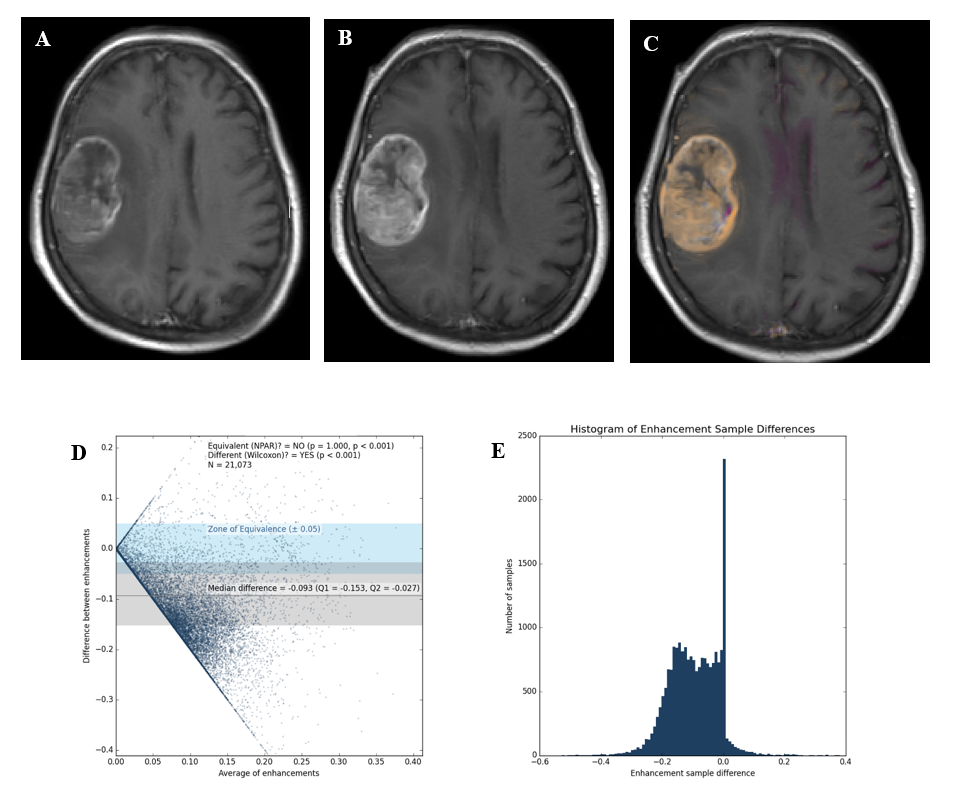 Figure 3: Female, 76 years of age, 61 kg, with facial paresis and a high-grade glioma imaged with a Philips Achieva 1.5 T scanner. Conventional T1-weighted spin-echo contrast-enhanced MR images for exams with 6.3 mL Gadavist (A) and, after 4 days, 12.2 mL MultiHance (B). Substantial color on the QE change map (C) indicates marked differences in enhancement between the two exams. This is confirmed on the Bland-Altman chart (D) in which the median difference in signal enhancement is clearly outside the equivalence zone. The histogram of enhancement sample differences (E) emphasizes that a large majority of voxels possess improved enhancement for MultiHance. 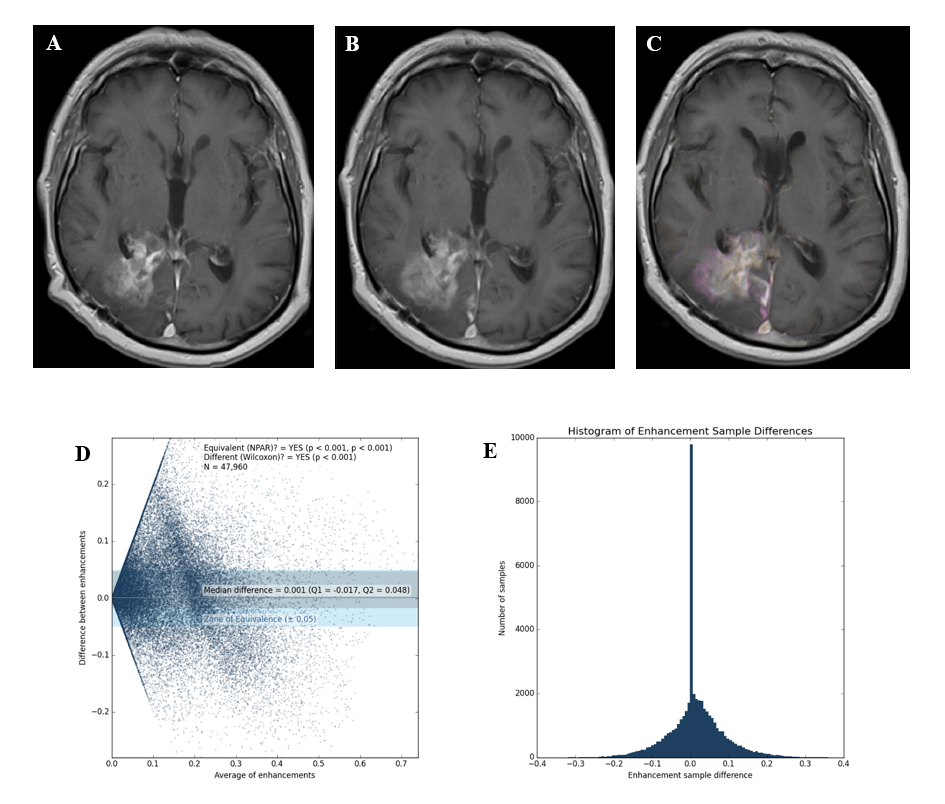 Figure 4: Male, 67 years of age, 90 kg, with bronchogenic carcinoma and anaplastic astrocytoma grade III, blurred vision, mild left sided hemiparesis and previous brain surgery (post-operative assessment) imaged with a Siemens Avanto 1.5 T scanner. Conventional T1- weighted spin-echo contrast-enhanced MR images for exams with 9 mL Gadavist (A) and, after 2 days, 18 mL ProHance (B). The color on the QE change map (C) indicates only minimal differences in enhancement between the two exams which is confirmed on the Bland-Altman chart (D) in which the median difference in signal enhancement is clearly within the equivalence zone. The histogram of enhancement sample differences (E) demonstrates that enhancement differences between the two agents are within the level of noise and are not clinically relevant.

The importance of relaxivity as the key indicator of MR contrast agent efficacy has been demonstrated in numerous intraindividual comparative studies. The application of AI software can confirm and strengthen radiological results of properly designed and powered studies in demonstrating when numerical differences in relaxivity can be translated in clinical advantage, and when they cannot.