Copyright: © 2022 Ben Abdessalem H, et al. This is an open-access article distributed under the terms of the Creative Commons Attribution License, which permits unrestricted use, distribution, and reproduction in any medium, provided the original author and source are credited.

Alzheimer’s disease is a chronic progressive neurodegenerative disease which spreads increasingly. People with Alzheimer’s disease experience more negative emotions than healthy older adults. Non-pharmacological treatments such as animal therapy may be effective but are subject to certain limitations and requirements. We propose a Virtual Reality Zoo Therapy system in which the patients are immersed in a virtual environment and can interact with animals using their hands. The immersive experience of Virtual Reality allows patients to interact freely with animals and feel as if they are in a real therapy room. Two experiments with different groups of participants have been done. In the first one the participants interact with VR Zoo Therapy, and in the second one, as a control group, they look at a gray screen. Results show that there is a clear memory performance increase for the participants who interact with Zoo Therapy compared to the control group participants.

The number of people with Alzheimer’s disease (AD) is on the rise, yet there is no effective pharmacological treatment that can slow or reverse the disease’s progress. Negative emotions such as frustration and stress are known to affect cognitive function and memory in adults with AD.

Non-pharmacological approaches to reduce symptoms are likely to be of interest. Animal assisted therapy, for instance, can temporarily improve symptoms. The interaction between a human and an animal produces a decrease in blood pressure as well as a spike in neurochemicals. The treatment may reduce agitate behavior and psychological symptoms of AD [1].

Animals participating in this treatment method are subject to very strict requirements regarding the sanitary pre-treatment of the environment. With its immersive nature, Virtual Reality (VR) has proven to be an effective treatment for some disorders, and it could eliminate the limitations of traditional real-life methods. Thus, by using virtual animals, real animal therapy could be eliminated as a restriction.

Creating this system requires VR for immersion, gesture recognition for animal reactions, EEG for measuring patients’ emotions, and neurofeedback for adjusting animal behavior based on their emotions. We focus our research on older adults with subjective cognitive decline (SCD), as these individuals progress to dementia at a higher rate than those with no subjective impression of decline and are sometimes in the early stages of the disease [2]. In this work, we aim to verify that VR Zoo therapy can improve attention and memory performance.

The rest of this paper is organized as follows. The second section presents the Animal Assisted Therapy. Section 3 outlines our VR Zoo Therapy. In section 4, we detail the experimental procedure. Finally, in section 5 we present and discuss the obtained results.

Alzheimer’s disease is a chronic, progressive neurodegenerative disease that usually begins slowly and worsens over time, causing 60-70% of dementia cases [3,4]. It has three main groups of symptoms.

Symptoms of Alzheimer’s disease progress from mild dementia symptoms to very severe dementia [3]. As the situation worsens, the patient often withdraws from family or society [3] and gradually loses physical function, eventually leading to death [5]. The causes of Alzheimer’s disease are still poorly understood [3]. No treatment stops or reverses its progression, although some may temporarily improve symptoms [4]. Most of these treatments are palliative.

Current treatments can be divided into pharmacological, psychosocial, and curative. Animal Assisted Therapy (AAT) is a treatment that focuses on psychosocial stimulation, humananimal interactions for therapeutic purposes. It can help someone recover from a health problem or mental disorder. The most commonly used types of AAT are canine assisted therapy and equine assisted therapy. AAT aims to improve a patient’s social, emotional, or cognitive functioning. An increasing number of studies show the psychological, social, and physical benefits as well as the educational benefits of animal-assisted therapy [6]. In the elderly, AAT can be used to improve restless behavior, psychological, occupational, social, and physical disturbances, particularly in Alzheimer’s disease and dementia.

AAT may increase social interactions by initiating a reduction in agitated behaviors in patients with Alzheimer’s and dementia [7]. People with Alzheimer’s can easily decipher the simple, repetitive, nonverbal actions of a dog. Animals can act as transitional objects, allowing humans to first establish a connection with them and then extend that connection with humans. Most research findings suggest that AAT, particularly as therapy in dogs, has a “soothing effect” on patients with dementia and Alzheimer’s disease [8].

Virtual Reality Zoo Therapy integrates the theory of AAT and eliminates its constraints. The most common forms of AAT are dogs and horses. Therefore, we integrated a 3D horse and a 3D dog.

Using VR, we can show a realistic, safe, and economical virtual interactive environment. In this environment, the patient can interact with the animals using virtual hands (see Figure 1). The gestures of the patients are analyzed and reproduced using a Leap Motion Device and machine learning model. 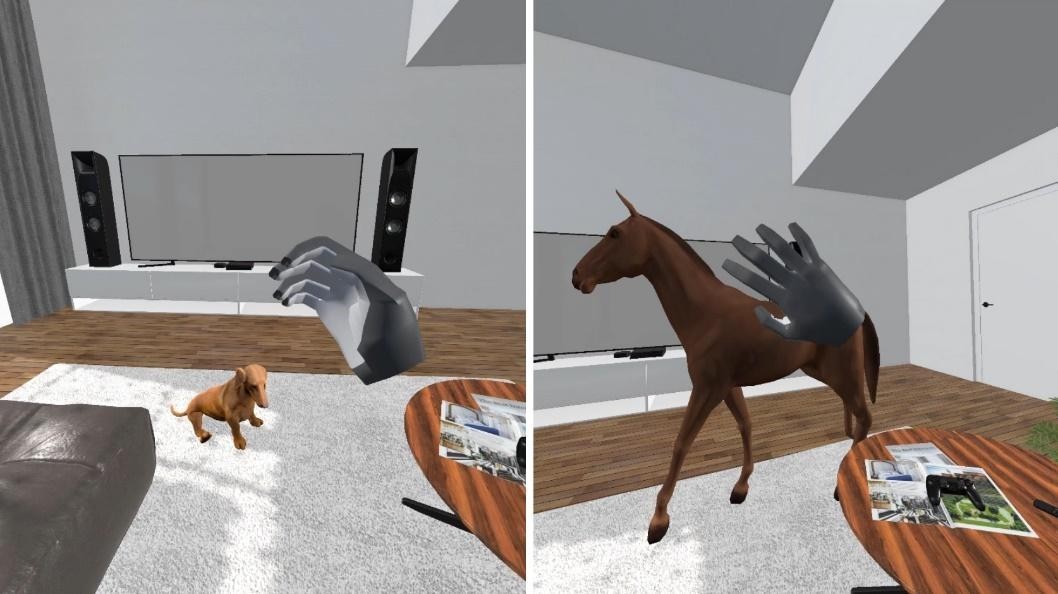 The patients can choose between a dog and a horse and interact freely with them using their hands. They can call the animal to approach, eat, or ask to leave at any time. Animals respond as soon as they receive instructions from the patient. In order to match the interaction between animals and users, we made some animations while generating 3D animals’ behavior, such as walking, running, eating, etc.

In order to analyze the impact of Virtual Reality Zoo Therapy on the cognitive performance of the Alzheimer’s disease patients, the participants perform 6 exercises: 3 attention exercises and 3 memory exercises. The following is a description of the attention and memory exercises.

Exercise A2: participants hear a list of letters at a rate of one letter per second and are invited to click the space bar every time they hear the letter “A”.

Exercise A3: images of different objects are shown for a short period of time. Each image is then replaced by four letters and the participant is asked to select the first letter of the object’s name.

Exercise M2: several circles are presented to the participants. A series of these circles is highlighted one by one to create a sequence. The participants are asked to memorize and reproduce the same sequence.

Process of the experiments

Before the experiments, all the participants took a pre-experiment session in which we make sure that they are eligible to perform the experiments. Our eligibility criteria were the following:

· Met the Consortium for the Early Identification of Alzheimer’s Disease – Quebec (CIMA-Q) criteria for SCD:

— The presence of a complaint defined as a positive answer to the following statements: “My memory is not as good as it used to be” “and it worries me.”

— No impairment on the logical memory scale based on the education-adjusted CIMA-Q cut-off scores.

In this pre-experiment session, participants were provided with oral and written description of the study and were invited to sign a consent form.

During the experimental session, the participants start by filling a pre-session form. Next, we equip them with the Emotiv Epoc+ EEG headset, and then, they perform the attention and memory exercises. After they complete the exercises, if the participants belong to the first group, we equip them with the Fove VR headset, and they start interacting with Zoo Therapy, otherwise, if they belong to the second group, they will look to a gray screen for 5 minutes. After that, the participants complete other examples of the attention and memory exercises and finish by filling a post-experiment form. Figure 2 details the process of the experiment. 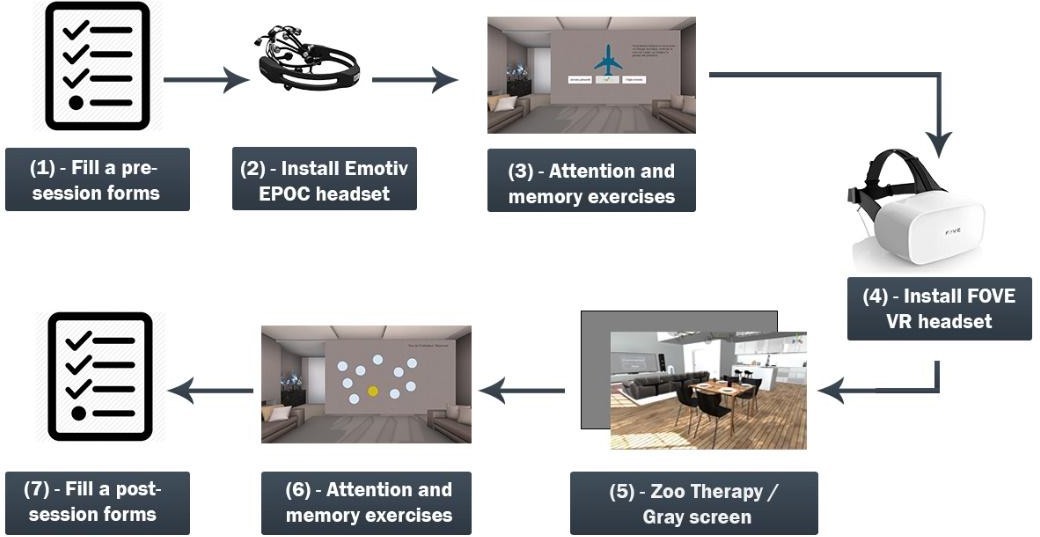 Figure 2: Process of the experiment. 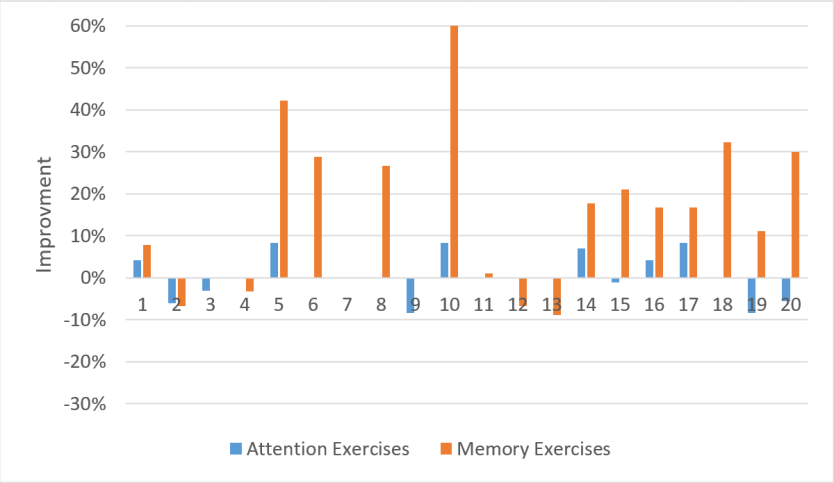 In order to make sure that the performances increase obtained after Zoo therapy are related to the interaction with the environment, we analyzed the performance improvement before and after the control group experiment. Figure 4 shows the obtained results in which we can notice that many participants get performance drop. 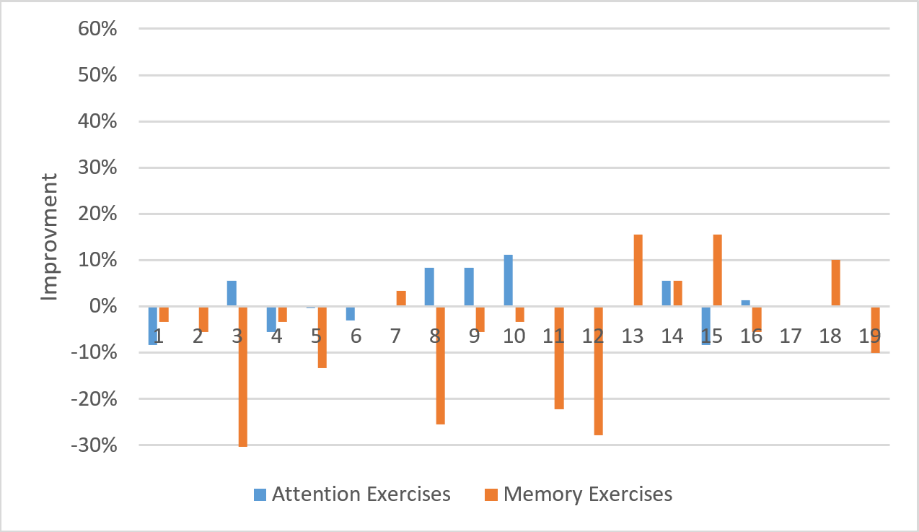 We can explain the degradation of the performances despite the same exercises with different examples by the mental fatigue since there was no relaxation via the interaction with an animal.

The results presented in the previous section show that our approach has a great potential to improve memory performances. However, our work has some limitations; First, we could not perform experiments on more than 39 participants (2 group combined) due to COVID restrictions. Second, we need to add more animals in Zoo Therapy so the patients will have more animal choices, so the experience is more personalized for each patient.

In this paper we presented Virtual Reality Zoo Therapy, a virtual reality therapeutic environment based on animal assistant therapy for Alzheimer’s Disease patients. Experiments were conducted during which we divided the participant into two groups. For the first group, participants were asked to perform attention and memory exercises, then immersed in Virtual Reality Zoo Therapy, then perform the exercises again. For the second group (control group), participants look at a gray screen between the attention and memory exercises. Results showed that the memory performance increased for the Zoo Therapy group compared to the control group.

We acknowledge NSERC-CRD (National Science and Engineering Research Council Cooperative Research Development), PROMPT, and Beam Me Up for funding this work.

We thank Yan AI for creating the Zoo Therapy environment and Alexie Byrns for participating in the experiments.