Copyright © 2021 Rocha S, et al. This is an open-access article distributed under the terms of the Creative Commons Attribution License, which permits unrestricted use, distribution, and reproduction in any medium, provided the original author and source are credited.

Type 2 diabetes mellitus is one of the greatest health burdens of our society. Despite the extensive options of current drug treatments, novel therapies are under development to manage this chronic disorder and its subsequent complications. The inhibition of the enzyme protein tyrosine phosphatase 1B (PTP1B) is a promising therapeutic intervention in diabetes and obesity. However, finding selective PTP1B inhibitors remains a challenge. The pyrazole scaffold is considered of high pharmaceutical interest due to the high range of pharmacological activities. Nonetheless, the study of their effect against PTP1B activity have not yet been fully explored, opening a new field of research to find a new potential approach for type 2 diabetes mellitus management. This commentary presents and discusses PTP1B as an emerging target for type 2 diabetes mellitus management.

Diabetes mellitus (DM) is a chronic multifactorial disorder affecting an increasing number of patients worldwide [1]. DM can be classified into four general categories, based on the classification reported in 2021 by the American Diabetes Association: type 1 DM, type 2 DM, gestational DM and specific types of DM due to other causes. Among those, type 2 DM is the most common form, accounting for 90-95% of all diabetic cases [2]. This form of DM is normally characterized by a background of insulin resistance, with a progressive impaired insulin secretion by pancreatic β cells. These abnormalities culminate in chronic levels of glucose in blood, hyperglycemia [3,4].

Currently, several drugs of different classes are approved for the treatment of type 2 DM, including biguanides, sulfonylureas, thiazolidinediones (TZD), meglitinides, dipeptidyl peptidase 4 (DPP-4) inhibitors, α-glucosidase inhibitors and sodium-glucose cotransporter 2 (SGLT2) inhibitors [5]. Despite the high number of the currently approved medicines to treat type 2 DM, more than 7,000 clinical trials are registered for the development of new formulations [6]. Notwithstanding the increase of therapeutic options over the last decades, available therapies have been demonstrating limitations and drawbacks. Despite metformin being the most prescribed drug in type 2 DM patients, its mechanism of action remains poorly understood. Moreover, its use is associated with gastrointestinal side effects [7]. Other currently approved drugs for type 2 DM management are also accompanied by several limitations, including hypoglycemia, body weight alterations, cardiovascular disease risk and urinary tract infections [5]. Moreover, according to the International Diabetes Federation, in 2019, 4.2 million people died due to DM [8]. Consequently, novel therapeutic approaches are essential to treat type 2 DM and the associated micro- and macrovascular complications. Regarding the currently used treatments, the novel emerging therapies are expected to display added value, including the potential of weight loss, no risk of hypoglycemia, improved methodologies for drug delivery and a decrease of the frequency of use [6].

Insulin resistance and impaired insulin secretion by β cells are the key defects in type 2 DM. In fact, insulin resistance is present in muscle, liver, adipose tissue, kidney, gastrointestinal tract, vasculature and brain tissues, and pancreatic β cells. Multiple abnormalities can lead to the development of insulin resistance in target tissues, such as defects involving insulin signaling, glucose transport, or glycogen synthesis [3]. The metabolic insulin signal transduction is a complex process ( Figure 1). In brief, the binding of insulin to insulin receptor (IR), leads to the autophosphorylation of tyrosine residues and its consequent activation and recruitment of insulin receptor substrate (IRS) proteins. This results in the activation of the intracellular signaling molecules phosphatidylinositol 3-kinase (PI3K) and protein kinase B (PKB; also known as Akt), promoting the translocation of the glucose transporter vesicles to the membrane, resulting in glucose uptake [9] (Figure 1). The enzyme protein tyrosine phosphatase 1B (PTP1B) is a negative regulator of the insulin signaling pathway, being a potential therapeutic target under investigation for type 2 DM [ 10]. PTP1B, as a negative regulator of the insulin signaling, dephosphorylates the IR and IRS, which consequently leads to a decreased insulin signaling. Therefore, PTP1B inhibition will increase IR and IRS phosphorylation, and increase insulin sensitivity [11]. In addition, PTP1B is a negative regulator of the leptin signaling, being also considered a potential target for obesity (Figure 1). Obesity and physical inactivity are related to insulin resistance. Gradually, the occurrence of obesity and a genetic predisposition, generates insulin resistance and β cell failure, with a consequent decrease in insulin secretion, evolving to type 2 DM [9]. Leptin is a hormone produced mainly in the adipose tissue, and its main function is to increase dietary fat tolerance and maintain fatty acid homeostasis. Therefore, when leptin action is impaired, which occurs in obesity, the lipid content on some tissues, such as liver and muscle, increases and causes lipotoxicity. The binding of leptin to its receptor, ObR, leads to the phosphorylation of the janus kinase 2 (JAK2), activating other downstream intracellular mechanisms. PTP1B dephosphorylates leptin receptorassociated kinase, JAK2, causing its deactivation. Therefore, PTP1B inhibition may decrease leptin resistance (Figure 1) [ 9,12]. Hence, PTP1B inhibition is a potential therapeutic target to the management of type 2 DM with potential weight loss effect. 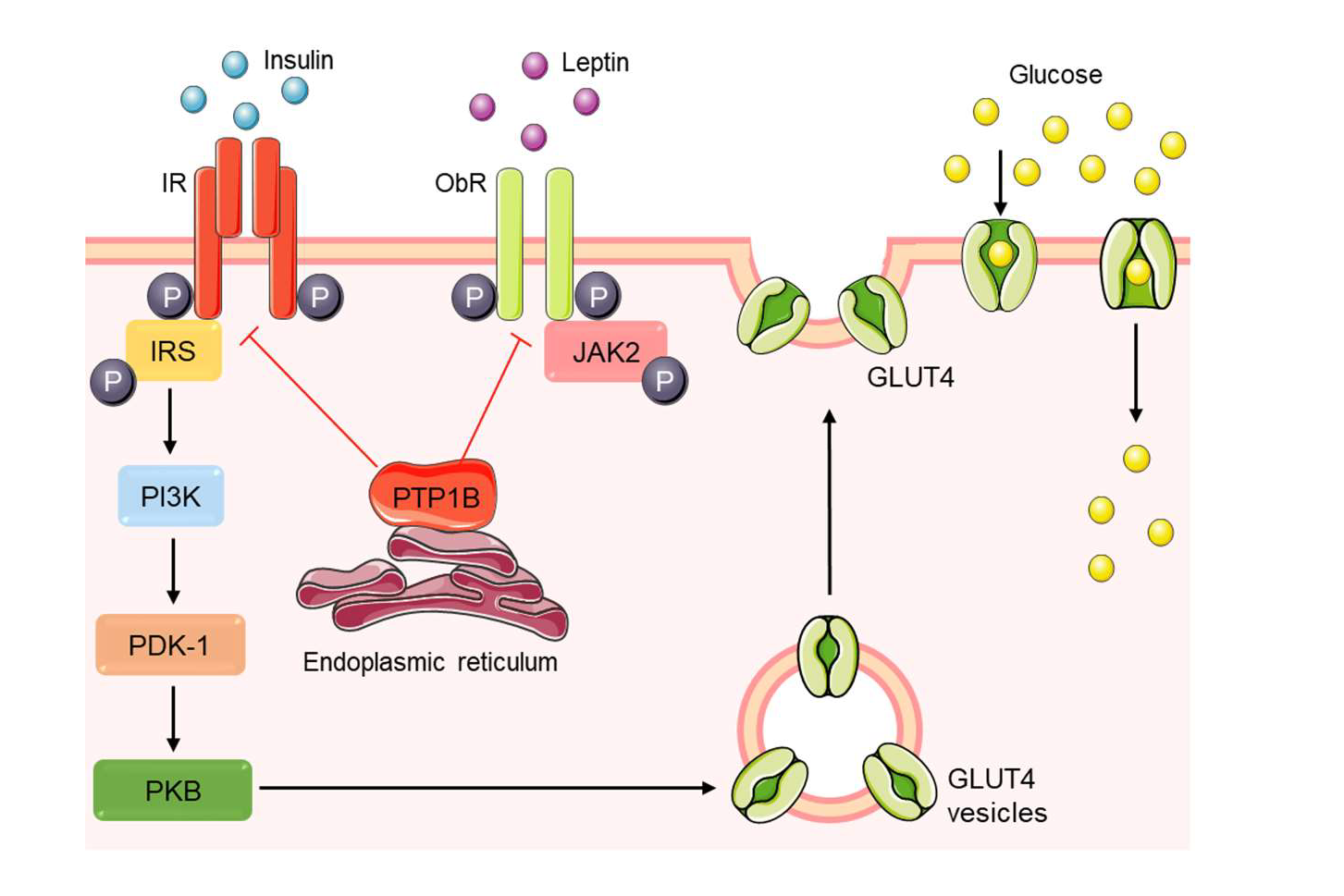 Several compounds have been investigated as PTP1B inhibitors, including natural and synthetic drugs. However, so far, only ertiprotafib, trodusquemine and JTT-551 have reached the clinical trials, though have been discontinued from these studies due to adverse side effects [10,14]. The major impediment on the discovery of novel PTP1B inhibitors is associated with the high sequence homology with other closely related PTPs, mainly the T cell PTP (TCPTP) [14]. Previous studies found in the literature have mainly been focused on inhibitors to target the active site of PTP1B, which contains a highly conserved amino acid sequence in the active site. Particularly, PTP1B and TCPTP shares a 74% sequence homology in its catalytic domain. Therefore, the search of novel inhibitors needs to be focused on the selectivity with other PTPs. As an alternative, designing inhibitors to the allosteric sites, with lower sequence conservation, has been suggested as a possible strategy to discover new effective and selective PTP1B inhibitors [15].

Being one of the most popular rings of bioactive compounds, pyrazoles are heterocyclic aromatic compounds, containing two nitrogen atoms in the five-membered ring [16,17]. The pyrazole scaffold is recognized by the broad range of biological activities, including antimicrobial, anticancer, antidepressant, analgesic, anticonvulsant, anti-inflammatory, antioxidant and antidiabetic. In fact, a large number of synthetic pyrazoles have already been approved in the clinic, including celecoxib (Celebrex®) and sildenafil (Viagra®) [18,19]. In addition, the oral drug teneligliptin (Teneglucon®), containing a pyrazole core in its structure, is an approved drug for the treatment of type 2 DM, acting as a DPP-4 inhibitor [20].

In spite of the remarkable potential activities of these compounds, to the best of our knowledge, there are only five published articles reporting the inhibitory activity of pyrazoles against PTP1B activity [21-25]. Basu et al. [21] studied a panel of amino-carboxylic based pyrazoles holding 1,2-diphenyl ethanone, oxadiazole, or dibenzyl amines as hydrophobic tails. The authors concluded that, in general, oxadiazole derivatives and dibenzyl amines were the most effective derivatives, when compared to 1,2-diphenyl ethanone derivatives. Moreover, in some of the tested compounds, the authors reported that the chloro substituent is able to improve the potency of the compounds against PTP1B activity [21]. De-la-Cruz-Martínez et al. [22] synthesized and evaluated two series of indole- and N-phenylpyrazole-glycyrrhetinic acid derivatives. However, in opposite to Basu et al. [21], the authors reported that the addition of a chloro substituent culminates in a negative impact on the activity of the compounds. On the other hand, the presence of a trifluoromethyl group improved the inhibitory activity of the studied derivatives [22]. Sun et al. [24] studied a series of 1,3-diaryl pyrazole derivatives containing rhodanine-3-alkanoic acid groups. The authors concluded that the increase of the length of a carbon chain in the studied compounds resulted in an increase of the inhibitory activity. Additionally, the authors reported that the presence of a naphthalene ring, compared with a phenyl ring, had dramatically improved PTP1B inhibitory activity [24]. In our recently published work, in order to provide deeper structure-activity relationship conclusions, we have searched for new PTP1B inhibitors studying a panel of 22 unexplored structurally related pyrazoles against human PTP1B (Table 1) [25]. In accordance with Basu et al. [21], the chloro substituent was crucial for the activity of the studied pyrazoles, as observed by comparing pyrazole 1, unsubstituted in the styryl group (<30 % at 100 μM), and pyrazole 2, bearing a chlorinated styryl group (with an IC50 value of ≈100 μM) (Table 1). In our study, it was also possible to conclude that the presence of a trifluoromethylstyryl group in pyrazole 4 (35 ± 2 % at 50 μM) had a positive effect on the inhibitory activity, as reported by De-la-Cruz-Martínez et al. [22]. The pyrazoles 5-(2-hydroxyphenyl)-3-{2-[3-(4- nitrophenyl)-1,2,3,4-tetrahydronaphthyl]}-1-phenylpyrazole (20) and 3-(2-hydroxyphenyl)-5-{2-[3-(4-methoxyphenyl)] naphthyl} pyrazole (22) (Table 1) were the most potent inhibitors of PTP1B, with an IC50 value of 27 ± 3 μM and 36 ± 3 μM, respectively, showing a noncompetitive inhibition mechanism. It was possible to conclude that the presence of additional benzene rings as functional groups in the pyrazole moiety enhances the potential of pyrazoles to inhibit PTP1B. Additionally, selective inhibition over the homologous TCPTP was evaluated for the positive control, ursolic acid, and the most active compounds, 20, 21 and 22. In contrast with the positive control, pyrazoles were also able to specifically inhibit PTP1B over TCPTP, with an inhibitory activity <50 %, at the maximum tested concentration of 50 μM. Selective inhibition is crucial to overcome unwanted side effects related with the inhibition of TCPTP, which plays a key role in regulating T-cell activation. Additionally, the in silico studies showed that the most active compounds establish a particular interaction involving the residues TYR46, ASP48, PHE182, TYR46, ALA217, ILE219 and absent contact with GLN262. Our study provides important considerations about the pyrazole scaffold and their potential use as PTP1B inhibitors [25].

Inhibition (mean % ± standard error of the mean) at the highest tested concentration (in superscript) able to be tested at the assay conditions, to avoid interferences with the methodology. The IC50 values with different lowercase superscript letters are statistically different from each other (p <0.05).

In a continuing search for new PTP1B inhibitors, the potential use of pyrazoles for type 2 DM management needs to be further explored in additional studies, using cellular and in vivo models of insulin resistance and DM.

Insulin resistance has been studied extensively at systemic, organ, tissue and cellular and molecular levels. Overnutrition plays an essential role in the development of chronic metabolic diseases such as obesity and type 2 diabetes. For subjects without genetic defects, the development of insulin resistance and type 2 diabetes is a graduate process. How the transition from an insulinsensitive state to an insulin-resistant state occurs, and what the roles of nutrients are in the process have not been fully understood. Here, we try to summarize the current understanding of insulin-regulate gene expression in the liver, and describe a phenomenon of hepatic insulin resistance at gene expression (HIRAGE), which may be linked to overnutrition.

Commentary: A Herbal Treatment for Type 2 Diabetes – The Dangers of Adulterated and Falsified Products

In 2018, our group published a letter in The Lancet detailing a case in which a patient had taken a herbal preparation to treat her diabetes [1]. In essence, our laboratory was approached by the treating physician after the patient, a 58 year old lady of south Asian origin with a 30 year history of type 2 diabetes said that, during the previous two years, she had replaced some of her prescribed anti-diabetic medication with a herbal remedy purchased in India.

Type 2 diabetes (T2D) remains undiagnosed for many years in large number of persons living in developing countries. The cost of diagnostic tests and the invasive procedures involved in conventional screening methods remain a major setback to timely testing

The question of whether or not correction of vitamin D deficiency might reduce the risks of later type 2 diabetes mellitus (T2DM) has been under debate for many decades. The necessity of vitamin D for normal insulin secretion was first identified experimentally in the 1980s.