Copyright: © 2022 Guo X, et al. This is an open-access article distributed under the terms of the Creative Commons Attribution License, which permits unrestricted use, distribution, and reproduction in any medium, provided the original author and source are credited.

Idiopathic pulmonary fibrosis (IPF) is an incurable disease that affects approximately 3 million people worldwide [1]. Although two drugs (nintedanib and pirfenidone) have been approved for treatment of IPF, currently there is a lack of effective pharmacotherapy that could stop the progression or offer a cure for this devasting disease.

Programmed death-ligand 1 (PD-L1) is an immune checkpoint protein that serves as a mechanism of immune surveillance. It limits excessive immune response through binding with its receptor PD-1 on T cells and suppressing their activation [2]. Increasing evidence also unveils an important role of PD-L1 in cancer cell proliferation, metastasis, and drug resistance to targeted therapy [2,3]. Recently, a few papers published support targeting PD-L1/PD-1 axis for treatment of IPF [4-7]. The treatment with an anti-PD-L1 antibody attenuates/blocks the progression of pulmonary fibrosis in preclinical models of IPF. Beyond the immune cells, new evidence has also suggested a novel role of PD-L1 in fibroblasts [5,8], particularly through a process termed fibroblast to myofibroblast transition (FMT) or myofibroblast differentiation.

Lung fibroblasts play a critical role in the progression of pulmonary fibrosis. One critical feature lies in the differentiation of fibroblasts to myofibroblasts, which express structural protein α-SMA and excessive extracellular matrix, thus contributing to the structural remodeling of the lung. Myofibroblasts also entails positive feedback through secretion of profibrotic mediators, especially TGF-β1, the most potent inducer of profibrotic changes. Geng et al. identified a subgroup of invasive lung fibroblasts that possess high levels of PD-L1. Those fibroblasts with high PD-L1 expression can induce fibrotic changes in the mouse lungs upon tail vein injection [6]. The finding implicates PD-L1 in the development of pulmonary fibrosis in vivo. Kang et al. reported that TGF-β1 induces PD-L1 expression using established human and murine fibroblast cell lines and PD-L1 is implicated in FMT [5]. However, the underlying mechanisms remain elusive.

The recent publication by our group [8] provides further insight on how PD-L1 mediates FMT and how it is intervened with the TGF-β signaling. In this manuscript, the authors first demonstrated an enhanced expression of PD-L1 in the fibrotic lungs of IPF patients and mice models of pulmonary fibrosis. The finding provides a proof of concept of the implication of PD-L1 in pulmonary fibrosis. The authors further showed that TGF-β1 induces the expression of PD-L1 in several lines of primary lung fibroblasts from both normal and IPF donors. These data, together with a previous report using established cell lines [5], strengthen a role of PD-L1 induction by TGF-β1 in the FMT process. In addition, the expression of PD-L1 has also been identified in alveolar/bronchial epithelial cells [9] and alveolar macrophages [10] of IPF patients, implying various sources of PD-L1 in the pathogenesis of IPF.

Both canonical and non-canonical pathways of TGF-β1 signaling contribute to the FMT process and pulmonary fibrosis development. The manuscript demonstrated that PD-L1 is involved in different pathways to promote FMT. The interaction between PD-L1 and Smad3 was confirmed through immunofluorescent co-staining of PD-L1 and phosphor-Smad3 and co-immunoprecipitation (co-IP) assay. The interaction increased with the treatment of TGF-β1, although a basal level of interaction was also found. It remains unclear, however, whether such increased interaction (co-IP) is due to elevated expression of PD-L1 or perhaps a result of increased binding affinity. Further study is also warranted to examine the transport of PD-L1 from cytoplasm to the nucleus where co-staining of PD-L1 and phosphor-Smad3 was noted. The recent identification of the p300 as the acetyltransferase of PD-L1 provides a mechanism for the nuclear transport of PD-L1 in cancer cells [11], which deserves further investigation in the setting of lung fibroblasts, especially in view of the interactions between TGF-β and p300 [12,13].

Whether the binding between PD-L1 with Smad3 also stabilizes phosphor-Smad3 and thereby increasing its activity needs to be addressed in future studies. Another shortcoming of the study is the overlook of Smad2 in the FMT process. Whether PD-L1 also binds with Smad2 to form a tri-complex with Smad3 deserves further investigation. Nevertheless, this manuscript presents novel findings that help explain how PD-L1 is intervened with the Smad3 signaling. This finding might be of general interest in terms of the complex role of TGF-β in tumor progression and tissue fibrosis of other organs. Another mechanism reported in this manuscript involves the modulation of the GSK3β/β-catenin signaling by PD-L1. Previous studies have reported that Wnt/β-catenin signaling upregulates PD-L1 transcription in diverse cancer cells [14-16]. Interestingly, PD-L1 has also been found to activate β-catenin signaling in different cancer cell types [14,17], suggesting potential positive feedback. β-catenin is a known target of GSK3β for ubiquitin dependent degradation. It is also implicated in lung myofibroblast differentiation [18]. The link between PD-L1 and β-catenin signaling provides an additional layer of control over the FMT process in the context of IPF.

The identification of the upstream regulator of PD-L1 by TGF-β provides novel insight on the control of PD-L1 levels. Interestingly, Smad3 inhibition by a specific small molecule inhibitor SIS3 attenuates the induction of PD-L1 by TGF-β. It seems that there exists a positive loop between Smad3 and PD-L1, i.e., Smad3 upregulates PD-L1 level which in turn binds to and increase the activity of Smad3. However, more experiments are needed to test this hypothesis. On the other hand, p38 pathway as a critical non-canonical TGF-β signaling has also been implicated in the regulation of PD-L1. Inhibition of p38 also attenuates the induction of PD-L1 by TGF-β. Beyond IPF, asthma related subepithelial fibrosis also benefits from the inhibition of the p38 pathway [19]. Whether targeting PD-L1 will likewise benefit fibrosis of other organs remains to be explored.

The transcriptional regulation of PD-L1 was demonstrated through an array of assays in this manuscript. It is well known that multiple mechanisms control the level of PD-L1 including manipulating its protein stability [20], e.g., the identification of March8 as a novel E3 ligase for PD-L1 degradation [21]. Whether TGF-β signaling also affects the stability of PD-L1 remains an interesting question and warrants further experimental testing. The authors put together these findings nicely into a diagram. TGF-β induces PD-L1 expression that is dependent on Smad3 and p38 signaling. Increased PD-L1 in turn binds to Smad3 to enhance its activation and transcriptional activity (via α-SMA luciferase reporter assay). In addition, PD-L1 also contributes to upregulated β-catenin levels induced by TGF-β, which is likely mediated through GSK3β pathway. Through those two mechanisms, PD-L1 is implicated in TGF-β induced FMT process and potentially the development of pulmonary fibrosis. A schematic presentation of the mechanisms by which PD-L1 mediates FMT is shown in Figure 1 (Created with BioRender.com). 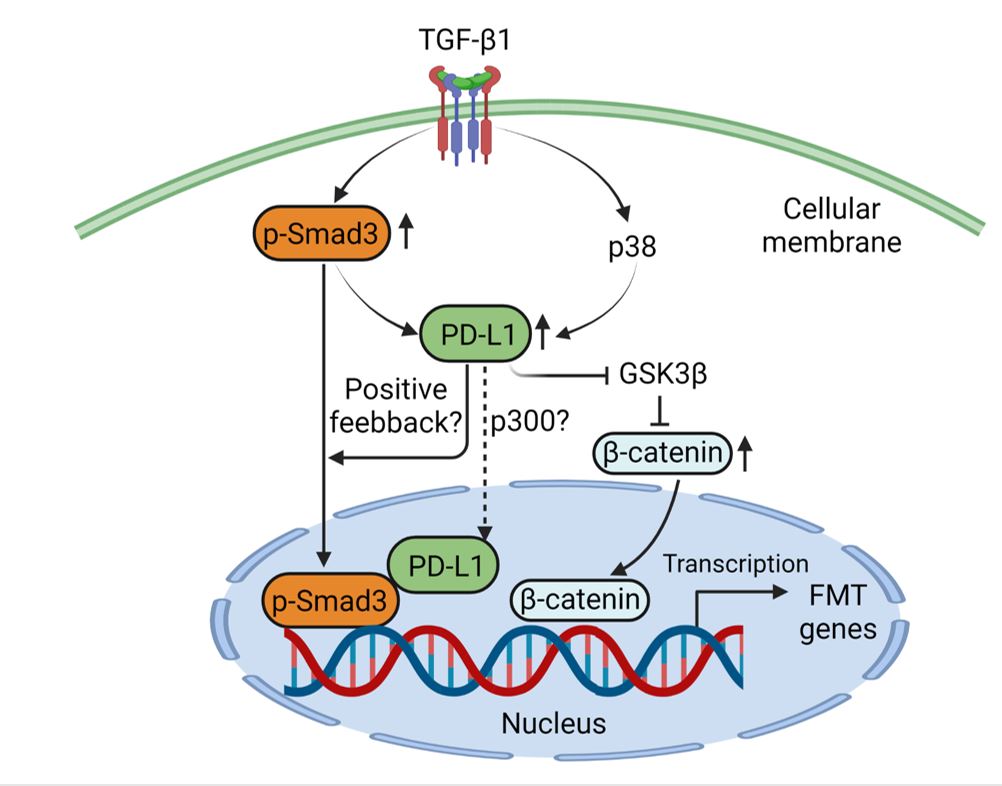 Figure 1: A diagram of the mechanisms by which PD-L1 mediates fibroblast to myofibroblast transition (FMT).

As mentioned above, PD-L1 expression has been reported in diverse cell types including alveolar macrophages [10], alveolar epithelial cells [9,22], and lung fibroblasts [4-6,8]. Therefore, the generation of fibroblast-specific mouse model is a prerequisite for testing the role of PD-L1 in lung fibroblasts towards pulmonary fibrosis development. Currently, the conditional model is not available and future work is needed to generate the fibroblast-specific PD-L1 knockout mouse model. A recent study [23] has identified a subpopulation of alveolar type II epithelial cells (AECII) that express PD-L1 and expand in the lung of IPF patients. Due to a progenitor role of these cells, a concern is raised that PD-L1 inhibition might injure the already compromised epithelial compartment in the IPF lung. Similarly, this speculation remains to be tested using conditional PD-L1 knockout mice model.

In summary, the immune checkpoint protein PD-L1 has emerged as a novel target for the treatment of IPF. Accumulating evidence supports the targeting of PD-L1 to block the development of pulmonary fibrosis. Experiments are needed, however, to test whether inhibition of PD-L1 could reverse the already existent fibrotic lesions in the lung of IPF patients, which is often the case in the clinic. It is likely that the role of PD-L1 in the progression of pulmonary fibrosis is complex, arising from diverse cell types and involving different mechanisms. The generation of cell-specific PD-L1 knockout animal models might hold the key to unveil the full view of PD-L1 in the development of IPF.

The authors have no conflict of interest to declare.