Copyright: © 2020 Barthelemy J, et al. This is an open-access article distributed under the terms of the Creative Commons Attribution License, which permits unrestricted use, distribution, and reproduction in any medium, provided the original author and source are credited.

We recently reported that influenza infection is associated with drastic, depot-specific changes in white adipose tissue (WAT), notably the occurrence of thermogenic brown-like adipocytes within the subcutaneous depot, a process referred to as WAT browning. In mammals, induction of the thermogenic circuit increases heat production and consumes energy, consequently improving host’s metabolism. Importantly, we also demonstrated that mouse and human preadipocytes commit to the thermogenic differentiation program upon in vitro influenza virus infection; this signifies that infection-associated WAT browning may partly rely on a direct effect of the virus on fat.

Herein, after a short review of the physiological and cellular mechanisms that have been described to regulate WAT browning, including immune-cell-dependent ones, we will comment on the role that white adipose tissue, which is at the crossroads of metabolism and immunity, may play in influenza pathophysiology. 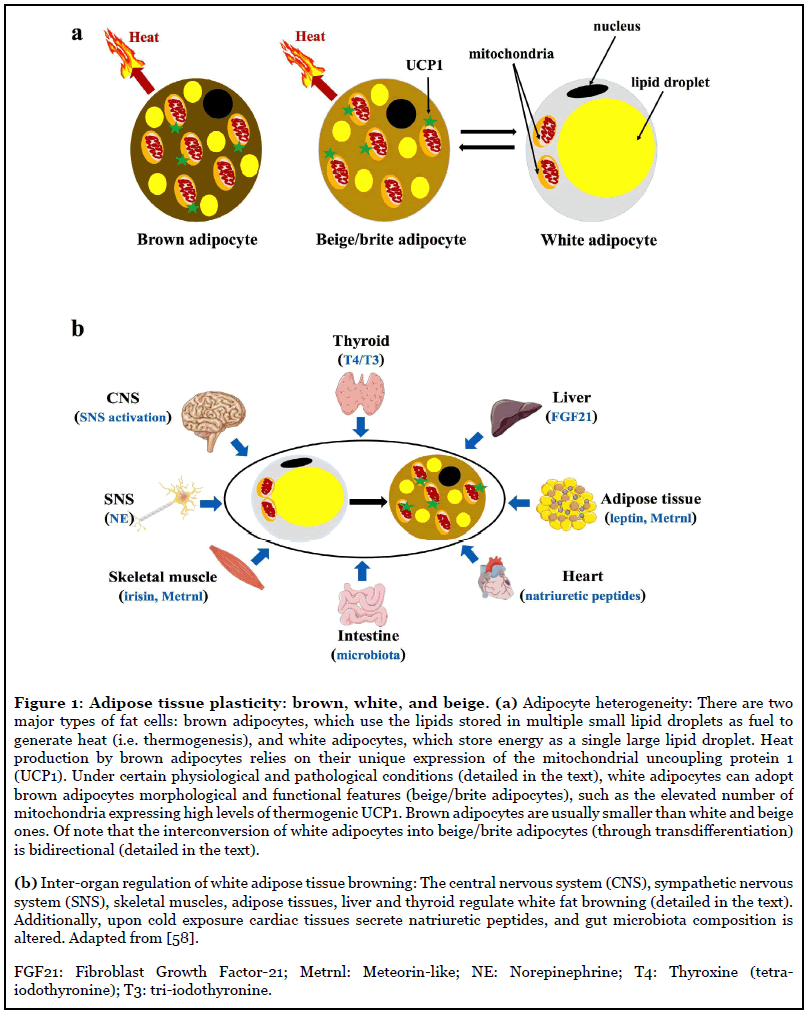 UCP1 was first observed in BAT mitochondria [5], and has a key role in mediating thermogenesis since it dissociates mitochondrial respiration (oxidative phosphorylation) from ATP production [6].

The adipose tissue, mostly the WAT, possesses the remarkable capacity to quickly adapt its size and function in response to a variety of internal and external cues, including nutritional status, ageing, and infection [7,8]. WAT’s tremendous plasticity is notably exemplified by the large increase in the number of thermogenic beige/ brite adipocytes (a process called “WAT browning” or “WAT beiging”) upon conditions such as e.g. chronic cold exposure, regular physical exercise, intermittent fasting or caloric restriction [3,9-11]. In addition, numerous “browning inducers” have now been described (certain food components or drugs), and have been expertly listed in several reviews [12,13]. It should be noted that the subcutaneous fat depots are more likely to undergo browning than visceral fat because subcutaneous adipocytes are predominantly smaller and have a greater potential to differentiate [14].

WAT browning is an adaptive response to certain environmental stimuli, including cold exposure, exercise, or restriction in nutrient supply, as well as various peptides and hormones [3,9-15]. In response to such cues, thermogenic beige/brite adipocytes will emerge in WAT either from de novo differentiation of newly recruited precursor cells [16] and/or from transdifferentiation of white adipocytes towards beige/brite adipocytes [17]. WAT browning is a reversible phenomenon: it ceases upon termination of the external stimulus. In the context of prolonged cold-exposure, it has been demonstrated that cold-induced beige/brite adipocytes are gradually replaced by UCP1-negative adipocytes with unilocular lipid droplets (i.e. white adipocytes) when cold-exposed mice are returned to room temperature or thermoneutrality [18]. The operating mechanisms of WAT browning are diverse and may depend on the nature of the stimuli. However, it is acknowledged that WAT browning is mostly a sympathetic event: sustained adrenergic stimulation is central to inducing the occurrence of thermogenic beige/ brite adipocytes in WAT; lipolysis being a major regulator of catabolic activity [19]. Upon prolonged cold exposure or exercise, norepinephrine (NE, the main neurotransmitter of the sympathetic nervous system) is released from the sympathetic nerves that innervate the WAT. Then, NE acts on β-adrenoreceptors (predominantly subtype β3) on the surface of adipocytes, thereby promoting mitochondrial biogenesis and peroxisome proliferatoractivated receptor activation [20]. In addition, chronic cold exposure or exercise increase the secretion of irisin (a myokine/adipokine/neurokine) and fibroblast growth factor-21 (a hepatokine/myokine/adipokine), which both promote the differentiation of white adipocyte precursors into mature beige/brite adipocytes [21,22]. More recently, meteorin-like was identified as a circulating hormone that is induced in skeletal muscles after exercise and in adipose tissue upon cold exposure [23]. Besides, other factors have been proposed to contribute to WAT browning, such as thyroid hormones [24], insulin and leptin [25], viperin (an interferon-inducible protein) [26], and erythropoietin [27]. All these secreted factors contribute to WAT browning; illustrating the complex inter-organ connections that occur in response to certain cues to dissipate heat and thus, improve energy metabolism (Figure 1b).

It is worth mentioning that recent findings indicate that brown and beige adipocytes can also carry out thermogenesis through UCP1-independent mechanisms that are still incompletely unraveled [28,29].

Besides adipocytes, WAT also harbors innate and adaptive immune cells that are crucial for tissue maintenance and homeostasis [30-32]. Recently, immune cells were also found to have an unexpected involvement in WAT browning. In 2011, Nguyen and colleagues indeed reported that short-term (6-hour) cold-exposure rapidly promote eosinophil-derived interleukin-4 (IL-4)-dependent alternative activation of WAT macrophages (M2 typemacrophages), which then recruit and activate beige/brite adipocytes in the subcutaneous adipose tissue (SCAT) [33]. In addition, eosinophils have been reported to be the target of meteorin-like, which is induced in skeletal muscle and adipose tissue in response to exercise or cold exposure [23]. Accordingly, genetic loss of eosinophils or IL4/13 signaling blunted cold-induced WAT browning through lack of alternative activation of macrophages [34]. However, whether M2 macrophages do synthesize NE is still a matter of debate [35].

Overall, the current consensus is that type 2 immunity (anti-inflammatory cytokines) promote WAT beiging (at least in rodents) through the complex interplay between eosinophils, M2 macrophages, and ILC2s (Figure 2). Conversely, recent reports suggest that pro-inflammatory factors, such as Tumor necrosis factor-alpha (TNF-α) and endotoxins, may negatively affect WAT browning [39,40]. This may partly explain why WAT browning is impaired in obesity, which is associated with a chronic low-grade inflammation of adipose tissues characterized by elevated local and systemic levels of TNF-α and LPS [41]. 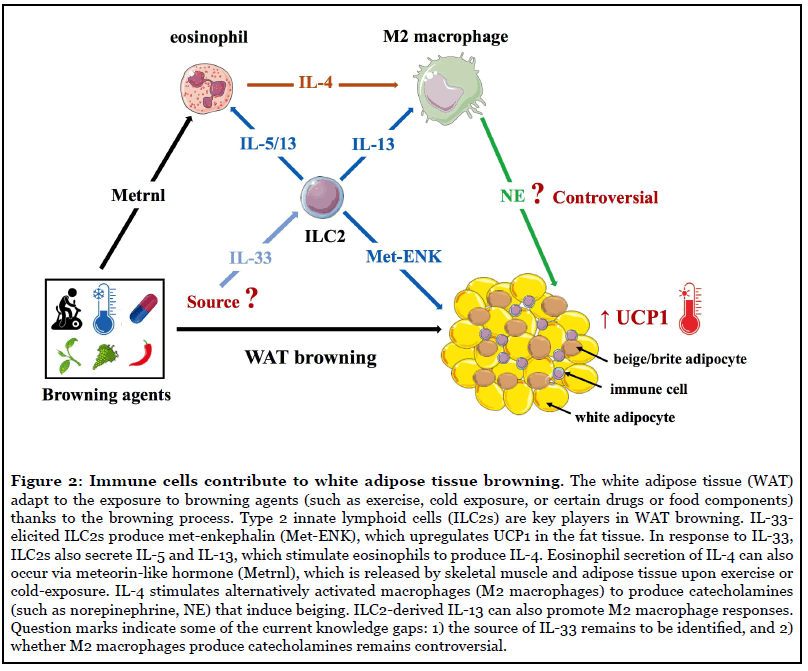 As stated above, WAT contains a wide variety of innate and adaptive immune cells with unique properties and functions [30-32]. Beside contributing to homeostatic tissue function, WAT immune cells also provide defense against infection [42,43]. Importantly, even though innate immune sensors (i.e. pattern recognition receptors (PRRs), which sense invading microbes) are mainly expressed by innate immune cells, several PRRs (such as Toll-like receptor 2 (TLR2) and TLR4) are also broadly expressed by adipocytes and their progenitors (preadipocytes) [44], not to mention that these cells can secrete a large range of pro-inflammatory (e.g. IL-1, IL-6, TNFα, leptin) and antiinflammatory (e.g. IL-10, adiponectin) factors, as well as antimicrobial peptides (e.g. cathelicidins) [45,46].

Thus, WAT has the potential to fight against infection through mounting a local immune response and, most importantly, through contributing to the systemic immune response. Recently, the WAT’s contribution to long-term protective defense against infection was very elegantly demonstrated, and constituted a major scientific breakthrough. Indeed, in models of acute mucosal parasite (Toxoplasma gondii) and bacterial (Yersinia pseudotuberculosis) infection, the authors reported that WAT is a site for the accumulation of pathogen-specific memory T cells (including resident ones) that can protect against subsequent challenge infections [47].

We lately reported on the (short- and long-term) metabolic consequences of influenza A virus (IAV) infection in mice, and on the impact of infection on the two main fat depots: the subcutaneous (i.e. inguinal) adipose tissue (SCAT), and the visceral (i.e. epididymal) adipose tissue (EWAT) [51]. Surprisingly, the viral genome was detected in both SCAT and EWAT (albeit at lower levels than in lungs), thus prompted a search for infected cells in fat tissues. Viral-antigen-harboring immune cells (characterized as hemagglutinin- and CD45-coexpressing cells) were detected, predominantly in the SCAT. The presence of virus-infected immune cells was concomitant with the occurrence of (thermogenic UCP1-expressing) beige/ brite adipocytes in the SCAT (Figure 3). To the best of our knowledge, this is the first demonstration of a selective WAT beiging triggered by an acute viral infection. 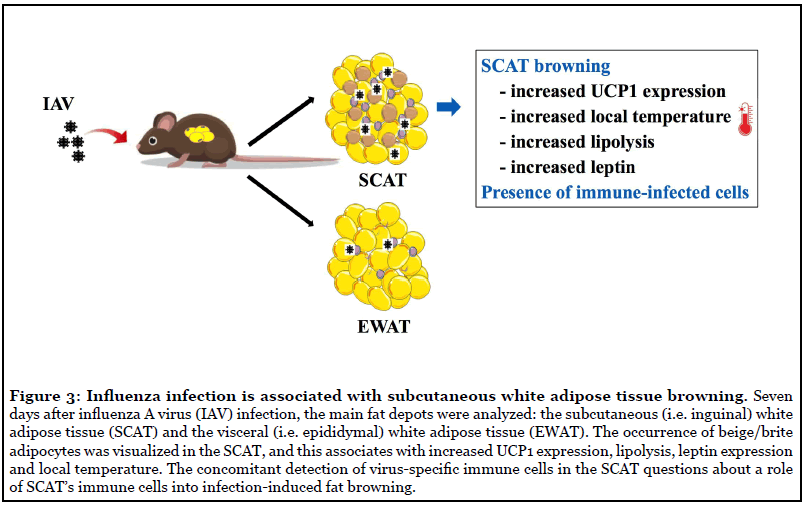 We are currently investigating the mechanism(s) behind influenza-associated WAT browning. As mentioned before, WAT browning occurs in response to e.g. coldexposure or β3- selective adrenergic agonists [3,9-11]. Interestingly, a sympathetic-nervous-system control of anti-influenza immune responses has been described [52], and stimulation of α2-adrenergic receptor (α2-AR) impairs influenza virus infection in vitro [53]. Thus, it remains to be determined whether influenza infection stimulates β3- AR in fat cells, with the consequent enhanced lipolysis, which is followed by a greater capacity for lipid oxidation and thermogenesis in mitochondria, ultimately leading to WAT browning. Infection may also have favored the accumulation and activation of eosinophils, M2 macrophages and/or ILC2 in the SCAT; cell-types known to support WAT browning [33,34,37]. Moreover, the long-term maintenance of low blood glucose levels postinfluenza infection may help promoting type 2 immune cells since these cells predominantly depend on fatty acid rather than glucose metabolism for their energy supply [54]. The phenotyping of WAT’s (innate and adaptive) immune cells is presently under investigation, as well as the determination of their contribution to influenza pathophysiology (through adoptive cell-transfer and graft experiments). Apart from these indirect mechanisms which could explain SCAT browning associated with influenza infection, we showed that the virus on its own can directly promote beige adipogenesis in preadipocytes. Identification of virus-derived factors involved in this process may lead to the identification of novel browning inducer agents targeting key transcription factors in the browning process.

It is commonly acknowledged that induction of WAT browning confers metabolic benefits since it decreases adiposity and increases energy expenditure. Hence, the phenomenon of WAT browning has received much attention for its potential to raise body energy expenditure and, subsequently, reverse/treat obesity and its associated co-morbidities [55]. However, it has to be mentioned that detrimental effects of WAT browning have also been reported, including e.g. heart failure, edema, bone loss, cachexia or cancer, as recently reviewed by Tamucci and colleagues [15]. Thus, there is a need to further investigate factors and mechanisms that regulate WAT browning activation and deactivation.

Considering influenza infection, we showed that influenzainduced SCAT browning is transient since IAV-infected mice were not protected from diet-induced-obesityassociated body weight gain and glucose intolerance. In fact, we propose that influenza-induced SCAT browning may participate to the initial steps of immune defense against the infection. SCAT browning leads to increased local temperature, and a growing body of evidence suggests that immune cells are highly sensitive to thermal stress [56,57]. Thus, influenza-induced SCAT thermogenesis might help to controlling antiviral immune defenses, locally. From the virus side, the temporal weakness of the host (increased thermogenesis reduces energy savings) may help ensuring its propagation in infected cells.

More largely, we believe that the context of this study is important regarding the repeatedly reported associations between viral infections (including influenza) and obesity, a state of excessive (dysfunctional) fat mass and impaired WAT browning.

JB and IW contributed to writing and editing the manuscript. Both authors approved the final version.

The authors have no competing interests to declare.