Copyright: © 2020 Laustsen C, et al. This is an open-access article distributed under the terms of the Creative Commons Attribution License, which permits unrestricted use, distribution, and reproduction in any medium, provided the original author and source are credited.

Conclusion: Risk markers for poorly controlled T2DM were a more pronounced metabolic syndrome and anticipated place of origin, and not clinical inertia, patient attendance at the outpatient clinic nor compliance to medication.

In Denmark, T2DM patients are treated at their general practitioner but are referred to specialized out-patient clinics if HbA1c targets cannot be achieved or if the patient has severe complications [4]. Even though patients are attending a clinic consulting highly educated personnel and experts in T2DM, some patients still do not reach their recommended HbA1c target.

Patients were included from the diabetic outpatient-clinic of Bispebjerg University Hospital in Denmark in 2016. Prevalence of poorly controlled T2DM was determined by the latest HbA1c level in 2016 being ≥ 75 mmol/mol (9.0%).

A cross-sectional comparison between tightly and poorly controlled T2DM was performed to identify risk markers. Definitions were based on current guidelines for being poorly controlled: HbA1c levels ≥ 75 mmol/mol (9.0%) since no target was considered healthy above 75 mmol/ mol, and tightly controlled: HbA1c levels ≤ 50 mmol/ mol (6.7 %) chosen as the middle value of 48 mmol/ mol and 53 mmol/mol. Criteria were that more than one HbA1c measurement in a 12-month period including the last measurement should be within the tightly or poorly controlled cut-off definition. The patients should have a diabetes duration of more than two years and should have attended the endocrinology outpatient-clinic of Bispebjerg University Hospital for more than 2 years. These criteria ensured that the study was based on the treatment given at the clinic. The study was approved by the Danish Data Protection Agency (2018-41-5329).

55 variables expected to play a role in controlling diabetes regarding glycemic control were investigated. Variables such as age, sex, disease duration, body mass index (BMI), blood pressure, lipids (low density lipoprotein (LDL), high density lipoprotein (HDL) and triglycerides), eye status, amputation status, biothesiometry, estimated glomerular filtration rate (eGFR), exercise, alcohol consumption, smoking habits and anticipated place of origin were extracted from the Diabetes Rask, a local patient registry. Alanine-aminotransferase (ALAT) and the albumin/ creatinine ratio were extracted from a laboratory database. Dietician appointments and marital status was obtained from the former patient record database. For information on drug prescriptions and the redemption of the prescriptions a public database was used. Data on the number of consultations in the clinic, the patient’s stability in showing up for these consultations and diagnoses related to the Charlson Comorbidity Index [5], mental illness and diabetes complications were collected from a patient administrative system.

Descriptive statistics were performed for all 55 variables. To estimate the actual differences between the two groups, Fisher’s test was performed for categorical data and either a t-test or a Mann Whitney U test for numerical data depending on normality distribution. Statistical analyses were conducted in Excel 2016 and R studio 3.4.3.

During the study period (Jan - Dec 2016), 1883 patients with diabetes attended the outpatient clinic at Bispebjerg University Hospital. Out of these, 1278 patients were diagnosed with T2DM, 76 of these patients had no record of HbA1c levels in 2016, which resulted in a study population of 1202 patients. 313 of the 1202 T2DM patients were poorly controlled resulting in a prevalence of 26 %. According to inclusion and exclusion criteria, the population of 1202 T2DM patients was separated into tightly controlled (n=46) and poorly controlled (n=108) (Figure 1). 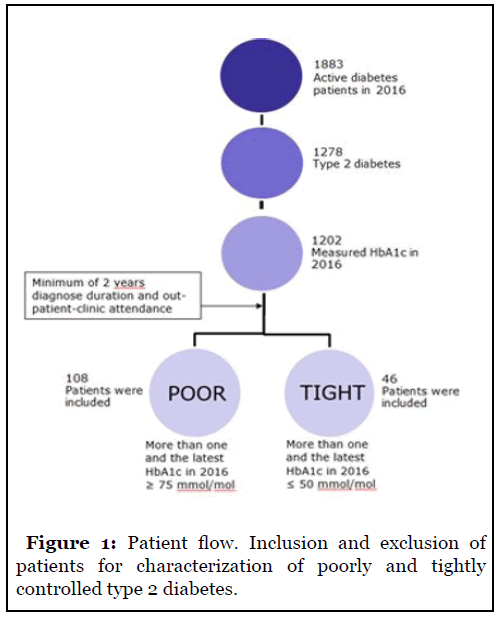 The data are presented as mean (± standard deviation) or median (inter-quartile range) or for categorical data in percent.

1Calculated by dividing collected prescriptions by all medicine prescribed
2Calculated by dividing attended consultations by all consultations requested
3A qualitative prediction based on etymology of Danish first names and surnames
4Comorbidities related to the Charlson Comorbidity Index [5], mental illness and diabetes complications
* 0.01 < P <0.05; ** 0.001 < P < 0.01; *** P = 0.001

The data are presented as mean (± standard deviation) or median (inter-quartile range) or for categorical data in
percent. * 0.01

Drugs for diabetes and other conditions

The data are presented as mean (± standard deviation) or median (inter-quartile range) or for categorical data in percent
of use of the drug. * 0.01

Table 3: Drugs for diabetes and other conditions.

Patients with poorly and tightly controlled T2DM were compared across several variables to identify risk markers for poorly controlled T2DM. We found that poorly controlled T2DM was related to a longer diabetes duration, a worse lipid profile and an anticipated origin different from Denmark. Patients with poorly controlled T2DM had an average 1.5 years longer diagnose duration, which is in agreement with previous studies [8,9,11,12] and might be explained by the increased insulin resistance found with age and diagnose duration [11]. The poorly controlled diabetes patients had significantly higher LDL and triglyceride values, but the recommended values were almost achieved for both groups concerning both parameters. Higher levels of plasma lipids have been reported in other studies [6,8,13]. The slight elevation of lipids may also be part of the metabolic syndrome caused by insulin resistance which increases with age and duration of T2DM [11]. Thus, a more pronounced metabolic syndrome in the poorly controlled T2DM patients may explain the difficulties in achieving target values [14]. A tendency was detected between high LDL-levels and not taking lipidcontrolling drugs (mostly statins) (p=0.054) suggesting clinical inertia for dyslipidemia. The poorly controlled T2DM patients’ anticipated place of origin, were more likely to be other than Denmark than the tightly controlled group. This suggests that treatment regimens should be tailored to individual patients taking all variables into account since variations in basic disease mechanisms may vary with ethnicity [11,13,15].

Interestingly, we found that patients with poorly controlled T2DM had similar selfcare behavior (smoking and exercise habits and alcohol consumption) and compliance rate (meeting stability and prescription redemption) as tightly controlled patients. The patients with poorly controlled T2DM were attending more consultations at the clinic and were prescribed more drugs for their T2DM and a higher percentage received insulin treatment suggesting that, despite intensive care, some patients still do not meet their target glycemic level.

The poorly controlled patients were prescribed significantly more glucose lowering drugs (2 vs. 3), suggesting that the poor control is not caused by physicians’ hesitation in pharmacological treatment. Both groups were given a dosage corresponding to 86% of the maximal dosage for all the glucose lowering drugs, when corrected for e-GFR. A significantly higher number of diabetes drugs prescribed combined with the fact that the poorly controlled diabetes patients received a significantly higher number of consultations than the tightly controlled group (3 vs. 4) indicates a group of treatment-resistant diabetics, meaning patients not responding to the recommended treatment, which is also seen in other studies [6].

Additionally, the poorly controlled patients were significantly more likely to receive insulin treatment (52% vs. 85%), and this is in line with findings in other studies [6,9,13,15-17]. Even in cases with steatosis or an extremely high insulin-resistance, insulin will act anti-hyperglycemic at high doses [18]. Hesitation to increase insulin doses may be due to a combination of increased risk for hypoglycemia, the cost, and the risk for weight gain.

The fact that patients in both groups redeemed 87% of all their prescriptions at the pharmacy suggest a drugcompliance, given that the patients take the medicine they collect at the pharmacy. The patients’ exact compliance degree is difficult to determine. In some cases, the patients’ anxiety for needles or hypoglycemia can play a role [6,15-17].

Additionally, poorly controlled patients had more comorbidities and a higher Charlson Comorbidity Index explained by a higher percentage being diagnosed with cardiovascular, pulmonary, and/or psychiatric disease, together with a more frequent diagnosis of retinopathy. These diagnoses might be a consequence of or a reason for a poorer glycemic control. No statistically significant difference between the groups concerning admissions to the hospital could be demonstrated, but patients with more comorbidities were followed in multiple clinics at the hospital. In support of previous studies and current guidelines on HbA1c targets, our data support that chronic glycemic levels above the recommended lead to a higher risk of microvascular complications [2,3], emphasizing the importance of glycemic control.

Other studies have shown differences in age, gender, marital status, BMI, blood pressure, smoking habits, diet, and exercise between tightly and poorly controlled patients [6-9,12,13,16]. This was not confirmed in the present study.

This study may serve as quality assurance at the out-patient clinic. However, the study holds some limitations. Many variables were self-reported by the patients, redemption of prescription was used to investigating drug compliance, and place of origin was estimated by surnames. Disparities may still be present for other characteristics not assessed in this study, including income, education, and other social and economic factors. Further cross-validation needs to take these precautions into account.