Allicin as an Adjunct Immunotherapy against Tuberculosis

Copyright: © 2020 Fatima S, et al. This is an open-access article distributed under the terms of the Creative Commons Attribution License, which permits unrestricted use, distribution, and reproduction in any medium, provided the original author and source are credited.

Allicin (diallylthiosulfinate) is a volatile, oxygenated, sulphur-containing compound, extracted from garlic (Allium sativum). It is responsible for the characteristic odor of garlic. Allicin is known to exert its effects as an antipathogenic agent mainly by targeting the thiol-containing proteins or enzymes in different microorganisms and also by regulating the key genes responsible for the virulence of the microorganism [1]. It may be considered as a wonder compound owing to its extraordinary ability to kill different pathogenic molecules. The volatile nature of allicin makes it very useful for fighting and eliminating pulmonary infections. The study by Dwivedi et al. entitled “Allicin enhances antimicrobial activity of macrophages during Mycobacterium tuberculosis infection” discusses the antimycobacterial properties of allicin and the major role it plays even while treating drug-resistant mycobacterium organism which makes this compound gain huge attention [2]. This study reports that allicin not only inhibits the internalization of Mycobacterium tuberculosis (M. tb) by blocking receptors on the surface but also eliminates the bacteria by its antimycobacterial killing mechanisms. The investigators have reported that allicin not only kills the bacteria but also acts as an immunomodulator inducing host protective immune response which protects the host by minimizing the side-effects and immune dampening caused by the conventional antibiotics treatment [2].

It is quite well known that allicin, was discovered in 1944 by Chester J. Cavallito and John H. Bailey as an antimicrobial compound derived from Allium sativum commonly known as garlic in households. They stated that garlic has been endowed with therapeutic properties, which according to them were major because of a sulphur containing compound which they called “allicin” [3]. With time, allicin became one of the most studied natural bioactive compounds due to its easy availability and the prohibitory effects it has on different infectious agents and not only bacteria. With so much of research going on it, it has been explored as an antimicrobial, antiinflammatory, anti-cancer, anti-viral as well as antiparasitic drug. It also has shown potent characters of being an immunomodulator thus acting as a two-way sword to combat infections and diseases. Furthermore, we have shown that allicin acts in multiple different and effective ways both in vitro and in vivo to protect against the deadly pathogen M.tb. As we all know, tuberculosis (TB) is the disease of the poor, effecting majorly the underdeveloped or developing countries. The current anti-tuberculosis therapy (ATT) consist of multiple antibiotics, is lengthy and causes severe toxicity in the person undergoing this treatment. Moreover, due to the long treatment regime and non-compliance with the treatment, which is quite common in the populations, we are heading towards the development of severe drug resistance in the M.tb populations giving rise to incidence of multi-drug resistant (MDR) and extremely drugresistant (XDR) strains. Recently, totally drug-resistant (TDR) strains have also been detected in the suffering masses [4]. As reported in this research paper, allicin not only kills drug-sensitive strains but is equally effective against drug resistant strains of M.tb, both in vitro and in mice model which is a quite promising outcome given that there are very few drugs for the treatment of drug-resistant M.tb; bedaquiline (SIRTUROTM) coming after almost 40 years to be approved for the treatment of MDR-TB [5]. Discovery of any drug or compound, which shows killing effect against drug- resistant M.tb, therefore, has immense value. The authors in this article show that allicin acts as an inhibitor of ICAM-1 receptor and reduces the percentage of M.tb internalization in the host macrophages at the first encounter with the pathogen; in addition to killing the intracellular bacteria in the macrophages after the initial entry. Although, it was earlier known that allicin is a potent ICAM-1 inhibitor but the fact that it restrains M.tb entry inside the host cell is fascinating [6]. Also, that it has the potential to kill drugresistant strains of M.tb, which could be quite promising in lands where the problem of TB is huge, and garlic is easily available and is quite affordable. Moreover, allicin and its derivatives have been reported to prevent the formation of biofilm in bacteria, which is one of the most important sources of bacterial resistance to the antibiotic treatment, by regulating quorum sensing [7]. Other than TB, which is the main topic of this discussion, garlic has proven to be quite effective in combating other infectious agents as well. A small discussion over the effect of garlic and its derivative allicin in other infectious diseases could add to the value of this commentary and give us better insight on its use as a potent drug candidate or as a combination therapy in future. Allicin has also shown to be quite impressive in terms of its efficacy when used to prevent other forms of infection like viral [8], fungal [9], parasitic [10] and other inflammatory diseases. It has also shown some promising results to kill tumor cells in cancer therapy [11]. A schematic diagram describing the therapeutic effects exhibited by allicin on different diseases has been included for a brief knowledge (Figure 1). 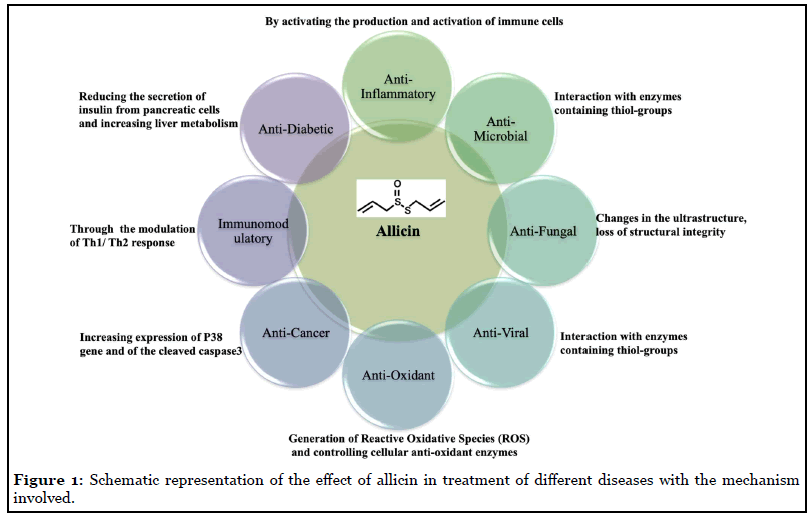 Allicin has somehow shown to be more conclusive and potent when used in combination with other drugs used in conventional treatment [12-14]. The reason may be that allicin treatment makes the microorganisms more vulnerable thus allowing antibiotics or antifungals to act on them and be more effective rather than acting alone. Therefore, a combination therapy of allicin with the conventional antimicrobial drugs may help reduce the treatment duration and thus may be quite helpful in preventing the evolution of drug-resistant variants. The antibacterial potency of allicin is comparable, to some conventional antibiotics such as penicillin, tetracycline and kanamycin [15-17]. Unlike the commonly utilized antibiotics, which are a pathogen-specific or narrow spectrum, allicin has an inhibitory effect on a broader spectrum of microorganisms encompassing bacteria (both gram-positive and negative), yeasts, fungi, parasites and even viruses [18]. Allicin has been reported to reduce inflammation and oxidative stress in case of dengue virus infection [19]. It has also been used for the treatment of genital warts caused by human papillomavirus (HPV) [20]. We have also explored the immunomodulatory properties and cytokine response associated with the treatment of infected mice with allicin. Moreover, we have shown enough evidence to prove that treatment with garlic extract significantly reduced the bacterial burden in mice and no viable M.tb bacilli were observed 60 days post-treatment with either allicin or with garlic extracts. When administered together with the standard M.tb drug isoniazid, the bug was cleared within even a shorter period, which is 45 days. This is when isoniazid alone takes more than 60 days to effectively clear the infection. This result has huge promises and hints at the possibility of shortening the duration of DOTS (Directly Observed Treatment, Short-course) treatment, taking us towards the first step of reducing the emergence of drug-resistance. Apart from this, garlic extracts or allicin also have been shown to inhibit S.aureus and E.coli and their drug resistant strains, which causes gastrointestinal problems and food poisoning [21]. Recently, Leontiev et al. have synthesized various analogues of allicin and tested their efficacy against a broad spectrum of bacteria and fungi. These analogues were found to possess the enhanced anti-microbial activity and worked synergistically with various other antimicrobial drugs [22]. Coming towards the immunological consequences of taking garlic derivatives as combination therapy along with the DOTS treatment regimen, we have argued that treatment with garlic extract has very minimal effect on the predominance of CD4+ and CD8+ T cells but still is higher than that of isoniazid treatment alone. Tousif et al. have reported that isoniazid treatment induces apoptosis of activated CD4+T cells [23]. Here, in our study, we have confirmed that garlic reverses these adverse effects reducing the side effects of DOTS therapy. This could be used in patients undergoing DOTS treatment or they may be advised to take garlic throughout treatment to continuously keep boosting their immune system and negate the chances of reactivation or relapse of TB, which is the major drawback associated with DOTS therapy. Furthermore, we have also shown that there was an enhanced production of IL-12 compared to only infected and isoniazid treated animals with the level of IL-10 and TNF-α which were found to be comparable in all groups. Thus, our study reports that garlic extract/ allicin acts as an immunomodulator in TB infection taking the T-cell polarization towards protective T helper 1 (Th1) response. It has previously been reported and extensively studied that garlic and its derivative allicin enhance the pro-inflammatory immune response in other forms of infection as well, like malaria and provide host protection [24-26]. This study recommends prescribing standardized doses of allicin to TB patients or anyone with low immunity to boost and maintain the homeostasis of their immune system. Thus, allicin plays antibacterial as well as immunomodulatory role during M.tb infection by an increase in the phosphorylation of SAPK/JNK in allicin-treated macrophages with the inhibition in the activation of p38-MAPK. These pathways seem to be very crucial for allicin while acting as an immunomodulator to induce the secretion of pro and anti-inflammatory cytokines. These results are quite intriguing considering the country we live in, which has a heavy burden of TB infected population.

Therefore, considering the importance of the research done on allicin or garlic extract, both in M.tb and other diseases, it would be very interesting if its effects in humans as an adjunct therapy during DOTS treatment could be studied. Because, of late, antibiotics and other commonly prescribed drugs available have displayed undesired symptoms and have led to the emergence of resistant, more deadly pathogenic strains. The toxicity related to these drugs and withdrawal symptoms confronted by the person undergoing the treatment has restricted their use in several nations. Therefore, it would be very beneficial if we could derive some antimicrobials from the herbal extracts and pharmacologically active molecules from plants which have been used in traditional medicines since ancient times. Also, it would be very informative if the effect of allicin on the innate immune system including autophagy could be studied as these innate immune processes are very essential for the complete eradication of the disease. As we all know, latent TB or dormancy forms the most terrifying component of TB pathogenesis wherein the infected person remains asymptomatic, without showing any signs of active TB. The bacteria uses special niche which is Mesenchymal Stem Cells (MSCs) for its survival and programs these cells to attain dormancy inside the host [27]. These dormant M.tb are phenotypically drug-tolerant and are not killed by isoniazid alone. But, the latently infected population serves as a huge reservoir for the reactivation of TB disease which may pose a pandemic. Thus, any mechanism or drug which could act on these drugtolerant population is the need of the hour. Therefore, it will be very interesting to study the outcome of allicin treatment in these latent, drug-tolerant bacteria. This could thus serve as a miraculous discovery for mankind and the whole of humanity.