Copyright © 2022 Wang KY, et al. This is an open-access article distributed under the terms of the Creative Commons Attribution License, which permits unrestricted use, distribution, and reproduction in any medium, provided the original author and source are credited.

Introduction: Imatinib therapy for gastrointestinal stromal tumors (GIST) rarely can cause pigmentary changes. When associated with sensitive areas such as the face, it can cause significant psychosocial impact and efforts should be made to correct it. Here we describe a case of hypopigmentation affecting the face in an African American female with concurrent development of neutropenia with resolution upon dose reduction of imatinib.

Imatinib is a selective inhibitor of the bcr-abl tyrosine kinase making it a potential treatment of chronic myelogenous leukemia (CML), as well as a selective inhibitor of KIT protein tyrosine kinase, and PDGF receptor, and is the treatment of choice in patients with gastrointestinal stromal tumors (GISTs) [1]. If GIST tumor is localized or potentially resectable, surgery is conducted with the goal to achieve complete resection with histologically negative margins. However, even with complete resection, at least 50% of patients in high risk GIST develop recurrent or metastatic disease with median time of about 2 years [2]. Multiple randomized studies demonstrate improved recurrence free survival (RFS) with imatinib as adjuvant treatment following surgery for intermediate or high risk GIST [3]. However, imatinib is known to cause dermatological side effects in CML with hypopigmentation being relatively common; this was studied in a case series (6 CML patients), a retrospective study (occured in 33%, 8/24 patients treated), and two prospective studies (occurred in 7/9 dark skinned individuals and 48/118 individuals respectively) [4-7]. This side-effect was generally shown to be dose dependent with higher doses having a higher frequency and severity of reaction [6]. The hypopigmentation also appears to be reversible with dose interruptions and discontinuation causing skin darkening and reinitiation causing skin lightening [4,5]. Hypopigmentation with imatinib for GIST tumor patients, however, have been rarer with fewer cases reported on literature review and none that demonstrated concurrent development of hematologic side-effects. Here, we describe a case of a hypopigmentation and neutropenia in a patient who received imatinib for a large gastric GIST tumor.

Patient was started on imatinib at the standard dose of 400 mg daily and around 1 month later was noted to develop a hypopigmented patch on the left cheek and hypopigmentation of the hands (Figure 1). Patient denies itching, burning, or pain and given the asymptomatic nature, she declined skin biopsy. She denies family history of skin disorders. A complete blood count (CBC) with differential revealed decreased white blood cell count of 2800/mm3 with absolute neutrophil count (ANC) of 1500/mm3 indicating neutropenia (Table 1). This was decreased from a normal white blood cell count prior to imatinib. Given the sensitive location of the hypopigmentation and neutropenia, the decision was made to reduce the dose of imatinib to 200 mg daily. In a 2 week follow up, the patient's hypopigmentation improved and in a 3 month follow up after that, the patient's skin changes resolved. Repeat CBC showed improvement normalization of the white blood cell count to 3900 and an ANC of 2300/mm3. Based on these clinical findings, it was determined the hypopigmentation was drug-induced. Patient remains disease free progression on repeat CT imaging on imatinib 200 mg for over 1 year since diagnosis. 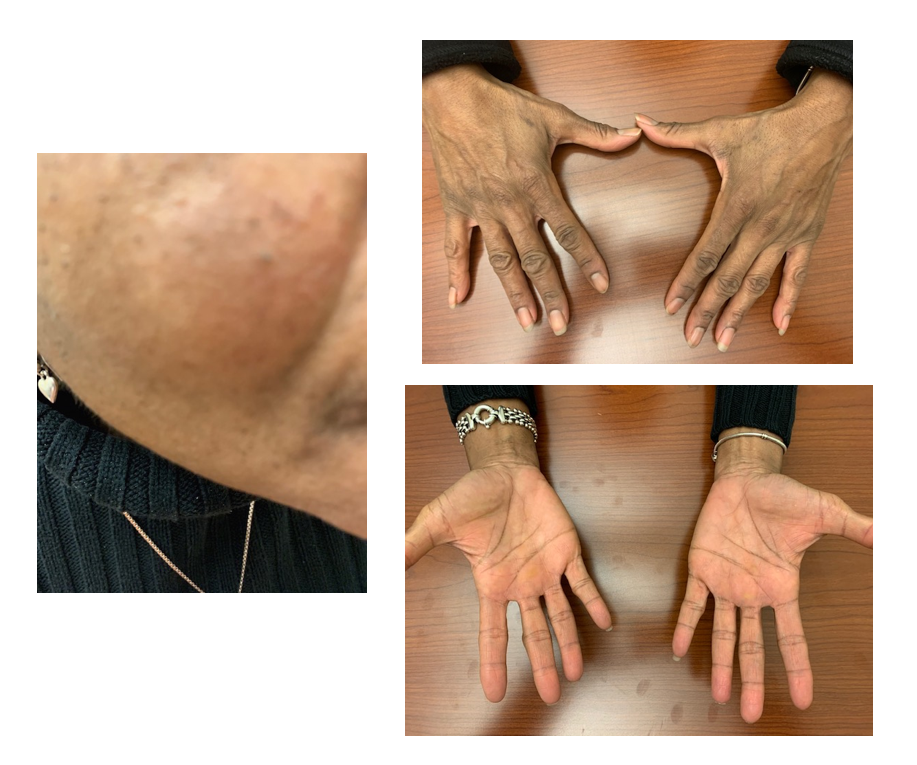 Figure 1. This figure demonstrates the hypopigmentated patch on patient’s cheek and hypopigmentation over the hands.

Skin rashes affect up to ? of GIST patients receiving imatinib, however it usually presents as an erythematous morbilliform/maculopapular rash that is often pruritic and affecting the forearms or trunk [8]. However, skin and hair color changes related to imatinib for GIST tumor are relatively rare [8]. On literature review, there were only 3 cases found specifically of hypopigmentation with imatinib used for GIST tumors in patients without germline KIT mutations causing familial GIST [9,10,15]. Results are summarized in Table 2. The first case involved marked hypopigmentation of the distal digits and mild generalized body hypopigmentation in an African American male, the second case involved generalized hypopigmentation in a Chinese female with new onset Hori nevus like hyperpigmentation on malar areas, and the third case involved a male with suspected familial GIST but negative germline mutations with decreased speckled lentiginous nevi following imatinib therapy [9,10,15]. Other cases involved patients with germline KIT mutations which often cause congenital nevi, hyperpigmentation, and multiple GIST tumors and treatment with imatinib resulted in fading of nevi, reduced hyperpigmentation, and decrease/stability of GIST tumors [11-14] (Table 2). Imatinib has also been rarely associated with hyperpigmentation which was shown to affect both the skin and the palate of patients in GIST tumors [16-19]. Mechanistically, hypopigmentation is likely related to the KIT protein kinase signaling pathway which has been implicated in melanocyte activation; KIT expression by melanocytes is reduced in epidermis affected in vitiligo which could explain the hypopigmentation effect seen with imatinib which causes KIT inhibition [20]. Hyperpigmentation, on the other hand, is less well studied and may be related to the breakdown products of imatinib causing chelation of melanin [21]. Hyperpigmentation may also be related to blockage of KIT causing paradoxical activation of precursor melanocyte cells to differentiate and produce melanin [10].

In our case, the patient presented with hypopigmentation but is confounded by a reported history of sarcoidosis. It is important to not dismiss this reaction as related to sarcoidosis, however. While sarcoidosis can cause hypopigmentation, lesions are usually well-demarcated papules, macules, or plaques while our patient presented with more diffuse hypopigmentation [22]. Patient also never had a biopsy, which is the gold standard for diagnosis of sarcoidosis [23]. To assess the probability of imatinib associated skin rash, the Naranjo probability scale was used [24]. This involves a questionnaire of 10 questions to determine the probability of drug-induced rash with a score of greater than 9 indicating definite association, score of 5-8 indicating probable association, score of 1-4 indicating possible association, and score of 0 indicating unlikely association (Table 3). For our patient, we scored 3 indicating a possible drug-induced reaction. This was mainly because sarcoidosis induced was possible or the score would be 5 which would indicate probable. The grade of the rash based on Common Terminology Criteria for Adverse Events (CTCAE) version 5 was grade 2 which is defined as hypopigmentation or depigmentation covering >10% BSA with associated psychosocial impact. Given the sensitive nature of the rash affecting the patient's face and neutropenia, we determined that a reduction in dose of imatinib would provide the best way to reduce the likely side-effect. A previous case report has demonstrated reduction of dose of imatinib can be used in a patient with neutropenia and severe exfoliative dermatitis with resolution of symptoms and without progression of disease even on 100 mg of imatinib [25]. In our case reduction of imatinib dose resulted in complete resolution of her hypopigmentation and the reduced dose of imatinib at 200mg also proved to be effective in her treatment of GIST tumor.

A rare side-effect that may occur with imatinib treatment for GIST tumors is imatinib induced hypopigmentation. While this has been common in patients with CML, cases are rarer after treatment with GIST tumor, especially in patients without germline KIT mutation. It is important to note the sensitive nature of hypopigmentation especially as it relates to the face in dark skinned individuals. While other skin conditions may confound the issue, use of the Naranjo scale can help clarify whether it is more likely to be drug induced. Reduction of the dose of imatinib can serve as one option in order to reduce skin-related side-effects in patients. Limitations in this case report include the rarity of hypopigmentation changes in GIST tumors treated with imatinib. Further studies are also needed to strengthen the correlation as well as to better elucidate the mechanisms involving pigmentary changes related to imatinib.

2. Eisenberg BL, Judson I. Surgery and imatinib in the management of GIST: emerging approaches to adjuvant and neoadjuvant therapy. Ann Surg Oncol 2004;11:465-475

4. Aleem A. Hypopigmentation of the skin due to imatinib mesylate in patients with chronic myeloid leukemia. Hematology/oncology and stem cell therapy. 2009 Apr 1;2(2):358-61.

In this study, the safety and efficacy of liver biopsies performed by endoscopic ultrasound (EUS-LB) were compared with those performed via the traditional percutaneous route at our Medical Center between January 2018 and August 2019.

Gastric GIST with 13 kg in Asymptomatic Patient: A Rare Case of Giant GIST and Literature Review

Although gastrointestinal stromal tumors, GISTs, are the most common neoplasms arising from the gastrointestinal mesenchyme, they represent less than 1% of all digestive tumors. Its incidence has increased in recent years, probably due to improved diagnostic methods. It is currently known that GIST is the most common sarcoma. It originates from interstitial cells of Cajal and depends on the transcription factor ETV-1. These are neoplasms associated with molecular alterations and some mutations.

Cardiac amyloidosis (CA) is a progressive disease affecting the normal cardiac structure and function. CA could be isolated or associated with a spectrum of organ involvement, including the kidneys, lungs, nervous systems, bones, and others.