Copyright: © 2021 Tatetsu H, et al. This is an open-access article distributed under the terms of the Creative Commons Attribution License, which permits unrestricted use, distribution, and reproduction in any medium, provided the original author and source are credited.

Currently, there is a growing need for culturing hematopoietic stem/progenitor cells (HSPCs) ex vivo for various clinical applications such as HSPC transplantation and gene therapy. For many patients with hematologic, genetic, and immune diseases, HSPC transplants can be a life-saving treatment. There are over 20,000 patients in the US receiving HSPC transplantation yearly [1]. About two-thirds of these cases are autologous and the rest are allogeneic transplants. The sources of the HSPCs are from peripheral blood mobilized stem/progenitor cells (PBSC), cord blood (CB) and bone marrow (BM). Umbilical cord blood can be an excellent HSPC donor source; however, its use is severely constrained by the limited HSPC numbers in one single cord blood unit. Developing technologies that allow ex vivo expansion of cord blood will be highly beneficial for the clinical application of HSPC transplants. In addition, there is a growing need for culturing PBSC in vitro for transplant-related applications such as gene therapy or genome-editing via TALENs or CRISPR/ Cas9 [2,3]. Furthermore, the same PBSC in vitro culture technique can be used for HSCP expansion for poor autologous mobilizations to avoid additional collections. Establishing culture conditions that can maintain and expand HSPCs from PBSC ex vivo will be beneficial to these clinical applications.

Expansion of HSPCs in culture, in general, is at the expense of “stemness”. Since the fate of a HSPC is governed by genetic and epigenetic factors, and we and others have proposed that the fate of a HSPC can be redirected or reprogrammed through modifications of key factors. Many efforts have been applied to identify and understand the key players in HSPC cell fate switching process through celltype-specific gene expression profile, cellular surface markers and functional studies. Genes and pathways that are functionally linked to self-renewal of HSCs include CEBPα [4], Notch ligands [5,6], Angiopoietin-like proteins [7], SALL4 [8], homeobox protein B4 (HOXB4) [9], c-MPL [10], as well as various methods in HSCP expansion, such as the use of Prostaglandin E2 [11,12], Pleiotrophin [13], SR1 [14], UNC0638 [15], Pyrimidoindole derivatives [16], and TEPA [17,18] have been reported.

We have searched for a robust and short-term ex vivo culture condition that can maintain and expand PBSCs without the loss of their “stemness”. We utilized a 3- to 5-day assay that can be easily modified to use in the current clinical HSPC transplantation setting, and co-expression of CD34 and CD90 to identify compounds with potentials for PBSC expansion [19]. After surveyed 466 compounds, including multiple epigenetic modifiers, we have identified ten compounds to be positive hits based on the increased percentage of CD34+CD90+ cells. Five compounds were histone deacetylase inhibitors (HDACis), and they are trichostatin A (TSA), DLS3, valproic acid (VPA), vorinostat also known as suberanilohydroxamic acid (SAHA), and Merk60. Especially, treatment of CD34+ PBSCs with a single dose of TSA ex vivo yielded the greatest expansion (11.7-fold) of CD34+CD90+ cells when compared to the control group. Additionally, TSA-treated PBSC CD34+ cells had a statistically significant higher engraftment rate than the control-treated group in xenotransplantation experiments. 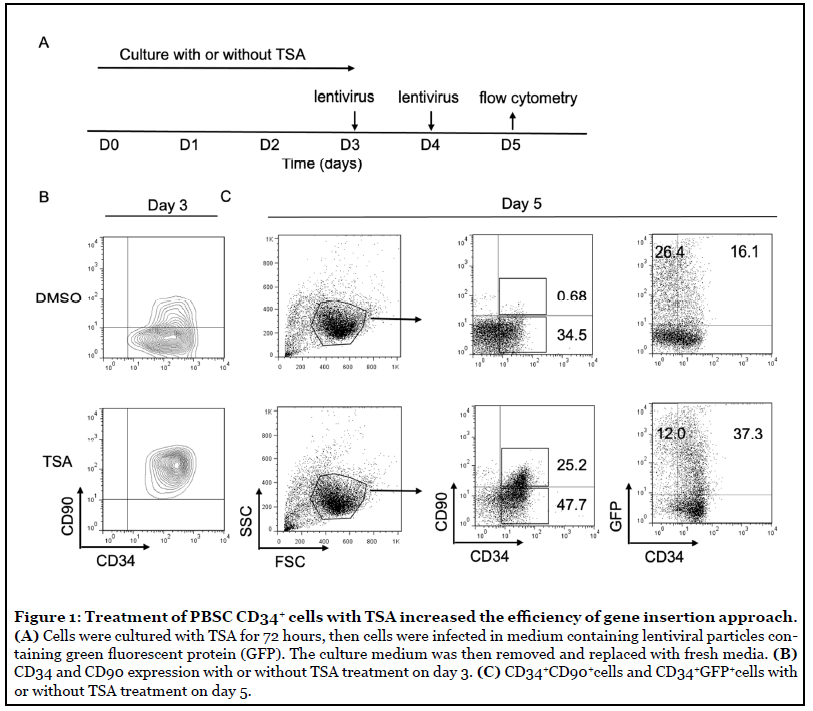 We are intrigued by the finding that HDACi is enriched as a class of molecules that can be used to expand HSPCs ex vivo. Since acetylation of histone tails can regulate the accessibility of transcription factors to DNA, increased acetylation is generally associated with an “open”, active state of chromatin, while hypo-acetylation is characteristic of a repressive chromatin state. This post-translational modification of histone tail is regulated by the opposing activities of histone acetyltransferase (HAT) and histone deacetylase (HDAC) enzymes. The HDACi treatments of cells in general lead to a more open chromatin and gene activation. We propose that since the HSPC fate is governed by key transcription factors, which are downregulated during HSPC ex vivo expansion; by adding HDACi to the culture medium, we can keep the chromatin in a relative “open” state, and maintain the expression of these key factors, therefore, maintain the “stemness” of the expanded HSPCs. We further demonstrate that among multiple key regulators involving in the self-renewal property of HSPCs, SALL4 is important for this TSA-mediated ex vivo CD34+CD90+ HSPC expansion process [19].

SALL4 was originally cloned based on its DNA sequence homology to the homeotic gene in Drosophila, spalt (sal) [20-23]. Several pieces of evidence support that SALL4 plays an essential role in maintaining the pluripotent and self-renewal properties of embryonic stem cells (ESCs). In adult mice, Sall4 expression is mostly restricted to germ cells, wherein it is highly expressed in undifferentiated spermatogonia and oocytes in primordial, primary, and secondary follicles [24-26]. Similarly, the expression of SALL4 in adult human tissue is restricted to the testis and ovary [27]. One exception to this expression pattern is human CD34+ (HSPCs) [28]. It has been reported that overexpression of SALL4 in mobilized peripheral blood CD34+ cells increased ex vivo expansion efficiency by more than 10,000 fold for CD34+/CD38- and CD34+/ CD38+ with appropriate cytokines [8]. Similarly, Shen et al. demonstrated SALL4B isoform expanded BM-derived CD34+ non-human primate HSCs [29] and Mossahebi- Mohammadi M. et al demonstrated that SALL4 lentiviral transduction causes a 6-fold change in total cell count CD133+HSCs compared to the control group [30]. In addition, Milanovich et al. mentioned SALL4 dose may important for functioning in murine hematopoiesis [31]. These studies indicate SALL4 is one of the key factors for the maintenance and enhancement of HSPCs.

Further studies are needed to understand the mechanism(s) SALL4 function in HSPCs and to apply for the clinical setting. The mechanism(s) of SALL4 in gene regulation, at least in part, is through its interaction with epigenetic complexes (also known as chromatin modifiers). SALL4 can function as a gene repressor and activator through its interactions with both gene-activating and repressing epigenetic complexes. More specifically, SALL4 can repress its target genes through its interaction with the Nucleosome Remodeling and Deacetylase complex (NuRD) [32-35], an HDAC-containing epigenetic repressor complex. It can also activate its target gene HOXA9 through its interaction with Mixed-Lineage Leukemia (MLL) protein [36], which is the key member of an epigenetic activator complex. It remains to be determined whether both the activation and repression functions of SALL4 are required for HSPC expansion, and the development of novel pharmacological tools to modulate these pathways could lead to new HSPC expansion technology.

The authors have no competing financial interests.