Copyright: © 2020 Valentini G, et al. This is an open-access article distributed under the terms of the Creative Commons Attribution License, which permits unrestricted use, distribution, and reproduction in any medium, provided the original author and source are credited.

We have recently published a case of spontaneous gastric decompression and resolution of an infected walled-off pancreatic necrosis (WOPN). According to the so-called “step-up approach”, which is a staged and multidisciplinary approach for the treatment of necrotizing pancreatitis, we have outlined the need of treating WOPN and their complications according to the clinical course of the patients and not only to radiological and laboratory findings. In the wake of these observations, we have recently observed another case of infected pancreatic necrosis complicated with fistulization not in the stomach, but in the duodenum, followed by complete resolution. So, in this work, we have described the case report and we have tried to make a brief revision of literature concerning treatment of gastrointestinal fistula complicating infected pancreatic necrosis, with particular regard to the “step-up” approach, used in our center.

We have recently published a case of spontaneous gastric decompression and resolution of an infected walled-off pancreatic necrosis, WOPN, demonstrating, in the form of a case report, that even shows such serious complications of acute pancreatitis, in the past, it was thought to be always amenable of intervention, could be prudentially observed because they can be resolved spontaneously [1].

According to the so-called “step-up approach”, which is a staged and multidisciplinary approach for the treatment of necrotizing pancreatitis, reserving intervention until really necessary, our case have outlined the need of treating WOPN and their complications according to the clinical course of the patients and not only to radiological and laboratory findings.

In the wake of these observations, we have recently observed another case of infected pancreatic necrosis complicated with fistulization not in the stomach, but in the duodenum, followed by complete resolution.

A 67-year-old female with a history of arterial hypertension and previous hysterectomy, was recovered, in July 2019, for moderately-severe acute biliary pancreatitis with evidence of stones in gallbladder and bile duct and pancreatic necrosis on imaging (Magnetic Resonance Cholangiopancreatography, Figure 1). A contrast enhanced CT, a week after the admission, showed necrotic areas in the pancreas and a large peripancreatic fluid collection (60 mm long) with air pockets within (acute necrotic collection, with signs of infection, Figure 2). Since she was haemodynamically stable and there was no evidence of organ failure, according to “step-up approach”, she was managed medically with antibiotics (piperacillin-tazobactam + metronidazole) and fluids. She underwent endoscopic retrograde Cholangiopancreatography (ERCP) with sphincterotomy for removal of bile duct stones and biliary stent placement. A repeat CT showed a reduction in the size of the fluid collection; the course of antibiotics was completed and the patient was discharged, planning an elective cholecystectomy followed by biliary stent removal. Two months later the patient underwent a new CT that showed persistence of peripancreatic collection (38 mm, Figure 3), with heterogeneous density, surrounded by a thick, well-defined wall, corresponding to WOPN. Strictly adjacent to the Treitz ligament; a fistulous communication between the WOPN and the fourth part of duodenum was shown too. Since she was completely asymptomatic and laboratory findings are normal (no increase in inflammatory parameters), we decided to maintain a conservative approach. The patient underwent a laparoscopic cholecystectomy, without any complication and, finally, the biliary stent was removed. A follow-up was planned in our specialized ambulatory for pancreatic diseases. The patient remained in good condition at 4 months, with no evidence of pancreatic fluid collection on follow-up imaging examination; since the collection has always been clearly visible with ultrasound, we decided to follow-up the patient with this type of imaging.

The patient signed informed consent; as it is a retrospective case report, ethics approval was not required for this article. 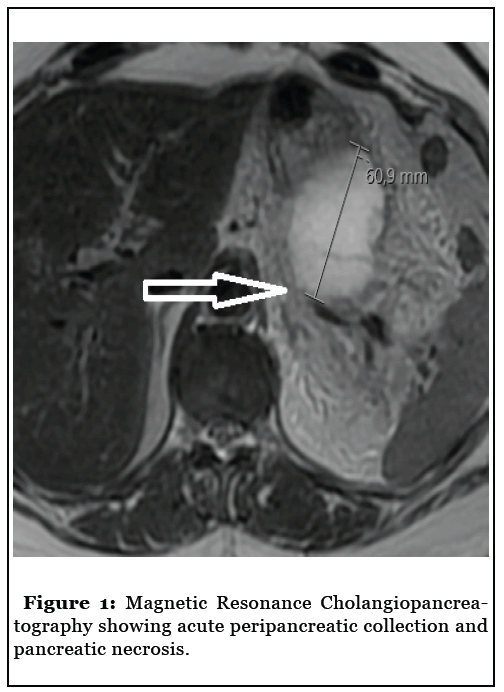 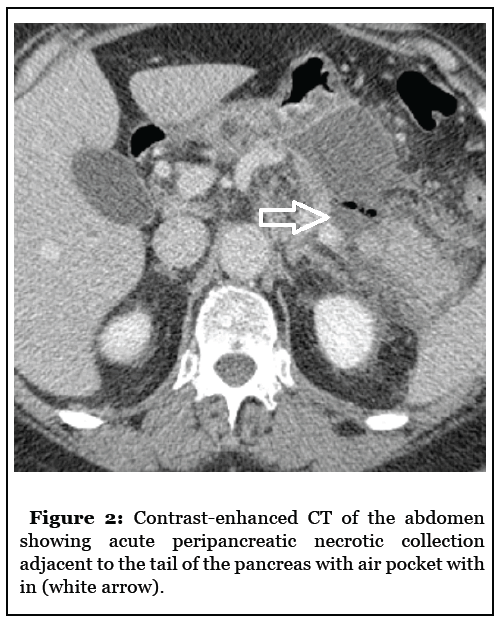 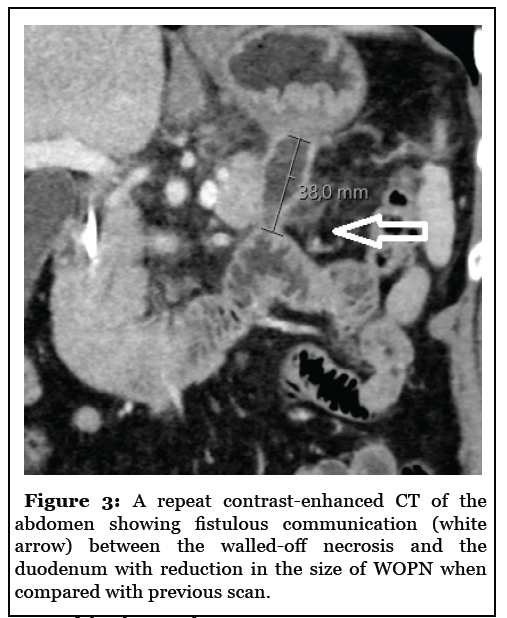 The 2012 revised Atlanta Criteria defined three grades of severity and two types of acute pancreatitis (AP) [2]. Mild AP is self-limiting, does not lead to organ failure and is not associated with local or systemic complications. Moderately severe AP causes organ failure that resolves within 48 hours and/or is associated with local complications such as fluid collections, or causes exacerbations of comorbid conditions. Severe AP is defined by persistent single or multiple organ failure lasting more than 48 hours. Two separate types of pancreatitis were redefined in 2012 as acute edematous pancreatitis and acute necrotizing pancreatitis, the latter often resulting in a significant inflammatory response and greater potential for a superinfection. Approximately 5% to 10% of patients develop necrotizing pancreatitis. If fluid and necrotic pancreatitc or peripancreatic debris form collections within four weeks of presentation, they are termed as acute necrotic collections (ANC). After four weeks, these collections mature, become encapsulated and are termed walled-off pancreatic (and/or peripancreatic) necrosis (WOPN). WOPN can be in a number of locations throughout the abdomen in various pattern and sizes and can be either sterile or infected. Infected WOPN may, on the other hand, be complicated by fistulization to the stomach, small bowel and colon [3,4].

Infection of WOPN is usually thought to occur due to either bacterial translocation from gastrointestinal tract without gross erosion, or by direct fistulization of the WOPN into the gastrointestinal tract [5]. Gastrointestinal fistula, on the other hand, is one of the well-recognized complications secondary to severe AP [6]. Depending on the size of the fistula, it may involve either the stomach, duodenum, jejunum, ileum and colon, either in combination or separately. It may result due to direct erosion from digestive enzymes released by the inflamed pancreas in adjacent GI tract, or as a consequence of the intestinal necrosis due to vascular thrombosis in an area of inflammation or infection. Additionally, GI fistulas may be associated with surgical intervention. Although previous studies suggested that the fistula of GI tract occurs infrequently in AP patients, infected pancreatic necrosis and the operative managements for it would increase the frequency. It has been reported that GI fistulas may cause exacerbation of infection, bleeding, obstruction and fatal outcome.

In 2014 Boopathy described the first case, to the best of his knowledge, of a spontaneous fistulization of an infected WOPN into the duodenum in a patient following acute necrotising pancreatitis, resulting in a complete remission of symptoms and resolution of collection [7].

Gastrointestinal fistulas continued to be reported in limited literature in the following years, until 2016, when Wey and colleagues published a very interesting work in which they evaluated the incidence and outcome of this type of fistulas in a large number of consecutive AP patients complicated with infected necrosis [8].

In this retrospective study, which enrolled 928 consecutive patients, the incidence of GI fistulas in AP patients was 12.8%. Similarly in other studies, colonic fistulas was the commonest form of GI fistulas observed and duodenal the second. According to the authors, the underlying mechanisms of this phenomenon could include: first, the anatomy characteristics of peritoneal reflection resulting in colon and duodenum more frequently affected directly; second, gut ischemia, as a result of low-flow state or hemodynamic response to sepsis, could be more commonly associated with colon; third, the stomach and small intestine have much better blood supply, which could provide a protective mechanism for preventing the formation of fistula [9].

They also observed that GI fistulas were associated with more severe disease course and more organ failure. On the other hand, GI fistulas could potentially benefit the patient by draining infected necrosis, often in form of WOPN, into GI tract and most of them could close spontaneously with proper nonsurgical management, except, approximately 70% of colonic fistulas needing surgical intervention. Surgery has, in fact, been considered the treatment of choice of colonic fistulas, regarding the risks of colonic perforation, spontaneous or persistent infection, or overwhelming sepsis and massive hemorrhage.

In 2018 Koziel reported another case (described by the author as rare), of spontaneous fistulization in duodenum of a large WOPN previously treated with endoscopic ultrasound-guided transmural drainage and lumenapposing metal stent placement in the gastric wall [10]. The author hypothesized that the patient experienced spontaneous fistulization of WOPN to duodenum most likely caused by the inefficient passive drainage through the gastric transmural access.

Finally, in 2019, Shen and colleagues published an interesting work about the outcome of a particular type of duodenal fistulas, infected pancreatic necrosis associated duodenal fistula (IPN-DF), that was rarely reported in literature. Their retrospective cohort study was mainly focused on the management and outcomes of IPN-DF in the era of minimally invasive techniques. One hundred and twenty-one consecutive patients with infected pancreatic necrosis were enrolled: 10 developed duodenal fistula and nine had their fistula resolved spontaneously over time, by means of controlling the source of infection with the use of minimally invasive techniques; no open surgery was performed. The authors concluded that IPN-DF could be managed successfully using minimally invasive techniques [11].

Another aspect to be considered for the management of pancreatic necrosis is the so-called “step-up” approach. This term was coined for the first time in 2010 with the PANTER trial, from the Dutch Acute Pancreatitis Study Group and was initially applied as a less-invasive approach alternative to surgical open necrosectomy for infected pancreatic necorsis; it consisted of percutaneous drainage followed, if necessary, by minimally invasive retroperitoneal necrosectomy. This less-invasive approach led to a reduction in morbidity and mortality, with superiority over more invasive ones, demonstrated also recently at a long-term follow-up [12,13]. The management of infected necrotizing pancreatitis has changed dramatically during the last 10 years and continues to evolve with growing expertise, new techniques and ongoing research efforts. It is clear, when possible, that a more conservative approach improves outcomes. This includes using antibiotics, delaying interventions, starting with less invasive interventional strategies when possible and upgrading as necessary. Choosing the most appropriate treatment is a multidisciplinary decision because it uses techniques that span the departments of gastroenterology, surgery, radiology and critical care.

We have recently published a brief and practical review on the management of Acute Pancreatitis and its complications, outlining the importance of basing treatment on clinical evolution, reserving invasive procedure until really necessary [14].

Taking this into account, we reported another case of spontaneous GI fistulizazion (into the duodenum) of an infected pancreatic necrosis which resolved completely without needing of intervention. A correct management of this complication requires, on the other hand, a good knowledge of literature regarding the problem, a multidisciplinary approach and expertise in treating AP patients. Cases such as this reinforces the idea that the clinical course of patients with WOPN should dictate the need for any intervention. As demonstrated here, even fistulization to the GI tract can potentially lead to resolution rather than complications and the “step-up” approach to patients with WOPN can limit the morbidity of intervention to those individuals in which the clinical course of disease dictates its necessity.

Informed consent was obtained from the patient for the publication of her information and imaging.