Repurposing of an Antifungal Drug against Gastrointestinal Stromal Tumors

Copyright: © 2021 Arulanandam CD, et al. This is an open-access article distributed under the terms of the Creative Commons Attribution License, which permits unrestricted use, distribution, and reproduction in any medium, provided the original author and source are credited.

Drug discovery is an important research area to improve human health. Currently, treatment of gastrointestinal stromal tumors (GISTs) is unsuccessful due to drug-resistance, hence, there is a demand for alternatives. Often, there is limited time available for toxicological assessments and a lack of safer drugs. But, it is possible to identify new drugs from existing approved drugs possessing another medical application. In this molecular docking study on the selected antifungal and antineoplastic drugs were performed against against GISTs based on docking affinity of human platelet-derived growth factor receptor alpha (PDGFRA) with these drugs to identify a suitable PDGFRA inhibitor for saving the time required for toxicity screening. The protein and ligand-binding affinity were investigated for five FDA approved antineoplastic and thirty-six antifungal drugs against PDGFRA using the AutoDock (AD) and AutoDock Vina (ADV) open-source software. Based on docking score and inhibition constant (Ki), Itraconazole was predicted as a better PDGFRA inhibitor among all the computationally tested drugs.

The molecular docking tool AD and ADV was used to study small macromolecules in order to discover lead compound. This in silico screening is an already established approach in computer-aided drug discovery [19-22]. A docking experiment with 36 antifungal drugs and 5 antineoplastic drugs was made by screening the receptor and ligand interactions using AD and ADV.

Cygwin was used to perform AD and ADV molecular docking in the Windows operating system [23]. Cygwin Packages are publicly available for docking operations at https://www. cygwin.com.

AD 4.2 suite is a open-source software for molecular docking and computational docking. This suite includes several complementary tools [24]. ADV provides a straightforward scoring function and rapid gradient-optimization in the conformational search. ADV tends to be faster than AutoDock 4 by orders of magnitude [25]. In the docking experiment, the grid box dimension values were adjusted up to dimensions (in ångström) Grid center X:68.8375, Y:37.8355, Z:3.108 Grid Size X:33.7535, Y:33.7535, Z:33.7535 with an exhaustiveness value=8. All the compounds were docked separately against the targeted human PGDFRA (PDB ID-5K5X) and the compound screened based on binding energy of receptorprotein complex. Docking score and hydrogen interaction patterns visualized by the BIOVIA Discovery Studio (DS) and 2D Ligand interaction diagram given for the screened drug [26]. The 2D graphical representation of screened compounds was obtained from BIOVIA DS based on the best binding energy from the tested antifungal and antineoplastic drugs.

Human PDGFRA is built of a single subunit (Figure 1). The crystal structure of human PDGFRA was acquired from Protein Data Bank as PDB format (PDB ID: 5K5X) with PDGFRA classified as a transferase in the RCSB PDB database accessible at web server https://www.rcsb.org/. Before preparing the protein PDBQT format in AutoDock, the structure of the target protein was validated using the software MolProbity [27]. This server is accessible from http://molprobity.biochem.duke.edu. Based on this server report, the protein structure was solved by X-ray diffraction at 2.168 Å resolution with R-value work = 0.192; R-value free = 0.224. It has one unique chain (chain A) and in total 345 residues and 151 hetero-groups. 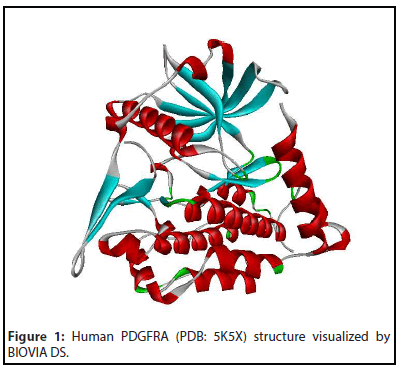 MarvinSketch was used to generate the 3D structures of the test compounds from the chemical drawing (https:// chemaxon.com). 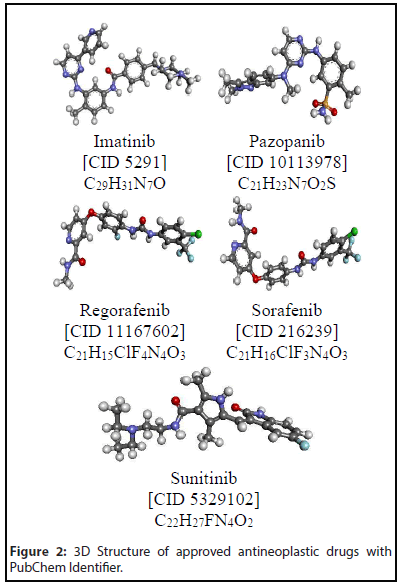 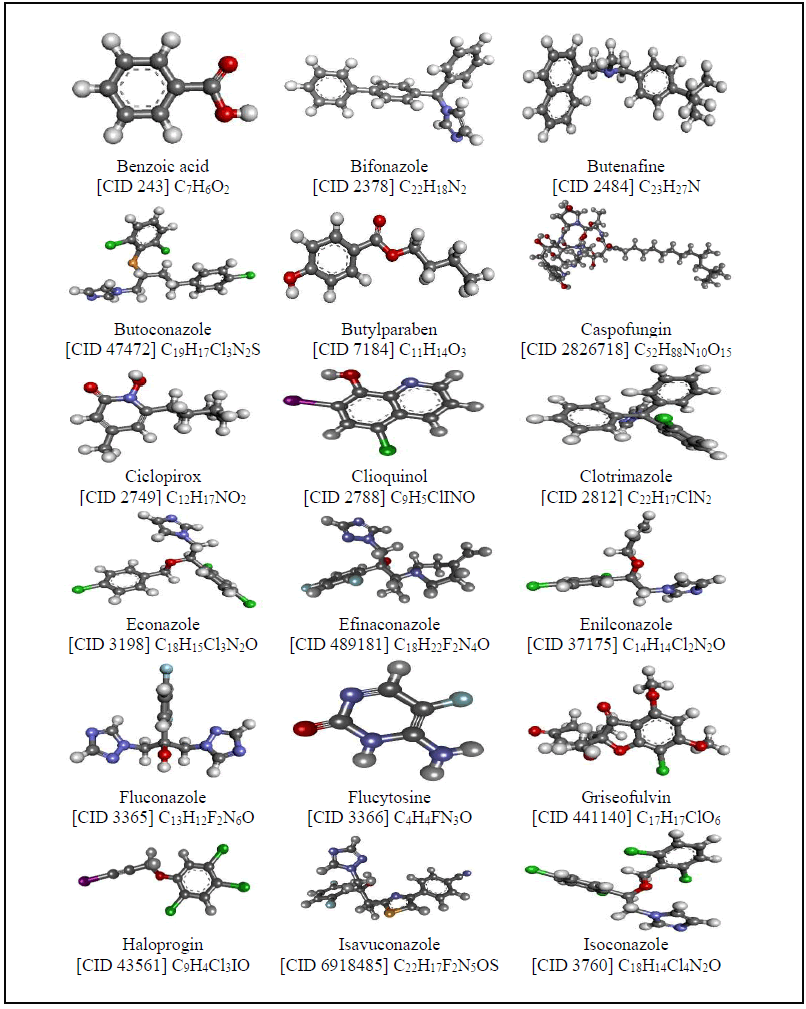 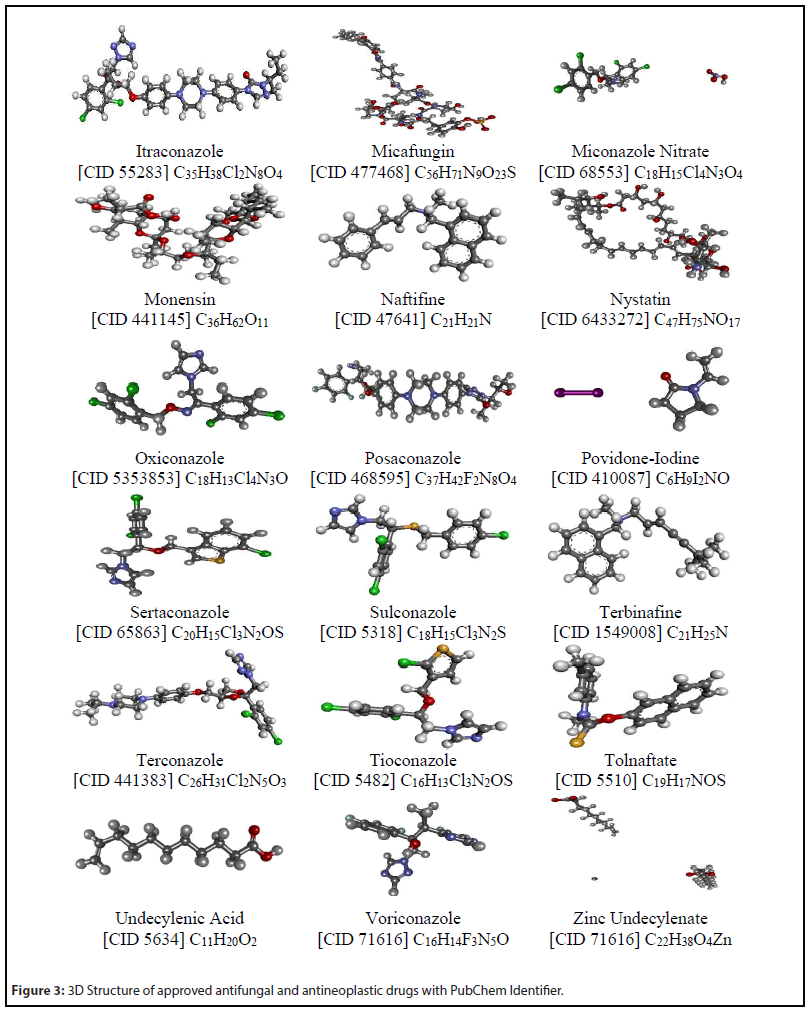 Five antineoplastic compounds were obtained from the PubChem database. All the tested compounds were downloaded in the 3D format as SDF files. BIOVIA DS was used to visualize and convert 3D SDF files into the PDB file format for AD Vina compatibility as shown in (Figure 2).

Currently, the therapeutic switching of existing antifungal drugs used for anti-cancer applications could be used to demarcate alternative drug potentials for the improvement of cancer therapy. Non-cancer drugs demonstrated anticancer activity in preclinical trials [28]. In the present work, 36 antifungal drugs were studied for their potential binding affinity towards human PDGFRA. As shown in (Figure 3), the 3D structure of these antifungal drugs was obtained from the PubChem database. BIOVIA DS was used to convert SDF files into PDB format.

The antifungal drug Itraconazole with best binding energy and docking position was viewed in a 2D Ligand interaction diagram Figure 6. Here, the ligand interactions were presented with conventional hydrogen bonds at A585 positions of the ARG, Pi-Sigma interactions with two amino acids such as A-586 positions of TRP and A-965 position of ILE, and Alky interactions at A965 ILE and A: 831 ILE. 2D Ligand interaction diagrams for docking poses of Imatinib with target protein atoms are shown in Figure 7. The conventional hydrogen bond at A-623 LYS, unfavorable donor-donor interactions at A-833 position of LYS, Pi-Sulfur interaction at A-973 ASP, Pi-Anion interaction at A-622 MET, and Pi-Alkyl interaction at A-586 position of TRP. Based on the 2D diagram of Itraconazole and Imatinib interaction with PDGFRA protein. The structure of Itraconazole was modified as shown in Figure 8. It was designated as S1 and its IUPAC name was 1-(butan-2-yl)-4- (4-{[2-(2,4-dichlorophenyl)-2-[(1H-1,2,4-triazol-1-yl)methyl]- 1,3-dioxolan-4-yl]methoxy}piperazin-1-yl)-4,5-dihydro-1H- 1,2,4-triazol-5-one. From Imatinib, structure S2 (IUPAC name 1-benzyl-4-methylpiperazine was obtained as shown in Figure 9. Based on the AD and ADV, the docking score for S1 and S2 was not promising. It may be due to their molecular weight and length. So, from S1 and S2 structure, a structure S3 was proposed (Figure 10).

Its IUPAC name was 2-(4-{[2-(2,4-dichlorophenyl)-2-[(1H- 1,2,4-triazol-1-yl)methyl]-1,3-dioxolan-4-yl]methoxy} piperazin-1-yl)-10-methyl-8-[(4-methylcyclohexyl)methyl]- 1H,2H,3H,5H,10H-[1,2,4]triazolo[1,2-b]phthalazine-1,5-dione. Structure S3 showed -11.47 kcal/mol binding energy and 3.92 nM inhibition constant in AD. Binding energy was -11.0 kcal/ mol in ADV docking (Table 2). This predicted value was better than the Imatinib binding energy and inhibition constant for PDGFRA inhibition. The tyrosine kinase inhibitor (TKI) Imatinib interacts with five major CYP isoforms. Use of TKIs with other drugs that decrease absorption or induce metabolism of TKI may result in sub-therapeutic levels of the drug and bring about a decrease in TKI effect. To the contrary, drugs that inhibit the TKI metabolism may cause supra-therapeutic drug levels and toxicity. These interactions possibly lead to a loss of therapeutic effects of TKIs or cause severe to fatal side effects. The suggested antifungal drug-Itraconazole inhibits only two isoforms see (Table 3). Long-term use of Imatinib increases a potential drug-drug interaction risk. Itraconazole, can aid in lowering toxicity rates and providing efficient antitumor therapy.

Gastrointestinal stromal tumor (GIST) is a rare and therefore often neglected disease. Introduction of the kinase inhibitor imatinib mesylate radically improved the clinical response of patients with GIST; however, its effects are often short-lived, with GISTs demonstrating a median time-to-progression of approximately two years [30-31]. GISTs are commonly found in adult patients aged between 40 and 70 years with some rare cases of this tumor being developed in children and young adults with similar frequencies in men and women [32]. Despite significant treatment advances over the past decade, metastatic gastrointestinal stromal tumor (GIST) remains largely incurable. Rare diseases, such as GIST, individually affect small groups of patients but collectively are estimated to affect 25 to 30 million people in the United States alone. Given the costs associated with the discovery, development, and registration of new drugs, orphan diseases such as GIST are often not pursued by mainstream pharmaceutical companies [30,31]. Overall incidence of GISTs has been estimated as 10 to 20 per million with morbidity rate between 11 and 15 people per million [33,34]. A Swedish study estimated the frequency of GIST at approximately 14.5 cases per million population years, and an Icelandic study reported an incidence of 11 cases per million population years [35,36]. A study conducted in Alberta found the incidence rate of GISTs as 0.91 per 105 populationyears [37]. PDGFRA gene mutations that increase the risk of developing GISTs are inherited from a parent, leading to familial GISTs. Through signal transduction, RTK transmits signals from the cell surface into the cell. This activation of the PDGFRA protein then activates several other proteins through phosphorylation, ultimately, triggering a succession of proteins in various signalling pathways. In silico based therapeutic switching of drugs that are already utilized clinically to identify novel therapeutic uses is an upcoming approach as these FDA approved drugs are easily available on the market and have known pharmacokinetic as well as toxicological effects [38]. Therapeutic switching reduces the steps and costs required for drug development and approval processes considerably [39,40]. In this study, the screening of test compounds against PDGFRA showed a best binding affinity for Itraconazole (antifungal) with -9.6 kcal/mol in ADV. Itraconazole was shown to be active against another cancer, the non-small cell lung cancer [28,41]. It was repurposed as an anticancer agent and tested in clinical trials for the treatment of gastric, pancreatic, oesophageal, lung, prostate, and basal cell cancers recently [42]. However, there are no studies concerned with GISTs as yet. The binding affinity of the drug Imatinib (antineoplastic) was close to that of Itraconazole. Imatinib, the first targeted agent, represents a promising treatment modality in patients affected by GISTs and chronic myeloid leukemia (CML) [4]. Qiu and his co-workers suggest that genetic polymorphisms may influence the Imatinib-induced ophthalmological toxicities in GIST patients [43]. In addition, Imatinib has several recognized adverse effects, commonly comprising fluid retention with nausea, periorbital edema, abdominal pain, vomiting, muscle cramps, skin rash, headache, diarrhea, and dizziness [44]. The major drawback with Imatinib is resistance development which is therapeutically challenging [45]. The development of specific tyrosine kinase inhibitors, such as Imatinib mesylate, has led to a breakthrough in the treatment of advanced GISTs. Treatment with the drug Imatinib mesylate led to significant improvements in patient survival, with overall response rates in excess of 80% [46]. Itraconazole as a therapeutic agent against GISTs by inhibiting PDGFRA strongly supports the potential of clinical antineoplastic testing of repurposed drugs such as antifungal drugs. In this study, a suitable system of identifying and screening of PDGFRA inhibitors for the treatment of GISTs by repurposing FDA approved drugs using a molecular docking approach is proposed and demonstrated. Protein stability was checked and it key active site residues were identified. Analysis of ligands in the active site aided in the identification of key residues and their interactions for virtual screening. This holds for FDA approved drugs with PDGFRA inhibiting potential. Free binding energy scores based on the docking results showed that among antifungal drugs, Itraconazole had the highest binding energy and stability at the active site. Imatinib exhibited highest binding affinity among the selected antineoplastic drugs for PDGFRA inhibition. These results were validated by correlating the binding affinity from AD and ADV programs and this study. Thus, an as yet antifungal drug, Itraconazole, was shown to be a potentially better PDGFRA inhibitor than Imatinib as the official drug for this purpose. This result suggests Itraconazole for in vitro and in vivo and animal study to use this drug in GISTs therapeutics.

This work was supported by an International Student fellowship from Kaohsiung Medical University (KMU) to Charli Deepak Arulanandam.