Prospects of JAK Inhibition in the Framework of Bone Loss

Copyright: © 2021 Adam S, et al. This is an open-access article distributed under the terms of the Creative Commons Attribution License, which permits unrestricted use, distribution, and reproduction in any medium, provided the original author and source are credited.

Cytokine receptors may possess an intrinsic capability for the transduction of signals upon engagement by the respective cytokine ligand [1]. However, if they lack an own intracellular signaling entity, they rely on other signaling machineries. One of the key intracellular signaling molecules mediating cytokine effects on immune cells are Janus kinases (JAKs), which induce gene expression via signal transducer and activator of transcription proteins (STATs). In mammals, four JAK (JAK1, JAK2, JAK3 and Tyk2) and seven STAT proteins (STAT1, STAT2, STAT3, STAT4, STAT5A, STAT5B and STAT6) are described, which in varying combinations mediate signal transduction of well over fifty cytokines [2,3]. In the following article the role of JAK and STAT will be summarized.

This array of cytokines, which rely on the JAK/STAT machinery, contains proinflammatory mediators, many of which are relevant for inflammatory diseases, such as rheumatoid arthritis (RA). RA is a chronic autoimmune disorder, characterized by a persistent symmetric polyarthritis and synovitis [4,5]. Inflammatory cytokines relevant to the pathogenesis of RA, utilizing the JAK/ STAT pathway, include interleukin-6 (IL-6), IL-7, IL-10, IL-12, IL-15, IL-21, IL-23 and interferons (α, β and γ) [6,7]. Consequently, JAK inhibitors have pursued their way into the clinical practice. Currently, in the USA and the EU three JAK inhibitors have been approved for the treatment of RA, tofacitinib, baricitinib and upadacitinib and a fourth, filgotinib, is about to follow [8-14]. Tofacitinib, conceptually a pan-JAK inhibitor, targets primarily JAK1 and JAK3, while baricitinib inhibits JAK1 and JAK2 [8,13,15-17]. Upadacitinib and filgotinib specifically suppress JAK1 activity [18,19]. McInnes et al. demonstrated differences in the pharmacokinetic profiles of tofacitinib and baricitinib, as well as varying in vitro pharmacology profiles, which highlights their differing substrate specificities [17]. Moreover, a meta-analysis in 2020 compared the efficacy of multiple JAK inhibitors with adalimumab in RA patients on methotrexate background therapy. The authors confirmed that, compared to adalimumab, both baricitinib and tofacitinib exhibit higher probability of achieving ACR20 responses. However, RA patients receiving baricitinib additionally benefited from a significantly higher ACR50 response rate compared to adalimumab therapy [20]. RA patients generally respond well to all JAK inhibitors, which may be based on their inhibition of multiple inflammatory cytokines instead of just one, as the JAK/STAT machinery is shared by several cytokines [21,22].

Less is known about the role of JAKs on bone homeostasis. However, the role of the JAK/STAT pathways on the immune system inevitably suggests that bone metabolism will also be influenced by JAKs [23]. Preclinical studies have shown that mice knocked out for STAT1 display an increased bone mass [24-26]. Moreover, global STAT3 knockouts are lethal [27]. However, when specifically knocked out in osteoblasts and osteocytes, STAT3 deficient mice develop osteoporosis [28,29]. The clinical relevance of STAT3, as a signaling mediator in bone metabolism, is manifested in the Job’s syndrome, which is the result of a mutation in the STAT3-DNA-binding domain [30-33]. Patients with Job’s syndrome develop, among other symptoms, a bone phenotype: The number of bone-degrading osteoclasts is increased and bone mineral density is reduced. Patients suffer from recurrent fractures, due to increased bone fragility as a consequence of poor bone quality [23,30,32,34-36].

As JAKs and STATs primarily regulate immune function, these molecules and their inhibitors may also affect bone homeostasis during inflammatory diseases [37]. In RA, for instance, local and systemic bone loss develop, which require treatments that not only influence inflammation but also maintain or even restore bone mass [38-40]. There have been indications that JAK inhibitors may pose a beneficial impact on bone metabolism. For instance, Orsolini and colleagues suggested tofacitinib as a mean of limiting bone loss during chronic inflammatory diseases, such as RA and psoriatic arthritis [41]. However, the osteometabolic properties of JAK inhibitors have been systematically studied only recently.

We conducted a preclinical analysis of the impact of JAK inhibition, by tofacitinib and baricitinib, on bone homeostasis in steady-state conditions and during pathological challenge by non-inflammatory bone loss (postmenopausal osteoporosis) and inflammationmediated bone loss (serum transfer arthritis) [42]. In all three models, JAK inhibitors consistently increased bone mass, predominantly of the trabecular compartment. As the numbers of osteoclasts and osteoblasts were unaffected by JAK inhibitor treatment, we suspected a functional influence of JAK inhibition on bone cells.

Therefore, we separately investigated the effect of JAK inhibitors on bone-degrading osteoclasts and boneforming osteoblasts in in vitro cultures. While osteoclasts were not directly affected by JAK inhibitors, JAK inhibition enhanced the mineralization capability and activity of osteoblasts. Whole transcriptome analysis of osteoblasts revealed induction of an osteoanabolic gene signature by JAK inhibitors enhancing the anabolic Wnt signaling pathway (Figure 1). When analyzing JAK/STAT interactions, we found no effect on STAT1-activation but almost complete abrogation of STAT3-activation by JAK inhibitors. Importantly, we explored RA patients for signs of bone repair, after having received JAK inhibitors for at least two years. High-resolution peripheral quantitative computed tomography (HR-pQCT) revealed repair of bone erosions in their hand joints of these patients. 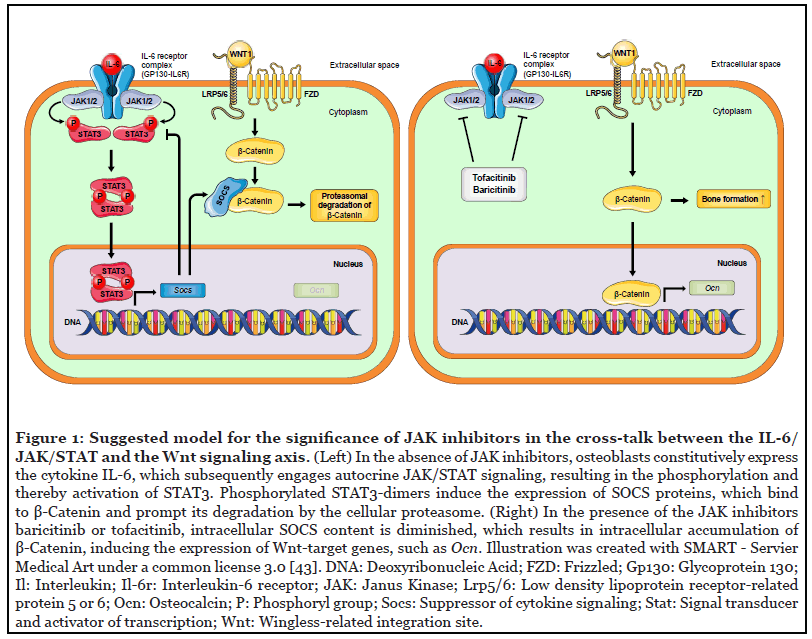 It has been demonstrated that the osteoblast- and osteocyte-specific knockdown of STAT3 reduced bone mass and quality [28,29]. Therefore, we did not expect to find STAT3 downregulation being involved in JAK inhibitor-mediated effects on osteoblasts. However, one has to keep in mind, that even a cell-specific knockout of a universal signal transducer, such as STAT3, may exhibit different effects compared to the targeted downregulation of an upstream JAK protein. In the case of JAK inhibition STAT3 is still present and able to engage in signal transduction, as long as the inducing cytokine utilizes a JAK protein, not targeted by the drug. Since STAT3 is a prominent mediator of cytokine signaling of the IL-6 family of cytokines, which have been described to dampen osteoblast activity, we suspect that JAK inhibitors enhance osteoblast mineralization by interfering with IL-6 signaling [44]. Reduction in IL-6 signaling diminishes STAT3- mediated transcription of target genes, such as Rankl and Socs, which would otherwise engage mechanisms to counter bone formation [42,45].

Moreover, the effects of JAK inhibition need to be seen in a systemic context: While the in vitro investigations of osteoblast cultures rely solely on their intrinsic secretion machinery, in vivo osteoblasts are embedded in a framework of other cells and extracellular matrix which is laced with cytokines. We demonstrated a robust increase in bone mass upon JAK inhibition in a variety of preclinical models. To what extent our in vitro analysis of osteoclast and osteoblast monocultures is congruent with the systemic in vivo effects of JAK inhibitors remains to be determined. In vivo, osteoclasts could also be affected by JAK inhibition. Investigations have shown that osteoclasts are negatively affected by JAK inhibition indirectly via osteoblasts [45]. The group of Nakamura investigated osteoblast-osteoclast co-cultures and described that baricitinib reduced the expression of the receptor activator of nuclear factor-κB ligand (Rankl) in osteoblasts. With RANKL being one of the key drivers of osteoclast differentiation, osteoclastogenesis was impaired by baricitinib in osteoblast-osteoclast co-cultures [45]. Moreover, how osteocytes, an abundant cellular agonist of bone metabolism, can be affected with respect to JAK inhibition has not been well investigated (Figure 2). 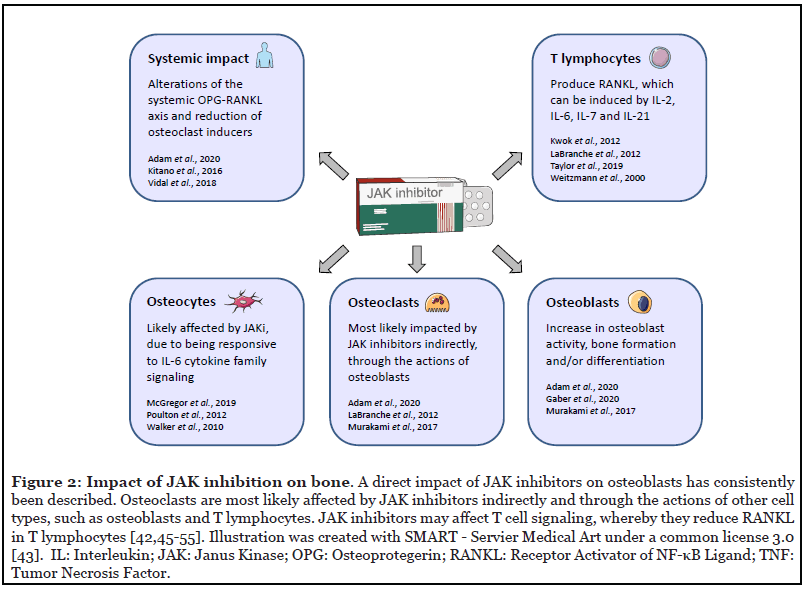 This entirety of this research project was enabled by research grants from Eli Lilly and Pfizer, the Deutsche Forschungsgemeinschaft (projects DFG-CRC1181- project A05, SCHE (1583/14-1), FOR 2886 PANDORA, HA 8163/1-1), the Bundesministerium für Bildung und Forschung (METARTHROS), the European Union (ERC StG 640087–SOS, ERC 4D NanoScope) and the EU/ EFPIA Innovative Medicines Initiative 2 Joint Undertaking RTCure grant 777357, and the Interdisciplinary Center for Clinical Research at the Universitätsklinikum Erlangen of the FAU.

Authors declare no conflicts of interest.