Copyright: © 2021 Javitt NB. This is an open-access article distributed under the terms of the Creative Commons Attribution License, which permits unrestricted use, distribution, and reproduction in any medium, provided the original author and source are credited.

Although it is recognized that more biomarkers are needed to evaluate the progression of liver disease and response to medications, plasma alkaline phosphatase and conjugated bilirubin are a focus of clinical trials and utilized by physicians in practice. Conjugated bilirubin is a surrogate marker for the status of bile acid transport and the lowering of plasma levels in response to administration of ursodeoxycholic acid indicates that a choleretic effect has occurred. Plasma alkaline phosphatase levels are affected by hepatic bile acid composition and flow and the status of the cholangioles. Medications that reduce endogenous bile acid pool size can augment the effect of ursodeoxycholic acid by expanding its proportion in those undergoing enterohepatic circulation. In addition, they can lower the elevated steady state concentration of hepatocellular bile acids and retard progression to cirrhosis.

How medications whose major biologic effect is to reduce bile acid synthesis favorably affect the course of a variety of cholestatic and metabolic liver diseases is not immediately apparent. Also, the most frequently used plasma biomarkers for evaluating benefit, alkaline phosphatase and conjugated bilirubin [1], provide different information. The former may be misleading with respect to the course of the disease and therefore it is important to focus on the pathophysiologic basis for its use.

Two mutations in bile acid transporters NTCP and BSEP, which render them non-functional, indicate the importance of the hepatocellular concentration of bile acids. The initial report of a mutation in NTCP was in a child with elevated plasma bile acids since birth, no liver disease and, perhaps surprisingly, no pruritus [2]. By contrast, mutations in BSEP (PFIC2) [3] always lead to cirrhosis early in life. Since NTCP regulates entry of bile acids into the hepatocyte and BSEP regulates their exit, it is reasonable to extrapolate from this knowledge that an increase in their hepatocellular concentration sets in motion a variety of processes leading to cirrhosis [4].

Further strong support for this view is the identification of families with non-functional mutations in FXR with severe cholestatic liver disease [5]. The characteristic plasma biomarkers are elevations in the concentration of conjugated bilirubin and bile acids but normal gammaglutamyl transferase levels, regarded as a more sensitive and precise surrogate for alkaline phosphatase.

A biomarker or technique that provides a precise knowledge of the hepatocellular concentration of bile acids would be the most useful test for managing patients with liver disease, but none exists. A technique utilizing [N- methyl-11C] cholylsarcosine (11S-CSar), a surrogate for endogenous bile acids, does permit visualization of the hepatocellular transport system and can be informative but requires PET scanning and currently is of relatively little clinical use [6]. Also, without knowledge of changes in total bile acid pool size, the information can be misleading [7].

Thus, the current state of the art for both physicians and regulatory agencies focuses mostly on changes in plasma alkaline phosphatase and/or gamma glutamyl transferase and conjugated bilirubin [1].

The beneficial effect of ursodeoxycholic acid in treating primary biliary cholangitis (PBC) was established by a prompt fall in the concentration of both plasma alkaline phosphatase and conjugated bilirubin [8]. By contrast, obeticholic acid, when used alone, only led to initially a significant reduction in plasma alkaline phosphatase [9]. Focusing on the differences in the changes in these plasma biomarkers provides insight into their biologic effects.

The normal level of plasma alkaline phosphatase derived from the liver represents a fraction of the protein that entered bile at the canalicular level and re-entered plasma via the sinusoidal blood and hepatic vein as the fluid flowed through the cholangioles. Thus, it is known that the protein is present in the canalicular membrane [10] but absent in cholangioles [11] and that acute bile duct obstruction in the rat leads to a progressive rise in plasma alkaline phosphatase concentration without a change in the concentration of the protein in thoracic duct lymph [12]. It is also known that in humans with an elevated plasma alkaline phosphatase concentration attributable to liver disease the level in thoracic duct lymph is unchanged from normal [13]. The fraction that is returned to plasma via the cholangioles reflects their integrity.

Although it is recognized that plasma alkaline phosphatase without further differentiation is a composite of proteins derived from different organs [14] and that plasma gamma glutamyl transferase, generally considered a more selective and sensitive surrogate for alkaline phosphatase, is also derived from heterogeneous sources [15], routine analyses do not make these differentiations and probably account for the variability sometime found in attempting to correlate these two parameters.

Obeticholic acid, in contrast to ursodeoxycholic acid, is a potent agonist of FXR [18], which downregulates the production of cholesterol 7 alpha hydroxylase, the rate-limiting enzyme in the major pathway of bile acid synthesis. Reducing endogenous pool size leads to reducing the amount of conjugated bile acid transported into the canalicular system during a 24 hr period and thus also to a reduction in alkaline phosphatase secretion. Lowering the synthesis of bile acids within the hepatocyte can lower their elevated intracellular levels, which could be further enhanced by up-regulating BSEP expression.

The choleretic effect of obeticholic acid described in bile duct-cannulated animals [19] when given in doses comparable to chenodeoxycholic acid from which it is derived, is not applicable to the much lower doses administered to humans.

Obeticholic acid when given in combination with ursodeoxycholic acid has the potential for enhancing the excretion of the conjugates of ursodeoxycholic acid by lowering endogenous bile acid pool size and thus expanding its proportion in the circulating pool of bile acids, which will generate a greater canalicular water flow.

The risks that occur in the prolonged administration of ursodeoxycholic acid are beyond the scope of this report. The recent report by Kotb [20] of the increased mortality in a large group of infants and children receiving ursodeoxycholic acid for liver disease compared with a control group should alert physicians to currently unaddressed problems with its prolonged use.

Fenofibric acid, the active drug produced in the intestines from the ester pro-drug fenofibrate [21] lowers the activity of cholestetrol 7 alpha hydroxylase, thus reducing the pool size of endogenous bile acids. Interest in its use for the treatment of PBC arose when fibrates were found to lower plasma alkaline phosphatase and gamma glutamyl transferase activity in individuals who did not have liver disease [22]. Because of its effect on endogenous bile acid pool size, it can enhance the therapeutic effect of ursodeoxycholic acid in the treatment of PBC [23].

Decreasing the bile acid pool size in treating cholestatic liver disease and metabolic liver disease, when there is evidence for reduced bile acid transport, has as its goal the lowering of the hepatocellular concentration of bile acids. It is reasonable to think that reducing bile acid pool size will lead to a reduction in the mean hepatocellular concentration of bile acids over a 24 hr period. However, considerable individual variation in response may occur depending on the status of NTCP and BSEP transporters. Also, a severe, unintended reduction in bile acid pool size can compromise hepatic bile formation leading to toxicity [24]. Thus, a method for specifically evaluating bile acid transport before and during therapy will provide more precise management of this aspect of the liver disease.

It is the differences in bile flow that occur with obetichoilic acid /or cilofexor and ursodeoxycholic acid that accounts for the lowering of conjugated bilirubin only with the latter. A linkage between the rate of excretion of organic anions and bile acid excretion and canalicular bile flow was demonstrated in the seminal studies of O’Maille [25-28]. Essentially, it was found that the capacity to excrete BSP (Bromsulphalein), which shares the same transport carriers as conjugated bilirubin, is increased by increasing bile acid-dependent canalicular flow but not enhanced by secretin administration, which increases flow from the cholangioles.

Figure 1 from O’Maille’s studies illustrates the effect of increasing bile acid-dependent canalicular bile flow on the biliary excretion of the organic anion, Bromsulphalein. Because on a molar basis the conjugates of ursodeoxycholic acid will increase canalicular bile flow to a greater extent than sodium taurocholate, an increase in conjugated bilirubin excretion and lowering of plasma levels will occur, good evidence for a beneficial effect of therapy. 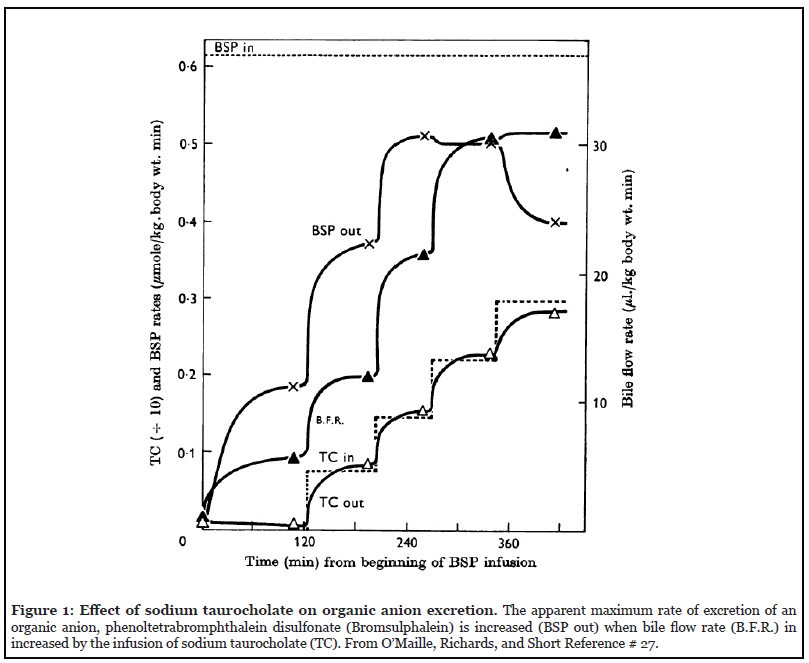 In using conjugated bilirubin as a surrogate marker of a choleretic effect, a limitation can be a change in renal function that can also affect the plasma level.

Norman B Javitt assembled the subject matter and wrote the entire manuscript.

I thank Suzanne M. Javitt for careful editing of the manuscript.