Mono- and Multi-nucleated Cardiomyocytes Do Not Constitute Transcriptionally Distinct Entities

Copyright: © 2021 Yekelchyk M, et al. This is an open-access article distributed under the terms of the Creative Commons Attribution License, which permits unrestricted use, distribution, and reproduction in any medium, provided the original author and source are credited.

The last years have witnessed an increased interest in the genetic, epigenetic and transcriptional heterogeneity of mammalian hearts under basal and disease conditions. Although it is known for a long time that the heart consists of several, functionally different cell populations, more detailed insights into the potential heterogeneity of individual cell populations, such as cardiomyocytes, endothelial cells or fibroblasts were hindered by the lack of appropriate techniques. The advent of modern single-cell techniques dramatically changed the situation, providing a relatively straightforward way to investigate differences among individual cells on a large scale. Unfortunately, the technical limitations of single-cell techniques have made it difficult to study cardiomyocytes due to their particular morphology and fragility, which prevent the use of standard Droplet-based single cell RNA-sequencing approaches [1]. Hence, most studies resorted to single nucleus RNAsequencing, which provides unprecedented novel insights but falls short to detect potential differences between cells with different numbers of nuclei. In addition, analysis of nuclear RNA might create a bias, ignoring effects of nuclear export, posttranscriptional regulation, etc.

For decades, the differences between cardiomyocytes with different number of nuclei were unknown, giving rise to several speculations. It was assumed that the existence of mono- and multi-nucleated cells might be a mere byproduct of terminal differentiation, while others suggested that mono-nuclear but not multi-nuclear cardiomyocytes contribute to heart regeneration [2]. The postnatal cardiomyocytes’ nuclearity and nuclei ploidy varies among mammals, ranging from 96% cardiomyocytes with two nuclei (30-60% of mononucleated cells being tetraploid) in mice to 90% with one nucleus and 60% being tetraploid in humans [3]. We recently investigated potential differences between murine cardiomyocytes of various nuclearity [4]. Unexpectedly, we found that mono-, bi-, and multi-nucleated cells were remarkably similar at the transcriptional level, even after induction of cardiac hypertrophy, although induction of hypertrophy led to profound changes in the expression profiles of individual cardiomyocytes. Transcriptional heterogeneity in hypertrophic hearts was primarily driven by hypoxic responses and was associated with expression of the transcription factor and hypoxia marker HIF1α. Since expression of HIF1α was inversely correlated with vascularization of myocardium, we assume that suboptimal and/or delayed vessel growth during heart remodeling is the main origin of the observed transcriptional heterogeneity.

The finding that rod-shaped cardiomyocytes are strikingly homogeneous is surprising, given the difference in nuclearity. Most cardiomyocytes in the mouse heart undergo karyokinesis but not cytokinesis after birth, which results in the formation of multinucleated cells. Subsequent endoduplication will further increase polyploidy of cardiomyocytes [5,6]. The appearance of more than one nucleus in cardiomyocytes heralds a switch from hyperplasic to hypertrophic growth [3,7,8]. Notably, cardiac interstitial cells also show a varying degree of nuclearity and ploidy [9]. Putative advantages of polyploidization and multi-nucleation are increased resistance to apoptosis, as well as protection of the genome against mutations [10]. Polyploidization might also support higher metabolic activity, enhance gene expression and higher efficiency of stress responses, allowing organ growth without altering cell shape and function. In support of this notion, it was reported that environmental stress (such as hypertrophy or injury) during postnatal development leads to increased multinucleation and polyploidization. [11]. Some authors even speculated that polyploidization and/or multi-nucleation might be beneficial in terms of heart regeneration due to a hypothetical ability of such cells to divide and potentially superior contraction of larger cardiomyocytes [12,13]. On the other hand, Gonzalez-Rosa et al. demonstrated that induction of polyploidization in zebrafish cardiomyocytes by overexpression of cytokinesis regulator Ect2 eliminates the ability of heart regeneration [14].

In adult murine heart, however, transcriptional differences between individual cardiomyocytes seem to depend on the local microenvironment rather than on endogenous factors (such as the nuclearity or the nuclear ploidy), which is also supported by a recent report from Litvi?uková et al. [18]. In this impressive study, hearts from adult humans were subjected to single-cell and singlenucleus RNA sequencing analysis, allowing separation of ventricular cardiomyocytes into five interconnected clusters that showed considerable transcriptional overlap. Importantly, the moderate differences between these clusters were primarily attributed to spatial factors (such as association with left or right ventricles, or atrium) but not to the frequency of mono- or multinucleated cardiomyocytes. A similar transcriptional homogeneity of adult cardiomyocytes was observed in recent mouse singlecell and single-nucleus studies by Gladka et al. [19], the Tabula Muris Consortium [20] and Vidal and Wagner et al. [21]. Of course, in case of single-nucleus RNA-seq, the information about the nuclearity of original cells is lost. Moreover, the nuclear transcriptome represents a snapshot of currently transcribed genes, which contains un-spliced and immature transcripts, making a direct comparison to the single-cell transcriptome difficult. Nevertheless, it seems unlikely that potential heterogeneity of monoversus multi-nucleated cardiomyocytes would have gone unnoticed in single-nucleus datasets: if multi-nucleated cardiomyocytes would have been transcriptionally divergent from mono-nucleated, their nuclei would have clustered separately (assuming low intrinsic variation among nuclei, which belong to the same cell).

Although none of the mentioned studies specifically focused on polyploidization or multi-nucleation, the fact that different clusters of cardiomyocytes did not recapitulate the frequencies of mono-, bi-, or multi-nucleated cells, argues against an important role of cardiomyocyte nuclearity in determining the transcriptional landscape.

Notwithstanding, it is absolutely possible that rod-shaped cardiomyocytes of different nuclearity differ by other means. For example, they might show different chromatin organization or display heterogeneity at the proteome level, which might be caused by differential protein turnover and/ or protein processing [22]. At present, the contribution of lowly expressed genes to transcriptional heterogeneity among rod-shaped cardiomyocytes is difficult to access, since lowly expressed genes are not detected by current scRNA-seq approaches due to sensitivity limits [23]. We think that is fair to state that mono- and multi-nucleated cardiomyocytes show remarkably similar profiles, at least with respect to abundant gene transcripts, and respond in a similar manner to disease conditions, such as pressure overload. 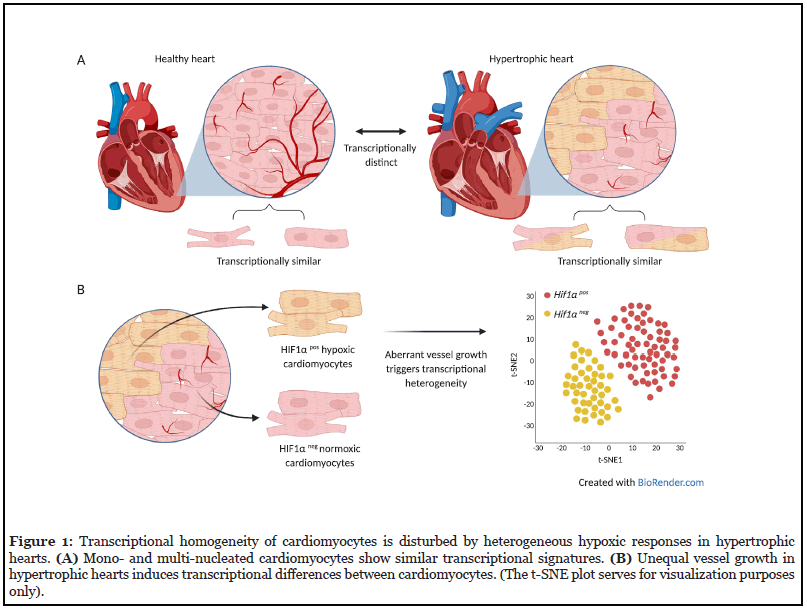