Copyright: © 2022 Moll I, et al. This is an open-access article distributed under the terms of the Creative Commons Attribution License, which permits unrestricted use, distribution, and reproduction in any medium, provided the original author and source are credited.

Bacterial trans-translation is generally known as a quality control process that rescues stalled translation complexes at the 3’-terminus of non-stop mRNAs. Our results indicate that trans-translation has a similar role in EDF generation from zwf mRNA. However, our data reveal that the trans-translation system may also provide a regulatory mechanism to attenuate EDF generation in the single cells. Thereby, the required threshold of EDF molecules is only achieved by the entire bacterial population, as expected for a genuine QS process.

Bacteria communicate via quorum sensing (QS) signaling molecules [1-8]. QS allows bacteria to monitor and quantify the number of their kin present in their environment. By this means, they ensure the modulation of gene expression with respect to population density. Thereby, bacterial populations can behave like a multicellular organism [1-8]. Over the last years, a great deal of attention has also been focused on the abundance of toxin-antitoxin (TA) gene modules located in chromosomes of most bacteria (reviewed in [9,10]. E. coli mazEF is the first discovered chromosomal TA module [11]. The sequence-specific endoribonuclease toxin MazF preferentially cleaves single-stranded mRNAs at the 3’ or at the 5’ side of the first A in the ACA sequences [12,13]. When E. coli encounters stressful conditions the antitoxin MazE is proteolytically degraded thereby triggering MazF activity [14]. Under such conditions, the active MazF causes the generation of leaderless mRNAs by the removal of the 5’-UTR of some specific mRNAs by cleavage upstream of AUG start codons [15]. In addition, MazF cleaves the 16S rRNA at the decoding center of the ribosome resulting in its 3’-terminal truncations at position 1500 [15]. The removed 43 nucleotides comprise the anti- Shine-Dalgarno (aSD) region, which is essential for translation initiation on canonical mRNAs but is dispensable for the recognition of AUG start codons located close to the mRNA 5’-terminus. Thus, the aSD-deficient ribosomes exclusively translate leaderless mRNAs [15]. Taken together, the concerted action of MazF on ribosomes and mRNA transcripts engenders a stress-induced translation machinery (STM) [15,16], which allows the specific synthesis of a pool of proteins that affects cell viability within the bacterial population [17,18]. Moreover, the post-transcriptional autoregulatory circuit of mazF results in cell-to-cell translation and growth heterogeneity in isogenic populations [19,20].

We have also uncovered the first QS peptide in E. coli namely the pentapeptide NNWNN, termed extracellular death factor (EDF). As anticipated for a QS molecule, the pentapeptide is taken up by the cells after the concentration of EDF reaches a threshold level in the medium. In the cytoplasm, it binds to the MazE-binding pocket on MazF, thereby stimulating the activation of MazF. In this respect, EDF acts as signaling molecule linking the mazEF-mediated stress response to the population density in E. coli [21,22]. Our experiments further revealed that when E. coli encounters stressful conditions, activation of MazF results in the generation of the QS EDF factor employing the product of the zwf gene [21,22], which encodes the 491–amino acids long enzyme glucose-6- phosphate dehydrogenase involved in the central carbon metabolism [23].

More recently, we studied the MazF-dependent mechanisms underlying the generation of the pentapeptide EDF from the zwf gene [24]. We uncovered several distinct molecular steps that are surprisingly involved under stress in the generation of EDF. In particular, we showed that under stress the endoribonuclease MazF cleaves the zwf mRNA at specific positions (Figure 1). Thereby, a leaderless zwf mRNA variant is engendered that is truncated 30 codons after the EDFencoding region, a length corresponding to the ribosome nascent peptide exit tunnel. As the absence of a stop codon at the 3’-terminus of the truncated zwf* mRNA results in stalling of translating ribosomes, the trans-translation machinery is recruited to release the truncated Zwf protein (Zwf*) equipped with the C-terminal degradation tag encoded by the tmRNA. Consequently, the protease ClpPX is likewise involved in and essential for the maturation of the EDF pentapeptide (Figure 1). 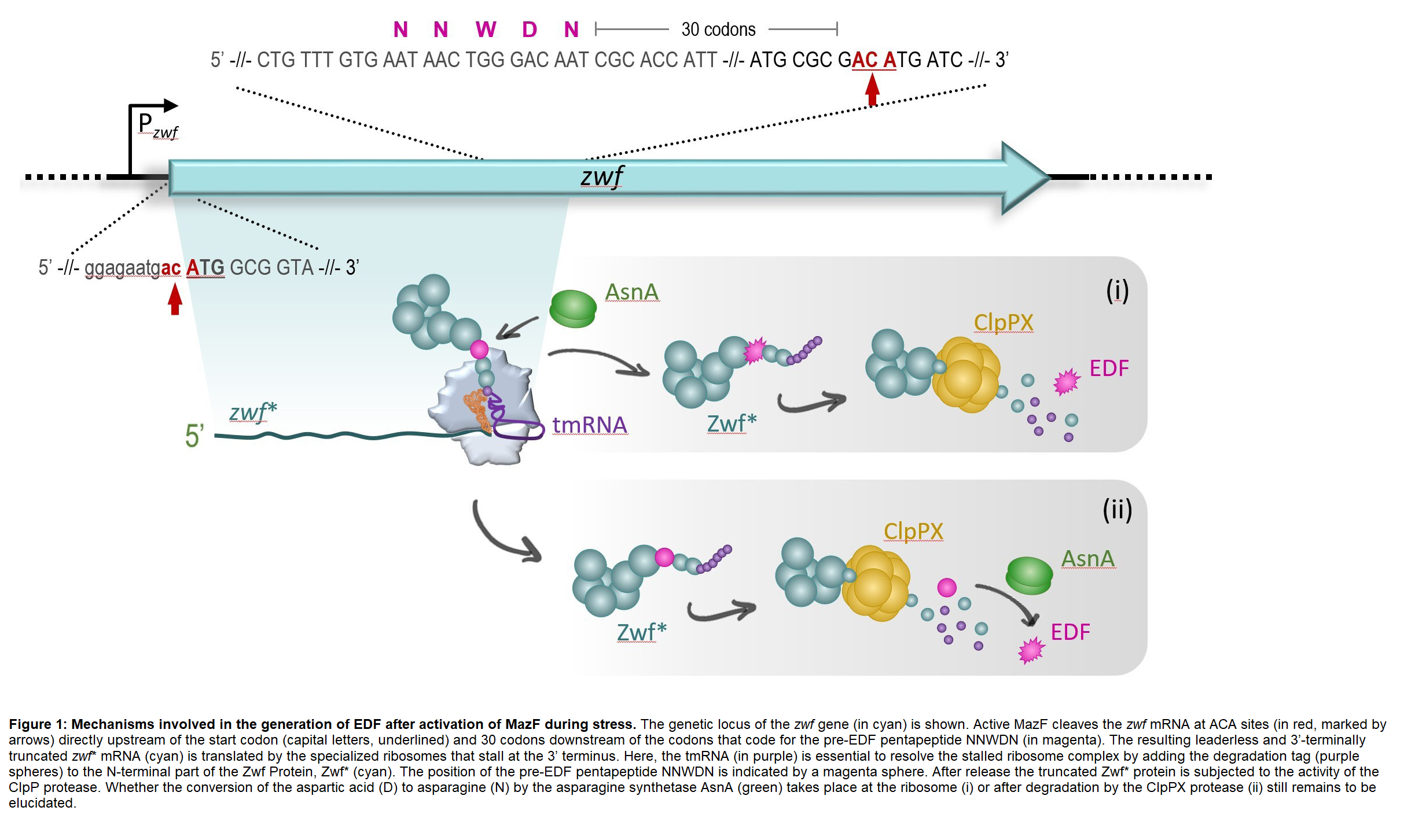 In general, bacterial trans-translation represents a quality control process that recognizes and rescues stalled ribosome complexes at the 3’-terminus of so-called non-stop mRNAs [25-27]. Taken together, our results indicate that transtranslation is essential for the formation of EDF employing the zwf gene (Figure 1). Intriguingly, based on our observations we hypothesize that for EDF synthesis the trans-translation system might further provide a negative feedback loop regulating EDF formation (Figure 2). As numerous mRNA molecules are truncated by active MazF, a plethora of stalled ribosome complexes are formed that recruit the majority of trans-translation components. Thus, only very few of those components are available for the generation of EDF. Collectively, our results support the notion that this process results in the attenuation of EDF generation in the single cell (Figure 2). Thereby, the required threshold of EDF molecules is only achieved by the entire bacterial population, as expected for a genuine quorum sensing (QS) process. 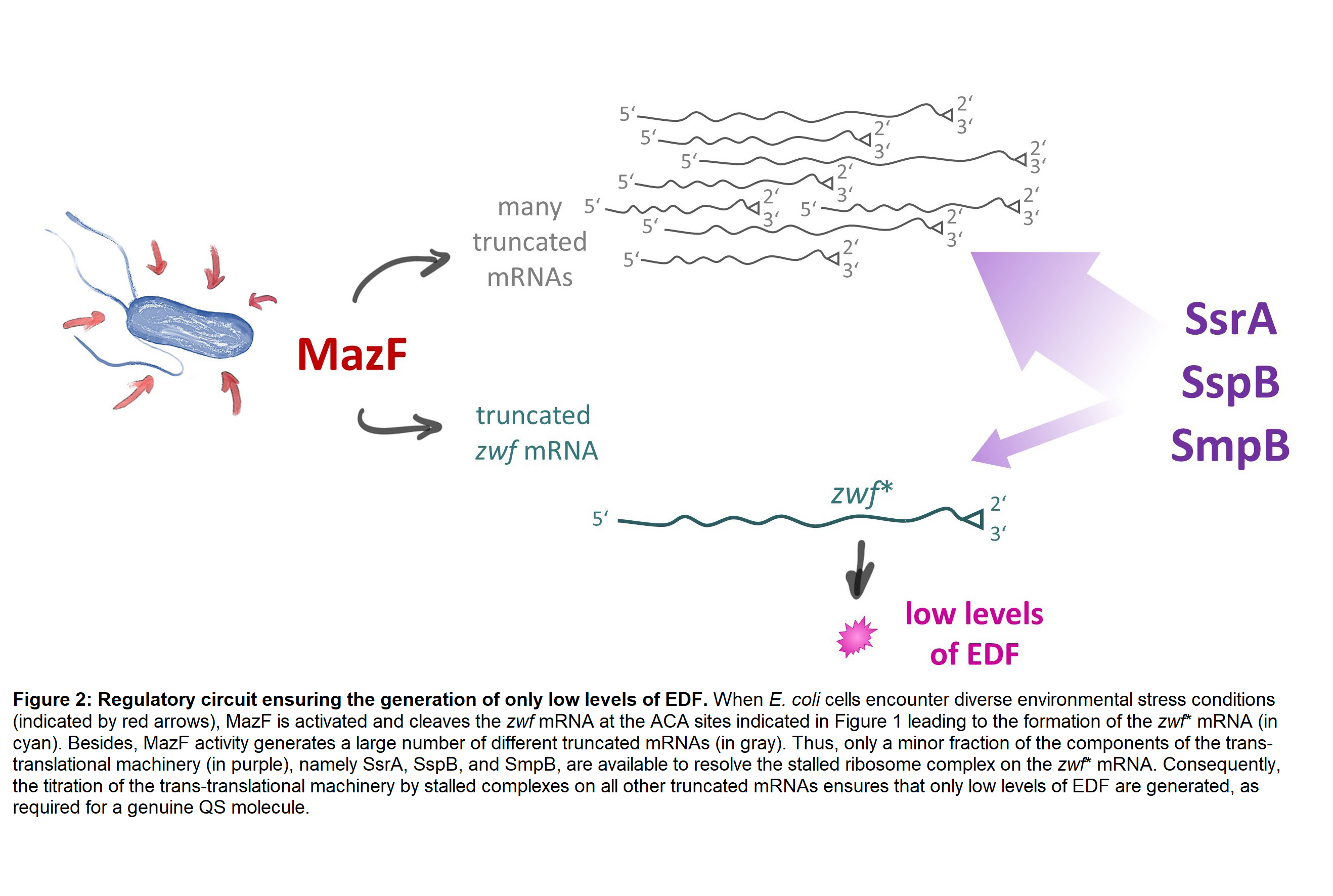