Copyright: © 2020 Santillán JMJ, et al. This is an open-access article distributed under the terms of the Creative Commons Attribution License, which permits unrestricted use, distribution, and reproduction in any medium, provided the original author and source are credited.

We have implemented ultrafast laser ablation synthesis in liquids together with mechanical centrifugation to obtain ligand-free silver nanoclusters (Ag NCs). Given the nature of this technique, the NCs colloids produced are highly pure which avoids additional cleaning protocols. The mechanical centrifugation of the colloids helps to separate the NCs from their larger counterparts (nanoparticles (NPs)), present in the suspension. Synthesized NC colloids are studied by fluorescence spectroscopy observing UV bands corresponding with HOMO-LUMO cluster transitions, and HRTEM measurements where Ag NCs clouds and Ag atomic clusters are observed. Finally, the photocatalytic response of the Ag NCs was studied by the degradation of the standard molecule Methylene Blue (MB) in interaction with white light. It was observed that when MB and Ag NCs are mixed in the solution, degradation of MB is much faster, indicating the strong photocatalytic response of NCs, even at low concentrations.

Reducing the size of a metal from macroscopic to the nanoscale generates a scaling behavior in physical and chemical properties due to the large surface-to-volume fraction. While a further size reduction to small clusters under 2 nm (<~100 atoms) yield geometric and electronic structures which are still different from their nanoparticle (NP) counterpart [1]. These small clusters adopt special atomic arrangements to reduce their surface energy, and their electronic structures are no longer continuous, as in bulk metals, but rather discretized. Owing to these peculiar characteristics, metal clusters exhibit striking properties and characteristics which are dependent on the number of atoms present in them. For these reasons, small metal clusters have attracted much attention as new functional nanomaterials, which make them promising candidates for various applications in a wide range in the science and technology. Therefore, when working with these small metal clusters, the synthesis plays a very important role allowing expanding the range of applications. In the last years, numerous studies on chemical synthesis of these clusters have been reported [2-11]. Nevertheless, several of these methods that tend to yield highly monodisperse clusters suspensions, are mixed with unwanted chemical precursors, resulting in aggregation, background noise in analytical chemistry, toxicity, and deactivation of the catalyst. Thus, the interest in finding new routes of green synthesis to boost the catalytic and biomedical properties of small metal clusters has become an active branch of nanotechnology. For this purpose, ultrafast pulses laser ablation in liquids [12-16] is an alternative technique for synthesize metal NPs free of unwanted by-products.

In this work, we employed the physical method of ultrafast laser ablation of silver target in water, together with mechanical centrifugation to obtain ligand-free few-atoms silver nanoclusters (Ag NCs). Luminescence spectral behavior of the obtained colloids was observed by fluorescence spectroscopy and was analyzed using the Jellium model to characterize the HOMO-LUMO energy band gap of few atoms NCs. Also, HRTEM measurements were made confirming the presence of Ag NCs and small NPs. Finally, photocatalytic efficiency of the NCs was analyzed through degradation of Methylene Blue (MB) together with highly centrifuged colloid, showing an enhanced photocatalytic activity compared with pure MB. The results presented here are complementary to those recently published [17].

Mechanical centrifugation was implemented to achieve the separation of the small NCs from the NPs of larger sizes present in the obtained colloids. Fluorescence response of the as- prepared colloids and supernatant of the centrifuged colloids was obtained using a Shimadzu RF- 5301PC spectrofluorophotometer in the range 200 nm to 700 nm, to different centrifugation conditions that were carefully monitored controlling time and speed. The excitation wavelength employed was 220 nm.

The photocatalytic activity of the Ag NCs was performed by monitoring the degradation of a mixture of MB with the supernatant of the centrifuged colloids for 1000 min at 15000 rpm as compared to a pure MB solution (0.04 mM), when they were illuminated with a white light lamp. The degradation was measured through the absorption spectra obtained using a Shimadzu UV-1650PC spectrophotometer in the wavelength range of 300 nm to 900 nm, taken at fixed time intervals.

Given the bottom-up nature of femtosecond laser ablation synthesis, colloids obtained from a Ag target in liquids by this technique present, in general, NPs between 2 and 20 nm together with structures of a few and a few tens of atoms. The latter present radiative transitions (fluorescence) and not a plasmonic resonance band like the larger NPs. For this reason, UV- visible fluorescence spectroscopy measurements using an excitation beam of 220 nm were carried out. To obtain luminescence information as a function of the excitation energy, the recorded fluorescence spectra are normalized to the absorbance of the sample in λ= 220 nm. Figure 1a exhibits a typical fluorescence spectrum of a colloid synthesized by 600 μJ pulse energy fs laser ablation. Three peaks around 284 nm, 330 nm and 358 nm, besides a notorious broad fluorescence band from 400 nm to 625 nm are observed. The peak at 220 nm corresponds to the scattering of the excitation light. This spectral behavior of the luminescence of metallic nanostructures is due to further confinement to smaller sizes than Fermi wavelength of an electron (0.7 nm approximately) which should result in discrete, quantumconfined electronic transitions [18]. This phenomenon has been studied in the light of the Jellium model, in which the electronic dynamics of metallic structures of few atoms are analyzed, considering the electrons as a free gas with negative charge moving in a weakly attractive mean field created by positively charged ionic cores with symmetric spherical 3D harmonic potential. The Jellium model predicts that, for this type of structure, the HOMO-LUMO transitions energy depends on the Fermi energy and the number of atoms, Eg = EF. N−x, where for

, the equation Eg = EF.N-1/3 describes the experimental results of electronic transitions such as those observed in Figure 1a. While the case of

is related to the transitions of semiconductor quantum dots [22].

From the aforementioned equation, the number of atoms of the NCs in solution can be determined, measuring the bandgap energy Eg from the peak wavelength of the experimental fluorescence UV-visible spectrum, considering EF = 5.49 eV [23]. Figure 1b shows in full line the Eg dependence on N, while triangles indicate Eg of the clusters present in the colloid. It can be seen that they lay on the line that represents the general decreasing dependence on cluster atoms number.

Clusters with 2, 3 and 4 atoms (Ag2, Ag3 and Ag4) correspond to the first three recorded distinct peaks in Figure 1a, while peaks corresponding to Ag7, Ag8, Ag9, Ag10 and Ag11 form the rising side and maximum of the wide experimental band. Besides, Ag12 to Ag20 bands that are overlapped, forming the falling side of the wide band in Figure 1a. The Eg values of these latter bands are indicated by circles in Figure 1b. From a side-view, a 30 s exposure image (inset) shows the blue-reddish fluorescence corresponding to the wide fluorescence band centered around 480 nm, which can be seen even with the naked eye.

Table 1 summarizes peak wavelength (λ), Eg and N for the different clusters found in the obtained colloidal suspensions. It is worth noticing that, according to the relation between band gap energy and atoms number, the spectrofluorophotometer wavelength range would allow us to see fluorescence of Ag NCs of up to N = 30 atoms (Ag30). However, in our case, using fs laser ablation we observed clusters only up to 20 atoms, as can be observed in Figures 1a and 1b and Table 1.

To confirm the presence of the NCs in the obtained colloids, HRTEM images were acquired employing HAADF-STEM mode to acquire better quality images (see [17] for more clear evidence of clusters formation). Figure 2 presents NCs and NPs in several nucleation stages. In both panels of Figure 2 Ag NPs can be observed in a range of approximately 1.7 nm to 3.1 nm in size, some of them with noticeable crystalline structures (pointed with arrows). In addition, there are present some “clouds” of NCs (solid yellow circles) and few atoms Ag NCs (dashed blue circles) coexisting with the small NPs. These HRTEM images are in agreement with the results obtained by fluorescence spectroscopy of the as-prepared colloid (Figure 1) and the absorbance spectra behavior that will be shown later in Figure 4. 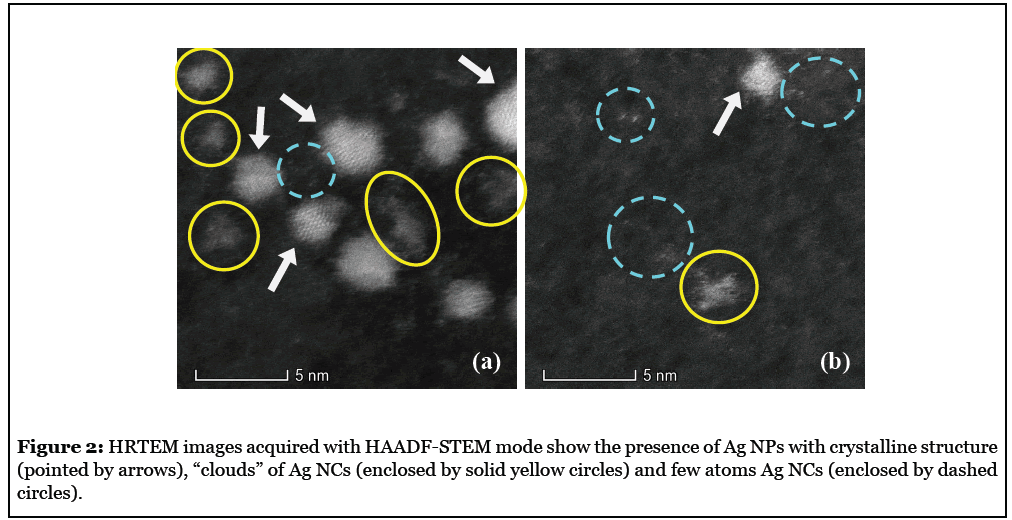 After carefully trying different centrifugation speeds and times, it was found that upon reaching centrifugation with 15000 rpm, the intensity of the fluorescence bands at 284 nm and 330 nm increases significantly with respect to the 360 nm band, which means that the smaller NCs (Ag2 and Ag3) remain mainly in the supernatant.

Figure 3 presents the fluorescence spectra of the colloid centrifuged with 15000 rpm during different times. Inset shows an enlargement of the as-prepared and 20 min centrifuged colloids are shown together with water spectrum to comparison.

It can be observed the fluorescence bands corresponding to Ag2, Ag3 and Ag4 NCs progressively increase as centrifugation time increases, with a noticeable predominance of Ag2 and Ag3 overlapped bands. This fact is due to the gradual decreasing of Ag NPs presence in the colloid that quench the luminescence produced by the NCs. The above is explained because the Ag NPs plasmonic absorbance is close to the HOMO-LUMO NCs emission.

Regarding the photocatalysis studies of Ag NCs, different authors have dedicated themselves to this task, carrying out proofs-of-concept with very good results in the degradation of acridine red [24], formic acid [25], among others. However, not enough studies have been developed in Ag NCs with absence of capping such as those obtained by femtosecond laser ablation. To analyze the photocatalytic response of the Ag NCs, a control of the degradation of a MB solution (0.04 mM) in a mixture with a colloid after synthesized and centrifuged for 1000 min at 15000 rpm, was carried out. This control was performed monitoring periodically the absorption spectra by means of UV-visible spectrophotometer. Panel (a) of Figure 4 presents the absorption spectra of the pure MB solution for different times while illuminated with a white lamp. In these spectra it is possible to observe the decrease in the intensity of the absorption as time passes, indicating the native degradation of the dye molecule due to the effect of white light. 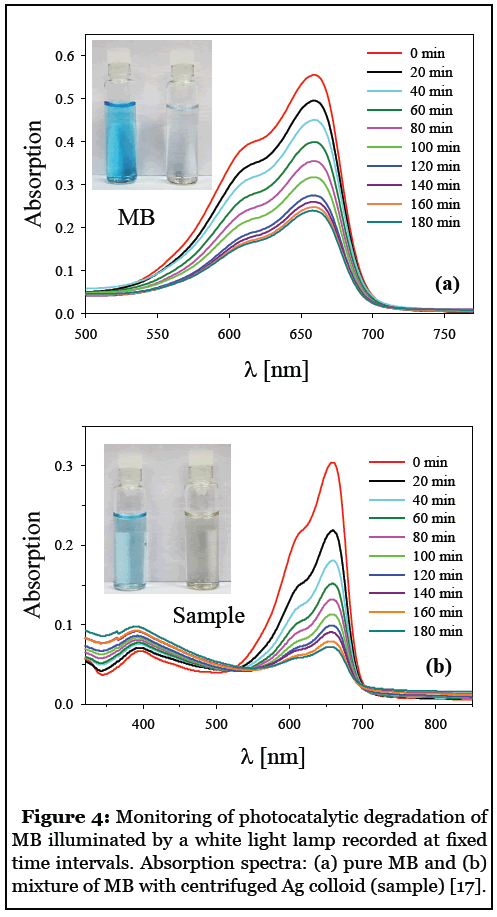 In contrast, panel (b) exhibits the photocatalytic degradation of the MB solution when it is mixed with the centrifuged Ag colloid to 1000 min (containing a lesser amount NPs and the larger sized NCs), under the action of the same white light lamp. It is seen that the absorbance peak decreases progressively faster than for the case of pure MB solution, also characteristic silver plasmon absorbance is present indicating the presence of small Ag NPs. Inspection of the time evolution of the absorbance band at 660 nm in Figure 4 suggests that dye photobleaching gets stronger from pure MB to sample. The insets in Figure 4 show a picture where the discoloration after photocatalytic degradation in both samples is observed.

The photocatalytic degradation of MB and the sample (mixture of MB and centrifuged Ag colloid) was quantitative determined by the expression:

Figure 5 shows the calculated values of the photocatalytic degradation (in %) for the pure MB solution and sample (MB + NCs). 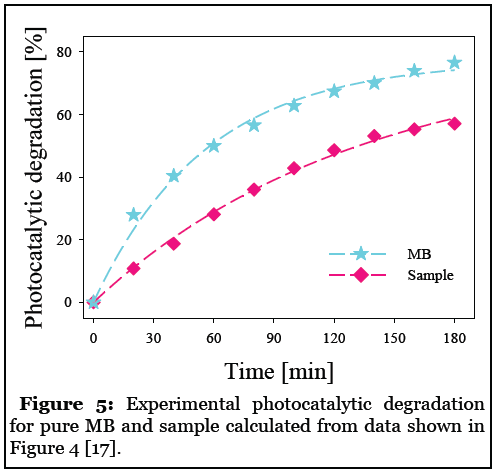 As observed in Figure 5, the photocatalytic degradation of the pure MB reaches to 57% after 3 h of illumination, while the sample reaches 79%. Despite of their low concentration in the sample, the Ag NCs synthetized present an evident photocatalytic action, making it a possible photocatalyst agents in different applications.