Copyright: © 2021 Liu L, et al. This is an open-access article distributed under the terms of the Creative Commons Attribution License, which permits unrestricted use, distribution, and reproduction in any medium, provided the original author and source are credited.

The coronary slow flow phenomenon (CSFP) is relatively common in patients scheduled for coronary angiography, characterized by delayed distal vessel opacification of contrast in the absence of significant epicardial coronary stenosis. Rather than a simple angiographic curiosity, CSFP has significant clinical implications. Currently, its pathophysiological mechanism remains unclear although several possible mechanisms have been proposed. There is objective evidence of left ventricular systolic/diastolic dysfunction in patients with CSFP, however the alteration of left atrium (LA) function is controversial. LA serves an integral role in cardiac performance and is closely related to left ventricle function. In this review we will address the changes of LA structure and function in patients with CSFP according to our research and existing literature, therefore provide further insight into its clinical significance and pathophysiological mechanisms.

Coronary slow flow phenomenon (CSFP) is not an infrequent angiographic finding in patients scheduled for coronary angiography. The incidence varies from 1% to 5.5% [1-3], although some cardiologists believe it is often underrecognized, its incidence could be as high as 34% [4]. The CSFP was firstly described by Tambe in 1972 in 6 subjects presenting with chest pain syndromes [5], and now it attracted intensive attention among interventional cardiologists since its original description. The current adapted diagnostic criteria was proposed by John Beltrame in 2012 [6] where CSFP is defined as delayed distal vessel opacification of contrast in the absence of significant epicardial coronary stenosis (coronary artery stenosis ≤40%), with the Thrombolysis in Myocardial Infarction (TIMI) blood flow grade of 2 or corrected TIMI frame count (cTFC) of greater than 27 frames in one or more epicardial vessel. Currently, it’s believed that CSFP is not just a simple angiographic curiosity, it has significant implications in clinical setting. Its pathophysiological mechanism remains unclear, although several possible mechanisms were proposed. In this article, we will summarize the clinical implications, possible mechanisms, and the alteration of cardiac function, especially the changes of left atrial functions in patients with CSFP according to our research and existing literature. Our purpose is to provide further insight into its clinical significance and pathophysiological mechanisms.

The clinical manifestations of patients with CSFP are diverse, but more than 80% of patients can have repeated chest pain episodes that could last for an extended period of time and could also occur at rest [7-9]. The clinical symptoms range from severe, such as acute coronary syndrome, to mild, such as chest tightness, and sometimes CSF can even cause fatal ventricular arrhythmias [9,10] and sudden cardiac death [11]. Studies have shown that younger patients are more likely to develop CSFP, and the prevalence is higher in men than women [2,3]. CSFP is more likely seen in smokers [10], patients with metabolic syndrome and high body mass index (BMI) [12], patients with anxiety, depression [13] and sleep apnea [14], patients with high uric acid level [15] and in patients with impaired renal function [16]. In a study by Sanati et al., hypertension, low high density lipoprotein cholesterol-c (HDL-c) level and high hemoglobin level were also considered as independent predictors of this phenomenon [17].

Unlike the relatively clear definition, the pathophysiology of CSFP is not fully understood. Several possible mechanisms have been proposed, such as the endothelial dysfunction theory [18], early atherosclerosis [19], microvascular disease [20,21], platelet dysfunction [22], changes in hemorheology [23,24], the ratio of monocyteto- HDL cholesterol [25], and oxidative stress and local/ systemic inflammatory response [20,26]. Recently, some studies have indicated that lipoprotein-associated phospholipase A2 [27], plasma choline [28], or serum salusin beta level [29] could be a predictive or diagnostic biomarker for CSFP.

In our recent study [30], we found that the percentage of monocytes has significant difference between the CSF group and the normal control group, it was an independent risk factor for the occurrence of CSFP by regression analysis, indicating monocytes may play an important role in the development of CSFP. As we know, monocytes involve in the occurrence and development of atherosclerosis, which precipitates the progression of atherosclerotic plaques from a stable state to an unstable state [31,32]. Coronary intravascular ultrasounds have revealed intimal thickening, diffuse vascular wall calcification, and atheromatous plaque formation in the epicardial coronary arteries of CSF patients [19,33], indicating that CSFP may be an early manifestation of coronary atherosclerosis or part of systemic atherosclerosis. In addition, we also noticed a higher prevalence of smoking and a higher BMI in the CSF group than that of the control group, which can be linked with some recent findings. Several studies have shown that smoking can induce endothelial dysfunction through oxidative stress [34], which is involved in the development of CSFP. Metabolic syndrome (such as obesity, high BMI, diabetes, etc.) has similar effects on vascular endothelium. Obesity and a high BMI can cause endothelial dysfunction through an imbalance in the production of vasodilatory agents, thus inducing CSFP [12,35].

Taken together, CSFP may be caused by gradual progression of endothelial dysfunction, microvascular disease, early atherosclerosis, then resultant microvascular luminal narrowing. The interplay between local and systemic inflammatory response promotes the process.

There is objective evidence of left ventricular systolic/ diastolic dysfunction in patients with CSFP [36,37]. However, the effect of CSFP on left atrial function has been minimally investigated. A few studies can be found in the existing literature, but the conclusion is controversial [38,39]. Left atrium plays an important role in ensuring proper performance of left ventricular function and the systemic circulation. It is not just simply a conduit for left ventricular (LV) filling. From hemodynamic perspective left atrium is divided into three phases, LA reservoir, conduit, and pump function, all of which contribute to LV filling [40-42]. Conversely, LV function influences LA function. LA reservoir function is affected by LV contraction and LA compliance. LA pump function is influenced by LV end-diastolic pressure, LV compliance, and LA contractile properties, while LA conduit function is dependent on LV diastolic properties [42,43]. Abnormal left atrial function can affect left ventricular filling and cause a decrease in cardiac output.

Accurate evaluation of the structure and function of the left atrium has important significance in clinic settings. Traditional methods using two-dimensional (2D) echocardiography and Doppler technique for assessment of left atrial function gives limited information depending on hemodynamic loading and geometric measurements [41] and may not fully reflect the left atrial function. 2D Speckle tracking echocardiography (2D-STE) is a relatively new echocardiographic technique developed for quantitative evaluation of cardiac function. This technology quantifies the movement of the myocardium by tracking the trajectory of the myocardial acoustic spot during the cardiac cycle (Figure 1). It gives an excellent assessment of the atrial deformation profile during an entire cardiac cycle by closely following the LA physiology [43,44]. In contrast to Doppler derived parameters, speckle tracking has the advantages of being angle-independent, less loaddependent than ejection fraction, and less affected by reverberations, side lobes, and drop out artifacts [44,45]. 2D-STE was found to be a feasible, reproducible, and sensitive method to assess LA function [46]. Several studies have shown that strain imaging can detect LA dysfunction before the manifestation of LA structural changes [44-48]. 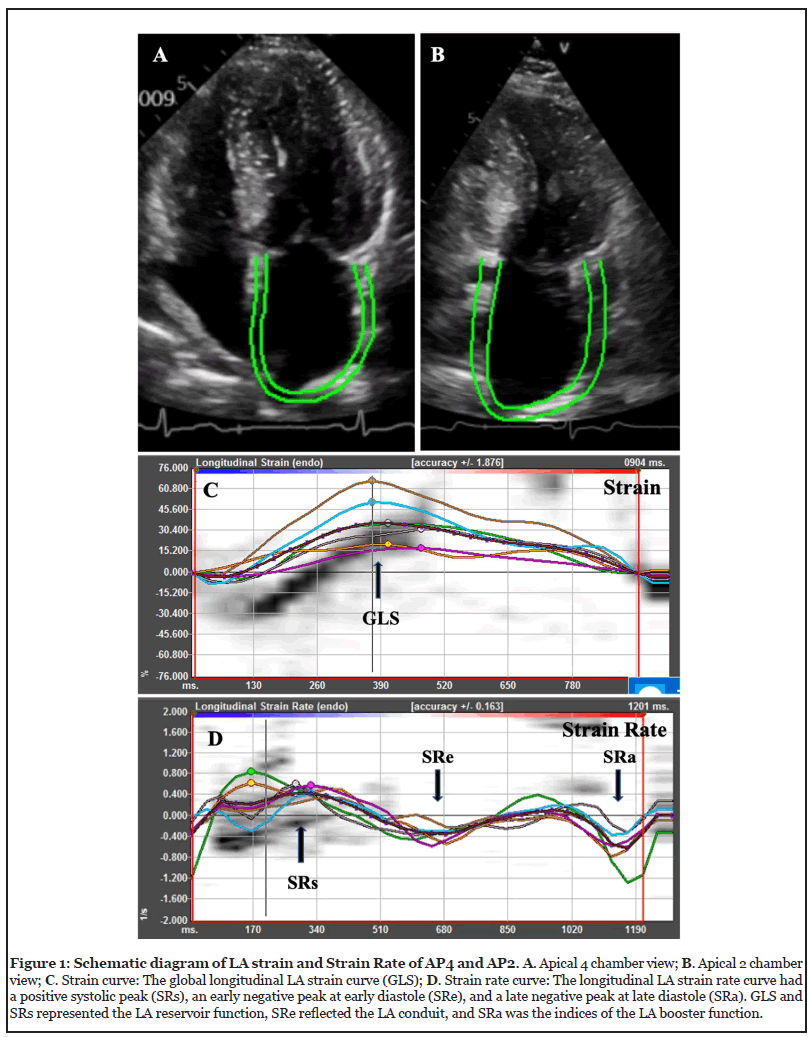 The effect of CSFP on LA functions remains controversial [37,47,48]. Wang et al. [48] evaluated the LA function in 82 patients with CSFP and compared with normal control participants. They observed decreased LA conduit function and increased LA pump function in patients with CSFP, but no significant differences regarding LA phasic emptying volume and emptying fraction were observed between the two groups. However, in another study with 1:1 patient-control matching design for age, sex, hypertension, diabetes mellitus, and the LV function by Fallah [38], the authors did not find significant differences regarding triphasic LA functions assessed through 2D-STE between the CSFP group and control group. In our study [30], we found that minimum left atrial volume index (LAVImin) increased and left atrial ejection fraction (LA-EF) decreased in the CSFP group compared with the control group, although no statistically significant differences were found in the LA size (i.e., antero-posterior diameter, lateral diameter, and LA length) and maximum left atrium volume index (LAVIm) between the two groups. Meanwhile, we found that patients with CSF have lower LA-mLGS and higher late diastolic strain rate (LA-mSRa), suggesting an impairment of left atrial reservoir function and booster function in patients with CSFP. The correlation test revealed a negative correlation between LA-mGLS and mTFC, suggesting that the overall LA function will further decrease with a decrease in coronary blood flow velocity.

CSFP is a multifactorial entity in which endothelial dysfunction and local/systemic inflammatory status may play key roles. Patients with CSFP have variably clinical manifestations and impaired cardiac functions, including LV systolic/diastolic and LA function.