The Impact of Dido on the Epithelial-Mesenchymal Transition

Citation: Fütterer A, Talavera-Gutiérrez A, Martínez-A C. The Impact of Dido on the Epithelial-Mesenchymal Transition. Arch Cancer Biol Ther. 2021; 2(2): 43-49.

Copyright: © 2021 Fütterer A, et al. This is an open-access article distributed under the terms of the Creative Commons Attribution License, which permits unrestricted use, distribution, and reproduction in any medium, provided the original author and source are credited.

Epithelial-Mesenchymal Transition (EMT) and its reverse process, Mesenchymal-to-Epithelial Transition (MET) are well-studied processes involved in cell differentiation during development and organ formation, as well as in its reverse process in somatic cell reprogramming. In addition, involvement of a deregulated form of the EMT in tumor progression has long been known. Understanding the molecular and cellular mechanisms for cancer development, progression, and metastasis is a fundamental challenge toward advancing and improving therapeutic strategies. In this mini-review, by considering the distinct phenotypes of available Dido mutations in mice, for the first time we connect Dido gene function and participation with EMT and MET in the areas of cell differentiation, reprogramming, and cancer development.

The Physiological Occurrence of EMT and MET

The human body is constituted by more than 200 committed cell types [1], all of which derive from the zygote, a single totipotent cell that divides and differentiates into all the cells of an organism throughout its development. Out of this diversity, we focus our interest here on the epithelial and the mesenchymal cells.

Each of these cell types displays specific characteristics. Epithelial cells have apicobasal polarity, are connected by cell junctions, and can form epithelial layers that cover many tissues, whereas mesenchymal cells lack apicobasal polarity, are less connected, but are more motile [2]. Both cell types can nonetheless undergo highly connected mutual transitions. EMT and its reverse process MET are thus well-studied in embryonic development, and several rounds of EMT and MET are described for the generation of various organs throughout their differentiation and development. Molecular studies to analyze these transitions show the involvement of several regulatory networks of transcriptional and translational regulators, linked to post-transcriptional and posttranslational modifications. Gene and protein regulation participate in cellular processes such as cell-cell contact, cell adhesion, cell polarity, cytoskeletal organization (which implies cell migration), all of which are responsible for successful, correct transitions [3-5].

During embryonic development, zygote totipotency is lost after successive differentiation rounds. Using somatic cells, it has recently become possible to develop Induced Pluripotent Cells (iPSC), which have very similar totipotency throughout somatic cell reprogramming [6,7]. Reprogramming is antagonistic to cell differentiation, although both processes share many common players and mechanisms [8]. Overexpression of the so-called Yamanaka factors (Oct4, Klf4, Sox2, and c-Myc) that allow somatic cell reprogramming to iPSC [9,10] was a breakthrough. This finding is important not only for understanding the underlying mechanisms, but also given the potential for regenerative medicine, disease modeling, and disease therapy.

Several studies describe a role for MET transition in early reprogramming phases [11-13], whereas EMT-like changes might be necessary in later reprogramming stages. Results from sequential reprogramming with higher efficiency also postulate an initial EMT-MET that helps erase the cell epigenetic memory and facilitates cell fate conversion [14]. Many of these findings have been described and are discussed extensively in several recent reviews [2,15].

The Dido Gene is Involved in Differentiation and Somatic Cell Reprogramming

The Dido locus is a gene complex that encodes three proteins –Dido1, Dido2, and Dido3– that are generated through alternative splicing. The common N-terminal part of the three isoforms bears a plant homeodomain (PHD) [16,17] that binds to histone 3 trimethylated on lysine 4 (H3K4me3) and connects Dido to chromatin remodeling processes [18]. Dido3 and Dido2 also have a transcription elongation factor S-II subunit M (TFSIIM) domain [17], which mediates binding to RNA polymerase II (RNA pol II) [19,20], and also bear the SPOC domain, linked to Spen family proteins and involved in transcriptional repression [21]. The last Dido exon, exon 16, is specific to the largest isoform, Dido3; it has an arginine-/proline-rich, lowcomplexity region, a central coiled-coil domain, and a C-terminal RNA recognition motif. Dido3 is expressed ubiquitously, whereas the smaller splice variants are detected only transiently.

Deletion of Dido exons 3 and 4 (DidoΔNT) results in N-terminal truncation of all three isoforms. This leads to genomic instability due to centrosome amplification and centromere-localized DNA breaks [22,23], but yields live mice, although they develop myeloid neoplasms [16].

It is of interest to note that Dido3 is also related to stemness, as it is expressed strongly in gastrulating embryos, a time at which EMT is critically important [24], as well as in Embryonic Stem Cells (ESC) and in iPSC. In contrast, it is downregulated during differentiation, and is less expressed in differentiated somatic cells [18]. It is thus not surprising that deletion of Dido3-specific exon 16 results in embryonic lethality at day 8.5. This phenotype is reported for DidoΔCT mutant mice, with constitutive deletion of the C-terminal part (equivalent to the coding part of exon 16) [25], and also for the conditional targeted mutant Dido3ΔE16, with loxP sites flanking exon 16 after Cre recombination [26]. ESC derived from both of these mutants do not differentiate in vitro, but maintain their self-renewal capacity [25,26].

Another notable observation is that Dido3ΔCT/ Dido3ΔE16 ESC are able to self-renew without Leukemia Inhibitory Factor (LIF) supplementation of the culture medium. In these conditions the cells change morphology, grow as a monolayer and are flattened, with a fibroblast-like shape. When injected into nude mice to form teratomas, these tumors are better termed teratocarcinomas; they maintain stem cell marker expression and apparently do not differentiate into cells of the three germ layers (unpublished results, A. Fütterer), in contrast to equivalent ESC cultured with LIF, which maintain typical ESC morphology [25].

Dido3 participates in correct splicing of its own isoforms, as Dido3ΔCT/Dido3ΔE16 mutants do not express the smallest isoform, Dido1 [26]. This is important because Dido1 must be upregulated during differentiation [18] and is involved in downregulation of stemness genes such as Pou5f1 (which encodes Oct4) [20]. As Dido3ΔCT mutants lack the C-terminal binding site, they do not express Dido3 on centrosomes [27]. In addition, interaction of the SFPQ splicing factor with exon 16 links Dido3 to correct, efficient RNA splicing and alternative polyadenylation [28,29]. The connection of Dido3 to cell polarization should also be noted; Dido3ΔCT mutant ESC centrosomes do not position correctly when cell polarization is necessary at the onset of differentiation [20].

We recently found that Dido3 is relevant not only for differentiation, but also for somatic cell reprogramming. For these experiments, we crossed heterozygous Dido3-exon16 floxed mice and transgenic Tg(tetOPou5f1, Sox2,Klf4,Myc)1Srn [7] mice with doxycyclineinducible expression of the reprogramming genes. From the offspring, we derived Dido3ΔE16 Mouse Embryonic Fibroblasts (MEF), which were infected with Ad5CMVCre virus to induce homozygous deletion of exon 16. When treated with doxycycline, these MEF do not undergo reprogramming [26]. In addition, we studied the molecular mechanism and found that Dido3 exon 16 interacts with the helicase Dhx9, whose functions include participation in R-loop processing and in transcription termination [30]. Our analysis of Dido3ΔE16 mutant ESC and MEF using transcriptomic tools, ChIP-seq, RNAseq, protein interaction, and cellular studies identified a central role for Dido3, specifically Dido3 exon16, in regulating RNA metabolism. Exon16 deletion triggered defects in RNA splicing and RNA termination. We verified high-throughput data on some important sample genes such as Carm1, with a role in early developmental differentiation [31], Jam2, associated with high stem cell expression [32] and involvement in cell polarization [33], and Pou5f1/Oct4, the main gatekeeper for self-renewal in ESC [34]. We detected transcriptional read-through provoked by an inability to resolve the increase in R-loop formation, caused by impaired Dhx9 helicase recruitment through Dido3 exon16. Both cell types suffer genomic instability, DNA damage, and replication stress; ESC thus do not differentiate nor do MEF undergo somatic cell reprogramming [26].

The phenotype of the DidoΔNT mutant MEF differs remarkably from that of exon16-deleted mutants. Although this mutant has RNA splicing defects [28], there is no increase in R-loops and replication stress; ESC derived from these mice can differentiate in vitro, and the MEF undergo somatic reprogramming [26].

These data led us to test whether the genes whose expression is altered by exon16 deletion were identified in reprogramming studies. We combined our gene expression data from Dido3ΔE16 ESC in self-renewal conditions and from embryonic bodies (EB) at the onset of differentiation (GEO: GSE85029) [20] and GEO: GSE152346 [26]) with those from Samavarchi-Tehrani et al. [12]. The latter study, an exhaustive time-course microarray analysis of the reprogramming process, found the Dido gene in the initiation phase, at the time MET is activated (Figure 1). Encouraged by this result, we identified additional common genes (Table 1). Although we did not detect the so-called classical EMT driver genes [3,35,36], we found several genes necessary in the transition pathways. We divided them into various functional categories such as stemnessrelated, transcription factors, and zinc-finger proteins, genes involved in epigenetic changes (transcriptional and translational), genes related to cell cycle, cytoskeleton, apoptosis and repair, genes coding for enzymes such as ligases or kinases, and other functions (Table 1). This set of genes shows enormous potential to influence the EMT/ MET pathway; further studies are needed to delineate its specific roles. 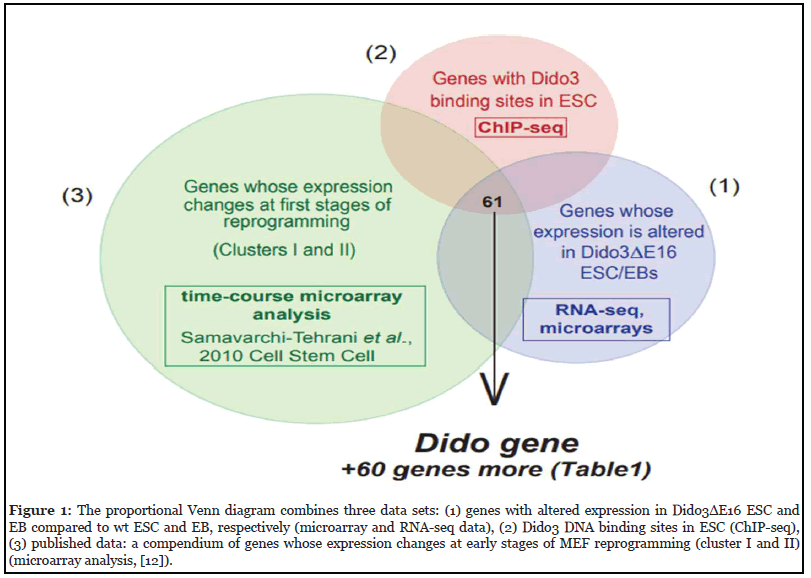 EMT and MET proceed not only in physiological conditions, but also in a pathological manner, and deregulated EMT participates in tumor formation and cancer metastasis by providing cells with migratory and invasive properties [3,5,36-38]. Note that EMT in cancer is mostly partial and does not complete the transition [39-42]. Many tumor cells remain in transition states or undergo dynamic, reversible transitions and can express epithelial and mesenchymal characteristics, which is linked to increased tumor aggressiveness [43]. On the other hand, MET in circulating cancer cells can lead to secondary tumors when they invade a metastatic niche [42,44].

As stated above, Dido expression changes do not affect the classical EMT-TF (transcription factors) that drive EMT or MET initiation. As also mentioned and reviewed in depth by others [45,46], cancer initiation and progression depend on altered regulation at several levels, including transcriptional and translational processes, expression of non-coding RNA, alternative splicing events, and protein stability; Dido is likely to play its important role in these areas. Evidence for this hypothesis was demonstrated by links of Dido function to alternative splicing, transcription termination, and protein stability [26,28,29]. Another central feature in the control of EMT derives from EMTTF interaction with epigenetic modifiers and modulators of chromatin configuration [38,39,45,46]. Epigenetic shifts enable cell plasticity. Candidate genes such as Wdr5 (WD repeat-containing protein 5), Dnmts (DNA methyltransferases), and the methyltransferase Suz12 (part of the Polycomb 2 repressor complex) (Table 1), all of which are influenced by Dido, have also been discussed as possible epigenetic modification components in EMT [45,46]. The significance of Dido in this field was recently underlined by an exhaustive computational study that integrated multi-omics data and Dido domain composition, to propose a molecular mechanism for Dido3 in RNA pol II pausing and long-range chromatin interactions, which have pleiotropic consequences [47].

Our description of Dido gene involvement in hematological myeloid neoplasms [16] and the work of several other groups implicating Dido in tumor progression or prognosis (with some contradictory results) [48-51] identify an avenue for further research. The contrasting results in cancer studies might derive from the fact that most did not distinguish between different Dido isoforms and their autoregulation.

Another question regarding Dido influence in cancer arises from the cell reprogramming results. Considering the failure of primary Dido3ΔE16 MEF in somatic cell reprogramming, one might anticipate reduced tumor transformation capacity. The point of interest here is that immortalization of these MEF not only restores, but also greatly increases their reprogramming capacity [26]. Extrapolating these results and bearing in mind that inactivation of p53 and/or RB (retinoblastoma) pathways in cancer is a common phenomenon, it will be very interesting to determine the outcome of additional Dido mutations in cancer cells, and whether Dido has a role in cancer stem cell development.

A simplified scheme illustrates EMT and MET processes in differentiation, cell reprogramming, and tumor formation, and the likely involvement of the Dido gene (Figure 2). The need to understand Dido gene function in tumor formation and metastasis encourages us to explore and clarify its role in oncogenic transformation and cancer progression, further instances in which EMT and MET are fundamental. 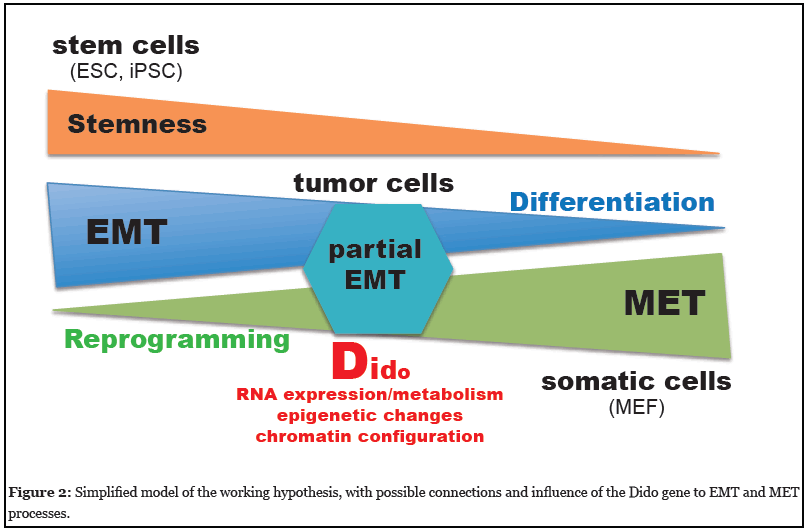 The authors declare no conflict of interests. The authors thank Catherine Mark for editorial assistance.