Copyright: © 2019 Loftley AE, et al. This is an open-access article distributed under the terms of the Creative Commons Attribution License, which permits unrestricted use, distribution, and reproduction in any medium, provided the original author and source are credited.

Insulinomas are insulin secreting tumors arising from spontaneous mutations of the ductal, acinar, or islet cells of the pancreas [1,2]. They are rare, having an incidence of only four cases per million people per year [3]. Patients typically present with fasting hypoglycemia, experiencing neurologic symptoms like confusion, changes in vision, or abnormal behavior and autonomic symptoms like palpitations, diaphoresis, or tremulousness [4]. These hypoglycemic episodes are due to decreased release of hepatic glucose. There is a slight predilection for females (57%) and those of older age (median of 50 years) [2,5]. Insulinomas can also be seen in MEN1 (multiple endocrine neoplasia 1) [2].

Diagnosis is made by finding elevated insulin levels during a hypoglycemic episode. This is usually achieved by monitoring glucose during a 72 hour fast in the hospital. However, patients with hypoglycemia unawareness often have an atypical presentation and can be difficult to diagnose. Their hypoglycemia unawareness is due to recurrent hypoglycemic episodes, which can desensitize the patient, especially in those with increased exposure to hypoglycemia and frequent episodes of hypoglycaemia [6-8]. In these patients, using a continuous glucose monitor in the outpatient setting can aid in the diagnosis of an insulinoma.

A 34-year-old female was referred to our outpatient endocrinology clinic for evaluation and treatment of hypoglycemia that had been present for 3 years. The hypoglycemic episodes had become more frequent 3 months prior to her presentation, which prompted her to seek medical evaluation. She is an elementary school teacher and reported daytime hypoglycemic episodes that had started to impact her job performance. She had access to a glucometer at work, through the school nurse, and had confirmed blood sugars of less than 70 mg/dL on multiple occasions. The patient reported both hypoglycemic episodes and symptoms after eating meals high in non-complex carbohydrates. Symptoms and hypoglycemic episodes resolved after carbohydrate intake but would return a few hours after food intake. She denied nocturnal hypoglycemic symptoms and denied awareness of nocturnal hypoglycemic episodes. Her social habits were unremarkable; no history of alcohol consumption or restrictions in diet. There was no history of gastric-bypass or pancreatic surgery, no history of diabetes or impaired glucose tolerance, and the patient was otherwise in good health. Her physical exam was unremarkable and vital signs were stable. At the time of her initial consultation, she was advised to purchase a glucometer, check blood sugars fasting and when symptomatic, and she was referred to a dietitian for implementation of a reactive hypoglycemia diet.

The hemoglobin A1c value on the day of her initial consultation was 3.9%. Labs were also obtained 1 week later after a 12 hour overnight fast (Table 1). These labs were remarkable for undetectable beta-hydroxy butyrate level (<0>60 mL/min/1.73sq.m), normal ACTH (19 pg/ml) and cortisol (16.7 ug/dL) levels, and undetectable human insulin antibody (<0>Table 2). After seeing the dietitian, she commenced a reactive hypoglycemia diet which initially resulted in improved blood sugars and fewer episodes of hypoglycemia. However, a few weeks later, the patient reported that the reactive hypoglycemia diet was no longer working. A Dexcom G6 continuous glucose monitor (CGM) was ordered for the patient to wear for personal use due to the inappropriate response to the reactive hypoglycemia diet and due to laboratory evidence of inappropriate insulin secretion (10.6 mU/L) for a blood glucose level of 71 mg/dL.

CGM data available for physician interpretation was limited to 72 hours due to close proximity of insurance approval for the device and her scheduled follow-up appointment with endocrinology (Figure 1). Glucometer data was available for a longer time period and was used for clinical correlation (Figure 2). Review of Dexcom CGM data revealed nocturnal hypoglycemia, despite her unawareness while sleeping. The patient was admitted to the hospital for a supervised 72 hour fast. She was advised to wear her CGM while hospitalized as her hypoglycemia awareness was impaired and we felt this would help facilitate more accurate timing of hypoglycemic episodes. Hypoglycemia was noted 9 hours into the fast and the patient was asymptomatic. Point of care (POC) glucose was 55 mg/dL, which correlated with plasma glucose of 55 mg/dL. Additional labs were drawn at the time of the episode and confirmed endogenous insulin secretion which was not suppressed by hypoglycemia (Table 3A). One milligram of glucagon was administered at the end of the fast and the plasma glucose level rose >25 mg/dL (Table 3B). 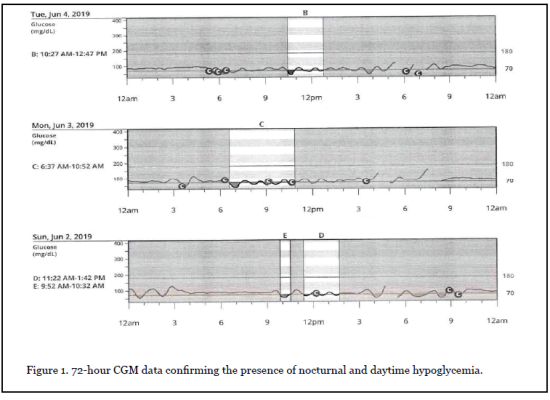 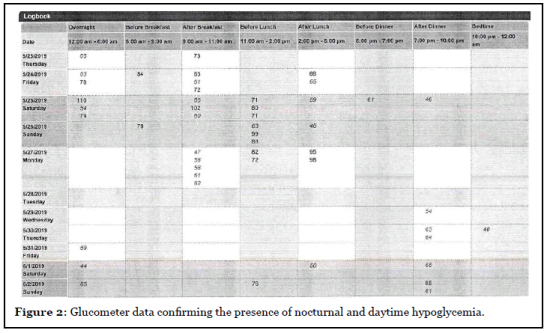 Table 3b: Laboratory data confirming response to 1 mg of glucagon at the end of the 72-hour fast.

Abdominal helical computed tomography (CT) was then performed and revealed a 2.4 x 1.6 cm arterially hyper-enhancing mass in the tail of the pancreas, suspicious for neuroendocrine tumor, specifically insulinoma in the setting of hypoglycemia (Figure 3). Chest CT was then performed and showed no evidence of metastatic disease. 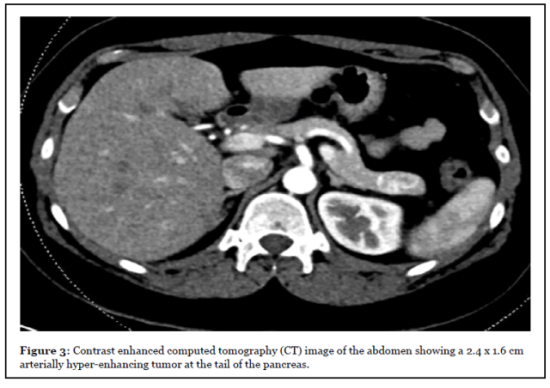 Surgical consultation was placed, given the clinical context, and laparoscopic distal pancreatectomy and splenectomy were recommended. Our patient remained hospitalized until the time of surgery 4 days later. In the interim, diazoxide (3 mg/kg/day) and 10?xtrose (D10) intravenous infusion were initiated for medical stabilization prior to surgery. The last dose of diazoxide was administered approximately 8 hours prior to surgery and D10 was discontinued immediately following tumor resection. The pathological examination confirmed a well-differentiated neuroendocrine tumor measuring 2 cm in diameter at the body and tail of the pancreas. Immunohistochemical staining was positive for synaptophysin and the KI-67 proliferative index was 1%. Pathologic Stage Classification (pTNM, AJCC 8th Edition): pT2 pN0. Staining for insulin and chromogranin A were not available at our institution.

Our patient required transient insulin therapy for 72 hours post-op and was discharged home without insulin. She was advised to continue wearing her CGM. Six weeks after surgery the patient presented for outpatient endocrinology follow-up. No additional episodes of hypoglycemia were reported and was confirmed via review of CGM data (Figure 4). Fasting c-peptide and glucose levels 8 weeks after surgery were 2.31 ng/ml and 99 mg/dL, respectively.

Insulinomas are rare neuroendocrine tumors of the pancreas. The hallmark of an insulinoma is fasting hypoglycemia. This can present with autonomic symptoms such as diaphoresis, tremor, palpitations, or neuroglycopenic manifestations which include confusion, visual changes, seizures, or coma. Insulinomas are difficult to diagnose. One study reports an average of 18 months of symptoms before an insulinoma diagnosis is made [1]. The gold standard for diagnosis of insulinoma remains measurement of plasma glucose, insulin, c-peptide, and proinsulin during a 72 hour fast.

CGM allows for the ongoing measurement of interstitial glucose. CGM can provide insight into the daily fluctuations of a patient’s glucose, providing the clinician with more data points to assist in diagnosis or management. Most of the literature related to CGM is regarding its use in diabetes management, although with improving technologies more applications of CGM are being researched.

Limitations to widespread use of outpatient CGM include cost and insurance coverage, both of which largely determine which patients are eligible for monitoring. The CGM data in this case was limited to 72 hours but was enough to lead to the appropriate diagnostic evaluation and treatment. Thus, there may be a role for professional CGM monitoring in which practices would purchase their own CGM devices that patients presenting with hypoglycemia could wear for 3 to 7 days. This would eliminate the need for insurance approval and would reduce barriers associated with the cost of personal CGM devices

Although insulinomas are very rare and difficult to diagnose, our case is an example of how ambulatory CGM may aid in quicker diagnosis and therefore a potential reduction in morbidity and mortality.