Study on Imaging Findings, Pathology and Treatment of Cerebellar Infarction

Copyright: © 2020 Zhou X, et al. This is an open-access article distributed under the terms of the Creative Commons Attribution License, which permits unrestricted use, distribution, and reproduction in any medium, provided the original author and source are credited.

Materials and Methods: The clinical cases of cerebellar infarction were collected randomly, and the changes of imaging manifestations and clinical treatment were observed, analyzed and discussed.

Results: The delayed enhancement from the cortex is caused by the countercurrent of the contrast medium into the capillaries through the vein and unobstructed capillary network. This phenomenon of venous reflux can provide pathological basis for the choice of treatment. Dehydration can significantly improve the condition of patients with cerebellar infarction.

The patient was admitted with headache, vertigo and ataxia for half a year with a NIHSS score of 5. After admission, the patient underwent MR scan as shown in Figure 1. Abnormal mass in the left cerebellar hemisphere and cerebellar worm, showing long T1 and long T2 abnormal signal, high signal on T2-FLAIR, unclear boundary, obvious edema of surrounding tissue, compression near the brainstem, and the midline shifted slightly to the right. After injection of Gd-DTPA, the focus showed mild heterogeneous enhancement. Imaging diagnosis: The left cerebellar hemisphere and cerebellar worms were abnormally occupied, and followup was recommended. After three months of traditional conservative treatment, the patient had no improvement in symptoms, so he was reexamined by MRI (Figure 2). Surgical resection was performed a week later, and the final pathology was cerebellar tissue and focal cell proliferation. 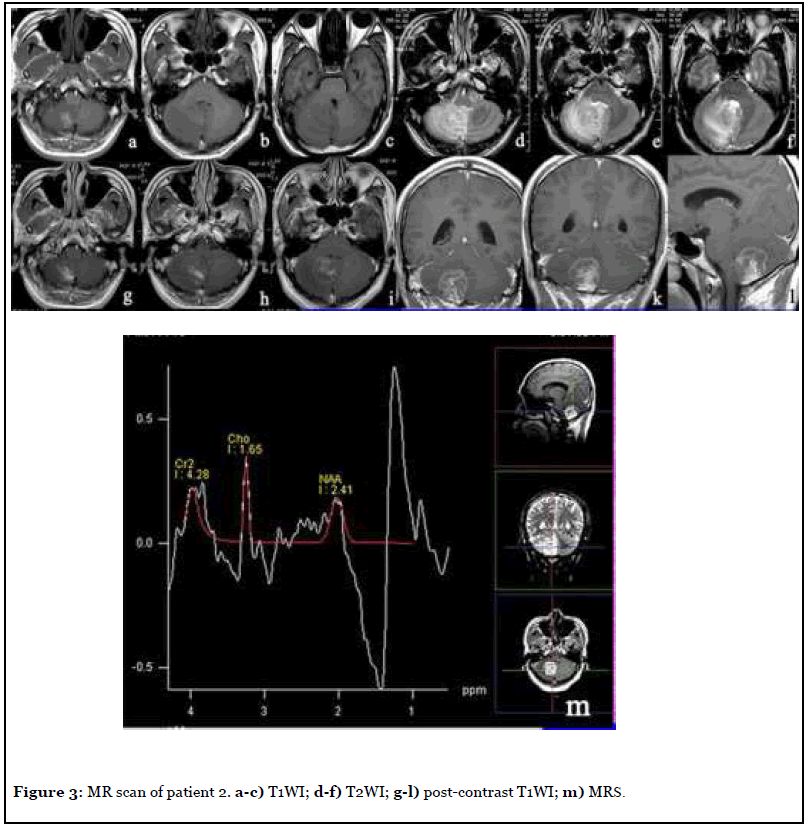 The patient was admitted to the hospital with dizziness and weakness of the left limb for 3 months, with a NIHSS score of 7. After admission, the patient underwent MR scan as shown in Figure 4. Abnormal space occupying in the left cerebellar hemisphere, showing abnormal signal of long and short T1 and long T2, high signal on T2-FLAIR, unclear boundary, obvious peripheral edema, slight pressure near the brainstem, midline shift to the right, delayed contrast-enhanced scan showed obvious heterogeneous enhancement, and NAA peak in the central area of the lesion decreased significantly while Cho peak increased. Imaging diagnosis: Abnormal mass in the left cerebellar hemisphere, tumor cannot be excluded, further examination is recommended. Three days later, PET-CT was performed as shown in Figure 4, and the diagnostic opinion was that the metabolic activity of the left cerebellar hemisphere was significantly lower than that of the contralateral cerebellar hemisphere, suggesting that malignant lesions were more likely. Clinicians recommend dehydration treatment first, and then re-examining the MR three days later, as shown in Figure 5: The lesion and surrounding edema basically disappeared, and there was no obvious abnormal enhancement after injection of Gd-DTPA. The SWI was re-examined the next day as shown in Figure 6. Patchy low-signal foci and multiple small veins were seen in the left infarcted area. Two weeks after the cessation of dehydration treatment, MR examination showed that abnormal space-occupying signal appeared again in the left cerebellar hemisphere, and the enhanced scan showed obvious heterogeneous enhancement (Figure 7). Clinical treatment continued according to cerebellar infarction. 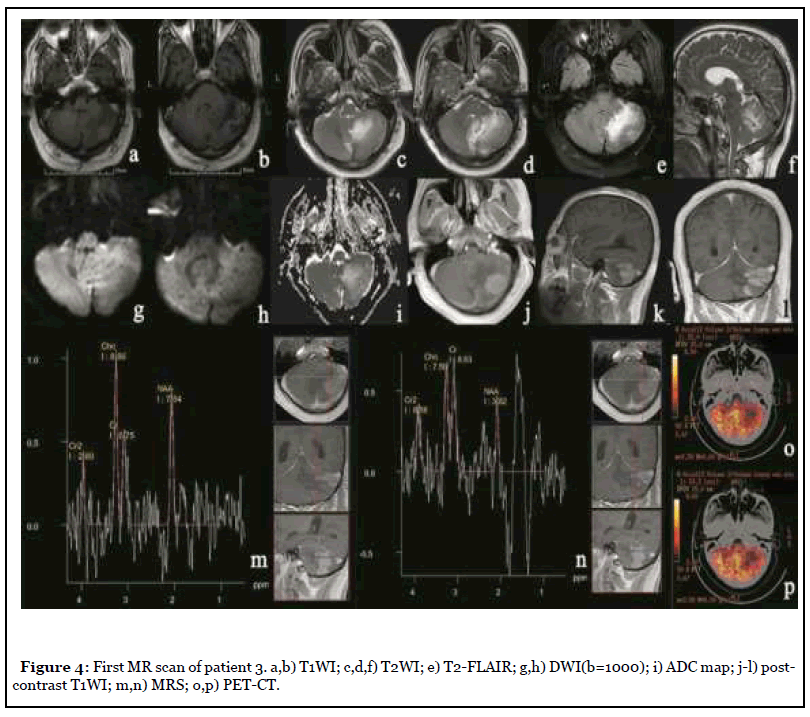 The patient was admitted to hospital with dizziness, vomiting and weakness of the right limb with a NIHSS score of 8. MR scan was performed after admission, as shown in Figure 8. The right cerebellar hemisphere showed abnormal space occupation, showing long T1 and long T2 abnormal signal, high signal on T2-FLAIR, iso-or low signal on DWI (b=1000), high signal on ADC map, unclear boundary, obvious peripheral edema, and the delayed contrast-enhanced scan showed obvious heterogeneous enhancement. After two weeks of traditional conservative treatment, the symptoms were not relieved, and the reexamination of MR was shown in Figure 9. The scope of focus and edema was enlarged. 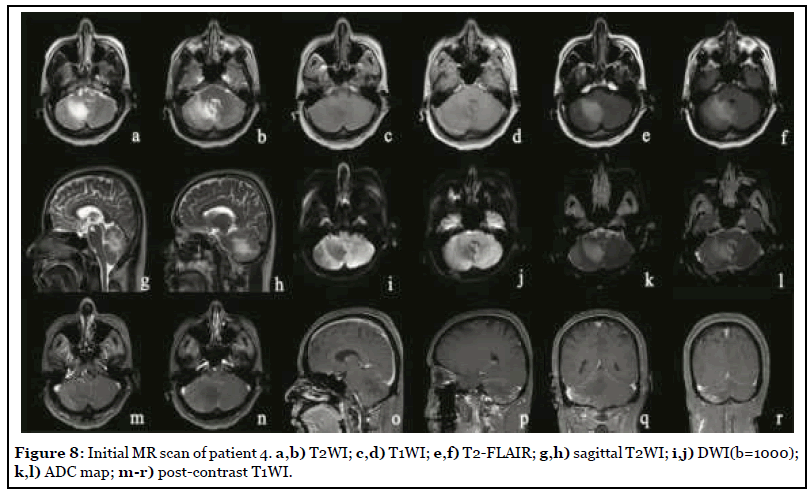 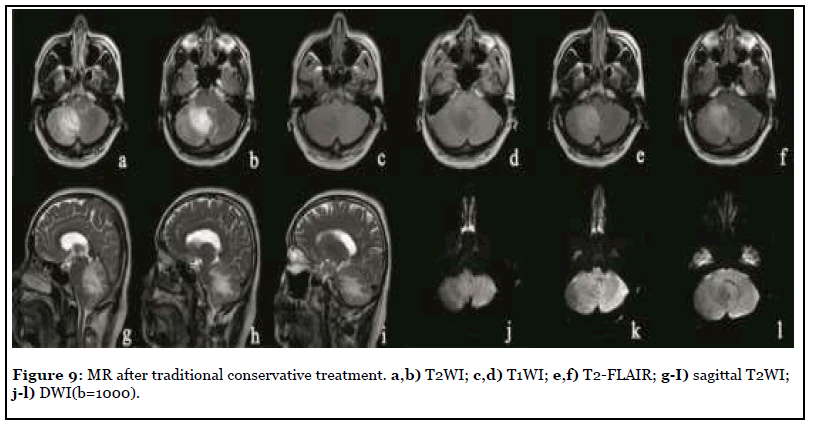 The delayed enhancement of cerebellar infarction from the cortex was caused by the contrast medium countercurrent flowing into the capillaries through the vein and unobstructed capillary network. This phenomenon of venous backflow can improve the state of hypoxia in the infarcted area and provide pathological basis for the choice of treatment. Dehydration can significantly improve the condition of patients with cerebellar infarction.

Magnetic resonance spectroscopy (MRS) has been widely used in recent years and plays an important role in the diagnosis and differential diagnosis of nervous system diseases [7]. The MRS of patients 2 and 3 showed a significant decrease in NAA peak and an increase in Cho peak, while tumors, including low-grade gliomas that were difficult to distinguish from cerebellar infarction, also showed the same MRS [8]. This is because cerebellar infarction and low-grade gliomas are dominated by neuronal destruction, so NAA, which can reflect the number of neurons [9], is significantly decreased in both. Choline as an indicator of the metabolic activity of cell membrane [10], whether cell proliferation or cell lysis, will cause the increase of Cho peak [11]. Therefore, MRS plays a limited role in differentiating cerebellar infarction from glioma. PET-CT of patient 3 showed slightly low density cerebellar infarction with moderate uptake of FDG, while low-grade gliomas also showed moderate uptake of FDG [12], indicating that the differential role of PET-CT is limited.

Delayed enhancement was found in all 4 cases on the first MR scan. From the study of cerebral infarction, the T1 high signal intensity of cerebral parenchyma after intravenous thrombolysis is one of the high-risk factors of cerebral hemorrhagic transformation [13], but the cerebral parenchyma enhancement before thrombolysis is rare and has no significant correlation with thrombolytic therapy [14]. Some people think that the ischemia-reperfusion after thrombolysis leads to the destruction of the bloodbrain barrier and the extravasation of contrast medium [15], and its pathophysiological mechanism is that the stimulation of reperfusion promotes the secretion of potent vasodilator and causes the injury of vascular endothelium [16]. But our results are different. It is generally believed that the destruction of BBB occurs as early as 6 hours after infarction, but delayed enhancement occurs a few days later [17,18], and occurs around the lesion area. We believe that the delayed enhancement in 4 patients with cerebellar infarction shows that some of the capillary network is unobstructed and the contrast medium can enter the capillaries, but the arterial end is blocked, so the contrast medium comes from the venous end, and through the venous and capillary network backflow into the capillaries to produce enhancement. The enhancement in all the 4 patients began from the cortex, and thin strip enhancement could be seen locally. The thin strip enhancement was the manifestation of venule dilatation and filling after venous reflux. These venules could be observed from the patient’s SWI sequence. Patient 3 reexamined the SWI sequence after dehydration treatment, and we found that there were a large number of branched venules in the infarcted area. High-field MR has proved that there are a large number of venules in the periphery of the cerebellum, while the flaky low-density focus is caused by the overall T2* effect of deoxyhemoglobin in the capillaries [19]. After cerebellar infarction, the perfusion pressure in the infarcted area decreases, causing venous system backflow and venule filling. The extremely low blood oxygen concentration in the infarcted area caused the venous blood oxygen saturation to decrease again, which enhanced the T2* effect. Moreover, the outer margin of the cerebellum is adjacent to the sigmoid sinus and transverse sinus. There is a sufficient anatomical basis for venous backflow after cerebellar infarction to prevent or even weaken the progression of infarction. The disappearance of delayed enhancement in patient 3 after dehydration treatment does not mean that there is no venous backflow, but the problem of scanning phase, because patient 3 reappears delayed enhancement 2 weeks after the cessation of dehydration treatment, indicating that the capillaries in the enhanced area are always unobstructed. The “microcirculation” formed by venous reflux always exists, and complete coagulation has not occurred in the capillaries in the enhanced area.

Obstructive hydrocephalus and cerebellar tonsillar hernia caused by space-occupying effect of cerebellar infarction are the most common. Traditionally, suboccipital craniectomy and cerebrospinal fluid drainage by ventriculostomy are the first choice for the treatment of acute cerebellar infarction [22]. The treatment experience of patient 3 tells us that mannitol osmotic therapy is one of the first choices for acute cerebellar infarction. Dehydration can reduce intracranial pressure, reduce the pressure of interstitial fluid outside the lumen on the blood vessel wall, promote the smooth flow of microcirculation, improve the effect of thrombolytic therapy, and maintain the near-death state of brain tissue in the focus of infarction waiting for the establishment of collateral circulation. In addition, mannitol can be used in combination with hormones, which can reduce the cellular inflammatory response caused by hypoxia, increase the tolerance of tissues and cells in the infarcted area, and enhance the effect of mannitol.

The opening and patency of the capillary network and venous refluxing are the important pathological mechanisms of cerebellar infarction, which change the pathophysiological state of the infarcted area, prolong the duration of the traditional ischemic penumbra and widen the time window for treatment. The golden 6 hours of cerebral infarction is difficult to apply. Mannitol osmotic therapy combined with hormone is one of the first choice for the treatment of acute cerebellar infarction, timely dehydration can even replace craniotomy decompression.