Copyright: © 2020 Low I-M, et al. This is an open-access article distributed under the terms of the Creative Commons Attribution License, which permits unrestricted use, distribution, and reproduction in any medium, provided the original author and source are credited.

Graphene is often referred to as bi-, tri- or few-layered (4 to 10 layers), despite it being single-layered. Two commercial graphite samples (G and GE) and three commercial graphene samples (G1, G2, and G3) were characterized by Raman spectroscopy, scanning electron microscopy, X-ray diffractometry and atomic force microscopy. The structural similarities and differences between graphite and graphene were compared with literature information. A mixture of hexagonal (2H) and rhombohedral (3R) phases were identified in samples G1, G2, G3, and GE by X-ray diffraction. Graphene is observed to differ from graphite-based on Raman spectroscopic studies at room temperature. Atomic force microscopy on graphene films at 514 nm radiation showed ~ 3, 7, and 9 layers for G1, G2, and G3, respectively.

The most important elemental-carbon-based materials include zero-, one-, two-, and three-dimensionalstructured fullerenes, carbon nanotubes, graphene, and graphite, respectively. These non-metallic carbon materials have properties that are similar to semiconducting metals [1-3].

Honeycomb hexagonal carbon atoms in graphite exist as crystalline hexagonal (2H) or rhombohedral (3R) phases. Carbon layers exist in an ABAB sequence in the commonly occurring 2H graphite structure with B layers shifted to a registered position relative to the A layers. The ABCABC stacking sequence in the 3R structure has C and B layers shifted by the same distance relative to the B and A layers, respectively [4]. Although highly ordered/ oriented graphite has a 2H hexagonal structure, a minor fraction of the 3R rhombohedral phase may remain in high-quality samples [5].

The discovery that the special allotrope of carbon, graphene, can be fabricated by using the scotch tape approach to produce a single layer of graphite, and the thinnest- and strongest-known material universally, led to an increase in its popularity [6]. Graphene is often termed bi-, tri-, or few-layered (4 to 10 layers). Two-dimensional graphene consists of a sp2-hybridized carbon monolayered sheet network of densely packed rhombohedral-arranged honeycomb hexagonal crystal lattices and contains up to a dozen shells [7,8]. Graphene’s properties make it suitable in a variety of applications, such as batteries, sensors, structural composites, functional inks, electron emission displays, catalyst supports, in the biomedical field, and potentially in other future research fields [1-3,8-16].

Because graphite and graphene have similar structures, it is difficult to distinguish their differences through a single technique of characterization; multiple techniques are required. The aim of this work was to utilize a suite of standard characterization techniques in order to elucidate the nanostructures of graphene. We characterized two commercial graphite and three graphene samples using scanning electron microscopy, X-ray diffractometry, Raman spectroscopy, and atomic force microscopy. Their structural similarities and differences were compared with literature information.

Raman spectra were collected on a Labram 1B dispersive Raman spectrometer at 632.8 nm excitation, 2 mW power, a 150 μm slit, 50× objective, 600 lines per mm diffraction grating, and a Peltier-cooled CCD detector at - 40°C. The sample collection time was 60 sec (10 sec for silicon). All Raman spectra were shifted by the same 520.7 wavenumbers to correct for the silicon peak.

Samples were run on a powder diffractometer D8 Advance (Bruker AXS, Germany), with a copper Kα radiation source at 40kV and 40mA and a LynxEye detector. The diffraction data were collected at a 2-theta scan range of 7.5–90°, a step size of 0.015°, a time/step of 0.7 sec, and a total scan time of ~ 60 mins.

An atomic force microscope (Dimension Icon FastScan, TESPA-V2 probe, Bruker, California, USA) with a nominal spring constant of 42 N/m, the resonant frequency of 300 kHz was used in tapping mode to characterize the dimensions and thickness of graphene sheets. Before the measurements, graphene powders were initially sonicated in water to break up the nanoplatelets for uniform dispersion and then spin-coated on a mica substrate.

The morphology of three (G1, G2, and G3) graphene samples, as revealed by scanning electron microscopy is shown in Figure 1. These samples exhibited a flake-like or layered structure of graphene nanoplatelets. Some graphene layers appeared to have been “lifted” from the surface, which is an indication of material exfoliation. The graphene layers appeared reasonably thick, which suggests that these materials are graphene nanoplatelets rather than single layers. The use of either transmission electron microscopy or atomic force microscopy is necessary to ascertain the existence of exfoliation and determination of the thickness nanoplatelets (i.e., number of graphene layers).

Figure 2 shows a typical energy dispersive spectrum of graphene sample G3. Traces of elements, such as Al, Si, O, and Fe, are visible in the sample. Nonetheless, the graphene samples are of good quality with a purity above 98%.

Figure 3 shows the Raman spectra of two graphite and three graphene samples. The number of layers in graphene can be estimated from the intensity, shape, and position of the G and 2D bands. Whereas the 2D-band changes its shape, width, and position with an increase in the number of layers, the G-band peak position shows a down-shift with the number of layers. The characteristic peaks of graphene nanoplatelets can be seen in three bands, namely the G, D, and 2D bands at 1,578 cm-1, 1,334 cm-1, 2,679 cm-1, respectively. The vibration of sp carbon atoms yields the appearance of the G band as the primary characteristic band of graphene. The disordered vibrational peak of graphene is considered to ensue from the existence of a D band, which is applied to characterize structural defects in graphene samples [19]. Nanoplatelets of the graphene samples are well-defined with minimum defects present.

The concentration of Raman-active defects in ppm (parts per million) can be determined by taking the ratio of the defect density (nD) and the number of carbon atoms (nC) [20]:

Where I(D), and I(G) are the integration area of the D and G bands, respectively. Data in Figure 4 (a & b) show the integral area ratio, and the concentration defects for GE, and G graphite, and G1-G3 graphene samples, respectively. The measured I(D)/I(G) ratio for both G, and GE graphite samples are higher, thus indicating the defects are higher than in the G1-G3 graphene samples. Moreover, the defects of concentrations for G1, and G3 graphene samples are ~ 3 ppm, which are smaller than that for the G2 graphene sample (~ 10 ppm). A monolayer graphene generally exhibits no D band with the 2D band having a higher intensity than the G band [18]. Thus, the display of a weak D band in samples G1 and G3 indicates the presence of graphene with multilayers.

The diffraction patterns in Figure 5a show the crystalline structures of the two graphite and three graphene samples. The characteristic diffraction peaks of samples positioned at approximately 26.8°, and 55.0° correspond to the reflection of crystal planes (002) and (004), respectively. The former corresponds to an interlayer distance of 0.34 nm for (002) planes. It is noted that these peaks are quite broad for graphite sample G due to its smaller crystalline sizes and more disordered structure. In contrast, the graphene samples have sharp (002) and (004) peaks, thus indicating much larger crystallite sizes and well-ordered structures. Again, it can be observed that graphite G is quite different from graphite GE with a distinctive line-shift to the left at 26.8° and 55.0°. This line shift to lower angles for graphite G suggests the interlayer distance of (002) planes has increased due to its smaller crystallite size and a higher degree of disorder within the structure [21].

Calculations of the apparent crystallite size (Lc) along the c-direction which will provide the information on the thickness of graphene nanoplatelets and thus the number of layers present. The number of graphene layers (Nc) along the c-axis can be calculated using the following equation [20]:

Table 1 shows the calculated values of Lc and Nc for graphene samples (G1-G3). The multilayer nature of nanoplates in these samples is confirmed by the existence of 75 layers in G3, 101 layers in G2, and 102 layers in G1. These values are in good agreement with those obtained by Seehra and co-workers [20]. They calculated the values of Lc (22 - 37 nm) and the number of layers (65 – 109) for some commercial graphene materials from the analysis of XRD data.

Table 1:The Crystallite size Lc, d-spacing for (002) peak, and the numbers of layers along the c-axis for G1-G3 graphene samples.

Figure 5b shows the expanded view of the corresponding diffraction patterns at 2-theta = 40-50°. Several peaks corresponding to 2R and 3H phases can be observed. It is well known that graphene samples contain both phases [20,25]. Again, Seehra and co-workers [20] have analyzed the XRD data of 16 commercial graphene materials and observed the presence of 2R and 3H phases in them. The presence of the 3R structure is important for graphene materials since the 3R structure is a semiconductor with a tunable bandgap, and it is less stable than the 2H structure.

Images in Figure 6 (a-c) show the results of 3D atomic force microscopy and height profiles of three graphene samples (G1-G3). The layer thickness of graphene samples on the mica substrate was measured using NanoScope Analysis (version 1.0). The height differences of graphene G1, G2, and G3 are ~1.2 nm, ~2.4 nm, and ~2.8 nm, respectively. Single-layer graphene is a oneatom- thick planar sheet of carbon atoms that are packed in a dense honeycomb crystal lattice. Using AFM, the graphene layer thickness has been measured by several investigators to be in the range of 0.35–1 nm [26,27]. Similarly, graphene platelet thicknesses of ~0.6 nm and 1.0 - 1.6 nm have been measured by Park & Ruoff [17] and Novoselov et al. [6], respectively. Since the thickness of one single-layer graphene has a topographic height of ~0.335 nm, it follows that there are ~3, 7, and 9 graphene layers in samples G1, G2, and G3, respectively. 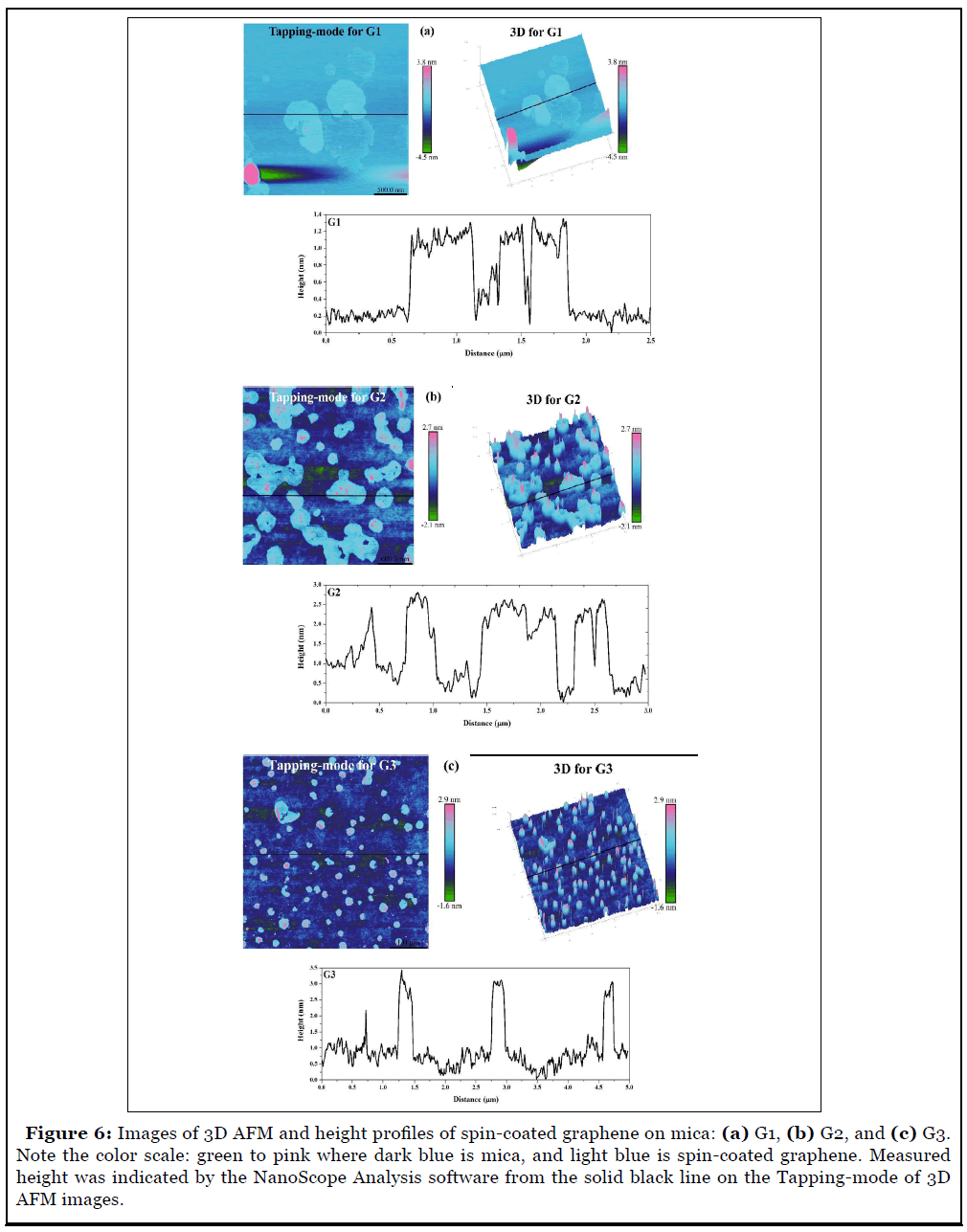 The above-mentioned results of AFM and XRD imply that the sonication process and the subsequent spin-coating can break down the initial graphene nanoplatelets with 75-102 layers down to 3-9 layers via further exfoliation.

Graphene is a superior allotrope of carbon with a 2-D monolayered sheet network of sp2 hybridized carbon. A suite of standard characterization techniques was used to elucidate the nanostructures of graphene. Based on the results of SEM, Raman, XRD, and AFM analyses, it can be concluded that multilayered nanoplatelets are present in graphene samples G1-G3 with 75-102 layers. However, through a combination of sonication and spin-coating, these relatively thick nanoplatelets could be further broken down into thinner graphene films of 3-9 layers.

Prof. Mohindar Seehra of West Virginia University and Prof. Andrea Ferrari of Cambridge University kindly provided feedback on XRD and Raman results, respectively. The authors would like to thank Dr. Thomas Becker from Curtin University for assistance with the AFM measurements.