Copyright: © 2020 Lazar I, et al. This is an open-access article distributed under the terms of the Creative Commons Attribution License, which permits unrestricted use, distribution, and reproduction in any medium, provided the original author and source are credited.

Cancer/testis antigens (CTA) are tumor antigens whose expression is normally restricted to the testis. More than half of CTA genes are located on the X chromosome and form a branch called X-CTA [1]. Unlike the remaining CTA genes located throughout the genome, multigene X-CTA families are present as clusters on the X chromosome. Among them, the Sperm Protein Associated with the Nucleus on the X chromosome (SPANX) family is composed by five members [SPANX-A1, -A2 (-A1 and -A2 being two copies of the same gene), -B1, -C and -D]. As SPANX proteins are highly homologous and cannot be distinguished by antibody-based techniques, unless stated otherwise, hereafter we will use the term “SPANX” to refer to these five proteins. SPANX proteins are expressed post-meiosis in round and elongating spermatids [2], and their expression positively correlates with male fertility measured by pregnancy rate [3]. SPANX function in spermatids and spermatozoa is poorly characterized. However, cell fractionation analysis revealed that SPANX is abnormally distributed in samples with low spermatozoa motility [4] suggesting that SPANX is related to this process. Furthermore, identification of SPANX partners in spermatozoa has revealed proteins functioning in nuclear organization, mitochondrial metabolism and flagellar motility [5]. The discovery that SPANX genes are expressed in tumor cells was reported in a search for metastasis-specific genes in the melanoma line 1F6m, a metastatic variant of the parental 1F6 line [6]. Since then, SPANX gene expression has been observed in numerous malignancies, including breast cancer and hematological malignancies, as well as melanoma [6,7].

It remains unclear what regulates SPANX expression in non-testis tissues. Unlike control elements of other X-CTA genes such as MAGE-A1 [8], SPANX promoters do not contain CpG islands, [7] suggesting they are not regulated by DNA methylation. SPANX expression, however, appears to be tightly controlled, as within a single cell line it is expressed in only a subset of cells [9]. Our preliminary observations suggest that this heterogeneity is not due to variations in cell cycling (our unpublished data). Similar outcomes have been observed in spermatozoa in which only 50% of cells express SPANX, independently of the presence of the X or Y chromosome. As seen in melanoma patients, heterogeneous SPANX expression within a tumor could be a marker of dormancy or stemness [9]. In agreement with this hypothesis, SPANX promoters harbor a binding site for the transcription factor SRY (Sexdetermining region Y protein) [7], whose activity is linked to stemness in a hepatocellular carcinoma model [10].

The fact that SPANX is expressed in a metastatic melanoma cell line suggests that it functions in metastasis. In support of this hypothesis, SPANX silencing in the SUM159T breast cancer line decreased cell invasivity into a Matrigel/collagen matrix and lung metastasis when injected into the mammary fat pad of NOD/SCID mice [11]. In addition, SPANX expression is inversely correlated with metastasis-free survival of breast cancer patients, in particular those with the ER-negative subtype [11]. Intriguingly, in melanoma, although SPANX expression positively correlates with tumor stage in a small cohort of patients [12], we only observed a positive effect of SPANX on migration of NRAS-mutant WM1366 cells but not in the BRAF mutant cell line A375 [9]. This observation raises the possibility that the effect of SPANX on cell migration and metastasis is genotype-dependent. Also, in a lung cancer model, SPANXA overexpression blocks the metastatic process by inhibiting the epithelial-tomesenchymal transition and cell invasion [13]. These apparently contradictory results could be explained by context-dependent differences in SPANX activity depending on tumor type and genetic background.

Although SPANX expression has a minor effect on cell proliferation in a breast cancer model [11], silencing SPANX significantly inhibits melanoma cell proliferation by inducing senescence [9] and cell death, depending on the degree of knock-down (our unpublished observations). These phenotypes are linked to the organization of a SPANX interaction partner, LMNA. LMNA encodes the type V intermediate filament proteins lamin A and C. Lamins are major components of the complex meshwork lamina underlying the inner nuclear membrane, which controls processes such as nuclear shape and integrity or chromatin organization [14]. LMNA is also found within the nuclear space where it regulates gene expression and DNA repair, among other functions [14]. Disruption of LMNA function induces a constellation of diseases known as laminopathies, which differ depending on the mutation site on LMNA gene [15]. At the cellular level, laminopathic cells display abnormally-shaped nuclei and the presence of nuclear blebs and micronuclei, phenotypes resembling those seen following SPANX silencing. Consistent with the fact that SPANX proteins exhibit disulfide bridges and are multimeric [2], super-resolution microscopy has revealed SPANX protein present in filament-like structures [9], either due to interaction with filament proteins or formation of a SPANX filament itself that could serve as a LMNA scaffold. This latter possibility, which requires further investigation, could explain why LMNA is abnormally-structured after SPANX silencing in melanoma cells [9].

SPANX interacts with the LMNA Ig-fold domain, which functions in protein/protein interaction [9,16] and is a mutation hot spot in laminopathies [15]. Thus, we speculated that SPANX may regulate LMNA interaction with other proteins and control their availability. This idea was partially supported in the case of PCNA (Proliferating Cell Nuclear Antigen), which functions in DNA replication, and whose interaction with the lamin Ig-fold domain inhibits its availability to chromatin [17]. To confirm this finding, we defined the LMNA interactome following SPANX silencing. Our preliminary observations indicate that SPANX proteins control interaction of LMNA with some of its partners (Figure 1A). Strikingly, most of those partners are upregulated in the LMNA interactome upon SPANX KD, suggesting that SPANX inhibits their interaction with LMNA. One protein showing the highest level of deregulated interaction with LMNA following SPANX silencing is BANF1 (barrier-to-autointegration factor, also known as BAF) (Figure 1A). BANF1 has several nuclear functions, including regulating chromatin organization and nuclear assembly [18], and BANF1 loss decreases cell survival as it is required to reshape the nucleus as a single entity at mitotic exit by cross-bridging distant chromosomes [19]. BANF1 forms a tripartite complex with LMNA and EMD (emerin), and interaction of the latter with LMNA is also altered by SPANX silencing (Figure 1A). EMD is a critical nuclear envelope protein functioning in mechanotransduction [20] or chromatin tethering at the nuclear envelope [21]. EMD mutations cause EDMD (Emery-Dreifuss muscular dystrophy), as do LMNA mutations [22]. Together with LMNA and EMD, BANF1 controls mitotic spindle assembly and positioning [23] and chromosome segregation [24,25]. Furthermore, BANF1 controls LMNA and EMD localization to mitotic chromosomes and formation of the nuclear envelope [26]. 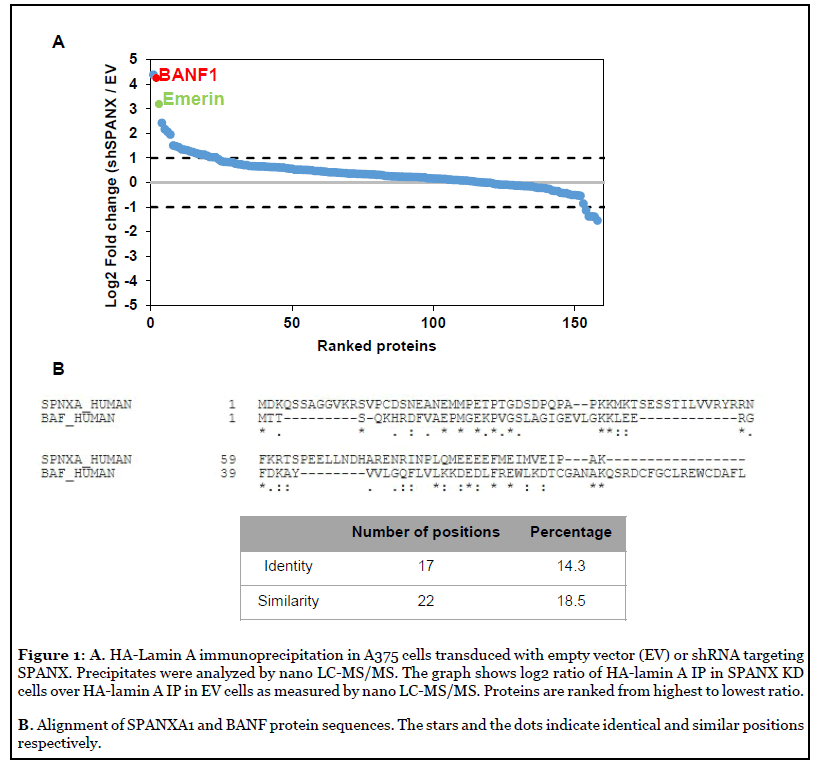 Interestingly, BANF1 interaction with LMNA occurs via the LMNA Ig-fold domain, and disruption of this interaction is associated with laminopathies [27]. BANF1 also shares 14.3% and 18.5% amino acid identity and similarity respectively with SPANX (Figure 1B). It is tempting to speculate that in tumor cells, SPANX and BANF1 compete for LMNA Ig-fold domain interaction, and thus SPANX expression could increase the available pool of BANF1. Indeed, changes in BANF1 availability could largely explain phenotypes induced by SPANX silencing as manipulation of either SPANX or BANF1 has similar effects, such as inhibition of cell proliferation, induction of cell death, and increased levels of cytosolic DNA [9,19]. Therefore, expression of SPANX, which is normally restricted to the testis, could provide an advantage to tumor cells by regulating availability of proteins functioning in nuclear organization and cell division.

Following SPANX depletion and subsequent LMNA deregulation, melanoma cells exhibit increased numbers of micronuclei [9]. Cytosolic chromatin is reportedly detected by DNA sensors such as cGAS, which then activate the NFκB pathway and IRF3 [28]. While IRF3 induces transcription of type I interferon genes and promotes cell death independently of its transcriptional activity [29], the NFκB pathway promotes senescence by controlling expression of inflammatory cytokines [30], including IL1A [31]. Our data show that IRF3 might also play a role in inducing senescence, at least in part by controlling IL1A transcription and modulating an autocrine/paracrine regulatory loop that decreases proliferation. However, upon viral infection, IRF3 and RELA can cooperate to induce target gene transcription [32]. These data suggest that NFκB signaling functions in SPANX-induced phenotypes, a possibility to be determined.

IRF3 activation is an important cell intrinsic mechanism to engage potential innate immune responses [28]. Thus, IRF3 activation following SPANX loss raises questions related to the consequences of SPANX expression on the immune microenvironment. SPANX silencing in melanoma cells leads to increased HLA gene expression, a change consistent with IRF3 activation [28,33]. SPANX expression by tumor cells might therefore protect them against anti-tumor immunity. Accordingly, DNA-sensing pathways synergize with anti-CTLA4 treatment in a mouse melanoma model [34]. However, the consequences of activating these pathways on tumor progression are difficult to predict as chromosome instability is a known driver of metastasis in a cytosolic DNA responsedependent manner [35]. However, given that SPANX is a tumor antigen [7], its presence might provoke anti-tumor immune responses. Correspondingly, SPANXB1 protein is sufficient to induce tumor cell killing in vitro by peripheral blood CD4+ T cells stimulated with autologous dendritic cells [36].

Finally, some phenotypes seen in SPANX knockdown melanoma cells resemble those observed in LMNAmutant laminopathic cells. In both cases, cells exhibit nuclear abnormalities, such as blebs and micronuclei, which lead to decreased proliferation and senescence [9,15]. Recently, activation of the cGAS/STING pathway and of downstream proteins such as IRF3 was reported in laminopathic cells, and blocking STAT1, a downstream effector of cGAS/STING signaling, rescued proliferation defects induced by LMNA mutation [37]. Considering that laminopathic cells show IRF3 activation [37] and IL1A upregulation [38], the IRF3/IL1A axis may play a role in this disease. Understanding these mechanisms could provide new therapeutic opportunities, such as IL1Ablocking antibodies, for laminopathic patients.

In conclusion, the SPANX proteins control LMNA structure, nuclear integrity and cell proliferation, although future studies should address the precise molecular mechanisms involved [9]. As suggested by our LMNA interactome, an attractive hypothesis is that SPANX regulates interaction between LMNA and proteins that participate in chromatin organization and nuclear integrity. Confirmation of these mechanisms could lead to development of small molecules or peptides disrupting the SPANX/LMNA interaction, which could block tumor cell growth and proliferation and provide new therapeutic opportunities for cancer patients.

We thank Pr Z. A. Ronai for useful discussions. I.L. was supported by a Rubenstein Family Post-Doctorate fellowship at the Technion and B.F. is a long term EMBO fellow (ALTF 1204-2015) cofounded by Marie Curie Actions (LTFCOFUND2013, GA-2013-609409) and is supported by a postdoctoral fellowship from the Fondation ARC pour la recherche sur le cancer.