Copyright: © 2021 Chandra K, et al. This is an open-access article distributed under the terms of the Creative Commons Attribution License, which permits unrestricted use, distribution, and reproduction in any medium, provided the original author and source are credited.

Type 2 diabetes mellitus (T2DM) is a metabolic dysfunction characterized by elevated levels of blood glucose as well as impaired lipid and protein metabolism [1,2]. The mobilization of fatty acids is augmented in insulin resistance due to the failure of lipolysis inhibition by the hormone that further augments the increase in plasma NEFA levels. This in turn, results in inflammation as well as further insulin resistance [3]. The complementation of insulin resistance with dysfunction of pancreatic islet β-cells leads to hyperglycemia. Insulin resistance may persist unnoticed for several years prior to onset of T2DM. Insulin inhibits lipolysis of stored fat in adipose tissue and gluconeogenesis in liver. It also increases the synthesis of proteins needed for the optimal cellular function, repair, growth, and stimulates the translocation of the GLUT-4 protein leading to increased transport of glucose into the muscle cells [4]. Insulin resistance is a metabolic dysfunction that is often mediated by increased inflammation.

Current Knowledge in the Association of NEFA in T2DM

Various dietary fatty acids, especially omega-6 and saturated fatty acids (particularly arachidonic acid and palmitic acid) can be pro-inflammatory molecules that play a pivotal role in diet-induced inflammation. Omega-3 fatty acids (especially eicosapentaenoic acid and docosahexaenoic acid) on the other hand, can be anti-inflammatory molecules [5]. Several studies have postulated that high-fat diet causes insulin resistance and consumption of saturated fatty acids induces hyperlipidemia and obesity, leading to progression of diabetic complications. It is also stated that polyunsaturated fatty acids improve the diabetic complications [6,7]. Moreover, several studies have suggested that the composition and concentration of plasma free fatty acids (FFAs) are associated with insulin sensitivity [8]. Adipose tissue not only store and release FFAs but also secrete a number of inflammatory markers [9]. The mechanism of insulin resistance due to FFAs is not very clear, though it may include FFA facilitated generation of reactive oxygen species (ROS) and activation of the Toll-like receptor 4 (TLR-4) pathway [10] or endoplasmic reticulum stress [11].

In this commentary, we have reviewed the plasma FFA levels in human subjects at different glycation levels and investigated their relationship in T2DM patients. A few studies are available on the distribution/mobilization of plasma fatty acids in T2DM patients. These have been summarized in Table 1. The most common pattern jointly observed in T2DM patients in all the studies is the elevation in saturated FFAs, particularly palmitic acid and stearic acid. The evidence related to other saturated FFAs are not conclusive. Saturated fatty acids not only serve as the main energy source as nutrient, but also act as signaling molecules in various cellular processes. The chronic increase in levels of these fatty acids in plasma is the major contributor for lipotoxicity leading to complications in T2DM patients [12,13]. Most of the studies have shown that the level of oleic acid (C18:1) is increased in T2DM patients. Our group has analyzed the plasma fatty acids levels at different levels of glycations (Groups HbA1c <6%, 6-7%, 7.1-9%, 9.1-12% and >12%). In contrary, in our study, the levels of oleic acid were significantly decreased in patients with increased levels of glycation (HbA1c 6-15%) [14]. Further, no uniformity in the pattern of ω6 fatty acids (linoleic acid) level in T2DM patients was observed.

Oleic acid and palmitic acid are the most abundant dietary as well as plasma fatty acids and represent 31% and 27%, respectively, of total plasma non-esterified fatty acids [21].

A preclinical study showed that increased level of plasma palmitic acid induced the inflammation and also the insulin resistance. The studies on plasma fatty acids (summarized in Table 1), have revealed that the level of palmitic acid is significantly elevated in T2DM patients. Three main mechanisms have been postulated to explain palmitic acid-mediated insulin resistance (Figure 1): i) Increased synthesis of deleterious complex lipids (DAG/ ceramide); ii) Impaired function of cellular organelles, and iii) Receptor-mediated inflammation. Increased internalization of palmitic acid exceeds oxidative requirements and spills over into harmful nonoxidative metabolic pathways resulting in increased levels of diacylglycerol (DAG) and ceramide. Elevated levels of DAG activate protein kinase C (PKC), which down regulates the insulin signaling pathway. Besides, it phosphorylates insulin receptor substrate (IRS)-1 at serine residues and also stimulates the inhibitor of nuclear factor (NF)-kB (IkB) kinase (IKK)b–NF-kB pathway, thus further aggravating the impairment of insulin signaling and inciting inflammation [22]. The increased level of ceramide, on the other hand, triggers the nod like receptor containing a pyrin domain (NLRP3) inflammasome that facilitates the release of interleukin (IL)-1β. It also leads to the activation of protein phosphatase 2A (PP2A) and PKC, which both attenuate the insulin signaling pathway [23]. The increased level of palmitic acid impairs the function of the endoplasmic reticulum (ER) and mitochondria, which leads to the ER stress that in turn promotes inflammation. The impairment of mitochondrial function may also reduce fatty acid oxidation and increase ROS generation [24]. Moreover, palmitic acid can also stimulate TLR- 4 through fetuin-A and lipopolysaccharides (LPS) leading to an increase in the activity of the IKKb–NF-kB pathway [25]. However, the study reported that oleic acid supplementation improved insulin sensitivity in human subjects and reduced the effect of palmitic acid [26]. 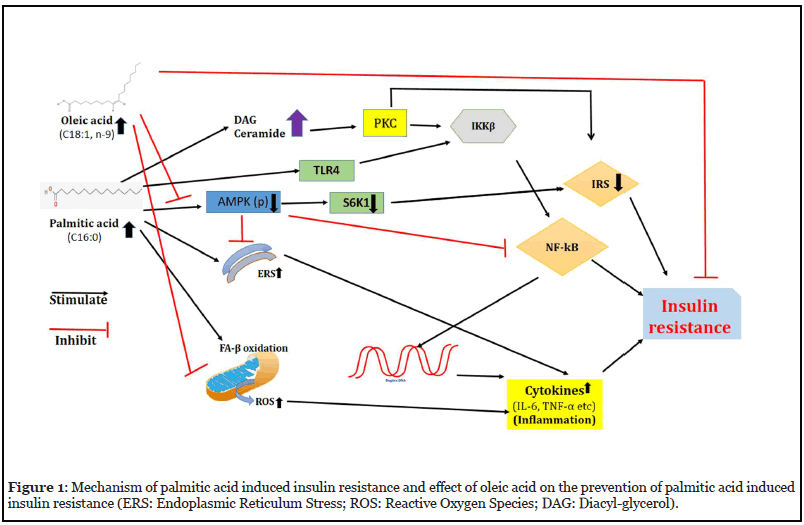 The beneficial effect of oleic acid on palmitic acidinduced insulin resistance is dependent on the AMPactivated protein kinase (AMPK), a metabolic sensor that also modulates inflammation and has been implicated as one of the therapeutic targets for diabetes [27]. Oleic acid prevents the harmful effects of palmitic acid by increasing the mitochondrial oxidation of saturated fatty acids and stimulating their accumulation in form of triacylglycerol, thus reducing the synthesis of diacylglycerol (DAG) and ceramide. The surge in fatty acid oxidation triggered by oleic acid is mediated by the restoration of AMPK activity. Oleic acid prevents the reduction in AMPK activity caused by palmitic acid and eventually inhibits endoplasmic reticulum stress and inflammation [28]. Endoplasmic reticulum stress is possibly a novel mechanism involved in inter-relation between saturated NEFA induced inflammation and insulin resistance. Palmitic acid induces the synthesis of the ER stress-induced pseudokinase, Tribbles 3 (TRB3). It is a pseudokinase, which contains a kinase domain without the enzymatic activity and is responsible for entirely different metabolic functions. However, oleic acid prevents the increase in the levels of TRB3 pseudokinase. Besides, oleic acid also reduces ROS generation and protects mitochondria from palmitic acid-induced oxidative stress. The number of studies (summarized in Table 1) have shown that the oleic acid level is significantly increased in T2DM patients, hence the data need to be further validated.

The mobilization of fatty acids plays a key role in insulin resistance and lifestyle disorders. Hence, accurate and robust analytical methods are essential for explicating the mechanism of fatty acid mediated pathophysiology in disease conditions. There is a need for establishing the plasma fatty acid reference range of healthy subjects so that the changes in fatty acids in disease condition(s) could be determined. An interesting study conducted in Canadian population showed that the reference range of palmitic acid, stearic acid, oleic acid, linoleic acid, α-linolenic acid and docosahexaenoic acid in healthy subjects is 0.3 to 4.1 mmol/L, 0.1 to 1.0 mmol/L, 0.03 to 3.2 mmol/L, 0.2 to 5.0 mmol/L, 12.0 to 186.9 μmol/L, and 7.2 to 237.5 μmol/L, respectively [29]. In Indian population, no such study has been reported. Gas Chromatography—Mass Spectrometry (GC-MS) is the widely used method for the fatty acid measurements in plasma. However, it requires sophisticated GC-MS equipment for the analysis that limits its use in clinics. Further, in GC-MS analysis, a lot of noise is also present. This necessitates to have larger sample size for the analysis of fatty acids and their validation by using different levels of quality control. It will be a great achievement for scientific community to validate clinically or therapeutically, one or two specific fatty acid(s) in pathophysiology of T2DM.

The present commentary provides the existing status of evidence on T2DM related changes in plasma fatty acids and their possible mechanism for causing harmful effects.

No potential conflicts of interest were disclosed.