Copyright © 2022 Besen E, et al. This is an open-access article distributed under the terms of the Creative Commons Attribution License, which permits unrestricted use, distribution, and reproduction in any medium, provided the original author and source are credited.

Introduction: Pediatric hearing loss, as well as other diseases, is screenable in newborns. In Brazil, its incidence is 30:10,000 live births. Risk indicators for hearing loss include infectious diseases, which have been a major concern in primary healthcare in recent years. Objective: To verify associations between infectious diseases and neonatal hearing screening (NHS) failures, as well as adjustments to other confounding sociodemographic variables. Methods: Retrospective study in newborns submitted to NHS at public maternity hospitals in greater Florianópolis, Brazil, between January 2017 and December 2021, using primary healthcare data from the Brazilian Public Health Network. Raw and adjusted odds ratio (OR) were estimated with MedCalc® software, v. 20.027. Logistic regression analysis, raw OR calculations, Cochran–Mantel–Haenszel OR calculations, and chi-square test were conducted to estimate associations between congenital syphilis and NHS failure, both including and excluding the confounding variables. Results: Altogether, 34,801 newborns participated in the research, of whom 1.13% (392) failed the NHS. Most mothers were 20 to 29 years old (53.18%), and infectious diseases were present in 956 newborns (2.75%). The OR for NHS failure in patients with congenital syphilis was 4.50 (95% CI: 3.25-6.24) before adjustments, and 4.73 (95% CI: 3.02-7.41) after adjustments for the year of birth, age, ICU stay, and prematurity. The Cochran–Mantel–Haenszel OR remained high after adjustments for these variables, resulting respectively in 4.39 (3.15-6.10), 4.17 (2.96-5.87), 4.59 (3.31-6.37), and 4.73 (3.41-6.55). Conclusion: Infectious diseases were associated with NHS failure. Prenatal care, NHS, and puerperium should be given greater importance so these two conditions can be both prevented and detected in newborns.

Hearing loss is defined as an important decrease in the capacity to perceive speech and environmental sounds. However, if detected early, patients may be less impaired by this dysfunction [4]. To this end, Federal Law no. 12.303 made the universal neonatal hearing screening (UNHS) mandatory in Brazil in 2010 [5]. It is performed with evoked otoacoustic emissions (EOAE) and automated auditory brainstem response (A-ABR) [4], following scientific institution protocols by the Joint Committee on Infant Hearing (JCIH) (2007, 2019) [6,7] and restated by the Multiprofessional Committee on Hearing Health (COMUSA, in Portuguese) [8] and the NHS Attention Guidelines [4].

Studies point out that congenital infections are risk indicators for hearing loss (RIHL). The JCIH began defining RIHL in the 1970s (2007) [6] to identify newborns more susceptible to having hearing loss. In Santa Catarina, Brazil, 277 cases of congenital syphilis were reported in 2014, and 700, in 2017, indicating a 153% increase between those years [9]. In Florianópolis (the capital of Santa Catarina), 129 cases were reported between 2016 and 2017 [10].

Given the above, the main objective of his research was to construct association models employing logistic regression and Cochran–Mantel–Haenszel odds ratio (OR) calculation to assess the strength of association between infectious diseases in newborns and NHS, minimizing interferences from confounding variables (mother’s age, year of birth, ICU stay, and prematurity) in primary healthcare at an NHS reference service of the Unified Health System (SUS, in Portuguese) in the state of Santa Catarina.

This is a historic (retrospective) cohort study analyzing data from newborns submitted to UNHS at two maternity hospitals in Santa Catarina between January 2017 and December 2021. Secondary data furnished by a reference hearing health service were surveyed and analyzed.

UNHS was conducted while newborns were in maternity ward stay or intermediate care. They were assessed with transient evoked otoacoustic emissions (TEOAE) in both ears, recorded separately; when necessary, A-ABR was performed. If, however, the result was unsatisfactory, the auditory monitoring referral protocol of the state of Santa Catarina was followed [11].

NHS, categorized into “pass” or “fail”, was addressed as a variable. Newborns who failed the TEOAE and/or A-ABR in one or both ears were considered “fail”.

The data were organized in Microsoft Excel® spreadsheets and then exported to and analyzed in MedCalc® Statistical Software, version 20.027 [12]. The categorical variables were described in absolute and relative frequencies, with their respective 95% confidence intervals (95% CI). An association analysis was made with the chi-square test between the outcome (NHS) and the main exposure variable (congenital syphilis) and covariables. Whenever possible, the chi-square was also used to assess trends (mother’s age and year of birth). In raw (bivariate) and adjusted analyses, the OR was used as an association measure; it was estimated with logistic regression analysis and 2x2 table analysis (raw OR), or with the Cochran–Mantel–Haenszel test. The main exposure variable was adjusted for all study variables, regardless of the p-value. The variables were simultaneously included in the adjusted analysis, following the statistical method of a previous study [13]. Statistically significant associations were admitted only when their odds of occurrence were equal to or lower than 0.05 (i.e., p ≤ 5%).

This study was approved by the Research Ethics Committee of the Federal University of Santa Catarina under CAAE no. 39562720.8.0000.0121. All parents/guardians signed an informed consent form.

NHS failures occurred more frequently in newborns whose mothers were ≤ 19 years old than in the other categories, with a statistically significant difference (p < 0.0001). Also, there was a greater proportion of failures in newborns with infectious diseases than without them (p < 0.0001) (Table 2).

95% CI: 95% confidence interval. *Obtained with logistic regression and adjusted with all study variables; model 1: including all new- borns, model 2: excluding all newborns who stayed in ICU and/or were premature.

The adjusted OR obtained with Cochran–Mantel-Haenszel test considering the confounding variables are shown in Table 4. Their values ranged from 3.58 to 4.15, with overlapping values in all their 95% CI, indicating a clear and robust association between the newborns’ NHS failure and congenital syphilis. The OR for the various situations is presented in Figure 1. 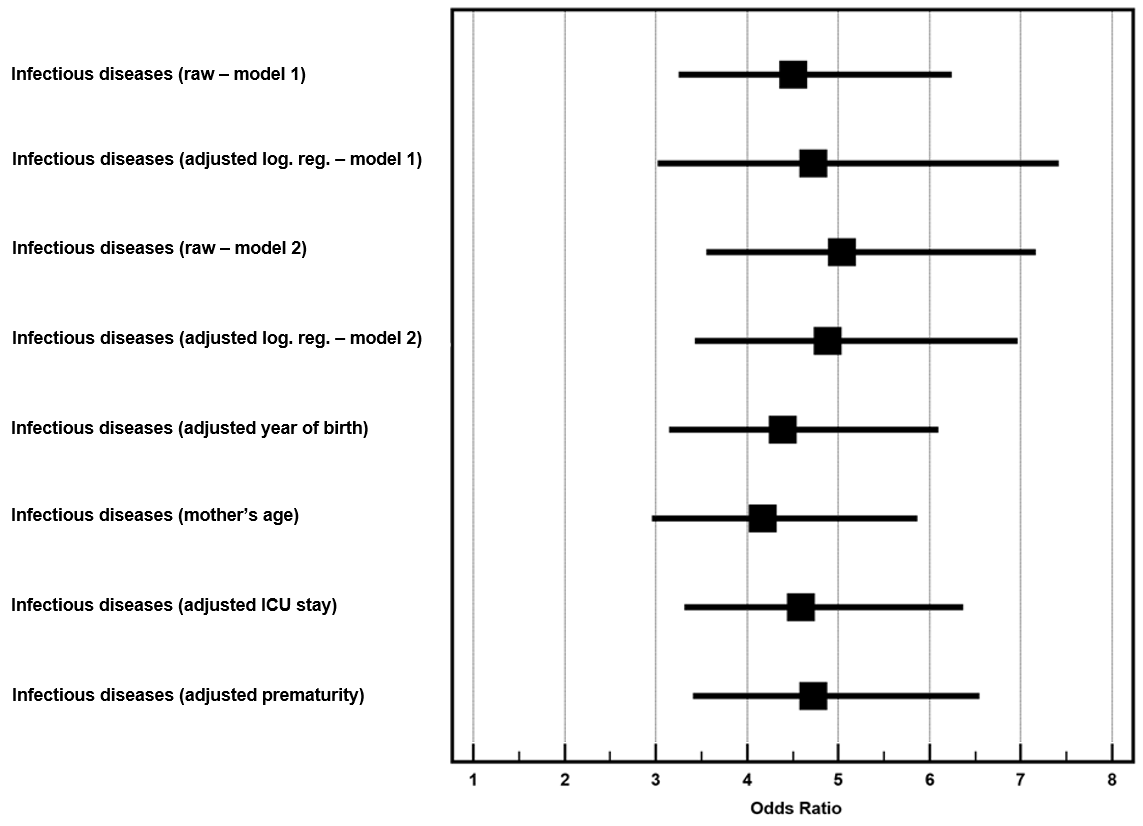 Figure 1: Forest plot of the odds ratios (raw, adjusted with logistic regression, and adjusted Cochran–Mantel–Haenszel odds ratio) of the association between failures in the neonatal hearing screening and infectious diseases adjusted for possible confounding variables. Florianópolis, SC, 2017 to 2021.

A total of 392 (1.13%) newborns failed the NHS, while 552 (1.6%) were diagnosed with congenital syphilis. In the final adjusted analysis, newborns with congenital syphilis were 3.7 times more likely to fail the NHS than those without syphilis (95% CI: 2.01; 5.26). Before the Unified Health System was established, the Brazilian epidemiological profile was characterized by a high incidence of mortality from communicable diseases and rural endemics, with limited surveillance, prevention, and control measures. After the 1980s, such measures were reorganized and universalized through the National Health Surveillance System in cooperation with the other fields of the healthcare network. Thus, vaccines and treatment were universally provided free of charge to the population [14].

The National Program for Humanized Prenatal Care and Birth (PHPN, in Portuguese), launched in 2000 by the Ministry of Health, proposes indicator criteria for prenatal care performance and quality and financial incentives to the municipalities that adhered to the program [15]. In 2011, the Ministry of Health implemented the Stork Network to complement PHPN and provide a new healthcare model for mothers and children, from birth to 24 months old, ensuring accessibility, support, and solutions and decreasing mother and child mortality rates [16]. Worldwide estimates indicate that approximately one million pregnant women are infected with syphilis per year. In Brazil, congenital syphilis remains a major public health problem [17] – in 2009, its incidence rate was 2.1:1000 live births, which increasingly progressed to 9:1000 live births in 2018, decreasing back to 8.2:1000 live births in 2019 [9].

Communicable diseases, even if asymptomatic, may cause early or late sensorineural hearing loss in newborns [18]. Such losses interfere with their social and emotional life and impair their linguistic and cognitive development. Auditory monitoring follows up on behavioral and linguistic development inherent to auditory skills and auditory pathway maturation. Thus, it minimizes the impact on auditory and linguistic development, benefitting from the period of neuronal plasticity when adequate treatment is conducted [19].

The absence of race, educational attainment, and family background as variables in this research may be considered limitations. However, these data were not available in the newborns’ medical records. Therefore, associations between these variables and possible NHS failures could not be verified. It is suggested that services include these and other data in the medical records to ensure that health professionals have access to more comprehensive information.

Early hearing loss identification and detection with NHS is a key tool for child follow-up, encompassing all healthcare levels. Therefore, the Family Health Strategy must incorporate the initial flow for longitudinal follow-up [22].

Knowing the multidimensional aspects of health in the various life cycles is a comprehensive care strategy. The aim is to learn the population's health profile, needs, and vulnerability issues, especially regarding the existing policies and services. Some elements must be considered when interpreting the results of this study. The logistic regression design in this research directly estimates the odds of the occurrence of an event. However, it is not possible to infer changes that occurred over time or ensure the causality of actions. Unavailable information on the mother’s educational attainment and race can be considered a limitation, as these could have provided a more in-depth data analysis.

In conclusion, infectious diseases were associated with NHS failure. To reach an early diagnosis and intervention, there must be investments in public policies for primary healthcare, aiming to strengthen and give greater importance to prenatal care and hearing screening.

In the peripheral nervous system (PNS), Schwann cells (SCs) are responsible for myelin production, which contributes to axonal protection and allows for efficient action potential transmission. Unfortunately, acquired and hereditary demyelinating diseases of the PNS are numerous and affect an increasing number of people.

In the peripheral nervous system (PNS), Schwann cells (SCs) are responsible for myelin production, which contributes to axonal protection and allows for efficient action potential transmission. Unfortunately, acquired and hereditary demyelinating diseases of the PNS are numerous and affect an increasing number of people.

Perinatal brain injury is an important clinical and socioeconomic entity. It is a syndrome of impaired brain function in the early days of life, and it is a consequence of inadequate brain oxygenation before, during or shortly after birth, with high mortality rates and early and late morbidity rates.