Copyright © 2021 Zemo GF, et al. This is an open-access article distributed under the terms of the Creative Commons Attribution License, which permits unrestricted use, distribution, and reproduction in any medium, provided the original author and source are credited.

Background: Recently, we reported estrogen-like and anxiolytic effects of the decoction of Khaya anthotheca in ovariectomized rats. Rationale: The purpose of the present study was to assess the putative neuroprotective properties of the plant in ovariectomized rats. Methods: Thirty female Wistar rats were ovariectomized, while 6 were used as sham. After 14 days of endogenous hormonal decline, animals were randomly divided into six groups (n=6) and administered with distilled water, K. anthotheca decoction (125, 250 and 500 mg/kg doses) or estradiol valerate (1 mg/kg) for 28 days. Phytochemical analysis and antioxidant potential of the decoction were determined. Levels of oxidative stress biomarkers were determined in brain homogenates, while histopathological analysis was performed on brain sections, and expressions of neuroinflammation markers determined. Results: Polyphenols were detected in K. anthotheca, and the ferric reducing antioxidant power (FRAP) assay revealed antioxidant properties (635.50 ± 0.58 mg eq quercetin/g of dried decoction). Treatment with K. anthotheca decoction reduced MDA and increased GSH levels in brain homogenates (p<0.01). As estradiol valerate, the decoction, prevented neurodegeneration observed in cortices and hippocampi of untreated ovariectomized animals. Conclusions: Our results suggested that K. anthotheca is endowed with neuroprotective effects and warrant further studies, including other models of neurodegeneration and dementia.

The cortex, hippocampus, and amygdala are among the brain regions where estrogens may act to improve cognition, memory and mood. In these regions, estrogens have many beneficial effects, including neuroprotection, neurogenesis, as well as neurotrophic, antioxidant, and anti-inflammatory effects [1-2]. Estrogenic compounds induce these effects partly by decreasing the activity of activated brain macrophages [2-3]. These beneficial effects are lost at the menopause, as estrogen production stops. Unsurprisingly, estrogen depletion at the menopause was reported to associate with cognitive decline, depression, and anxiety [4], but also with several systemic detrimental alterations, including changes in plasmatic lipid fractions and enhanced oxidative activity [5-6].

In laboratory rodents, experimental menopause induced by ovariectomy is accompanied by oxidative damage in the brain [7]. Oxidative stress emerges due to the failure of the antioxidant defense mechanisms that are estrogendependent [8]. Oxidative stress is a hallmark of central nervous system diseases, particularly mood disorders and neurodegenerative diseases [9]. The impaired oxidant/ antioxidant profile observed in menopause can be reversed by dietary polyphenols, underlining the potential benefits of these natural antioxidants [10-11]. Moreover, medicinal plants are a source of a wide variety of natural products with antioxidant properties [12-13].

Khaya anthotheca (Welw.) C.DC is a plant of Meliaceae family used in African traditional medicine to treat diseases helmenthiasis, malaria, gonorrhea, abdominal pain and migraine [14-15]. The Khaya genus is also used for the treatment of convulsion, fever, cough, stomach ache, rheumatism and dermatomycosis [16]. In Cameroon traditional medicine, the aqueous extract of Khaya anthotheca is empirically used to manage anxiety and to alleviate vaginal dryness in postmenopausal women [17]. We reported recently that K. anthotheca decoction displayed estrogen-like and anxiolytic effects following acute treatment [17] and ameliorate negative effects of vanadium inducing anxiety, memory loss and pathologies in the brain and ovary of mice [18]. To our knowledge, no study addressed the neuroprotective potential of K. anthotheca on menopausal model, despite the potent estrogen-like properties of this medicinal plant. Thus, in the present study we assessed the neuroprotective effects of K. anthotheca in ovariectomy-induced neurodegeneration context.

Juvenile female Wistar rats (10-12 weeks old, 150 ± 10 g, n=36) were used in this study. Most animals were ovariectomized (n=30) while the remainder (n=6) were processed as Sham. T rats were bilaterally ovariectomized using the dorsal approach [19] under diazepam and ketamine anesthesia (10mg/kg and 50mg/kg BW; i.p., respectively). The animals were housed in an environmentally controlled room (temperature 25°C; humidity 50-80%; 12 h light–dark cycle). They had free access to a standard soy-free rat diet (SSniff GmbH, Soest, Germany) and had ad libitum access to tap water.

All procedures were performed in accordance with the European Community Guidelines for Laboratory Animal Use and Care (EEC Directive of 1986; 86/609/EEC).

All treatments were administered orally (2 mL/100 g). Body weight was determined weekly for 4-weeks. After 28-days of treatment, rats were fasted overnight (10–12h), then sacrificed under deep anesthesia (10 mg/kg BW diazepam and 50 mg/ kg BW ketamine, i.p.). Brain was dissected out and weighed. Left hemispheres were processed for preparing homogenates. Right hemispheres were fixed in 10% formaldehyde and processed for histopathological studies.

Samples of stem bark of K. anthotheca were collected in Mamougnam (District of Massangam, Noun Department, Cameroun) with the help of experts. The botanical samples were further identified at the National Herbarium of Cameroon (HNC) by comparing to available specimens and stored (voucher number 4230/HNC). The decoction was prepared as described previously [17].

Concentrations of various potentially bioactive phytochemicals, such as polyphenols and flavonoids were measured according to the methods described by Singelton et al. [20] and Zhishen et al. [21], respectively. The antioxidant potential of the decoction was determined using the ferric reducing antioxidant power (FRAP) assay [22]. The tests were performed in triplicates (three-independent experiments).

Left hemispheres were processed to prepare homogenates (10% w/v in 0.1 M phosphate buffer, pH 7.4). The supernatant was collected after centrifugation and was used to estimate lipid peroxidation and reduced glutathione levels based on the estimation of their markers (MDA and GSH, respectively), according to methods described by Ohkawa et al. [23] and Ellman [24], respectively.

Polyphenols were present in K. anthotheca, including flavonoids. The concentrations of these compounds are depicted in Table 1. The antioxidant activity of the extract was confirmed by the FRAP assay, which revealed a total antioxidant potential of 635.50 ± 0.58 mg eq quercetin/g of dried decoction (Table 1).

Data are mean ± SEM of triplicates from at least three-independent experiments.

Table 2 depicts the effects of K. anthotheca treatment on MDA and GSH levels in brain homogenates. Increases in MDA (p<0.01) and decreases in GSH (p<0.05) levels were observed in OVX group compared to NOVX group. Compared to OVX group, rats treated with K. anthotheca decoction showed a significant reduction in MDA levels at all tested doses (p<0.05). Significant increases in GSH levels were observed only at the highest doses tested (250 mg/Kg, p<0.05; and 500 mg/Kg, p<0.01).

Table 2: Oxidative stress status in whole brain after a 28-days of treatment with the aqueous extract of stem bark of Khaya anthotheca in ovariectomized Wistar rats.

Effect of Khaya anthotheca on brain weight and tissue

A significant decrease in brain weight (p<0.05) was observed in untreated ovariectomized rats compared to NOVX group (Figure 2). However, no significant change in this parameter was observed following treatment with other substances.

Brain tissue observation revealed marked histopathological signs such as pericellular vacuolation, perivascular oedema. Indicators of apoptosis were also observed in pyramidal cells of the cortex (Figure 3B) and hippocampal CA1 layer (Figure 3J), including central chromatolysis, cell shrinkage, and cell vacuolation in ovariectomized animals. These signs were not observed in the sham group (Figure 3A), and were markedly improved by treatment with estradiol valerate (Figure 3C) or K. anthotheca decoction (Figure 3D). 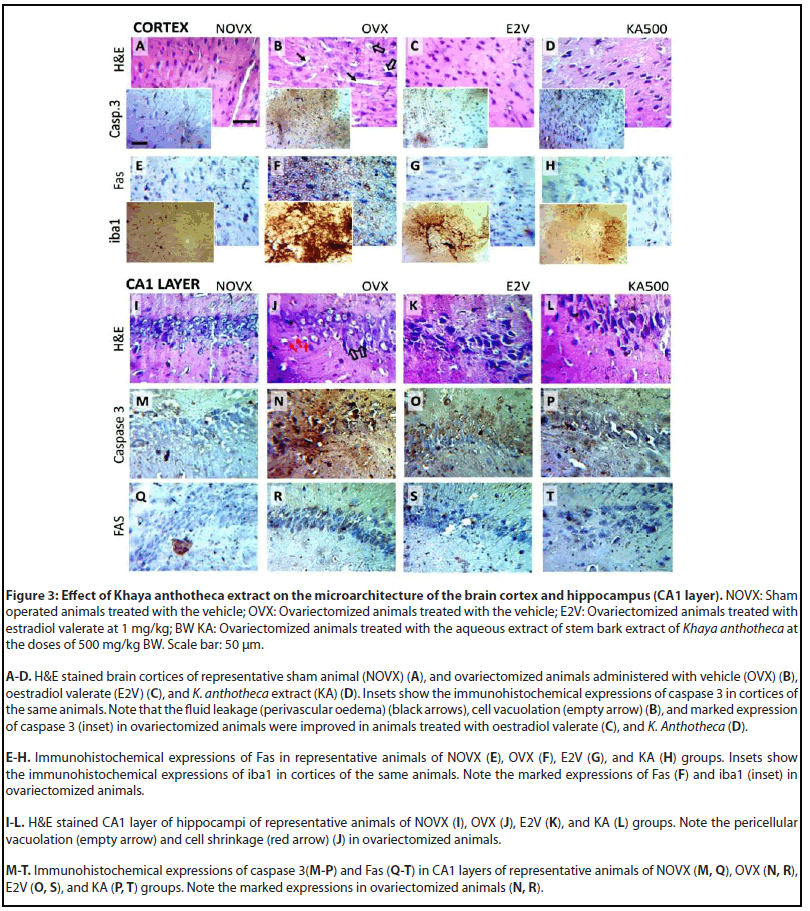 All the markers immunolabeled (caspase 3, Figures 3B, N; Fas and iba1) were over expressed in brains of ovariectomized animals (Figures 3F, and 3R), compared to sham group (Figures 3A, 3E, 3M and 3Q), and were markedly improved by treatments with estradiol valerate (Figure 3C, 3G, 3O and 3S) or K. anthotheca decoction (Figure 3D, 3H, 3P, 3T). The decoction effects increased with the dose (data not shown).

In the present study, ovariectomized animals displayed significant body weight increase compared to sham group, 42-days after ovariectomy. This observation is in accordance with previous reports [25,26] and with observations in women undergoing natural menopause, where gradual loss of estrogen contributes to weight gain [27]. Estrogen deficiency results in the alteration of energy metabolism, which in turn results in abdominal fat increases [28,29]. Weight increase was not observed in ovariectomized animals treated with estradiol valerate or K. anthotheca decoction, suggesting that some constituents of this plant may have estrogen-like properties. These effects may be mediated partly by phytoconstituent families with well characterized phytoestrogen potential such as polyphenols, whose presence in K. anthotheca was revealed in the present study by phytochemical analyses.

Ovariectomy causes an oxidative stress deleterious for neurons in rats [7,30], as estrogen-mediated activation of cellular anti-oxidant systems is lacking [31]. In the present study, increase in the levels of lipid peroxidation marker MDA and decrease in the levels of intracellular radical scavenger GSH were observed in untreated ovariectomized rats compared to their sham counterparts. Treatment with K. anthotheca decoction improved (decreased) MDA levels, suggesting a mitigation LDL peroxidation [32]. In addition, K. anthotheca decoction increased GSH level, thus, probably mitigated the accumulation of hydroperoxides resulting from estrogen depletion [33,34]. Altogether, these observations suggest that K. anthotheca decoction is endowed with a strong antioxidant activity, further supporting the hypothesis of the presence of constituents with estrogen-like properties. The antioxidant properties of K. anthotheca were confirmed by ferric reducing antioxidant power (FRAP) assay. Polyphenols, a class of compounds reported antioxidant effects on brain tissue [35], was detected in K. anthotheca decoction in the present study.

Marked histopathological signs, including indicators of neuronal damage and loss, were observed in brain cortices and hippocampi (CA1 layer) of ovariectomized animals. As discussed above, these damages can be explained by oxidative stress. Like estradiol valerate, treatment with K. anthotheca decoction mitigated these signs, possibly due to estrogen-like effects [36]. In addition, we observed over expressions of markers of neuroinflammation in brains of untreated ovariectomized animals, but not in those treated with estradiol valerate or K. anthotheca decoction, suggesting a neuroprotective activity. Decreases in expressions of microglia inflammation marker iba1, of the marker of cellcell- mediated neuronal death Fas, and of the apoptosis marker caspase 3 observed in this study may emerge from the well-established anti-inflammatory properties of estrogenic compounds [3,31,36]. On the same hand, a decrease in brain mass probably due to cell loss was observed in untreated ovariectomized rats at the end of the experiment, but not in their counterparts treated with K. anthotheca decoction, confirming neuroprotective effects.

Estrogen depletion at the menopause was reported to associate with cognitive decline [4]. Alzheimer’s disease is the most common form of dementia and is characterized by a progressive decline in cognitive function [37]. In this study, the K. anthotheca extract shows neuroprotective properties effects on ovariectomized rat mediated partly by antiapoptotic, anti-inflammatory and antioxidative effects. For that, it is important to evaluate other beneficial effects of the extract in other experimental models of neurodegeneration and dementia.

The present data shows a remarkable increase in the body weight, increased oxidative stress, and neuronal loss in Wistar rats 42-days after ovariectomy. These alterations were prevented or improved by subchronic treatment with K. anthotheca decoction, indicating that some constituents of K. anthotheca may have estrogen-like properties. The neuroprotective properties were mediated partly by antiapoptotic, anti-inflammatory and antioxidative effects. These observations justify the traditional medicine used of this plant and warrant further studies, including in other experimental models of neurodegeneration and dementia.

All the authors declare no conflicts of interest within this article.

16. Ojokuku SA, Okunowo WO, Apena A. Evaluation of the chemical composition of Khaya grandifoliola and Ficus capensis. Journal of Medicinal Plants Research. 2010 Jun 18;4(12):1126-9.

28. Dagnault AN, Deshaies YV, Richard DE. Involvement of type I corticosteroid receptor in the effects of ovariectomy on energy balance. American Journal of Physiology-Regulatory, Integrative and Comparative Physiology. 1996 Jan 1;270(1): R199-206.

The cortex, hippocampus, and amygdala are among the brain regions where estrogens may act to improve cognition, memory and mood. In these regions, estrogens have many beneficial effects, including neuroprotection, neurogenesis, as well as neurotrophic, antioxidant, and anti-inflammatory effects [1-2].