Copyright: © 2020 Narkhede M, et al. This is an open-access article distributed under the terms of the Creative Commons Attribution License, which permits unrestricted use, distribution, and reproduction in any medium, provided the original author and source are credited.

Diffuse large B-cell lymphoma (DLBCL) is the most common non-Hodgkin lymphoma (NHL), making up to about 30%-40% of NHL in the U.S. PET-CT scan is recommended as the most accurate imaging technique in DLBCL for staging and response assessment. Pretreatment assessment of PET-CT scan derived metrics such as total metabolic tumor volume (TMTV) has been shown to correlate with progression-free survival (PFS) and overall survival (OS) in DLBCL. In our study, we evaluated the prognostic significance of pretreatment TMTV on event-free survival (EFS) at 24-months. We also evaluated the correlation between pretreatment TMTV, total lesion glycolysis (TLG) and cell of origin (COO). TMTV was calculated using a threshold of 41% of the max pixel value (based on prior studies) to draw the volume of interest (VOI) for a lesion. A pooled t-test was performed to compare TMTV, TLG and COO with EFS at 24 months. Chi-Square test compared TMTV with COO. The median age was 58 years, with a median duration of follow up of 26 months. The mean pretreatment TMTV and pretreatment TLG was 295 cm3 and 4519 units, respectively. Amongst all patients, 19.2% had an event within 24 months. When TMTV was compared to EFS at 24 months, the mean TMTV was 304 cm3 for those who had an event versus 294 cm3 without (p=0.95). TLG, compared to EFS at 24 months showed a mean TLG of 3391 for those who had an event versus 4914 without (P=0.40). COO, when compared with TLG, had means of 4365 and 4933 for germinal center (GCB) and non-germinal center (non-GCB) subtypes, respectively with a p=0.79. This study demonstrates a lack of prognostic significance of pretreatment PET scan on EFS at 24 months in DLBCL and lack of correlation between pretreatment TMTV, TLG, COO and EFS at 24. Higher TMTV correlated with inferior PFS and retains its prognostic significance as determined by prior studies. Larger sample size is required to determine the validity of our findings.

Diffuse large B-cell lymphoma (DLBCL) is a heterogeneous disease with variable outcomes. The majority of patients benefit from chemo-immunotherapy; however, 30 to 40% relapse after first-line treatment, and 10% are refractory to first-line treatment. This variability in outcome has led to the identification of prognostic factors to stratify patients based on their risk of relapse. The five-factor international prognostic index (IPI) was formulated for such risk stratification more than 20 years ago, based on clinical information obtained from patients with aggressive lymphomas treated with cyclophosphamide, doxorubicin, vincristine, and prednisone (CHOP)-like chemotherapy [1]. The addition of rituximab to CHOP chemotherapy led to improved outcomes, diminishing the discriminatory capacity of IPI amongst risk groups [2]. Efforts to enhance the prognostic model by adding or defining new factors have only led to minor improvements without the ability to identify patients at risk of an inferior outcome [3].

A significant component of all prognostic scoring systems’ is the assessment of tumor bulk by Ann Arbor staging. Positron emission tomography (PET) visualizes tumor metabolic activity, allows functional characterization of the disease, and currently represents the preferred imaging modality for disease staging and assessment of response to treatment. Scoring criteria for assessment of response, have been developed and validated using visual and quantitative methods [4]. Similarly, after treatment, the achievement of event-free survival (EFS) at 24 months is a robust surrogate endpoint for overall survival (OS) in DLBCL treated with chemo-immunotherapy [5]. Total metabolic tumor volume (TMTV) is an alternative method for assessment of tumor disease burden, which has the potential advantage of combining volumetric and functional assessment of disease as provided by 18-Fluorodeoxyglucose positron emission tomography (18-FDG PET/CT). The total metabolic tumor volume (TMTV) is calculated using a fixed SUVmax threshold of 41%. Total lesion glycolysis (TLG) is a measure of the level of glucose accumulation within all regions of interest on a PET scan. Retrospective studies that utilized TMTV for assessing tumor bulk have shown to predict progressionfree survival (PFS) and OS in DLBCL [6,7]. Based on these prior studies, the primary objective of our study was to determine the prognostic significance of the pretreatment total metabolic tumor volume (TMTV) on EFS at 24 months after treatment. A secondary objective of our study was to determine the correlation of TLG and cell of origin (COO) subtypes on EFS at 24 months.

We evaluated PET-CT scan data from patients diagnosed with DLBCL and treated at a tertiary care institution from 2014 to 2018. The inclusion criteria included, a new diagnosis of DLBCL between Jan 2014 and Jan 2018, histologically confirmed diagnosis of DLBCL by the WHO classification and a pretreatment PET-CT scan done at the same tertiary institution. Patients who received less than two cycles of treatment and without a minimum of 6-months of follow-up period after treatment were excluded from the study.

The pretreatment PET-CT scans were individually reviewed by two nuclear medicine physicians (GE, RJ). The TMTV, measured in cm3, was computed using automated software (syngo®.via, Siemens), and measurements for TMTV were recorded. For each lesion visualized on PET/ CT, a Volume of interest (VOI) or MTV was calculated using a threshold of 41% of the SUVmax (max pixel value for every lesion). The TMTV was then calculated by summing all the MTV for every single lesion with VOI’s excluding areas of high physiological uptake or areas exceeding the anatomical tumor boundaries, as seen on CT.

The lesion glycolysis was calculated for each lesion by multiplying the MTV by the SUVmean (mean value of the FDG uptake in each lesion): MTV x SUVmean. The TLG was obtained for each patient by adding all the individual lesional glycolysis.

The prognostic value of TMTV was determined using EFS at 24 months, PFS and OS as endpoints, censoring at the time of the last follow-up. EFS at 24 months was dichotomized to form two groups; one with EFS less than 24 months and other with EFS for more than 24 months. A pooled t-test was performed to compare TMTV and TLG with EFS at 24 months. The pooled t-test was also used to compare TMTV with COO. A p-value of <0.05 was considered significant. We performed a time to event analysis using the log-rank test and plotted them using the Kaplan-Meir estimates. The cohort was divided into high and low TMTV groups based on pretreatment TMTV values with cutoffs of 550 and 300 for two separate analyses. Cox proportional hazards model was used to perform multivariate analysis. 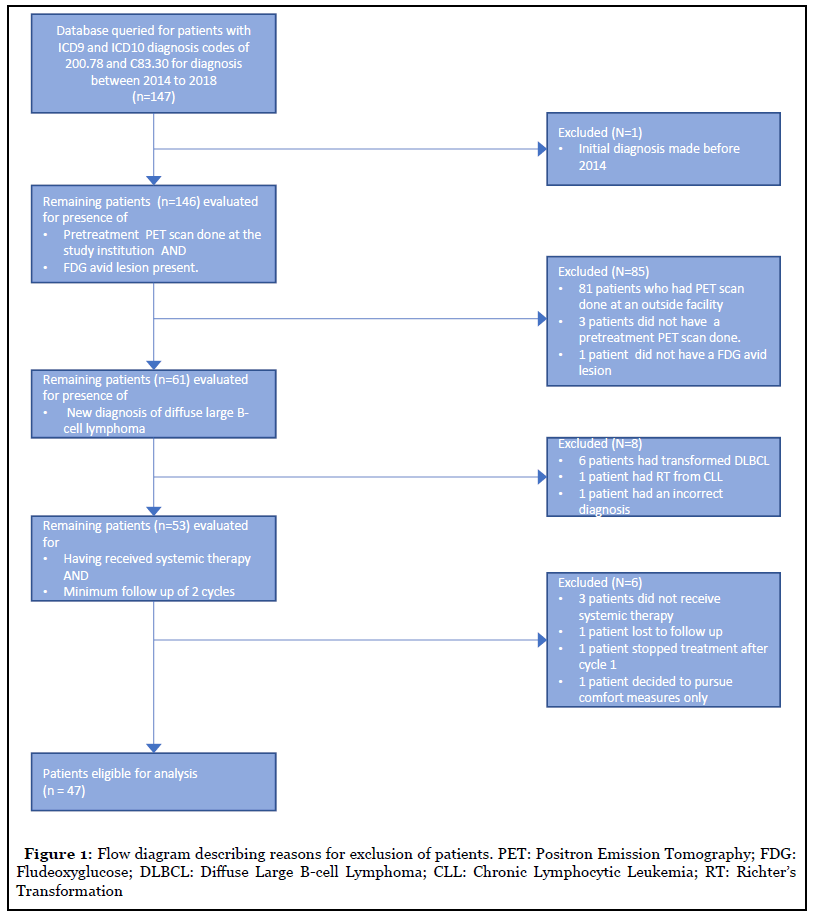 The median duration of follow up was 25 months. Relapses occurred in 7 patients at a median of 7 months (3-60) after diagnosis. Four patients died at a median of 13.5 months (3 – 52). Nine patients had an event within 24 months of diagnosis.

Prognostic value of TMTV and TLG 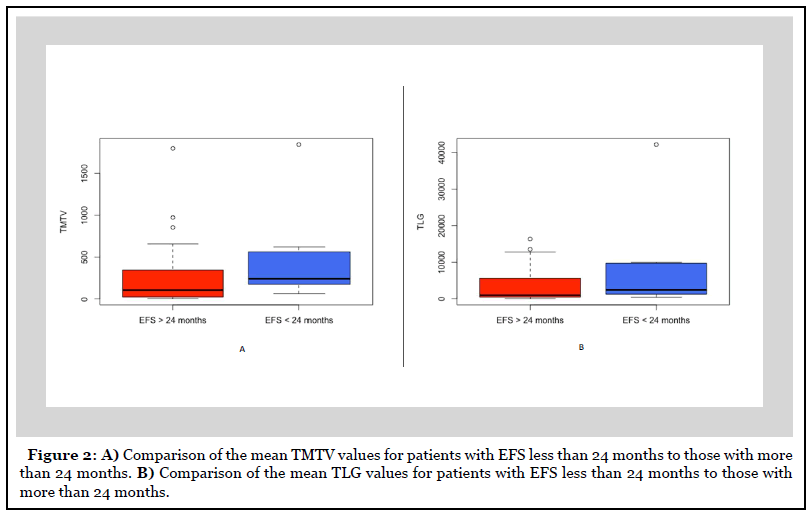 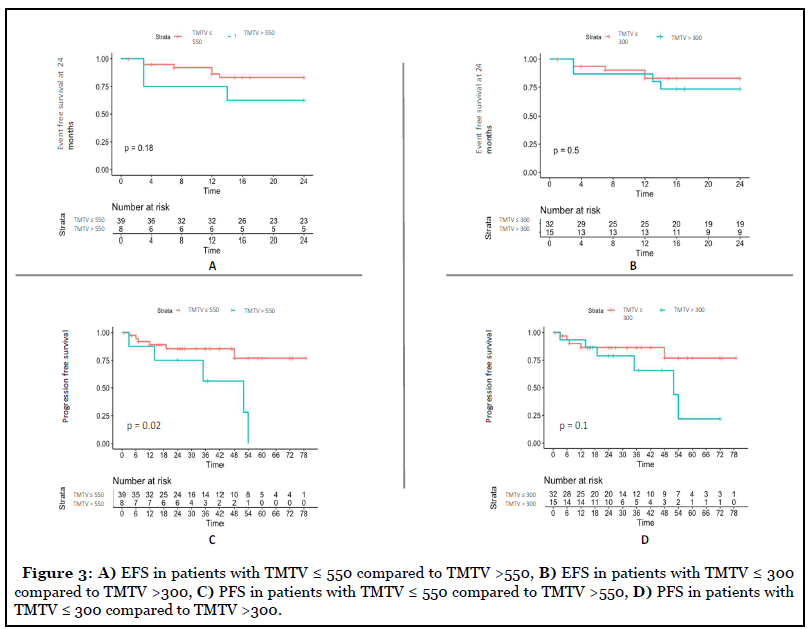 When analyzed for OS, patients with a pretreatment TMTV value of more than 550 had poor OS (p=0.1) but did not meet the predefined threshold of statistical significance, which is possibly due to small sample size. The COO classification of DLBCL using Hahn’s algorithm also did not have any impact on TMTV, TLG, EFS at 24, PFS, and OS.

The measurement of tumor burden is an essential component of prognostic tools. Ann Arbor staging has been the most widely used system for assessing tumor burden. The advent of PET scan has led to improvements in assessing tumor bulk by the ability to delineate viable tumor from necrotic tissue. TMTV is a PET scan derived metric which estimates metabolically viable tumor bulk and has led to its use as a prognostic marker. However, there are few challenges with its use. There have been multiple studies demonstrating its prognostic significance; however, each using a different cut off values to define TMTV high and low groups. There was no standardized definition for determining the volume of interest. Song et al. used SUV of >2.5 as a contouring border, whereas Sasanelli et al. and Cottereau et al. defined the volume of interest using the 41 % SUVmax method [6-8]. Lastly, the lack of prospective studies has led to the failure of its implementation in clinical practice.

In our study, we determined the VOI using the 41% SUVmax method as determined by the European procedure guidelines version 2. [9]. We evaluated both cutoffs, 550 and 300, to determine its prognostic significance on EFS at 24 months. The pretreatment TMTV and TLG were not predictive of EFS at 24 months, and there was no difference in the mean TMTV and TLG. When we used the cut-off of 550, patients with high TMTV had similar EFS at 24 months compared to the low TMTV group. However, PFS was inferior in the high TMTV group. This lack of difference in EFS at 24 months with a difference in PFS in our study, is possibly due to late relapses that were observed in patients with TMTV values more than 550. There was no difference in EFS at 24 months and PFS when a cut off 300 was used. These observations, in our study, are different from the observations made by Sasanelli et al. and Cottereau et al., where the Kaplan Meier survival curves begin to diverge as soon as 12 months after diagnosis for patients with higher pretreatment TMTV. These differences are because our study had a small number of patients from a single center. A lower relapse rate was observed in our patient sample compared to historical controls (14% versus 30-40%) possibly attributed to a shorter duration of follow-up. This lower relapse rate has resulted in discordant observations in some of our findings compared to other similar studies.

The limitation of our study can be overcome in the future by increasing the sample size with patients from multiple centers. In addition, combination with other measures of assessment of tumor burden such as circulating cell-free DNA or circulating tumor DNA will result in building a robust model for assessing tumor bulk. Such a model will refine our prognostic capabilities with its eventual incorporation into prospective clinical trials and clinical practice.

MN designed the study, acquired the data and drafted the manuscript

DD analyzed de-identified data and provided figures for the data