Copyright: © 2020 Pasca S, et al. This is an open-access article distributed under the terms of the Creative Commons Attribution License, which permits unrestricted use, distribution, and reproduction in any medium, provided the original author and source are credited.

Angioimmunoblastic T cell lymphoma (AITL) is one of the most common T-cell lymphomas, second only to peripheral T-cell lymphoma not otherwise specified (PTCL-NOS) [1,2]. Initially AITL was considered a non-malignant lymphadenopathy with immune hyperactivation [3], nowadays being classified as a PTCL [4]. The former classification was implied because of the autoimmune events that present alongside this entity with a myriad of autoantibodies being elevated [5]. These autoimmune events are being caused through the hyperstimulation of B-cells [5] (Figure 1). Today, the entity is considered to be a clonal proliferation of T follicular helper (TFH) cells, fact that could be inferred from the clinical presentation of AITL and from the expression signature of AITL clone similar to TFH cells [6,7]. 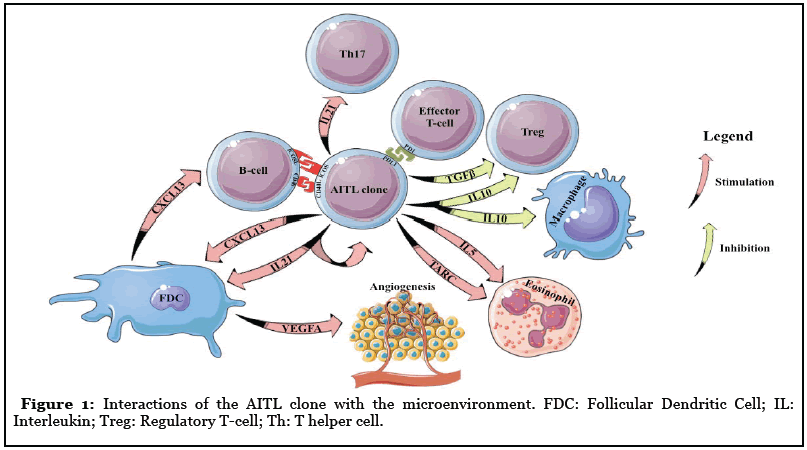 Regarding the mutational patterns that occur in AITL, one of the most frequently mutated genes in AITL is represented by TET2. This has been shown to be associated with T-cell lymphomas presenting a TFH phenotype, showing a possible causal link between TET2 inactivation and the acquirement of this phenotype [8,9]. Aside the role in the initiation of AITL, it has also been shown that TET2 mutations lead to a reduction in T regulatory cells (Tregs) and increased number of TFH cells [10]. Additionally, TET2 mutations were shown to destabilize FOXP3, inhibiting Treg formation, and to increase the number of T helper 17 (Th17) cells, frequently associated with autoimmune disease [11].

Two of the most important signaling molecules that lead to this immune hyperactivity are represented by CXCL13 and IL21 [12]. Both of those not only lead to B-cell stimulation, but also to Th17, in the case of IL21, and autocrine stimulation of the TFH cells [12,13]. In turn, the stimulation of Th17 cells lead to an increased probability of developing autoimmune events [14]. Moreover, the AITL clone has also been shown not only to inhibit the Treg activity through TGFβ and IL10 [12], but also to deplete these cells [15], leading to an imbalance between the Th17 and Treg cells and an increase in autoimmune events [14]. Aside these paracrine and autocrine interactions, the normal TFH cells, and probably the AITL clone by extension, interact with B-cells through direct contact. Some of the important molecules in this case are represented by CD40L [16] and ICOS [17], leading to further co-stimulation of the B-cells and exacerbation of the autoimmune events. From a pathology standpoint, these TFH cells were shown to be rosetting around B-cells, confirming their direct interaction [12].

Another important cell in the AITL microenvironment is represented by the follicular dendritic cell (FDC), which has been shown to frequently express CXCL13 and to be located in proximity to the AITL clone [18,19]. These results not only show that some of the architecture of the normal germinal center is maintained, with CXCL13 leading to a stimulation of the TFH cells, but also the possibility that FDC also lead to a supplementary activation of the B-cells through the secretion of CXCL13 [18].

Regarding the resident macrophages it has been shown that IL10 elevation and an increase in M2 polarized macrophages are associated with a worse prognosis, showing a possible immune evasion and an increase in AITL activity as IL10 secretion represents one of the functions of the normal TFH cell [20,21]. Considering the immune evasion that AITL can present, it has also been shown that PDL1 expression is frequently positive on T-cell lymphoma with a TFH phenotype, showing a potential “shield” that the AITL clone presents against the immune hyperactivation it induced [22,23].

One pathology aspect of AITL that can also be mentioned is the high degree of neo-angiogenesis present, this being caused by the AITL clone and the microenvironment it orchestrates [12]. It has been shown that VEGFA is positive both on the AITL clone and on the endothelial cells of this microenvironment, which, alongside the typical highly vascularized pathology of this entity, shows it’s importance in orchestrating the neo-angiogenesis in this case [24,25]. Furthermore, the BCL2 mRNA levels in neo-angiogenic cells was shown to correlate with VEGFA levels and with clinical prognosis, showing that in AITL the high vascular density is not only caused by the higher stimulation of the neo-angiogenic cells, but also by the decreased apoptosis in those [26].

As eosinophils were recurrently shown to be involved in variety of autoimmune diseases AITL is no exception, with high eosinophil infiltrates being present in the microenvironment. This increase in the eosinophils was explained through the increased secretion of IL5 and TARC by the AITL clone, which were also shown to correlate with the prognosis of these patients [27].

Thus, the AITL microenvironment shows the effects of the AITL clone on several immune and non-immune cells, with potential implications in a better understanding of the fundamental biology of TFH cells.

All authors contributed to the writing and revision of this article.