Is There a Simple and Easy Way to Detect Singlet Oxygen? Comparison of Methods for Detecting Singlet Oxygen and Application to Measure Scavenging Activity of Various Compounds

Copyright: © 2020 Takajo T, et al. This is an open-access article distributed under the terms of the Creative Commons Attribution License, which permits unrestricted use, distribution, and reproduction in any medium, provided the original author and source are credited.

Reactive oxygen species (ROS) are known to exert both beneficial and harmful effects in the human body. Singlet oxygen (1O2), is highly reactive and considered as one of the ROS, although it is not a radical molecule. 1O2 reacts with many kinds of biological components such as lipids, proteins, and nucleic acids. 1O2 is short lived because it reacts with biomolecules and collisions with water molecules rapidly causing the return of 1O2 to the ground state, and is therefore not easy to quantify. Antioxidants, such as β-carotene, lycopene and astaxanthin, are quenchers of 1O2. To compare the 1O2 quenching activity of new test compounds with these typical quenchers, it is desirable to measure 1O2 specifically, speedily, and easily. In this paper, various methods for the measurement of 1O2, such as UV-Vis spectroscopy, fluorescence spectroscopy, and electron spin resonance, were compared for the purpose of evaluating the 1O2 quenching activity of various test compounds.

Reactive oxygen species (ROS) are known to exert both beneficial and harmful effects in the human body. The beneficial aspects of ROS are, for example, roles in signaling cascades and immunological defense. In contrast, overproduction of ROS has been reported to be involved in various diseases such as cancer, cardiovascular disease, and diabetes. To prevent the harmful effects of ROS, organisms have antioxidant enzymes and various antioxidative compounds. Various antioxidative compounds are present in foods, beverages, agricultural products, plants, as well as in the human body [1]. Measurement of antioxidant activity is important for developing new drugs, health foods, and nutritional supplements.

Atmospheric oxygen (triplet oxygen, 3O2) is a stable form of oxygen molecule. The other form, singlet oxygen (1O2), is highly reactive and considered as one of the ROS, although it is not a radical molecule. 1O2 reacts with many kinds of biological components such as lipids, proteins, and nucleic acids [2-4]. 1O2 is short lived because it reacts with biomolecules and collisions with water molecules rapidly causing the return of 1O2 to the ground state. Thus, it is not easy to quantify 1O2. 1O2 is thought to be a cause of some disorders such as photo-aging, skin damage, and erythropoietic porphyria [5]. On the other hand, cell death and tissue destruction induced by 1O2 are used for photodynamic therapy (PDT), a promising cancer treatment [6-8].

It is known that antioxidants, such as β-carotene, lycopene, and astaxanthin, are quenchers of 1O2. In order to compare the 1O2 quenching activity of new test compounds with these typical quenchers, it is desirable to specifically, speedily, and easily measure 1O2. In addition, since light and heat may decompose the structure and affect the quenching activity of the test compound, it is not ideal to use light or heat for 1O2 measurement. In this paper, we summarize and compare various methods for the measurement of 1O2 for the purpose of evaluating the 1O2 quenching activity of various test compounds. Artificial 1O2 generation is usually performed either by photosensitization of photosensitizers, such as rose bengal and porphyrins, or thermal decomposition of 4-methyl- 1,4-etheno-2,3-benzodioxin-1(4H)-propanoic acid (EP).

UV-Vis absorbance measurement is simple, speedy, and the most commonly used method. Anthracene and benzofuran are known as compounds that selectively scavenge 1O2. The absorbance of these aromatic molecules decreases when they are oxidized by 1O2, and the amount of 1O2 can be estimated semi-quantitatively from the decrease in absorbance. UV-Vis spectroscopy is somewhat less sensitive than fluorescence spectroscopy. However, UV-Vis spectroscopy is less prone to artifacts, since the absorption spectrum of a compound with high absorption coefficient cannot be dominated by small amounts of contaminants. One of the most widely used 1O2 probes for UV-Vis spectroscopy is 1,3-diphenylisobenzofuran (DPBF, Figure 1), which is commercially available at a low cost. DPBF reacts with 1O2 in an essentially diffusionlimited reaction rate and thus has very high sensitivity. It traps up to 50% of 1O2 produced in alcohol/water or micellar solution. In addition, replacing H2O with D2O (a 1O2 lifetime extender), is an option when only small amounts of 1O2 are produced [9]. However, DPBF is not specific to 1O2 and readily reacts with other ROS such as hydroxyl radical, alkoxyl radical (RO•), and H2O2 [10-12]. Furthermore, if the test compound is colored, the color affects the absorbance measurement with DPBF. 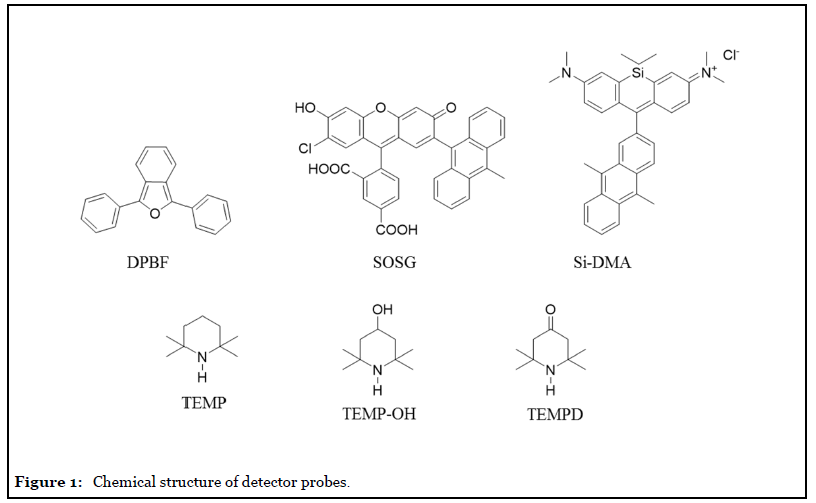 Comparing the quantitative measurements of absorbance and fluorescence, the detection limit of fluorescence is generally three orders of magnitude lower. To detect 1O2, a fluorescent sensor called Singlet Oxygen Sensor (SOSG, Figure 1) [13] has been used widely, ranging from material studies to medical applications, although the probe is expensive. SOSG exhibits weak blue fluorescence with excitation peaks at 372 nm and 393 nm and emission peaks at 395 nm and 416 nm. Upon reaction with 1O2, endoperoxide, the immediate product of SOSG, exhibits green fluorescence with excitation and emission peaks at 504 nm and 525 nm, respectively. Therefore, SOSG can readily detect 1O2. However, it was demonstrated that SOSG can generate 1O2 under exposure to UV (355 nm) or visible light (532 nm) in the absence of photosensitizers [14]. It was confirmed that the irradiation of visible light induces SOSG transitions to a triplet excited state, which converts 3O2 to 1O2 [15]. Therefore, a positive error can occur with respect to the amount of 1O2 measured by SOSG. In addition, since many photosensitizers used to generate 1O2 have a pronounced absorption band in the visible region, if the absorption overlaps with the emission peak of the fluorophores of probes, the signal produced by the reaction with 1O2 will be diminished. Photosensitizers, such as rose bengal and eosin Y, exhibit an intense absorption band at 525 nm, which coincides with the emission peak of SOSG endoperoxide [16]. Incorrect use of SOSG may lead to misinterpretation of the data on the yield of 1O2 production by photosensitization reactions. For biological application, a new type of fluorescence probe for 1O2 (Si-DMA, Figure 1) was developed [17]. Si-DMA has an emission peak at 680 nm and is permeable through cell membranes. It is now commercially available and can be used for imaging of 1O2 produced in mitochondria and by PDT.

1O2 can be directly measured by detecting weak light emission in the near infrared region. Phosphorescence at 1270 nm emitted by 1O2 can be detected specifically at a low quantum yield [18]. By using an improved nearinfrared- sensitive photomultiplier tube, time-resolved 1O2 luminescence was measured in various solutions of aluminum tetrasulphonated phthalocyanine and Photofrin [19]. Time-resolved analysis showed a strongly reduced lifetime of 1O2 and an increased lifetime of triplet state of the photosensitizer in the intracellular component [19]. This method is often used for imaging in cells and animals. However, the method requires specialized instruments because of the low quantum yield.

Recently, a new assay method to quantify 1O2 absorption capacity (SOAC) was developed [20-23]. The SOAC values were measured in ethanol/chloroform/D2O (50:50:1, v/v/v) solution at 35°C using a UV-Vis spectrophotometer equipped with a six-channel cell positioner and a temperature control unit. The reaction of antioxidants with 1O2 was measured using the competition reaction method, where EP was used for 1O2 generation and DPBF was used as an absorbance probe. In the SOAC method, 1O2 quenching activity is evaluated kinetically, and the activity of various phenolic antioxidants can be compared. The method is useful for evaluating the 1O2 quenching activity of both lipophilic and hydrophilic antioxidants. The method allows for measurement of activity that differs in five orders of magnitude (different rate constants of 1010 M-1s-1 for lycopene to 105 M-1s-1 for ferulic acid). However, in the SOAC assay, decrease in the absorbance is observed in 120 to 180 min, during which the test compound may become photodegraded.

Electron spin resonance (ESR) is a non-destructive method that detects unpaired electrons and is specific to free radicals. Since 1O2 is a ROS but is not a free radical, it cannot be detected directly by ESR. A 1O2 detector probe, 2,2,6,6-tetramethylpiperidine (TEMP, Figure 1), was introduced in 1976 [24]. TEMP reacts with 1O2 to produce a stable nitroxide radical, 2,2,6,6-tetramethylpiperine- N-oxyl (TEMPO), which can be quantified by ESR spectroscopy. Other sterically hindered secondary amines, such as 2,2,6,6-tetramethyl-4-piperidinol (TEMP-OH, Figure 1) and 2,2,6,6-tetramethyl-4-piperidone (TEMPD, Figure 1), are also used as 1O2 detector probes [25-27]. Photoirradiation of rose bengal is often used as a 1O2 generation method. When 1O2 generated in the rose bengal system is detected by ESR using a hindered secondary amine probe, the signal of the nitroxide radical derived from the secondary amine probe is measured. However, rose bengal reportedly generates ROS other than 1O2, such as super oxide anion radical and hydroxyl radical [26,28], which may affect the ESR signal. Indeed, when visible light was irradiated to the mixed solution of TEMP-OH and rose bengal, obvious splitting was observed in the ESR spectrum. This observation suggested the overlap of 4-oxo-2,2,6,6-tetramethylpiperidine-N-oxyl (TEMPON) and 4-hydroxy-2,2,6,6-tetramethylpiperidine-N-oxyl (TEMPOL) [25]. It was reported that the exposure of TEMPOL to hydroxyl radical led to the appearance of a new triplet ESR signal attributable to TEMPON, along with a reduction in the intensity of TEMPOL signals [29]. The following is a possible explanation for the ESR signal splitting observed in the mixed solution of rose bengal and TEMP-OH. TEMP-OH reacts with 1O2 to form TEMPOL, which is oxidized to TEMPON by hydroxyl radicals generated from rose bengal. On the other hand, when EP was used for 1O2 generation and TEMP-OH was used as a detector probe, no splitting of the three-line ESR spectrum was obtained, although the signal intensity was very small [25]. When the mixture solution of EP and TEMP-OH was reacted at 35°C for 40 min, the ESR signal intensity was smaller than that obtained with irradiation of rose bengal with visible light for 3 min, supporting that 1O2 production from EP is smaller than that from rose bengal. For the detection by ESR, if EP is used as a 1O2 generator, it is recommended to add D2O in the system to increase the signal intensity. Although the amount of 1O2 generated from EP is small, it is possible to test the 1O2 scavenging activity of test compounds with a reaction time of 30~40 min in the presence of D2O using TEMP-OH as a detector probe.

Table 7: Comparison of the methods for detecting 1O2.