Copyright: © 2021 Haldar AK. This is an open-access article distributed under the terms of the Creative Commons Attribution License, which permits unrestricted use, distribution, and reproduction in any medium, provided the original author and source are credited.

For their survival, many intracellular pathogens build and retain pathogen-containing vacuoles (PVs) to hide from the cytosolic host defense systems. Among the several PV-resident human pathogens are the obligate intracellular protozoa parasites Leishmania donovani and Toxoplasma gondii. The proinflammatory cytokine IFN?, a key player in cellular immunity, can orchestrate a variety of defensive functions that destroy or prevent these intravacuolar pathogens from replicating inside host. While recent studies have shown that activating host cells with IFN? causes the recruitment and accumulation of IFN?-inducible GTPases, Immunity Related GTPases (IRGs), and Guanylate Binding Proteins (GBPs) around Toxoplasma PVs in order to destroy them, little is known about their function in destroying Leishmania containing vacuoles (LCVs). We recently reported that, in non-phagocytic mammalian cells without efficient targeting to LCVs, mouse and human GBPs play an important role as host protective factors against L. donovani infection, even in the absence of IFN? stimulation. Despite the fact that IFN?-inducible IRGs are required for GBP-mediated T. gondii PV destruction in murine cells, our findings showed that murine GBPs promote host defense against L. donovani from a distance, suggesting that the molecular machinery of this defense pathway is distinct from the IRG-dependent defense pathway active against T. gondii.

Leishmania donovani is an obligatory intracellular protozoa pathogen that transmits by sand flies to mammalian hosts. L. donovani is the causative agent of the disease Visceral Leishmaniasis (VL), also known as Kala-azar, which causes hepatosplenomegaly i.e., enlargement of the spleen and liver in patients. The VL is regarded as one of the most devastating neglected infectious diseases in tropical and sub-tropical regions and can be fatal if the patients left untreated [1]. Professional phagocytic cells (e.g., macrophages, dendritic cells, neutrophils) are considered to be the most important host cells for L. donovani for its survival and replication [2-4]. However, several in vitro and in vivo studies have shown that non-phagocytic cell types like epithelial cells and fibroblasts [5-7] endocytose L. donovani. Despite the significance of these findings, little attempt has been made to address the questions: 1) How these non-phagocytic cells restrict parasite growth? 2) Does it depend on an interferon-induced pathway? 3) If not, then how do nonphagocytic cells control this pathogen? In a recent study, we discovered that non-phagocytic cells have intrinsic properties that limit L. donovani growth even in the absence of interferon-gamma (IFNγ) stimulation via an autophagy mediated non-canonical pathway [6].

The proinflammatory cytokine IFNγ plays a significant role in the host’s protection against several microbial infection. IFNγ triggers cell-autonomous immunity through the induction of more than one thousand IFN-regulated genes including GTPases. The IFNγ-inducible GTPases, immunity related GTPases (IRGs) and guanylate binding proteins (GBPs) are important intracellular effectors against protozoan pathogen T. gondii [8-10]. Mouse Guanylate-binding proteins (GBPs) act cooperatively with IRGs to form supramolecular complexes and associate with T. gondii PVs to assemble host defense responses including autophagy induction with the delivery of antimicrobial molecules [11-14]. The IRG protein family is divided into two subgroups: IRGM and GKS-IRG proteins. The GKS-IRGs are mostly present in the cytosol, while the IRGM proteins are mostly found in endomembranes. GKSIRGs are known to specifically target PVs for destruction, while IRGM proteins protect self-organelles and aid in the coordination of GKS-IRG and GBP targeting of nonself PVs [10,15]. Both GKS-IRGs and IRGM proteins are essential for cell-autonomous resistance against T. gondii infection in mice [15,16]. We previously discovered that the absence of the IRGM proteins Irgm1 and Irgm3 or both resulted in defective targeting of GKS-IRGs and GBPs to T. gondii PVs, as well as impaired the ability to regulate T. gondii growth in vitro and in vivo [10,13,16]. T. gondii PVs targeting by mouse GKS-IRGs and GBPs has emerged as the epicenter of innate immunity to limit this pathogen in mice. As a PV residing pathogen, it was predicted that L. donovani will be subjected to these IFN-inducible GTPases mediated immune recognition and restriction by the host.

Previous, in vitro and in vivo studies of L. major-infected mouse bone marrow-derived macrophages (BMDMs) and different organ tissues indicated increased gene expression of mouse GBPs [17,18]. Another research found increased expression of hGBP1 and hGBP2 in dendritic cells (DCs) infected with L. major, as well as increased expression of hGBP1 in L. donovani infected DCs derived from healthy human blood [19]. In all these studies, increased gene expression of mouse and human GBPs in immune cells and tissues was observed during infection with various Leishmania spp. However, the GBPs’ potential function as host protective factors against Leishmania infection has never been studied. Intriguingly, we recently discovered that GBPs are induced in nonphagocytic cells by L. donovani infection in an IFNγ-independent manner and are involved in parasite growth restriction [6]. In contrast to its wildtype counterpart, L. donovani is more susceptible in Gbpchr3-/- mouse embryonic fibroblasts (MEFs), which lack the chromosome 3 Gbp gene cluster encoding Gbp1, Gbp2, Gbp3, Gbp5, and Gbp7. Surprisingly, even in the presence of IFNγ, we were unable to detect any association of mGBPs and GKS-IRG (Irgb10) to L. donovani containing vacuoles (LCVs) in comparison to T. gondii containing vacuoles [6,20]. Though the IFNγ is active and induces higher expression of GBPs in non- phagocytic cells yet fails to further enhance anti-Leishmanial activity in these cells compared to the IFNγ untreated cells. Considering that GBPs are IFN-inducible genes (ISGs), one would have potentially predicted that IFNγ priming would further enhance host resistance. One possible explanation of this unpredicted finding is that the robust induction of GBP expression by L. donovani infection alone, even in very early hour of post infection (6 hpi), may make IFN priming obsolete [6]. Additionally, it is surmised that the GBP-dependent mechanism of host defense that occurs independent of GBP translocation to the LCVs may require relatively low to intermediate expression of GBPs, in contrast to the translocation-dependent mechanism observed for T. gondii [12,20], and therefore the additional IFN-mediated boost of GBP expression does not translate into a more restrictive host response.

We also discovered that MEFs lacking both Irgm1 and Irgm3 regulate L. donovani infection as efficiently as their wildtype counterparts, demonstrating a GBP-dependent yet IRGM-independent cell-intrinsic immune response to clear L. donovani from MEFs, which is presumably mechanistically distinct from the GBP-mediated and IRGM-dependent cell-autonomous host response that regulates T. gondii infections in this cell type. Similar to what we find with mouse GBPs in MEFs, we observed that hGBP1 promotes parasite killing from infected human epithelial A549 cells in a process that does not involve detectable translocation of hGBP1 to LCVs. Studies that explain the PV-targeting independent but hGBP1- mediated restriction of T. gondii growth in A549 cells made similar observations [21]. Thus, GBP-mediated host defense is an important part of innate immunity to T. gondii and L. donovani in mammalian hosts, but the molecular machinery underlying PV destruction is likely to be multipart and probably host and/or pathogen speciesspecific.

Leishmania, for its survival, resists the harsh conditions created by the phagocytic cells. Following phagocytosis, Leishmania prevents phagosome-lysosome fusion in order to avoid the hostile environment of the phagolysosome, as shown by the impaired targeting of lysosome-associated membrane protein 1 (LAMP-1) to LCVs [22-24]. In contrast to the phagocytes, we demonstrated in our recent study that non-phagocytic MEFs and human A549 cells inhibit Leishmania growth by promoting LCVs maturation into LAMP1 and LAMP2 positive compartments. We further demonstrated that these LCV maturation is controlled by GBPs both in mouse and human cells (Figure 1) [6]. GBPs have been shown to interact with the autophagy machinery of the host to demonstrate their antimicrobial properties against intravacuolar pathogens by direct targeting of the pathogen containing vacuoles [25]. In contrast, much less is known about whether GBPs, without efficiently translocating to the site of infection, can affect host autophagy machinery to detect and restrict microbial growth. In our recent study we discovered that, without efficient targeting to LCV, mouse GBPs on chromosome 3 and human GBP1 promote the delivery of LCVs to autophagosomal compartments decorated by the autophagy marker LC3, and limit Leishmania growth in non-phagocytic cells (Figure 1) [6]. Moreover, we discovered that autophagy-deficient fibroblasts (Atg3-/- MEFs), similar to Gbpchr3-/- MEFs, are highly susceptible to Leishmania, indicating that GBPs “acting from a distance” most likely operate as regulators of the antimicrobial autophagy (xenophagy) pathway. While this research demonstrates how GBPs restrict growth of Leishmania parasite in non-phagocytic cells via an autophagy mediated, noncanonical pathway that operates independent of detectable translocation to the parasitophorous vacuoles, a number of key questions remained unanswered. For instance, in future studies, it will be important to gain further insights into the mechanistic underpinnings of how GBPs instructs the delivery of LCVs to the autolysosome in infected cells. It remains to be determined if this non-canonical GBP mediated restriction is also effective against other Leishmania spp. It will also be interesting to investigate whether such a mechanism also operates in L. donovani infected phagocytic cells or not. 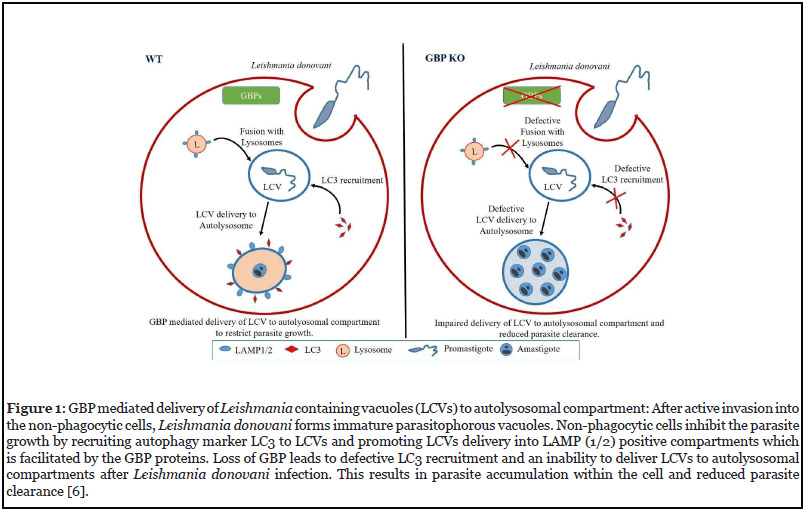 Importantly, previous studies have shown that autophagy has only moderate or no anti-Leishmania activity in macrophages but instead has been identified in at least one study as a host pathway that promotes Leishmania replication in macrophages [26-30]. In phagocytes, however, other anti-Leishmania host defense mechanisms such as the production of reactive oxygen species (ROS) and reactive nitrogen species (RNS), have been discovered [31] which are not effective in non-phagocytic cells like fibroblasts [32]. These previous studies, together with our new findings, suggest that the most important Leishmania targeting host defense pathways in phagocytes and nonphagocytes may be distinct.

In summary, our recent study showed a unique role of mGbps and hGBP1 that promotes cell autonomous host defense against L. donovani infection in non-phagocytic cells without efficient targeting to parasitophorous vacuoles [6]. Previous studies have shown non-phagocytic cells endocytose Leishmania spp [5-7], but less is known about how these cells limit the parasite growth. We demonstrated that in non-phagocytic cells, GBPs showed their defense activity against L. donovani infections, most likely by interacting with and/or activating host autophagy machinery to deliver LCVs to the autolysosomal compartments [6]. The specific molecular mechanism underlying this signaling will require further exploration. It is also noticeable that Leishmania interacts with nonphagocytic cells using different mechanisms from those observed with macrophages. Thus, these interactions between Leishmania and non-phagocytic cells need to be studied more closely in order to learn more about their function in the pathogenesis of leishmaniasis.

This research was supported by the Department of Biotechnology (DBT), Ministry of Science & Technology, Government of India, under Ramalingaswami Fellowship Award to A.K.H. (BT/RLF/Re-entry/03/2015). I want to thank Director, CSIR-CDRI for providing necessary facilities for conducting this research. This article has CSIR-Central Drug Research Institute communication number 10276.