Copyright: © 2020 Pilla NI, et al. This is an open-access article distributed under the terms of the Creative Commons Attribution License, which permits unrestricted use, distribution, and reproduction in any medium, provided the original author and source are credited.

Introduction: Skull, rib, corner fractures, and fractures in children who have not started walking are highly associated with abuse. The majority of fractures stemming from abuse occur in children less than two years of age. The purpose of this study is to determine the etiology and relationship of displaced supracondylar elbow fractures with child abuse.

Materials and Methods: Seventy-five displaced supracondylar elbow fractures were reviewed to determine how the injury occurred. Medical records and radiographs were analyzed for demographics, cause of injury, age of injury, injury data, and for the presence of a child abuse investigation. Transphyseal fractures were excluded.

Results: Forty-two males (56%) and 33 females (44%) were studied. The average age was 6 years old (range: 1-year-5-months to 12-years-4-months). Two patients were 12 years of age, 3 were 23 years of age, and 70 were older than 3. All 75 were displaced supracondylar fractures. One fracture was open. All fractures stemmed from a reported accidental fall, including: falls from- -playground equipment 29 (39%), furniture 10 (13%), sports 6 (8%), stairs 3 (4%), bikes 3 (4%), and miscellaneous: running, falling, sledding, tree, wagon, fence, bounce-house, van, deck, power-wheels car, ATV, and go-cart. Outside physicians, orthopaedic surgeons, emergency department physicians, residents, nurses, and technicians evaluated each patient. All of them are able to submit for an evaluation if they suspect abuse. Only 1 patient aged 1-year-5-months, injured from a reported fall at home during a tantrum, was reported for possible abuse. The child abuse evaluation was negative.

The College of Medicine Institutional Review Board (IRB) approved this study. The electronic medical records (EMR) and radiographs for all patients who underwent operative fixation of supracondylar humeral fractures from 2010-2014 were analyzed by the senior author. Seventy-five consecutive displaced supracondylar elbow fractures were reviewed to determine specific information about the manner in which the injury occurred. Data elements recorded from the EMR included patient date of birth, gender, height, weight, handedness, date, time, location, mechanism, and physical exam findings including associated fractures, concurrent injuries, and neurovascular status (Tables 1 and 2). Other parameters collected included date, time, length of surgery, range of motion, including hyper-extensibility, and carrying angle of the contralateral upper extremity. Finally, the medical record was analyzed for evidence of a report of child abuse by any member of the child’s medical care team. The inclusion criteria for this study included patients less than 13 years of age at the time of sustaining a supracondylar fracture. Exclusion criteria included patients greater than or equal to 13 years of age at the time of surgery, nondisplaced fractures that were treated with a cast or splint, and transphyseal fractures.

Seventy-five patients met inclusion criteria. Forty-two males (56%) and thirty-three females (44%) were studied. The average age was six years and two months with a range of 1-year-5-months to 12-years-4-months (Table 1). All patients in this study were independent ambulators at the time of fracture. Two patients were between the ages of one and two years, three were between ages two and three years, and seventy were older than three. The average height and weight were 115.5 cm and 22.7 kg, respectively. Fifty-nine (79%) patients were Caucasian, three (4%) were African American, four (5%) were mixed races, and nine (12%) were of unknown race. Sixty-five (87%) patients were right-hand dominant, seven (9%) were left hand dominant, and three (4%) were too young for handedness to be determined.

There were seventy-five displaced supracondylar fractures and eighty-seven total fractures in the cohort. Seven patients (9%) sustained twelve additional fractures. All seven patients suffered ipsilateral distal radial and/ or ulnar fractures, with complete displacement occurring in two patients all of which were ipsilateral distal radius fractures (Table 2). No patient suffered bilateral supracondylar elbow fractures. No patient sustained another fracture of another limb. One supracondylar elbow fracture was open. Nine (12%) patients had a pucker sign at the time of presentation. The pucker sign is a black and blue skin change directly over the supracondylar fracture. No patient had any additional skin bruises or traumatic lesions. Seven (9%) patients presented with an anterior interosseous nerve palsy and one presented with an additional ulnar nerve palsy. Four (5%) patients presented without a palpable radial pulse; all pulses were subsequently identified via Doppler ultrasound. No patient presented with, or developed, a compartment syndrome. The average contralateral elbow extension was -5°, average flexion was 135°, and the average contralateral carrying angle was 8°.

All seventy-five patients sustained a supracondylar elbow fracture stemming from a reported fall, including twentynine (39%) from playground equipment, ten (13%) from furniture, six (8%) while playing sports, three (4%) from falling down the stairs, and three (4%) from riding bicycles. The remaining twenty-four (32%) patients fell performing miscellaneous activities, including: running and tripping, falls from a toy ball, sled, tree, wagon, fence, bounce house, mini-van, deck, battery-powered ride-in car, all-terrain vehicle, and go-cart. The site of the fall was varied. Thirtyfive fractures (47%) occurred at the child’s home, thirty (40%) on school grounds, four (5%) in a gymnasium, four (5%) in a park, one at a farm show, and one in a parking lot (Figures 1 and 2). 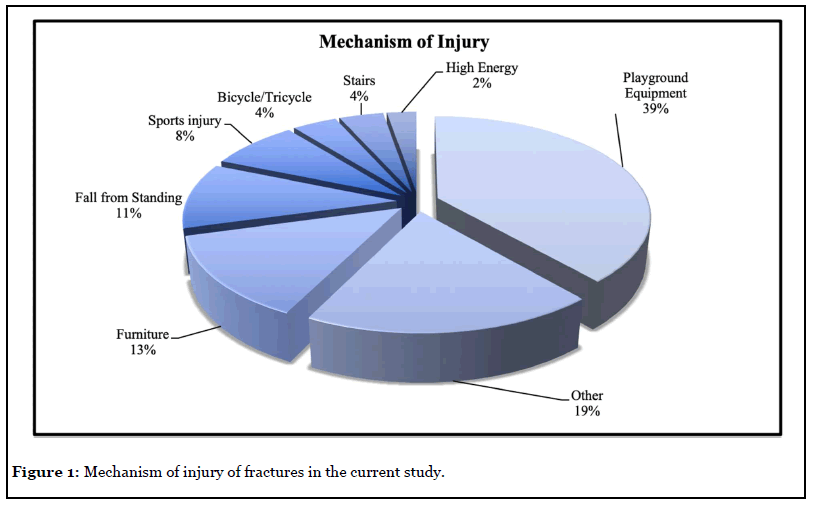 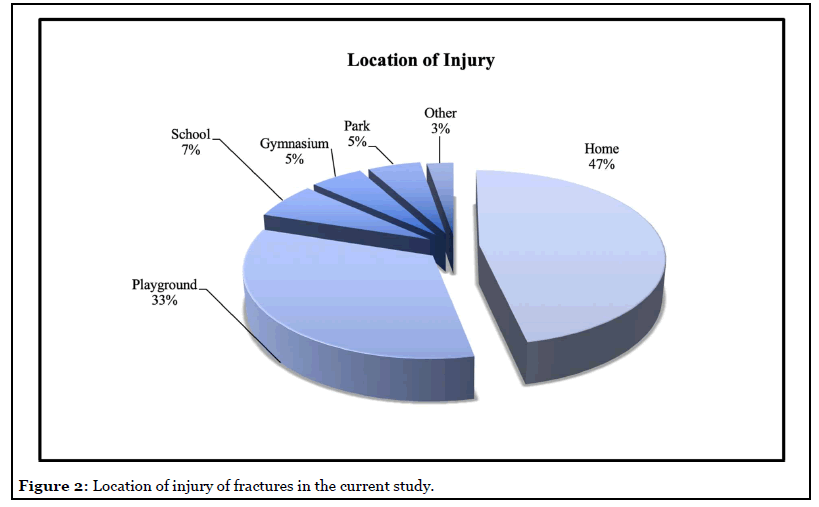 Only 1 patient, the youngest patient in the cohort at 1-year-5-months, injured from a reported fall at home during a temper tantrum, was reported for possible abuse by the referring ED doctor. The SCAN (Suspected Child Abuse and Neglect) evaluation was negative. The remaining 74 patients were deemed accidental falls after evaluation by multiple medical professionals including nurses, residents, emergency department (ED) physicians, and orthopaedic surgeons.

Although a few studies have suggested that males no longer have a higher incidence of supracondylar fractures than females [6,8,9] our population demonstrated a slight male preponderance (56 vs 44%). Nearly 60% fractured their non-dominant arm; this is consistent with Farnsworth’s findings [6]. Neurovascular injury due to stretch neurapraxia has been shown to be more likely with greater fracture displacement [17,18]. In the current study, seven children sustained a neurological injury, and four sustained a vascular injury which is presented as a loss of radial pulse (Table 2). All seven of the neurological injuries recovered with 4 months of observation, and all of the vascular injuries resolved with reduction of the fracture. In the current study, nine children presented with a pucker sign. The pucker sign is a black and blue skin bruising in the ante-cubital fossa that results from bleeding about the fracture. The pucker sign is not an indicator of child abuse [19]. No additional skin bruising, or skin lesions were noted on any patient.

Although the presence of multiple fractures in different limbs is a red flag for child abuse, the combination of a supracondylar fracture with an ipsilateral distal radius fracture is not a red flag for child abuse. The findings of the current study and a review of literature demonstrate that supracondylar fractures following a fall can present with a second fracture in the same arm in approximately 10% of cases. About 50% of the additional fractures are distal radius fractures of the ipsilateral arm [6,7]. 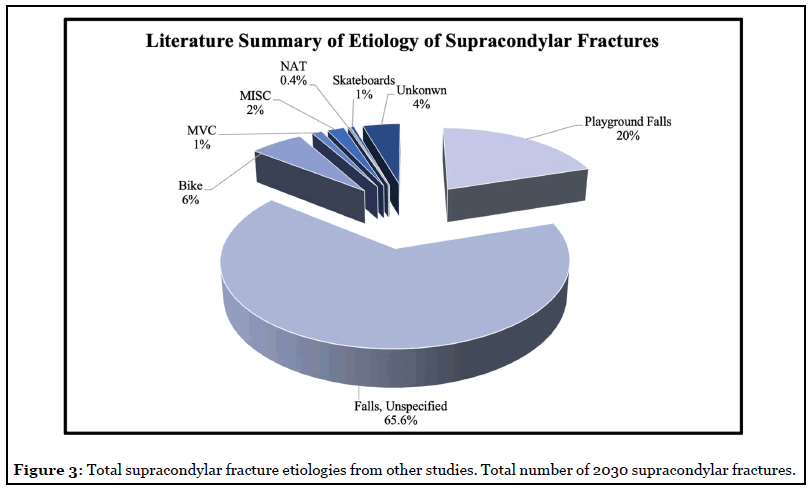 The results of the current study and literature review demonstrate that a supracondylar fracture by itself should not be a red flag for abuse. Some factors helpful for identifying pediatric abuse include a non-ambulatory infant, multiple fractures, corner fractures, additional skin bruising, an inconsistent history, and a delayed presentation [13-16]. The limitations of this study included use of a single surgeon’s sample, the retrospective design, inclusion of only displaced fractures undergoing surgery, and small sample size.

Pediatric elbow supracondylar fractures occur from accidental falls while children are at play. The mechanism typically involves a fall on the outstretched hand and hyperextension of the elbow resulting in a fracture of the thin humeral cortex at the supracondylar location.

Each author certifies that he or she has no commercial associations (eg, consultancies, stock ownership, equity interest, patent/licensing arrangements, etc) that might pose a conflict of interest in connection with the submitted article.

This study was an IRB approved study conducted at the Milton S. Hershey Penn State Medical Center. The approval document has been provided.

This study was conducted solely out of The Penn State College of Medicine at Milton S. Hershey Medical Center.