Copyright: © 2021 Chamagne M, et al. This is an open-access article distributed under the terms of the Creative Commons Attribution License, which permits unrestricted use, distribution, and reproduction in any medium, provided the original author and source are credited.

A 33-year-old pregnant woman at 26 weeks gestation presented with abdominal pain in the right iliac fossa. She had a history of a left ovarian cyst. The current pregnancy was normal. The patient was apyretic. Laboratory testing revealed no inflammatory syndrome (leukocyte count of 10G/L and pro c reactive levels were 8 mg/L). In the absence of a diagnosis and given a non-contributory abdominal ultrasound, MRI was requested and revealed a right ovarian teratoma measuring 55 × 73 mm. A surgical exploration of the abdominal cavity (Mc Burney point) using tocolytic treatment with atosiban and after fetal maturation by intramuscular injection of betamethasone 12 mg was made. Pelvic exploration performed under general anesthesia found a right adnexal torsion. Anatomopathology found a 6 cm right ovarian cystic mature teratoma with no signs of malignancy. The rest of the pregnancy went smoothly. The patient gave birth at 39 SA + 4 days to a healthy boy weighing 3080 g.

Adnexal torsion during pregnancy is a rare pathology. It is difficult to diagnose because of anatomical changes induced by the increase in uterine volume. The objective of this work is to present an adnexal torsion case at the end of the second trimester, and to propose a management strategy for this situation.

Our case involved a 33-year-old patient who gave birth to a healthy child in 2017. Her surgical history showed a left ovarian cyst with a coelioscopy performed in 2015.

The pregnancy was normal. The patient was consulted at 26 weeks of amenorrhea (SA) + 2 days of lateral abdominal pain in the right iliac fossa. The patient was apyretic. A clinical examination found no uterine contractions; the fetal heart rate was normo-oscillating and normo-reactive, the cervix was clinically closed, measuring 43 mm by an endo-vaginal ultrasound. The fetus was estimated to weigh 1054 g (90° to 97° percentile according to the “Collège Français d’Echographie Foetal”). The blood analysis showed no inflammation (leukocytes 10 g/l and protein c reactive at 8 mg/l). The persistent pain was not relieved with level 2 analgesics and required a titration of morphine without point of call found; thus, an abdominal ultrasound was carried out. Liver and kidney scans were normal, the appendix was not visualized. Magnetic resonance imaging (MRI) showed a right ovarian teratoma 55 mm x 73 mm in size, with an ovary projected forward to the sub-parietal (Figure 1a). 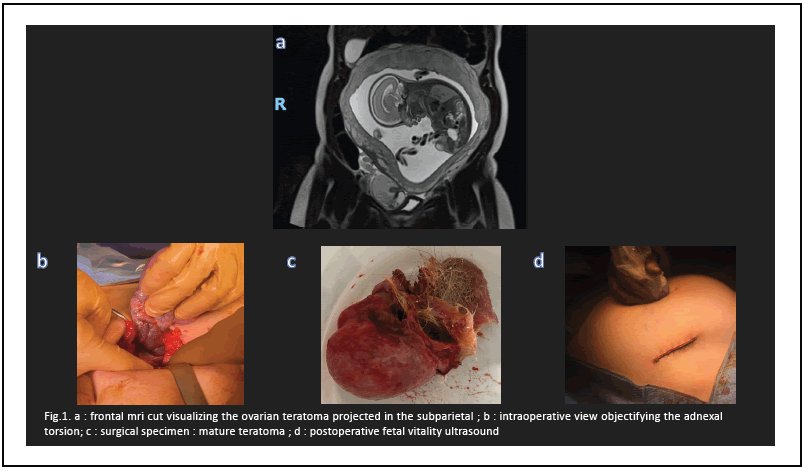 After discussing the case with obstetric pediatricians, it was decided to perform a surgical management. The patient benefited up-stream from Atosiban® tocolysis and early fetal pulmonary maturation by intramuscular injection of betamethasone 12 mg. The procedure was performed under general anesthesia and was initiated 11 hours after patient hospitalization and 13 hours after the onset of pain.

An ultrasound scan of the cyst showed that it was possible to use a McBurney incision. Exploration of the pelvic cavity found a right adnexal torsion (Figure 1b) on a dermal-like cyst. After detorsion and peritoneal cytology, a cystectomy was performed with scissors and an electric scalpel. At the end of the procedure, the ovary was still well vascularized allowing its preservation. The results of pathological anatomy concluded that there was a 6 cm right ovarian cyst containing a mature teratoma with no evidence of malignancy (Figure 1c).

Surgical procedures were simple; the post-operative ultrasound scan showed both adequate fetal vitality (Figure 1d) and satisfactory fetal heart rate recordings. Tocolysis was continued for a total of 48 hours during fetal maturation and with a second injection of 12 mg betamethasone 24 hours after the first dose. Patient exited J4 from surgery. The rest of the pregnancy went smoothly. At 39 SA + 4 days, following spontaneous labor, the patient gave birth to a healthy boy weighing 3080g.

The prevalence of adnexal torsion masses during pregnancy has been estimated to lie between 1/76 and 1/2328 births [1]; torsion is a rare pathology with an incidence of 1/5000 pregnancies [2]. Most masses discovered during the first quarter of pregnancy are functional and resolve spontaneously in the second quarter. Persistent masses are usually functional cysts or mature teratomas that are borderline or cancerous in 2-6% of cases [3].

Clinical presentation is not specific and usually is associated with abdominal pain, nausea, vomiting with or without fever and leukocytosis [4]. The reference imaging exam is an ultrasound (endovaginal in the first trimester and pubic supra in the second and third trimesters). These can demonstrate the appearance of a heterogeneous mass or an enlarged ovary. MRI can be performed after a noncontributory ultrasound to determine signs of torsion and eliminate differential diagnoses [5]. Additional information from this examination prompted surgical indication while the size of the lesion found guided the procedure.

Surgical treatment by coelioscopy is to be considered in first line up to 17 SA by favoring the first way open coelioscopy type and using low insufflation pressures (less than 12 mm/Hg). However, recent studies have shown that coelioscopy can be performed safely until the third trimester of pregnancy [6,7]. A series of 34 cases of coelioscopy during pregnancy contained one laparoconversion in 4 cases of twisted appendix supported after 17 SA with a favorable outcome of pregnancy in 100% of cases [8].

Coelioscopy allows a decrease in the length of hospitalization, post-operative pain, and uterine mobilization compared to laparotomy. Since, it is not recommended to establish tocolysis in the absence of the threat of premature birth risk, we decided, given the term, the foetal viability and the risk of uterine contractions induced by pain; to implement treatment by Atosiban®.

Accordingly, both Mathevet et al. and Azuar et al. systematically applied tocolysis in this situation starting from 24 SA [8,9]. Conversely, Pearl et al. believed that tocolytics should not be administered prophylactically [10]. While there is abundant literature on adnexal torsion during pregnancy, authors rarely specify whether fetal maturation by corticosteroid therapy in the event of surgery after 24 SA is performed. In our case, we have for the same reasons mentioned that when tocolysis is carried out, a cure with corticoids should be administered. A posteriori this treatment was not useful, but it was difficult to assess at the time of the management of the risk of prematurity. A retrospective study of 60 ovarian masses, operated during pregnancy found a 9% premature delivery rate [3].

Adnexal torsion is a rare pathology in the second and third trimesters of pregnancy, due to increased uterine volume and decreased ovarian mobility. However, it is potentially a source of high maternal morbidity, such as ovarian necrosis. The clinical picture is not specific, and the surgical exploration of the abdominal cavity should not be delayed on the simple argument of an ongoing pregnancy. This surgical exploration may confirm or deny the diagnosis. We propose, the main issues to be considered in the management strategy of adnexal torsion are first the approach, the establishment of a tocolysis and in case of fetal viability induce fetal maturation by corticosteroids.

The authors declare that they have no conflict of interest.