ZBP1, a dsRNA Sensor for Cell Death and Inflammation

Copyright: © 2021 Mo W, et al. This is an open-access article distributed under the terms of the Creative Commons Attribution License, which permits unrestricted use, distribution, and reproduction in any medium, provided the original author and source are credited.

ZBP1 has aroused a wide interest since it was identified as the first cytosolic dsDNA sensor ahead of the finding of cGAS in 2013. However, the investigations on ZBP1 declined when researchers found the binding of ZBP1 with dsDNA is not absolutely required for the activation of innate response. Recently, the significance of ZBP1 was reemphasized as a key regulator of innate immunity. Here we reviewed the emergence of evidence on how ZBP1 promotes cell death and inflammation upon physiological and pathological challenges.

TNFs promote programmed cell death (PCD), including apoptosis and necroptosis under certain circumstance [1-4]. Evidence showed that TNF-induced cell death is the pathology of certain inflammatory diseases [4]. However, some inflammation caused by cell death are TNF-independent. Recently, several groups reported that ZBP1, once thought to be a DNA sensor, triggers PCD and inflammation upon virus infection or endogenous retrovirus activation [5-8]. Understanding the pathologic role of ZBP1 may contribute to the treatment of incurable inflammation in clinic.

The Tale of ZBP1

ZBP1 was named DLM-1 when it was first cloned as a tumorassociated protein in 1999 [9]. ZBP1 was highly expressed in the peritoneal lining tissue of ovarian ascites tumors and believed to mediate the process of host responses to tumorigenesis [9]. Two years later, Rich group reported that the N-terminus of DLM-1 contains two Zα high affinity binding domains, which is highly conserved with that of RNA editing enzyme ADAR1 by crystal structure comparison [10]. Crystal structure of ZαDLM-1 binding with left-handed Z-DNA gives DLM-1 another name ZBP1 (Z-DNA Binding Protein 1) and provokes intensive investigations on dsDNA-sensing function of ZBP1 physiologically and pathologically. ZBP1 was called DAI and once considered as the first cytosolic DNA sensor in 2007 when cGAS had not been identified yet [11]. Taniguchi lab and others reported the binding of ZBP1 with cytosolic dsDNA, which activates innate immune response through type-I interferon and NF-κB pathways. Takaoka further showed the requirement of DAI for the production of type I interferon in L929 cells upon HSV infection, however, in most of the viral infected or plasmid transfected cells, the capacity of DAI to combine with B-DNA and plasmid DNA is indispensable for cells to activate innate immunity because of redundant cytosolic B-DNA sensors, such as cGAS and AIM2 etc. [12-14]. Therefore, in this review, we call it ZBP1 hereinafter.

In addition to two Zα domains at the N-terminal for nucleic acid (NA) binding, its c-terminus domain (CTD) recruits IRF3 and TBK1 to activate the type I IFN pathway (Figure 1) [11]. There are two RHIMs located in the middle of ZBP1, which were first identified as sites for ZBP1 recruitment of RIP1 and RIP3 to activate NF-κb in 2008 (Figure 1) [15]. RIP proteins, a family of receptor-interacting serine/threonine-protein kinases, bind with ZBP1 or with each other by their RHIM domains. RIP1/RIP3 play an essential role in programmed cell death, especially in TNF -driven necroptosis [16], which has been well documented over the past two decades [17-19]. Thus, activated ZBP1 recruits RIP3 for necroptosis; or RIP3/RIP1 and Caspase 8 to mediate apoptosis [20]. So far, ZBP1 is the only nucleic acid sensor that contains RHIM domains [18,21] to directly trigger cell death under extracellular or intracellular stimuli. 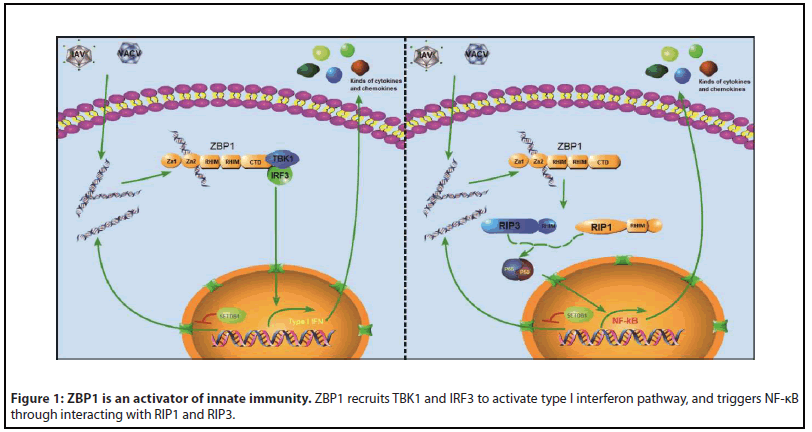 As a cytosolic NA sensor, the function of ZBP1 was discovered largely during viral infection. ZBP1 is an activator of innate immunity in response to infection of DNA or RNA viruses, such as vaccinia, Human Cytomegalovirus, IAV etc. [20,22,23]. IAVinfected MEFs (mouse embryonic fibroblasts) or BMDMs (bone marrow derived macrophages) undergo ZBP1-dependent necroptosis, apoptosis and pyroptosis, which is the strategy that the host defense controls the dangerous infections by eliminating the places for viral production [20,24]. Therefore, under the circumstances of IAV infection, mice that are deficient of ZBP1 or with a defect in ZBP1-triggered cell death suffer from severer inflammation and die in higher ratio of lethality [20,25]. ZBP1 was upregulated by viral infection, but it is not sufficient for the induction of ZBP1-triggered cell death. For example, M45 was a Murine Cytomegalovirus Vironassociated protein, which contains a RHIM domain that it can inhibit ZBP1-triggered necroptosis. In primary MEFs infected with MCMV-M45 RHIM mutation, ZBP1 triggered necroptosis was blocked when the Zα domain of ZBP1 was absent [26], suggesting the Zα domain is also required for ZBP1-driven cell death in MCMV-infected cells. The answer of ZBP1 activation upon viral infection is revealed last year. A study reported that DVGs was released from rapid replication of IAVs genome, which formed Z-RNAs that combined to the Zα domain of ZBP1 [5]. Then the NA bound ZBP1 recruited RIP3 via their RHIM domains for cell death. It should be noted that cell death is not the only destination upon ZBP1 activation by viral infection. Metabolic reprogram by ZBP1-IRF1-IRG1 axis was reported in ZIKA-viral infected neurons to eliminate virus and keep neurons alive [27]. In addition to response to viral infection, numerous studies reported that ZBP1 also plays a role against the infections of bacteria and fungi with an unclear mechanism [28,29].

RIP1 promotes TNF-triggered necroptosis in a kinase activitydependent manner [30]. Unexpectedly, four groups found that RIP1 blocks early embryonic lethality and inflammation, and it maintains the homeostasis of skin and intestine against inflammation and cell death, which implies that RIP1 plays a negative role in TNF-independent necroptosis [31-34]. The following work in 2016 by Lin et al. and Newton et al. reported that the TNF-independent necroptosis which can be halted by the RHIM of RIP1 is ZBP1-dependent [35,36]. Interestingly, the Zα2- mutated ZBP1 mice are as resistant as ZBP1 deleted mice on skin inflammation caused by RIP1-RHIM mutation [8], which suggested that there should be some endogenous ligands that physically or pathologically ignited ZBP1 via Zα domain in non-viral infected cells. In 2020, Wang et al. found the key in intestinal epithelial cells with reactive endogenous retroviruses (ERVs) by Setdb1 deletion [7]. SETDB1, a histone H3 lysine 9 (H3K9) trimethylation methyltransferase, maintains the H3K9me3 modification along genome to silence the TEs ( transposon elements) against genome instability [37]. ERVs (endogenous retroviruses) are one of the TEs and occupy nearly 10% of the genome [7]. Setdb1 deficiency initiates ZBP1- triggered necroptosis in intestinal stem cells. The death could be blocked by Zα mutation of ZBP1, indicating the binding of death signal to Zα domain of ZBP1. It turns out the dsRNAs transcribed from deactivated ERVs are the ligand of ZBP1 for epithelial cell death. Although it is yet unclear whether the ERVs-dsRNAs form Z conformation or not, the conclusion that ERVs-dsRNAs are the endogenous ligand of ZBP1 is supported by another group. They reported that death of keratinocytes and skin inflammation by RIP1-RHIM mutation were triggered by the interaction between trace ERVs-dsRNA and ZBP1 [8].

From the perspective of infection by exogenous ligand, to counter the ZBP1-RIP3 mediated cell death, various strategies have been adopted by virus. ICP6, a RHIM-containing protein from HSV1, promotes RIP3-mediated necroptosis in murine cells but inhibits necroptosis in human cells [38,39]. Vira, another viral-RHIM protein transcribed from a viral gene M45 of murine cytomegalovirus (MCMV) competes with RIP3 for the binding to ZBP1 and suppresses ZBP1-RIP3-mediated necroptosis (Figure 2) [26]. Different from HSV1 and MCMV, vaccinia virus (VACV) blocks ZBP1-triggered necroptosis by a strategy to compete for viral nucleic acid with ZBP1 by a Zα domain and a dsRNA binding domain-containing protein E3L (Figure 2) [40]. Both of nucleic acid binding domains collaborate to inhibit ZBP1-triggered necroptosis, whose mutations result in cell death by VACV infection [41]. It is such a marvelous and delicate revolution of competition between the host and pathogen that are superbly present in the ways of viral regulation on ZBP1-RIP3 mediated cell death. To the respect of activation by endogenous ligand, RIP1 inhibits the ZBP1-RIP3 necroptosis pathway by its RHIM domain [36]. It has been reported that ZBP1-triggered necroptosis can be induced by IFNs in either RIP1, Caspase 8 or FADD deficient L929 cells (Figure 2) [42]. In the FADD/Caspase 8 knockout intestinal epithelial cells, epithelial homeostasis broke down with intestinal inflammation which are related with ZBP1-triggered cell death [43]. It implies that RIP1/FADD/ CASPASE 8 may function as a negative regulator of ZBP1-RIP3 cell death. However, the detail of the protective mechanism against cell death remains to be explored. Recently, several individual studies revealed that RNA deaminase ADAR1 edits endogenous Z-form RNA [44-46], suggesting ADAR1 might be a negative regulator by degradation the ligand of ZBP1. 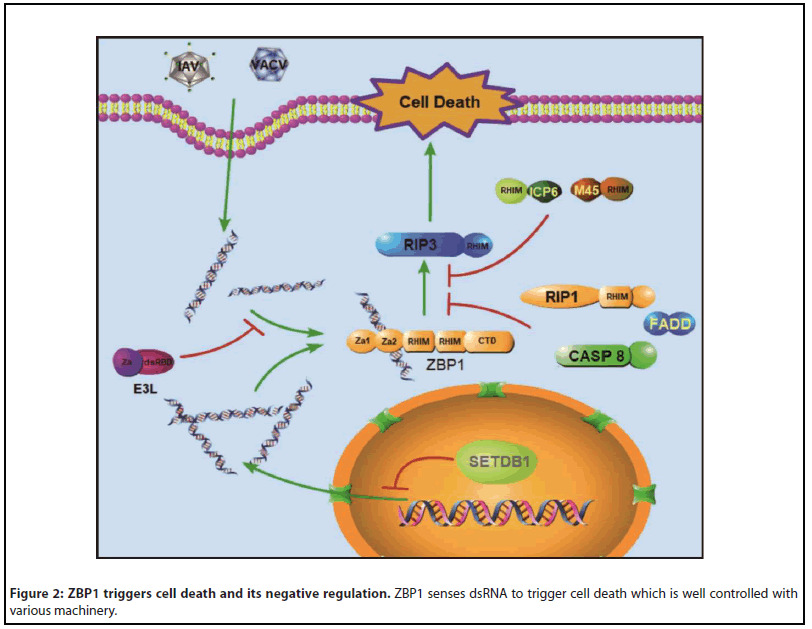 PAN-optosis refers to the collective activation of apoptosis, necroptosis and inflammasome/pyroptosis, which occurs upon IAV infections and can be mediated by ZBP1 [47]. In the MEFs infected by IAV, apoptosis and necroptosis occur in different cells. Pyroptosis takes place in the infected BMDMs, which was blocked by ZBP1 deletion or NLRP3 deletion [24]. But the connection between ZBP1 and NLRP3 inflammasome is unknown yet. ZBP1 could assemble PAN-optosome including RIP3, RIP1, FADD and Caspase8 to trigger PANoptosis [6]. Caspase 6 was reported to regulate the assembly of PAN-optosome. Although IAVs infections lead to ZBP1- induced PAN-optosis, whether the ERVs-dsRNAs share the same story is unclear. Deepening the study of ZBP1-triggered endogenous cell death in uninfected cell will benefit a lot for the understanding and clinic treatment of related autoinflammation disease [48]. Different types of cell death have different physiological influences. In IAVs infection, ZBP1- triggered apoptosis is helpful for viral clearance and protection of the host. In contrast, ZBP1-initiated necroptosis provokes the acute inflammation and lethality [5]. Understanding the key steps that determine the cell fate under ZBP1-triggered PAN-optosome would benefit infection control as well as the compromise of the hyperactivation of innate immunity.

Lacking the binding pockets in structure, ZBP1 is difficult to be suppressed by small molecular compounds. The strategy of manipulating the ZBP1 should be more focused on the ligand that activates ZBP1 or proteins that regulates the activation of ZBP1 positively or negatively. Screening the compounds that targeting the dsRNA degradation system may have good prospects in inflammatory disease and tumor immunity.