Copyright: © 2021 Gao L, et al. This is an open-access article distributed under the terms of the Creative Commons Attribution License, which permits unrestricted use, distribution, and reproduction in any medium, provided the original author and source are credited.

Unesbulin (also known as PTC596) is novel tubulin binding drug being developed for the treatment of cancers. The drug binds to the tubulin colchicine binding site to block tumor growth by inhibiting microtubular formation leading to mitotic G2/M phase cell arrest and cell death. Importantly, in contrast to the majority of other tubulin binding compounds, unesbulin is not a substrate for p-glycoprotein transporter and can be administered orally as a tablet. Preclinical studies indicate that the drug has activity both against solid tumor and haemotologic cancers. A recently completed phase 1 study evaluated the safety and pharmacokinetics (PK) of unesbulin in subjects (aged = 18 years [N=31]) with advanced solid tumors. Patients received eight doses per 4-week cycle schedule, and doses were escalated from 0.65, 1.3, 2.6, 5.2, 7.0, to 10.4 mg/kg. Unesbulin was rapidly absorbed and for doses between 0.65 and 7.0 mg/kg reached a maximum plasma concentration 2 to 4 hours after dosing. Area under the plasma concentration–time curve increased proportionally with body weight–adjusted doses and no accumulation occurred after multiple administrations up to 7.0 mg/ kg. For all doses, unesbulin had a terminal half-life ranging from 12 to 20 hours. Overall, unesbulin was well tolerated. The incidences of neutropenia and thrombocytopenia were low; only one patient treated with 10.4 mg/kg experienced dose-limiting toxicity of neutropenia and thrombocytopenia, both of which were reversible. These data support the further development of unesbulin in treating cancers. Currently, several ongoing clinical trials are investigating the drug in other cancers including in women with ovarian cancer, in patients with advanced leiomyosarcoma, and in children with diffuse intrinsic pontine glioma and high-grade glioma.

A hallmark of all cancers is the rapid rates of cell division associated with tumor growth. Rapid cell division is dependent upon the assembly and disassembly of microtubules, which are essential components of the mitotic spindle and are critical for the movement and separation of chromosomes during cell division [1]. Microtubules are dynamic filaments that are composed of αβ-tubulin heterodimers. Microtubules also play key roles in determining cell shape, cell motility, and transportation of organelles within the cell. Blocking normal microtubular function leads to a failure of cells to progress through cell division and ultimately results in cell death.

Drugs known as anti-tubulins block cell division by disrupting mitosis through targeting the assembly and disassembly of microtubules and have been of enormous value in treating diverse forms of cancer [2,3]. Certain compounds, such as taxanes, docetaxel, and paclitaxel, prevent microtubule assembly [2]. Others, such as vinca alkaloids (vinctristine and vinblastine), block tubulin polymerization [2]. Specific sites on tubulin have been identified to which the various ligands bind. The sites bind taxanes, vinca alkaloids, laulimalide/peloruside, pironetin, maytansine, and colchicine. Although, drugs have been approved for treatment of cancer that bind to the taxane, vinca, and maytansine sites, none have yet been approved for treatment of cancer that bind to the colchicine, laulimalide/peloruside, or pironetin sites. It is possible, the drugs that bind to these other sites will have different characteristics with regard to PK, efficacy, and safety than the currently approved drugs.

Although these anti-tubulin drugs have been extensively used over many years to treat cancer in the clinic, antitubulins are clearly imperfect compounds that can limit their use [2]. These drugs tend to have harmful and serious side-effects including neuropathy, myelosuppression, and gastrointestinal distress [1]. The neuropathy following administration of taxanes and vinka alkaloids is often irreversible due to axonal cell death [4]. These clinically relevant limitations highlight the great medical need to develop alternative anti-tubulin drugs.

Many anti-tubulin drugs are substrates for the p-glycoprotein transporter (P-gp) so that they are effluxed from the brain, limiting their use in treating cancer in the central nervous system or organs with high expression of P-gp [5]. Moreover, cancer cells may develop resistance to these chemotherapeutic agents by upregulating P-gp expression further decreasing the intracellular drug concentration and effectiveness [5]. The impact of this on treatment response may be broad as the P-gp drug efflux pump is expressed in a variety of tissues including the intestine, liver, kidney, and the capillary cells that form the blood-brain barrier [5].

The clinical utility of anti-tubulin agents is also often limited by their being administered intravenously. This is necessary, in part, to their high molecular weight, an affinity for the P-gp drug efflux pump in the gut, and vulnerability to first pass hepatic elimination, primarily by cytochrome P450 CYP3A4 [6-8].

The potential utility of unesbulin in treating cancers is supported by the fact that it has demonstrated significant activity in a number of preclinical models of solid tumors and haemotologic cancers. Unesbulin has shown effects in models of pancreatic ductal cancer [10], glioblastoma [11], and diffuse intrinsic pontine glioma (DIPG) [12]. Currently, although progress has been made in treating these cancers, they are still associated with a low 5-year survival rate of <5% [13-15]. Preclinical analysis has also shown that unesbulin is active against in vivo models of multiple myeloma [16] and acute myeloid leukemia (AML) [17-19]. Both cancers are currently difficult to treat, particularly in the relapsed/refractory setting and novel treatments are needed for later stage and high-risk disease.

Unesbulin was initially identified by its ability to lower the activity of the B-cell-specific Moloney murine leukemia virus insertion site 1 (BMI1) protein and to block cancer cell proliferation [9,20,21]. BMI1 is necessary for the selfrenewal of cancer stem cells [22-25]. However, subsequent studies suggest that the effect of unesbulin on BMI1 is likely through the ability of the drug to block the G2/M phase in mitosis; although, other mechanism cannot be ruled out.

Unesbulin binds to the colchicine binding site on tubulin to inhibit tubulin polymerization [26]. The colchicine binding site is located at the interface of the tubulin monomers of the heterodimer and is adjacent to the GTP binding site of α-tubulin and is the most important pocket for potential tubulin polymerization destabilizers [26]. Binding this site blocks polymerization of microtubules by inhibiting the curved-to-straight conformational transition required for microtubule formation [27]. Unesbulin structurally and pharmacologically differs from colchicine and other tubulin binding compounds that bind the colchicine site as it is an amine substituted pyrimidine compound that lacks the trimethoxyphenyl moiety (Figure 1). 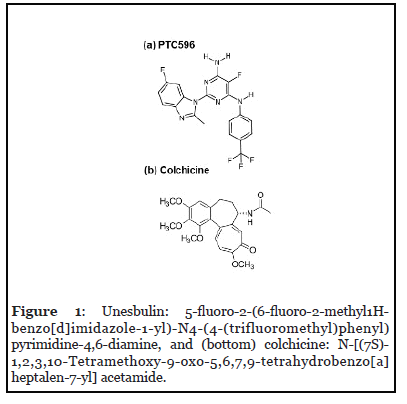 Unesbulin has several advantages over other antitubulin drugs as it (a) can be administered orally as a simple suspension; (b) is not a P-gp substrate; (c) is well tolerated in cancer patients; and (d) has a wellcharacterized pharmacokinetic (PK) profile that allows for the establishment of the PK/pharmacodynamic (PD) relationship.

Based on the promising preclinical results indicating unesbulin may have anti-cancer activity, a phase 1 study (PTC-596-ONC-001-AST; Clinical Trial Identifier; NCT02404480) was performed to assess the safety and PK of unesbulin in subjects with advanced solid tumors (Table 1) [28]. Eligible subjects (N=31) were ≥ 18 years of age, diagnosed with metastatic, unresectable solid tumor that had not responded to at least 1 line of standard therapy or in which no standard therapy existed, and who had a life expectancy >3 months. The median age was 62.5 years (range 27 to 81 years) and approximately 60% were female. Most patients (64.5%) had Stage 4 cancer.

Patients received unesbulin orally bi-weekly during 4-week cycle schedule for a total of 8 doses. The initial dose was based on the human equivalent dose established by pre-clinical studies in rats that showed 40 mg/kg twice weekly was approximately the severely toxic dose in 10% of rats (STD 10). Doses were escalated from 0.65, to 1.3, 2.6, 5.2, 7.0, and 10.4 mg/kg.

Unesbulin was rapidly absorbed, and a maximum plasma concentration (Cmax) was achieved approximately 2 to 4 hours post dosing for doses between 0.6 and 7.0 mg/kg (Figure 2) [28]. Cmax was dose proportional until doses levels were >2.6 mg/kg (Figure 3). Area under the plasma concentration–time curve increased proportionally with body weight–adjusted doses. No accumulation of unesbulin occurred with the bi-weekly dosing regimen even through the highest dose tested of 10.4 mg/kg. Excluding the 10.4 mg/kg dose, the terminal half-life ranged from 12 to 15 hours at all doses; at 10.4 mg/kg the half-life was approximately 20 hours. 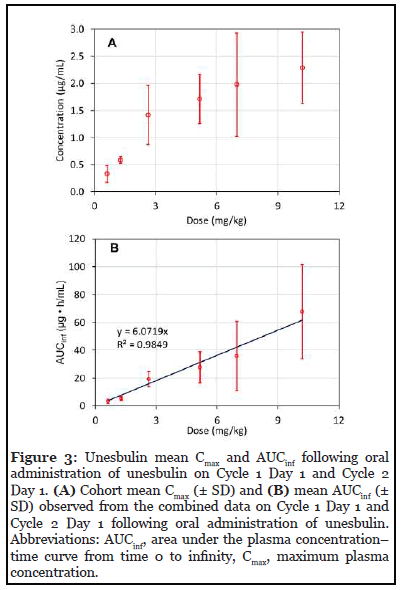 Generally, unesbulin was well tolerated, with the most common drug-related treatment emergent adverse events being mild to moderate gastrointestinal symptoms, such as diarrhea (54.8%), nausea (45.2%), vomiting (35.5%), and fatigue (35.5%) [28]. Only 1 subject, who received the 10.4 mg/kg dose, had dose-limiting toxicity of neutropenia and thrombocytopenia. Importantly both of these adverse events were reversible. The low level of neutropenia and the lack of peripheral neuropathy suggests that the safety profile of unesbulin may differ from that other anti-tubulin drugs.

The study was not powered to evaluate the efficacy of unesbulin in this diverse subject population. No subjects showed tumor response as assessed by Response Evaluation Criteria in Solid Tumors version 1.1. The observation of stable disease as being the best overall response was observed among 7 subjects, with 2 of the 7 subjects receiving the study drug up to 16 weeks. No association was observed between stable disease and tumor type.

Unesbulin is currently being investigated in several ongoing clinic studies. An open label phase 1b doseescalation study (NCT03206645) is evaluating the safety, tolerability, and PK of the drug when combined with and after conventional chemotherapy and maintenance therapy in women with epithelial, fallopian tube, or primary peritoneal cancer that was previously untreated. A phase 1 study (NCT03761095) is investigating the maximum tolerated dose and recommend phase 2 dose of unesbulin in combination with dacarbazine in the treatment of advanced leiomyosarcoma. The study will also evaluate the overall safety profile of the combination of unesbulin with dacarbazine. Another phase 1 study (NCT03605550) is evaluating the safety and efficacy of unesbulin in children with newly diagnosed DIPG and high-grade glioma.

In conclusion, anti-tubulin drugs have been used for years to treat cancer; however, those currently approved have significant limitations that can impact their use in the clinic. Unesbulin differs from these drugs and has compelling pharmacological properties in that it:

• Is not a substrate for P-gp

• Has a predictable PK

• Is well tolerated, with a very low frequency of reversible neutropenia and thrombocytopenia.

• Can be administered orally as a tablet.

These properties may in part depend upon the novel chemical structure and pharmacology of the drug and suggest that unesbulin may have unique characteristics in treating cancers that may result in clinical advantages compared with the currently approved anti-tubulin drugs.

R.K, L.G., M.W. K.O’K, and E.G. are employed by PTC Therapeutics Inc. and have received salary compensation for time and effort and hold financial interest in the company.

This work was funded by PTC Therapeutics Inc.