Copyright: © 2019 Yepes JCR, et al. This is an open-access article distributed under the terms of the Creative Commons Attribution License, which permits unrestricted use, distribution, and reproduction in any medium, provided the original author and source are credited.

Myocardial perfusion imaging is a nuclear medicine imaging technique that allows to make an approach to the coronary condition in patients with moderate probability to have coronary artery disease. 99mTc MIBI myocardial perfusion is one of the most common techniques in nuclear medicine clinical practice. Extracardiac accumulation of the tracer is relatively common, and can be seen in certain tumors with high metabolic rate, due to the radiotracer’s mitochondrial preference. We present a case report of an unusual finding in a myocardial perfusion scan related to an abnormal uptake of the radiotracer in a mediastinal mass which was consistent with thymoma.

The differential diagnosis of a mediastinal mass includes benign and malignant etiologies like lymphomas, thymic tumors, thyroid goiter, infections such as tuberculosis, chronic granulomatous disorders such as sarcoidosis, germ cell tumors, among others. Based on its location, they can be classified as anterior, medium or posterior. Thymic epithelial cell tumors are rare, but thymomas constitute 20% of all the mediastinal masses, and up to 50% of all anterior mediastinal masses. It is estimated that its prevalence varies between 0.6% to 1.2% from all the malignant tumors. The incidence reported in US is 0.13 of every 100,000 people per year, with no differences in gender, characterized by slow growth, that affect the fifth decade of life, reaching its highest peak at 70 years old [1]; about 50% of the patients refer symptoms related to the tumor and it is normally found as an incidental finding in radiologic tests [2].

We present a 72 years-old patient who refers dyspnea which has evolved from large to medium effort in a lapse of 5 months; the patient has past history of controlled hypertension with no other relevant diseases.

Due to the dyspnea worsening, a myocardial perfusion test with 99m9Tc MIBI (methoxyisobutylisonitrile) was requested. It was practiced at our institution as a two day protocol myocardial perfusion imaging. We injected 10 mCi 99mTc MIBI intravenously. We used a GE dual head gamma camera system, under a standard cardiac protocol for acquisition with a 64 x 64 matrix, a low energy high resolution collimator and gated SPECT analysis. We also made attenuation correction analysis. 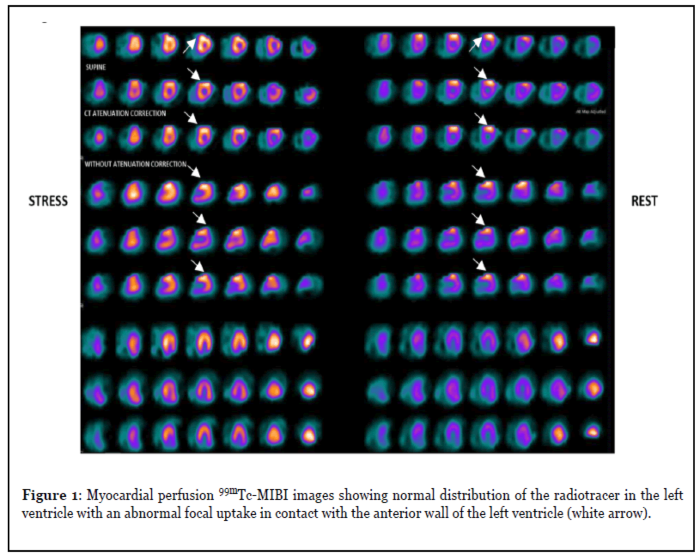 Because of an altered cardiac morphology observed during the analysis of the images, a second acquisition was made by using a hybrid image technique with Spect/ CT (Figures 2 and 3). 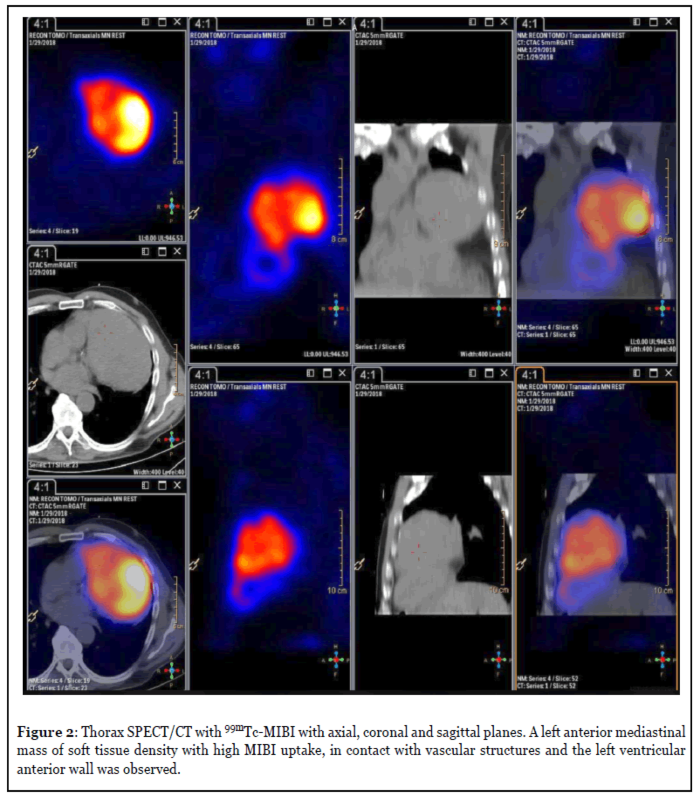 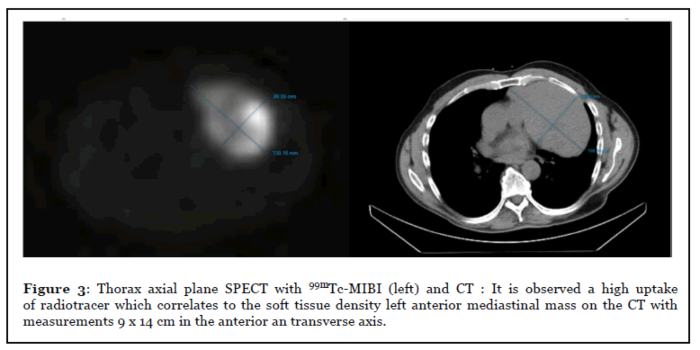 We could identify a mediastinal mass causing the high MIBI uptake in the upper chest with soft tissue density which anatomopathological analysis confirmed thymoma.

Our results let the clinicians conclude that the patient dyspnea was of compressive origin, related to the mediastinal mass with no evidence of coronary artery disease.

The patient underwent a mediastinal mass resection by the Oncology Thoracic Surgery team, and it was confirmed as an AB Thymoma (WHO classification). Given the direct contact with important vascular structures complete resection could not be achieved and radiation therapy was ordered.

After surgery, the dyspnea completely disappeared and the patient is now under strict controls with the thoracic surgical oncology team.

99mTc-MIBI is one of the main tracers used in myocardial perfusion techniques; the mechanism of uptake is given by passive transmembrane transport with high avidity by the mitochondria because of the negative membrane potential [3].

It presents high affinity for cytosolic proteins; hence it tends to accumulate at myocardial tissue. It has low lung uptake; hepatic clearance is seen in the first two hours. Thyroid and salivary gland uptake is also seen, depending on the mitochondria levels of this organs [4], non-cardiac uptake varies in the lungs, breastfeeding breast, liver, gallbladder and intestine [5] because of this radiotracer’s normal biodistribution.

We should keep in mind pathological extra cardiac uptake of this tracer that could guide towards benign and/ or malignant lesions and/or infectious and non-infectious lesions, that could explain the patient symptoms, as it occurred in our case.

The extracardiac pathological uptake of the tracer could be explained by benign and malignant etiology and/or infectious and/or non-infectious diseases; the reason why MIBI has a relative tumor uptake is not well elucidated, but it is thought to be because of a high mitochondrial activity of the tumors with increased negative potential membrane secondary to an increased metabolism in tumor cells and because of indirect causes, such as high plasmatic flow rate or augmented capillary permeability. Bibliography divergence over incidental findings has been described, in Jones et al. [7] and Zadro et al. [8] with an incidence that varies from 69% to 69.2% respectively, probably because incidental findings could be overestimated. Intense uptake has been also described in malignancies such as lung, cerebral, thyroid, breast and even bone malignancies [6].

In our case, a pulmonary primary tumor was to be ruled out, and the fusion SPECT/CT images confirmed the mediastinal origin. The main differential diagnosis includes thymoma and lymphoma [5].

Myocardial perfusion imaging constitutes one of the most requested nuclear medicine studies in the world; the study offers critic information for diagnostic and risk stratification purposes in coronary artery disease. The incidental extracardiac findings in a myocardial perfusion are frequent. The possibility to identify these lesions could lead to an early diagnosis that would benefit the patient and impacts directly in prognosis and treatment considerations especially in malignant masses such as the case we present.

The authors declare that they have no conflict of interests.