Copyright: © 2022 Cho MH, et al. This is an open-access article distributed under the terms of the Creative Commons Attribution License, which permits unrestricted use, distribution, and reproduction in any medium, provided the original author and source are credited.

There are few studies investigating the function of FCHO1 in cancer cell growth. In this mini review, we summarize recent articles on the role of FCHO1 in lung cancer progression. The reviewed articles suggest that inhibition of FCHO1 activity through the regulation of Akt signaling could be developed as a novel lung cancer treatment.

FCHO1 with truncations or mutations in the F-BAR domain was isolated from patients with T cell lymphopenia. Because these mutations severely perturb T cell receptor endocytosis, FCHO1 affects T cell and receptor-mediated immune responses [13]. Silencing of FCHO1 causes severe developmental defects in zebrafish [14]. These data suggest that FCHO1 is involved in the regulation of cell growth and development.

Overexpression of FCHO1 affects mitosis in lung cancer [15], and FCHO1 plays an important role in the G1/S phase transition and may be related to cancer, immune responses, and diseases related to growth disorders.

However, there are few studies focusing on the relationship between FCHO1 and cancer [15,17]. Recently, we studied the effect of FCHO1 on lung cancer and found that FCHO1 is overexpressed in many cancer cells [15]. We showed that overexpression of FCHO1 promotes lung cancer cell growth by activating cell division [16]. It was confirmed that the size of lung tumors was decreased in response to direct delivery of the shRNA FCHO1 in a lung cancer mouse model. In addition, FCHO1 is overexpressed in lymph node metastases from primary lung tumors [17]. These results suggest that overexpression of FCHO1 plays a significant role in the growth and metastasis of lung cancer [15,17] (Figure 1). 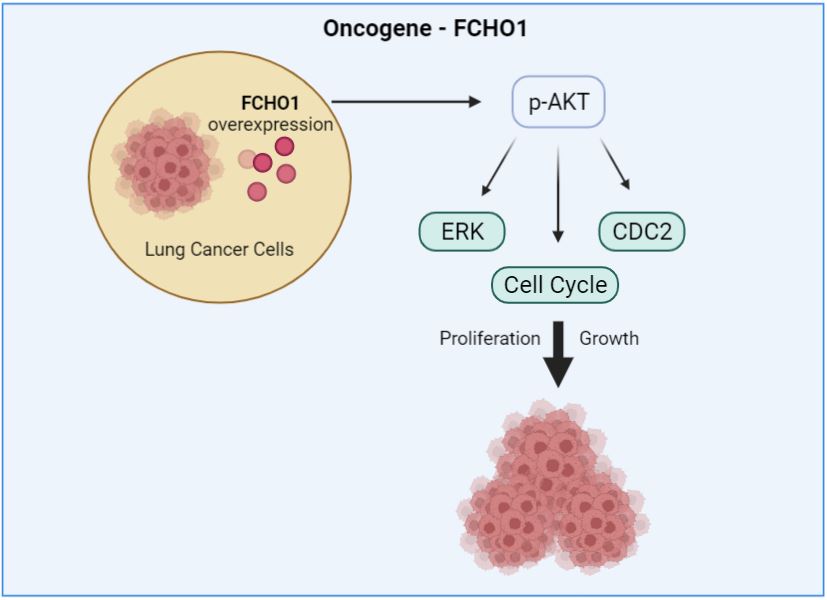 We investigated the relation between FCHO1 and the Akt signaling pathway, which plays an important role in lung cancer growth. Serine 570 of human FCHO1 is part of the kinase motif (RXRXXS) that is phosphorylated by Akt. We developed the FCHO1560-571 peptide, which inhibits Akt phosphorylation. The FCHO1 peptide containing the RXRXXS motif shows higher binding affinity to Akt, which suppresses lung cancer cell proliferation [16]. These results support that upregulation of FCHO1 in the lung promotes the progression of lung cancer by modulating cell-cycle progression.

FCHO1 was identified as a midbody protein by coimmunostaining with a midbody marker protein, although these results have not been published. Mitotic cell division is crucial for the proliferation, differentiation, and development of cells [24]. Failure to faithfully divide the genomic material, as well as cytoplasmic organelles and signaling molecules, leads to carcinogenesis and various developmental disorders [25]. Cytokinesis is a terminal stage of cell division, that results in the formation of two genetically identical daughter cells connected by an intercellular bridge containing the midbody [26]. Several major signaling pathways involved in cell proliferation, migration and cell fate have been localized to the midbody [27]. The midbody protein FCHO1 shRNA induces cell death by inhibiting lung cancer mitosis [15], suggesting that suppression of FCHO1 expression affects G1/S phase transition and could be developed as a therapeutic strategy for lung cancer [15].

Therapeutic Strategy Based on FCHO1 Function

Akt phosphorylation and cell-cycle progression are essential for cell growth [28]; therefore, Akt phosphorylation and G1/S phase regulators are targets for cancer treatment [29,30]. The role of FCHO1 in cancer and related signaling pathways has not been investigated to date, although data from our group suggest that FCHO1 overexpressed in cancer cells.

Evidence indicates that FCHO1 overexpression plays a role in lung cancer growth, which highlights the need to identify and develop novel targets to inhibit FCHO1 expression [15,16]. In addition, the involvement of FCHO1 in cell growth suggests that developing therapeutic agents, targeting FCHO1 could be an effective strategy for the treatment of various disease including cancer [14].

siRNAs or peptides capable of inhibiting FCHO1 expression could be used to regulate Akt downstream-signaling pathways by directly inhibiting Akt activity [15,16]. These results may lead to the development of lung cancer therapeutics targeting FCHO1.

MicroRNAs (miRNAs) are another approach to regulate the expression of FCHO1[34]. MiR-99a and miR-5481 directly regulate the PI3K/Akt signaling pathway and inhibit cell proliferation and invasion of lung cancer cells [35-37]. miR-99a or miR-5481-mediated inhibition of FCHO1 may thus suppress the proliferation of lung cancer cells. The inhibition of FCHO1 expression and the ability to modulate the associated Akt and cell cycle signaling pathways could be important strategies leading to novel lung cancer therapeutics (Figure 2). 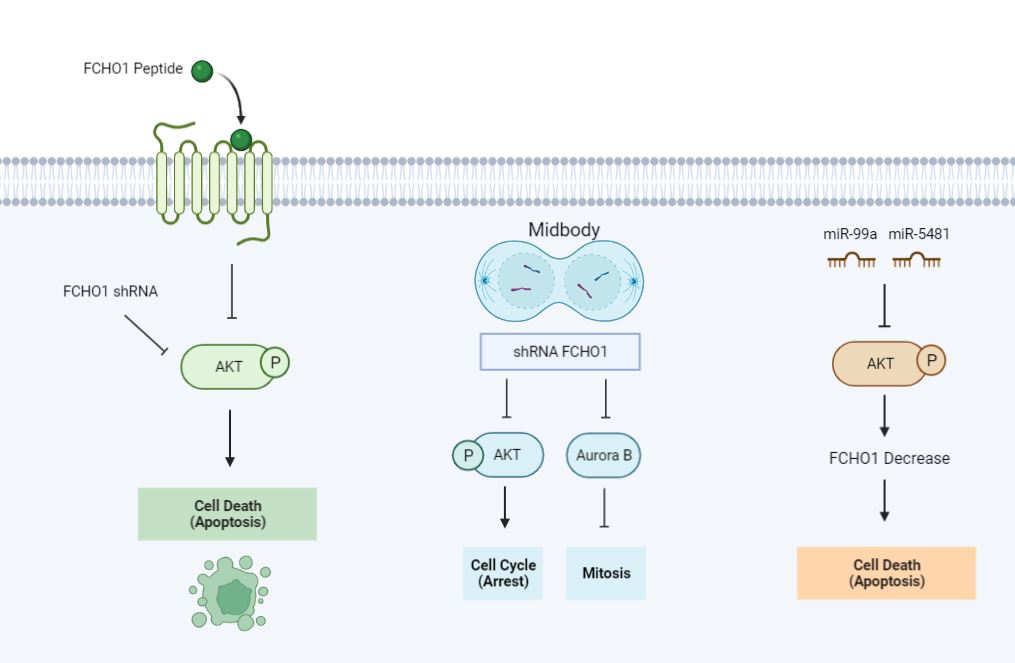 Figure 2: Schematic diagram of the development strategy of FCHO1 as a lung cancer treatment.

We recently showed that FCHO1 is a midbody protein that regulate mitosis [15]. Studies on the mechanism of action of FCHO1 as a mid-body protein involved in lung cancer cell death and progression will also be important for the development of new lung cancer therapeutics.

Competing and Declaration of Interests

All authors have approved the manuscript and agreed with the submission. None of the authors have conflict of interest to declare.

This research was supported by Basic Science Research Program through the National Research Foundation of Korea (NRF) funded by the Ministry of Science, ICT & Future Planning (NRF-2021R1A2C1007373).