Copyright: © 2020 Shrikhande AA. This is an open-access article distributed under the terms of the Creative Commons Attribution License, which permits unrestricted use, distribution, and reproduction in any medium, provided the original author and source are credited.

We published a manuscript entitled “A Novel, Non-opioid Treatment for Chronic Pelvic Pain in Women with Previously Treated Endometriosis Utilizing Pelvic-Floor Musculature Trigger-Point Injections and Peripheral Nerve Hydrodissection”. There is little consensus in the literature on the underlying etiology of endometriosis. There is even less evidence on effective treatment options for endometriosis and its associated chronic pelvic pain. Although there is no cure, traditionally endometriosis symptoms are managed with a combination of hormonal and surgical treatments. This manuscript is a commentary on a unique outpatient neuromusculoskeletal protocol to add to the traditional hormonal and surgical approaches to help improve pain and function in patients with endometriosis. This commentary takes a gastrointestinal and colorectal slant as to how the complex disease process of endometriosis can affect these organ systems and the symptoms that arise when this happens.

Endometriosis is a chronic, hormone-dependent, inflammatory disease, characterized by the presence and growth of endometrial tissue outside the uterine cavity and it is associated with chronic pelvic pain and infertility [1,2]. Worldwide, approximately 176 million women between the ages of 15 and 49 are affected by endometriosis [3]. Endometriosis is a complex disease that induces a chronic inflammatory process and can be challenging to treat [4]. Chronic pelvic pain syndrome (CPPS) is defined as pelvic pain lasting greater than three to six months that is not solely related to menstruation, sexual activity or bowel movements [5]. The symptoms of CPPS include abdominal, lumbosacral, buttock, vulvovaginal, perineal and rectal pain, urinary and bowel symptoms, and pain associated with intercourse. Patients with endometriosis often suffer for many years and see multiple physicians and medical providers before receiving a diagnosis. In patients aged 18- 45, the average delay in diagnosis is 6.7 years [6]. This may be secondary to the fact that endometriosis is a diagnosis of exclusion. The gold standard for the diagnosis of endometriosis has been visual inspection by laparoscopy, preferably with histological confirmation [7]. Because there is lack of a noninvasive test for endometriosis, there is often a significant delay in diagnosis of this disease. One caveat is transvaginal ultrasonography, transrectal ultrasound, and MRI, have the potential to facilitate the diagnosis of certain types of endometriosis, particularly an endometrioma or deep infiltrating endometriosis [8]. No serum marker has been found to diagnose endometriosis with adequate sensitivity and specificity [9]. Compounding the complexity of diagnosis, patients can often have recurrence of the disease even after a surgical excision of endometriosis. The overall recurrence rates range between 6% to 67% [4].

Currently there is no definitive cure for endometriosis however, therapy has three main objectives: (1) to reduce pain; (2) to increase the possibility of pregnancy; (3) to delay recurrence for as long as possible. [10]. The disease treatment options can be divided into surgical and hormonal, and most often they are combined. This is known as a medico-surgical approach [11]. Almost all the available hormonal treatment options suppress ovarian function and are not curative [12]. On example of a hormonal treatment option is Elagolix (Orilissa). Elagolix is an oral, nonpeptide, gonadotropin-releasing hormone (GnRH) antagonist used to treat moderate to severe pain related to endometriosis. Inhibition of GnRH leads to estrogen suppression and subsequent dose-dependent inhibition of endometriotic proliferation [13]. Surgical resection can be accomplished through therapeutic laparoscopic techniques using scissors, electrosurgical instruments, lasers, suture, and staplers [14]. One study showed that laparoscopic excision of endometriosis was more effective than placebo at decreasing pain and improving quality of life for endometriosis patients of all stages [15]. We propose a non-operative neuromusculoskeletal approach in addition to the hormonal and surgical combination, to help reduce pelvic pain symptoms associated with endometriosis.

In 2019, we published a retrospective chart review on treating women with Chronic Pelvic Pain Syndrome (CPPS) and a pathological diagnosis of Endometriosis. The objective of this study was to assess treating the pain associated with endometriosis with a series of pelvic floor musculature trigger point injections and peripheral nerve hydrodissection with a goal of decreasing pain and improving function. In this paper sixteen female patients with biopsy-confirmed endometriosis underwent a series of external ultrasound guided trigger point injections to the iliococcygeus, pubococcygeus and puborectalis in combination with peripheral nerve hydrodissection along both the pudendal nerve at Alcocks canal and the posterior femoral nerve at the Obturator canal (Figure 1). These treatments were once weekly for six weeks. Pelvic pain intensity as measured pretreatment and post treatment by the 0 to 10 Visual Analogue Scale (VAS) and the Functional Pelvic Pain Scale (FPPS). The FPPS rates pelvic function in eight categories: bladder, bowel, intercourse, walking, sleeping, working, running, and lifting. The patient rates each category from 0 to 4, with 0 being normal function and 4 being severe debilitation. Thus, each patient can be given a total score from 0 to 32. The mean VAS score decreased from 6.0 (SD 2.7) to 2.9 (SD 2.6) post treatment. The mean total FPPS score decreased from 14.4 (SD 5.2) to 9.1 (SD 5.8) post treatment. The analysis suggested that the treatment was effective at relieving pain and improving overall pelvic function related to endometriosis [16]. 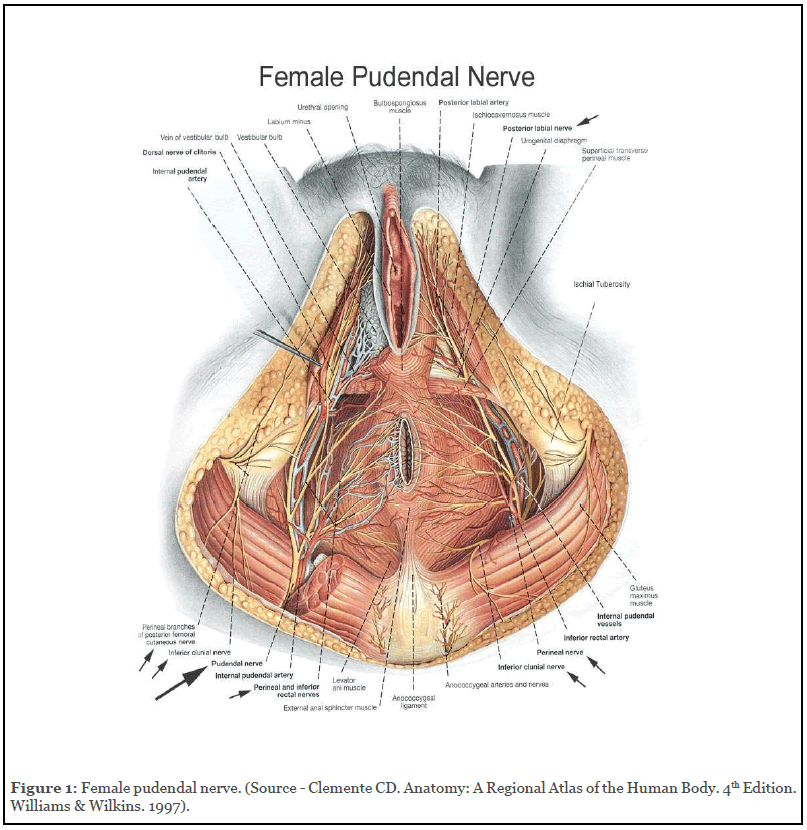 Cross-sensitization in the pelvis can contribute to endometriosis upregulating surrounding pelvic structures such as the bowel, pelvic floor musculature and nerves [22]. Cross sensitization in the pelvis refers to the transmission of noxious stimuli from a diseased pelvic organ to a normal adjacent structure. This occurs through shared neural pathways at prespinal, spinal and supraspinal levels. The result is functional changes of sensitization of the adjacent normal structure with increased membrane excitability, increased synaptic recruitment and a decreased threshold for peripheral nociceptors to fire [22]. Upregulation of the bowel by adjacent endometriosis plaques may contribute to the abnormal pain perception or visceral hypersensitivity (VH) considered to be an important mechanism underlying symptoms of irritable bowel syndrome [23,24]. Crosssensitization of pelvic floor muscles will contribute to the chronic guarding state and a nonrelaxing pelvic floor. With ultimate, constipation, straining on the toilet, and a sensation of incomplete evacuation. Cross-sensitization of the pudendal nerve will contribute to pudendal neuralgia symptoms of anorectal pain, pain with bowel movement and bowel frequency.

Our protocol aims to concomitantly reverse the pelvic floor myofascial pain and dysfunction, peripheral sensitization and central sensitization that exists in endometriosis patients. The approach is threefold. First, we aim to reduce spontaneous ectopic activity of peripheral nociceptors in the pudendal and posterior femoral cutaneous nerves with repetitive exposure to lidocaine 1% [33]. With this process, we are resetting and desensitizing the Nav1.7 channels involved in the aberrant firing of peripheral nociceptors [34]. Second, we aim to increase blood flow to the peripheral nerves by releasing connective tissue and fascial restrictions with hydro-dissection [35]. Neurogenic inflammation is treated both with reversing the neural ischemia and using the medication dexamethasone one time on each side [28]. Third, we aim to reset short, spastic and weak muscle spindles with trigger point injections to each muscle in the levator ani sling [36,37].

Much of the benefit of the injection protocol is mechanical in nature. However, the repetitive exposure to the anesthetic Lidocaine 1% is also crucial to reset hyperactive peripheral nociceptors and decrease the mast cell release of histamine [40]. We have realized that using dexamethasone one time on each side is sufficient to treat the neurogenic inflammation. Therefore, we have transitioned to using normal saline with lidocaine instead of using the homeopathic medication traumeel [16] with lidocaine for the subsequent treatments.

Endometriosis patients are often underdiagnosed, undertreated and suffer for many years before receiving a diagnosis. Ultimately, the chronicity of symptoms is the most challenging aspect of treatment as the longer the pain and functional impairments are present the more challenging it is to reverse due to changes in mRNA and recruitment of silent nociceptors. Imprinting in the mRNA in the dorsal horn of the spinal cord is noted particularly for the pain pathway neuropeptides dynorphin, enkephalin and substance P [42]. With chronic pain and inflammation there is upregulation of silent nociceptors. One study found that silent nociceptors account for 50% of all nociceptors in visceral organs and deep somatic tissues and are sensitized by the inflammatory mediator NGF seen in endometriosis peritoneal fluid [27]. This suggests that the upregulation of silent nociceptors significantly contributes to inflammation-induced mechanical hyperalgesia and can be challenging to reverse [43]. Therefore, raising awareness about endometriosis and initiating treatment for prevalent underlying musculoskeletal disorders [44] and sensitization [45] seen in endometriosis may assist in decreasing the amount of time patients are suffering. In order to prevent the neuroplastic changes in the nervous system described above, we suggest initiating our protocol if six weeks of pelvic floor physical therapy alone does not resolve symptoms as our protocol has been shown to be extremely safe in that we use a 27G needle, no anesthesia is required, patients go straight to work and it speeds up the healing process in that it can help decrease pain and improve function.

We have retrospectively analyzed a larger cohort of seventy female patients with CPPS and Endometriosis using VAS and FPPS (Functional Pelvic Pain Scale) for outcome measurement and the results continue to be shown. Demonstrating that treatment with external ultrasound guided trigger point injections to the levator ani sling with peripheral nerve hydrodissection continues to decrease pain and improve function for these patients on a larger scale.

In treating endometriosis patients, we believe it is important to look at the integration of the organ systems, with the peripheral and central nervous system, muscles, and fascia. As there is no “silver bullet” or known cure for endometriosis, a multimodal, interdisciplinary medicosurgical approach to a complex multi-faceted disease process may help endometriosis patients not only decrease pain but also improve function.

Patient’s endometriosis symptoms can be explained and treated with safe, effective, non-opioid therapies. We encourage gastrointestinal physicians who see women with persistent gastrointestinal symptoms despite a negative work up and appropriate medical treatment to consider endometriosis in their differential. We propose a functional, restorative approach to ameliorate the pelvic pain symptoms associated with endometriosis. Targeting peripheral mechanisms in endometriosis-associated inflammatory pain may lead to improved treatment.

Continued research in this area is required, to help improve the quality of life for these patients. Conceptually, understanding the importance of resetting the peripheral and central nervous system and treating persisting pelvic floor muscle dysfunction that co-exists in endometriosis patients can help improve their pain and function.

There are no conflicts of interest to report.

There is no funding to report for this study.