Role of Perforin-2 in Regulating Type I Interferon Signaling

Copyright: © 2021 Plano G, et al. This is an open-access article distributed under the terms of the Creative Commons Attribution License, which permits unrestricted use, distribution, and reproduction in any medium, provided the original author and source are credited.

Sepsis is a systemic inflammatory response caused by a harmful host immune reaction that is activated in response to microbial infections. Infection-induced type I interferons (IFNs) play critical roles during septic shock. Type I IFNs initiate their biological effects by binding to their transmembrane interferon receptors and initiating the phosphorylation and activation of tyrosine kinases TYK2 and JAK1, which promote phosphorylation and activation of STAT molecules. Type I IFN-induced activation of JAK/STAT pathways is a complex process and not well understood. Improper regulation of type I IFN responses can lead to the development of infectious and inflammation-related diseases, including septic shock, autoimmune diseases, and inflammatory syndromes. This review is mainly focused on the possible mechanistic roles of the transmembrane Perforin-2 molecule in the regulation of type I IFNinduced signaling.

Type I interferons (IFNs) produced in response to infections with either bacterial, viral or fungal pathogens are critical to induce antimicrobial defenses in infected and adjacent cells to reduce the spread of microbes, initiate communication between innate and adaptive immunity, and to promote the survival of the host [1]. Improper induction or regulation of type I IFN signaling can lead to chronic infection-induced inflammation-related diseases, including septic shock, autoimmune diseases, and inflammatory syndromes [2].

Type I IFNs consist of a group of structurally similar cytokines including IFN-α (which can be further subdivided into 13 different subtypes), IFN-β, IFN-δ, IFN-ε, IFN-κ, IFN-τ, and IFN-ω1–3. These IFNs can act in an autocrine, paracrine, or systemic fashion. Studies have shown that all type I IFNs exclusively bind to and signal through ubiquitously expressed heterodimeric transmembrane (TM) receptors composed of two subunits—IFNAR1 and IFNAR2 [3], which are constitutively associated with tyrosine kinases TYK2 and JAK1/STAT2 (signal transducer and activator of transcription 2), respectively, under normal physiological conditions [4,5]. Upon binding of type I IFNs to IFNAR1 and IFNAR2, the proximal receptor complex is assembled and the tyrosine kinases TYK2 and JAK1 are activated by reciprocal transphosphorylation. Although activated TYK2 and JAK1 phosphorylate and activate STAT2, which is a critical early step for STAT1 activation by type I IFN in canonical signaling [6], the mechanism of STAT2-dependent STAT1 activation after stimulation of type I IFN is poorly understood. Activated STAT1 and STAT2 monomers dimerize and interact with IRF9 (IFN-regulatory factor 9) in the cytoplasm, which is known as the ISGF3 (IFN-stimulated gene (ISG) factor 3) complex [1,7]. This ISGF3 complex translocates to the nucleus, binds IFN-stimulated response elements (ISREs) in DNA, and initiates the activation of several hundred interferon stimulated genes (ISGs) [8,9]. Type I IFN– activated STAT1 can also form a homodimer known as IFNγ-Activated Factor (GAF), which migrates into the nucleus, and binds to IFNγ-Activated Sequences (GAS), to induce proinflammatory genes [10,11]. Type I IFN activated STAT1 and STAT2 also form other heterodimers, including STAT1-STAT3, STAT1-STAT4, STAT1-STAT5, and STAT2-STAT3 in specific cell types such as endothelial cells or cells of lymphoid origin [3,12-14].

Perforin-2, also known as macrophage-expressed gene 1 (MPEG1), is a major anti-bacterial effector protein of the innate immune system in both phagocytic and tissue forming cells [31-33]. The expression of Perforin-2 is not limited to macrophages but is found in many other cell types, including murine embryonic fibroblasts (MEFs) and epithelial cells [34]. It is a ~72-kDa protein localized in select intracellular membranes and at the cell surface [34,35]. Perforin-2 forms pores in grampositive, gram-negative, and acid-fast bacteria and limits the proliferation and spread of these bacteria [36,37]. Perforin-2 is highly conserved throughout evolution from sea sponges to humans [31]. Some studies have also suggested that Perforin-2 may have an anti-microbial role in invertebrates, including clams, mussels, and snails [35]. Evolutionary studies of Perforin-2 have demonstrated that it is one of the oldest eukaryotic MACPF members, present in early metazoan phyla, including Porifera (sponges) [31]. Perforin-2 contains an N-terminal Membrane Attack Complex/Perforin (MACPF) domain, a Perforin-2 (P2) domain, a single transmembrane domain (TM), and a C-terminal cytoplasmic tail (CT) containing a FERMBinding motif [31,34]. There is also a shorter, alternatively spliced Perforin-2 form that lacks the TM and CT domains, but its function is not well understood [38].

Regulation of IFNAR1 and IFNAR1 activation by Perforin-2

Perforin-2 has recently been shown to play additional roles in innate immunity to bacterial infections [34]. The stimulation of Toll-like receptor-4 (TLR-4) by the central outer membrane molecule of gram-negative bacteria, lipopolysaccharide (LPS), initiates the production of type I interferons through the TRIF adaptor molecule [39,40]. LPS-induced type I interferons play critical roles in LPS-induced toxic shock [41]. Perforin-2 knockout mice challenged with a high dose of LPS were resistant to LPS-induced septic shock [34]. This phenomenon was similar to mice deficient in IFNAR1 or TYK-2, which are critical effectors of type I IFN signaling [42-44]. Perforin-2 knockout macrophages also demonstrated decreased production of IP-10 (CXCL10) after LPS challenge [34]. IP-10 is induced by type I IFN in a STAT1-dependent manner and plays a critical role in LPS-induced sepsis [45-47]. Perforin-2 is also vital for type I-IFN–mediated inhibition of viral replication [34]. These findings prompted the authors to investigate whether Perforin-2 plays a role in type I IFN signaling. Interestingly, the authors found that Perforin-2 was expressed on the cell surface as an integral component of type I IFN signaling. Both IFNAR1 and IFNAR2 are expressed on the cell surface in an isolated form in resting cells [5,48]. IFNAR1 and IFNAR2 rapidly dimerize upon stimulation with type I IFN to activate downstream signaling events; however, the mechanism that brings these receptors together after type I IFN stimulation is poorly understood. Intriguingly, the N-linked glycosylated extracellular MACPF domain of Perforin-2 is constitutively associated with IFNAR1, known as ligand-independent complex I, in resting cells (Figure 1). Similarly, the N-linked glycosylated extracellular P2 domain of Perforin-2 is constitutively associated with IFNAR2, known as ligand-independent complex II, in resting cells (Figure 1). In resting cells, Perforin-2 may be keeping IFNAR1 and IFNAR2 in the correct conformation, which is crucial to forming an active ligand dependent complex III essential for downstream signaling [34]. Loss of N-linked glycosylation in either the MACPF or P2 domains of Perforin-2 resulted in loss of complex I and II, respectively, as well as active complex III after stimulation with type I IFN and downstream signaling (Figure 1) [34]. Although the extracellular MACPF and P2 domains of Perforin-2 are constitutively associated with IFNAR1 and IFNAR2, the extracellular domain/motif of IFNAR1 and IFNAR2 that interact with MACPF and P2 domains are not known [34]. 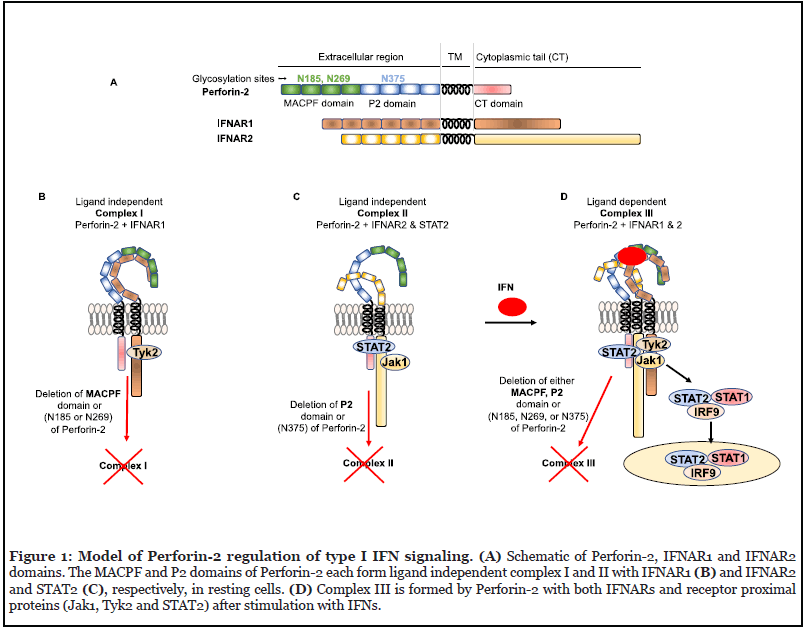 Regulation of TYK2 and JAK1 phosphorylation and activation by Perforin-2

The multidomain non-receptor tyrosine kinases TYK2 and JAK1 belong to the JAK family in mammals [49]. Many cytokines and growth factor receptors regulate the activity of intracellular JAKs and vice versa in the immune system to limit harmful stimuli, microbial infections, and inflammatory diseases. Deletion or loss of TYK2 or JAK1 leads to severely compromised immune function [50,51]. JAK1 and TYK2 constitutively and non-covalently associate with their cognate signaling receptors in resting cells [52]. JAK1 and TYK2 share conserved N-terminal FERM and SH2 domains, followed by a pseudokinase and a kinase domain. FERM and SH2 domains are essential for association with the cytoplasmic domain of cytokine receptors [53]. The kinase domain is critical for activating downstream signaling, while the pseudokinase domain suppresses the kinase activity of JAK1 and TYK2 [54-57]. Upon stimulation with type I IFN, the heterodimeric receptor complex, IFNAR1 and IFNAR2, is formed and phosphorylated, activating JAK1 and TYK2 phosphorylation required for downstream signaling [3].

Regulation of STAT1 and STAT2 phosphorylation and activation by perforin-2

Activation of the STAT family of transcription factors in response to stimulation with type I IFN is critical for the induction of specific genes involved in antiviral, antitumor, and anti-proliferative activities [58]. Dysregulation of STAT activation after stimulation with type I IFN could lead to autoimmune disorders such as Sjögren syndrome, systemic lupus erythematosus, rheumatoid arthritis, and systemic sclerosis [58,59]. There are seven STAT family members (STAT1, STAT2, STAT3, STAT4, STAT5a, STAT5b and STAT6) that bind to GAS elements [60]. In contrast, the trimeric (ISGF3) complex containing STAT1, STAT2 and IRF9 binds to ISREs [61]. All members of the STAT family are composed of seven domains (N-terminal, coiled-coil, DNA binding, linker, SH2, transactivation, and C-terminal) [9,62]. Most of the STAT proteins interact with the cytoplasmic tail of receptors [63-65]. The tyrosine phosphorylation and activation of STAT1 and STAT2 are induced after stimulation with type I IFN; however, STAT1 and STAT2 phosphorylation and activation after stimulation with type I IFN are severely inhibited in Perforin-2-deficient cells [34]. Studies have shown that STAT2 is constitutively associated with the cytoplasmic tail of IFNAR2 [4]. Surprisingly, the CT domain of Perforin-2 is critical for STAT2’s constitutive interaction with the cytoplasmic tail of IFNAR2 [34]. However, the CT domain of Perforin-2 alone does not facilitate the recruitment of STAT2 to IFNAR2 in the absence of the P2 domaindirected association of Perforin-2 with IFNAR2 [34].

Regulation of non-canonical type I IFN signaling by Perforin-2

The canonical type I IFN-induced ISGF33 complex is controlled by activated STAT3 [66]. Activated STAT3 forms a complex with STAT1 (STAT1:STAT3), but not STAT2 or IRF9, and destabilizes the ISGF3 complex [67,68]. However, whether Perforin-2 is required for the activation of STAT3 is not known. Studies have shown that STAT4 is constitutively associated with IFNAR2 and is activated by type I IFN [69]. Similarly, STAT5 constitutively interacts with TYK-2 and IFNAR1 [17]; however; it is not known whether the CT domain of Perforin-2 also regulates the interaction between STAT4 and IFNAR2 or STAT5, TYK-2 and IFNAR1, respectively. TYK2-mediated STAT5 phosphorylation creates a docking site for CrkL upon stimulation with type I IFN [70]. Once associated, the STAT5:CrkL complex translocates into the nucleolus and binds to GAS elements to induce growth-inhibitory genes [15,17,71]. Similarly, activation of STAT6 after type I IFN stimulation allows STAT6 to form a complex with STAT2, which induces anti-proliferative genes [72,73]. However, it is unknown if Perforin-2 is involved in the activation of STAT5 and STAT6. The activation of PI3K and MAPK after type I IFN stimulation is significantly delayed in Perforin-2 deficient cells [34]; however; it is not clear whether Perforin-2 is directly regulating the activation of PI3K subunits, p85 or p110, or PI3K activation of IRS1 or IRS2.

Based on recent findings, it is clear that Perforin-2 is playing an important role in regulating the type I IFN response and protecting the host from viral infection, but a number of issues remain to be addressed. Although a low level of Perforin-2 expression is sufficient for the activation of type I IFN signaling, what is the role of constitutively high expression of Perforin-2 in immune cells such as macrophages and neutrophils in the context of type I IFN signaling? In addition, due to the constitutive association of Perforin-2 with IFNAR1 and IFNAR2, it will be important to develop highly selective inhibitors targeting the Perforin-2-IFNAR1 and Perforin-2-IFNAR2 complexes in order to elucidate the roles of these complexes in tissue homeostasis.