Copyright: © 2020 Qin J, et al. This is an open-access article distributed under the terms of the Creative Commons Attribution License, which permits unrestricted use, distribution, and reproduction in any medium, provided the original author and source are credited.

Epithelial-mesenchymal transition (EMT), a lineage transition from epithelium to mesenchyme, is induced by a convergence of signaling pathways and often driven by TGFß/SMAD signaling. Except for its critical roles on cell shape and motility during cancer invasion and metastasis, TGFß/SMAD activation-induced EMT has also been reported to be involved in cancer stem cell (CSC) generation. We studied the role of PRMT1 in TGFß/SMAD signaling and found that PRMT1-catalyzed arginine methylation of SMAD7 is required for TGFß/SMAD signaling, and thus critical for TGFß-induced EMT and maintenance of epithelial stemness. Together with the emerging associations between SMAD7, EMT and the sustenance of CSC, PRMT1-catalyzed SMAD7 arginine methylation is not only required for TGFß/SMAD signaling, more importantly, it also bridges EMT and stemness. Here, we offer perspectives on PRMT1 and SMAD7 methylation as potential therapeutic targets for tumor dissemination and relapse.

Epithelial-mesenchymal transition (EMT) is a process that cells transition from epithelial to mesenchymal status, which allow the cells to progressively adopt the elongated appearance, migratory behavior, and invasive capacity. Cells acquire plasticity during EMT, which is crucial for embryonic development, wound healing in the skin, organ fibrosis, and cancer metastasis [1]. EMT is orchestrated by a set of core EMT-inducing transcriptions factors (EMTTFs), including the zinc-finger E-box-binding homeobox factors ZEB1 and ZEB2, SNAIL (also known as SNAI1), SLUG (also known as SNAI2) and the basic helix-loophelix factors TWIST1 and TWIST2 [2]. EMT can be induced by pleiotropic signaling factors through inducing the expression of the EMT-TFs. Among all the EMT activators, the transforming growth factor-β (TGFβ) plays a central role in inducing EMT during almost all the above mentioned physiological and pathological processes [3].

In the canonical TGFβ/Smad signaling pathway, once TGFβ interacts with the TGFβ receptor hetero-tetrameric complex, the type I TGFβ receptors (TbRIs) will be phosphorylated in the cytoplasmic domain and activated by type II TGFβ receptors (TbRIIs). The phosphorylated TbRIs thus interact with and phosphorylate receptorregulated Smads (R-Smads), which then form heteromeric complexes with the common Smad4 (co-Smad) and translocate into the nucleus where they regulate the expression of TGFβ/Smad target genes [4,5]. Among the TGFβ target genes, SMAD7 encodes the inhibitory Smad (I-Smad), Smad7, which establishes a negative feedback loop to inhibit TGFβ signaling. Multiple strategies are employed by I-Smad to repress TGFβ/SMAD signaling, including interference with activation of R-Smad by competitive binding to type I receptors [6,7], facilitating TbRI ubiquitylation and degradation through recruiting of E3 ubiquitin ligases [8] and reversing the activation of TbRI by recruiting phosphatase [9].

We reported a new PTM of SMAD7, methylation by protein arginine methyltransferase 1 (PRMT1) at arginine (R) 57 and 67 [5]. PRMT1 is the major arginine methyltransferase in the PRMT family, which is responsible for 75% of all arginine methylation in mammalian cells [14]. We found that TGFβ-induced PRMT1-catalyzed arginine methylation of SMAD7 decreased its binding efficiency to TbRI and promoted its dissociation from the activated TbRI. In accordance with the previously mentioned repressing function of I-SMAD, our findings suggested that SMAD7 methylation has the capacity to enhance TbRI availability for R-SMAD phosphorylation and activation [15]. Accordingly, through methylating SMAD7, PRMT1 promoted TGFβ/SMAD signaling activation and subsequent transcription activation of EMT transcription factors. In addition, the methylation of SMAD7 dramatically extended its half-life from half an hour to 4 hours, indicating PRMT1-mediated methylation decreased stability and increased degradation of SMAD7. When PRMT1 expression was suppressed, SMAD7 methylation was suppressed, TGFβ/SMAD signaling was impaired and its target genes could not be induced. These observations indicated that PRMT1 is required for TGFβ/ SMAD signaling [5] (Figure 2). 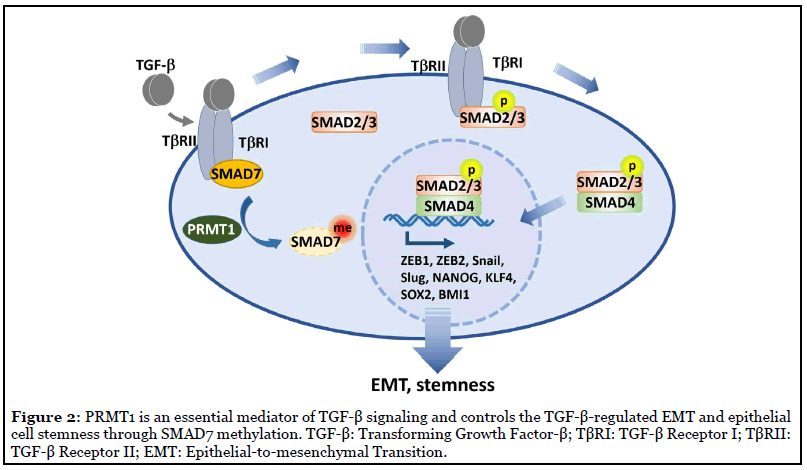 Consequential to the modulation of TGFβ/SMAD signaling, PRMT1 is critical for TGFβ-induced expression of core EMT-TF, including ZEB1 and ZEB2, Snail and Slug [5]. The roles of EMT on cell motility and cell shape have been extensively studied, especially in cancer metastasis and invasion. More recently, the relationship and underlying mechanism between EMT and cancer stem cells (CSCs) are emerging. The CSC has been defined as a population of cells with stem cell-like properties that has the ability to initiate tumor growth and give rise to a tumor mass [16]. It has been reported that EMT, or a partial EMT, promote the acquisition of stem-like properties in many types of cancers, including breast, lung, pancreatic and colon carcinomas [3]. EMT-TF ZEB1 was first found to be required for stemness in pancreatic cancer by repressing expression of stemness-inhibiting miRNAs [17]. In mammary gland, together with ZEB1, EMT-TFs Slug and Snail have been shown to promote the stemness of mammary epithelial cells and mammary tumor initiating cells [18-21].

As a pluripotent cytokine, TGFβ is involved in cancer stem cells generation and thus tumor initiation in breast cancer and skin squamous cell carcinomas [18,19,22]. We observed that PRMT1-mediated SMAD7 methylation promoted EMT-TF expression, and was needed in stem cell generation induced by TGFβ. The suppression of PRMT1 significantly repressed the rise of CD44highCD24low cell population, the signature for epithelial stem cells, in human mammary epithelial cells [5]. The expression of the protein markers of mammary epithelial stem cells were examined, including CD44, KLF4, BMI1, POU5F1, and NANOG. The result showed that PRMT1 silencing dramatically inhibited the induction of the expression of those stemness genes and mammosphere formation by TGFβ [5]. Our results demonstrated that SMAD7 methylation by PRMT1 enabled TGFβ/SMAD signaling, and thus promote EMT-TF expression, EMT progression, and cancer stem-cell formation. These observations also provide additional evidence bridging EMT and stemness.

As a key intrinsic negative regulator of TGFβ/ SMAD signaling pathway, reduction of SMAD7 expression leads to enhancement in TGFβ-induced EMT and tumor metastasis. The reduction of SMAD7 expression has been correlated with shorter recurrence-free survival and poor overall survival in hepatocellular carcinoma (HCC), breast cancer, melanoma, glioblastoma, and renal cancer [23-28]. However, there are also studies that reported the opposite observations whereby increased expression of SMAD7 indicated poor prognosis in cancer types, such as melanoma and acute myeloid leukemia (AML) [29,30]. In colorectal cancer (CRC), SMAD7 was observed to play a dual role that it could be associated with either poor prognosis or better outcome [31]. The association between SMAD7 expression and cancer prognosis may ascribe to TGFβ’s bidirectional regulation on cancer [32].

Despite the debated role of SMAD7 in cancer prognosis, it is noteworthy that the role of SMAD7 in the maintenance of CSCs stemness is emerging. It has been reported that suppressing SMAD7 expression enhances CSCs stemness in HCC, breast cancer, nasopharyngeal carcinoma (NPC), and glioma [33-36]. More importantly, SMAD7 ubiquitination, one of the best known PTMs of SMAD7, was found to promote CSCs stemness through promoting its degradation [34,36]. We demonstrated that PRMT1- catalyzed methylation decreased SMAD7 stability and regulated epithelial stemness. Taken together, these findings indicate a role of SMAD7 in maintaining CSCs stemness.

In multiple cancer types, PRMT1 has been found to be aberrantly expressed, such as in breast, prostate, colon cancer, and leukemia [37]. It has documented its roles in DNA repair, telomere maintenance, apoptosis and oxidative stress response in cancer formation [38-41]. PRMT1 expression is mostly reported to be increased and associated with poor prognosis [42-46]. In accordance with our observations, PRMT1 is promotive for EMT during tumor progression in many cancer types [47-50]. Recently, we found that by interfering with p53 stability, PRMT1 is also involved in heart development through regulating epicardial differentiation and EMT, further attesting critical roles of PRMT1 in EMT and stemness [51]. EMT has the potential to promote CSC stemness, which is crucial for tumorigenesis, therapy resistance and thus tumor relapse post-treatment [52]. We have demonstrated that PRMT1 induced SMAD7 methylation is required for TGFβ/SMAD signaling and TGFβ induced EMT, which offer a perspective on the roles of PRMT1 and the corresponding SMAD7 methylation in CSCs-related tumorigenesis, therapy resistance and thus tumor relapse post-treatment. Based on our observations, PRMT1 and SMAD7 methylation are potential therapeutic targets for tumor dissemination and relapse.