Copyright: © 2022 Vaineau C, et al. This is an open-access article distributed under the terms of the Creative Commons Attribution License, which permits unrestricted use, distribution, and reproduction in any medium, provided the original author and source are credited.

Endometriosis is a chronic disease affecting approximately 10% of women in their reproductive years, often leading to pelvic pain and infertility. It is characterized by endometrial-like tissue, which grows outside the uterus [1]. A thorough medical history and gynecological examination including transvaginal ultrasound, are the primary diagnostic tools [2], although due to their low sensitivity, visualization during laparoscopy remains the gold standard. However, given its invasiveness, it is no longer recommended as a primary diagnostic procedure and according to previous guidelines hormonal therapy can be started empirically to treat endometriosis-associated pain [3]. Hormonal therapy in turn is not tolerated or inefficient in about a third of the patients [4,5]. Hence, endometriosis treatment may be delayed for up to ten years [6].

In the search for a more effective and less invasive diagnostic tool, many biomarkers have been proposed, but none is sufficiently effective to be adopted into clinical practice [7]. Some biomarkers have also been implicated in pathogenesis and represent potential therapeutic targets, as they are elevated in the peritoneal cavity in patients with endometriosis [8,9].

Leptin, a 16-kilodalton (kDa) protein, is an adipokine mainly produced in adipocytes and involved in the lipid metabolism, regulating hunger and food intake [10]. There is also increasing evidence that leptin is linked to immune function and plays a role in autoimmune disorders [11]. Furthermore, leptin may play a role in fertility. Higher serum leptin levels have been found in women with unexplained fertility [12]. Moreover, the leptin receptors have been shown to be expressed in endometrial cells and leptin is assumed to be produced by human ovarian follicles and stimulates Gonadotrophinreleasing hormone (GnRH)-secretion in the hypothalamus [ 13,14].

Given the need to improve diagnostic options for women with endometriosis, we aimed to use a cohort of sufficient size and power to assess the difference in PF leptin concentrations between women with and without endometriosis and determine its potential as a diagnostic biomarker or therapeutic target for endometriosis.

The study followed the “Strengthening the reporting of observational studies in epidemiology” guidelines [20]. This is a retrospective analysis of prospectively collected data. All women of reproductive age undergoing laparoscopic intervention for endometriosis or other benign gynecological conditions in the Department of Obstetrics and Gynecology, University of Bern (Switzerland) between 2007 and 2018 were recruited for the study. Written informed consent, detailed information on hormonal treatment usage, cycle phase and demographic biomarkers were obtained from all participants prior to surgery. The relevant Ethical committee (Project-ID 2020-00937) approved the project. Exclusion criteria were patients suffering from other inflammatory diseases, pregnancy, malignancy and surgery performed in an emergency situation. Surgery took place after at least 8 hours (h) of fasting. The peritoneal fluid (PF), that was present in the abdominal cavity at the beginning of the operation (between 0.5-40 ml), was aspirated from the pouch of Douglas at the beginning of the laparoscopy before performing any surgical procedure. For the laparoscopy, Karl Storz instruments and devices were used (distributed by Anklin AG, 4153 Reinach, Switzerland). Intraoperative findings and revised American Fertility Society (rASRM) stage of endometriosis were assessed and documented. Menstrual cycle was determined by selfreported cycle day, or serum progesterone measurement in nanomols per liter (nmol/L). If the surgery took place between the 10th and 19th cycle day or if the date of the last menstruation was not available, the menstrual cycle phase was determined according to the progesterone concentration in PF (cut-off 25 nmol/L)). Patients taking hormonal treatments were considered amenorrheic. In patients with no hormonal therapy, the cycle phase was marked as unknown if the cycle day was between the 10th and 19th cycle day without available progesterone concentration or if the cycle day and progesterone concentration in PF were not available or provided conflicting results. The cycle phase was also marked as unknown if the history of hormonal treatment was unknown.

Peritoneal fluid samples were clarified by centrifugation (10 minutes (min) at 1800 times gravity) and stored undiluted at −70°C prior to assay. Hemolyzed PF or samples with insufficient PF volume were excluded. The total protein content in PF was determined using a micro-bicinchoninic assay (Quanti-Pro® BCA, Sigma-Aldrich, St. Louis, 140 Missouri, United States of America) to ascertain absence of dilution with abdominal flushing medium under the procedure. Samples with a protein concentration below 10 ng/ml were excluded. Peritoneal fluid leptin concentrations were measured by ELISA as previously described [17], using a Duoset® microplate sandwich protocol (DY398; R&D Systems, Abingdon, England). The diluent (Cat. No. DY995) was obtained from the same provider, the standard range was from 2000 to 31.25 pg/ml in serial 1:2 steps as recommended, and the sample dilution was 1:50. All incubations were run at a constant temperature of 25°C, in DY995 and for the duration of the recommended in the protocol.

Raw data were imported in IBM SPSS (Statistical Package for the Social Sciences) statistics for Windows (Version 25.0. IBM Corp: Armonk, New York, United States of America) for statistical analysis. Mean values and standard deviations (SD) were calculated for continuous variables and percentages for qualitative variables. Body mass index (BMI) and age between patients with and without endometriosis were compared by t test while the influence of cycle phase was assessed via a χ2 test. Data normality was tested using the Kolmogorov– Smirnov test. Due to a deviation from a normal distribution (p=0.000), we performed a logarithmic transformation log(10) to obtain log transformed leptin levels corresponding to a normal distribution (Figures 1 and 2). 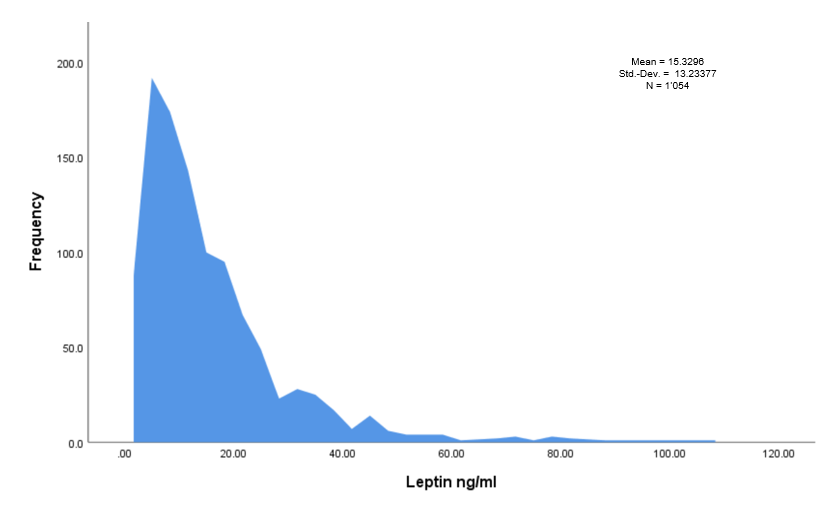 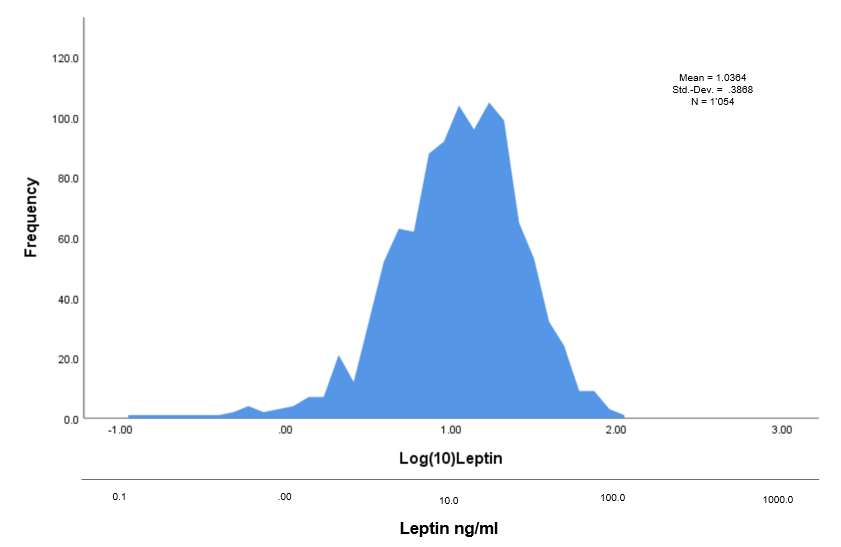 Linear regression analysis was used to study the relationship between leptin concentrations and BMI in all patients as well as in patients based on endometriosis status. Differences between regression lines were analyzed using ANOVA. Differences in logarithmic leptin concentrations between patients with and without endometriosis (fixed factor, two levels: yes, no) and between menstrual cycle phases (fixed factor, four levels: proliferative, secretory, unknown, hormonal treatment) were tested using analysis of covariance (ANCOVA; general linear model, full factorial). The potential confounders age and Body Mass Index were included as covariates in the ANCOVA model to reduce sources of bias. The obligatory assumptions as a prerequisite for carrying out this analysis (Levene’s test for homogeneity of variance, homogeneity of regression, normality check, and independence) were checked and met. 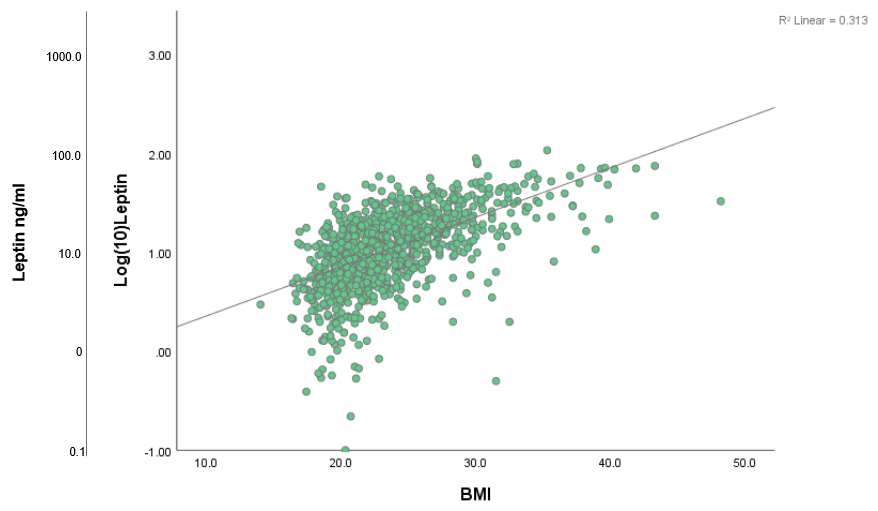 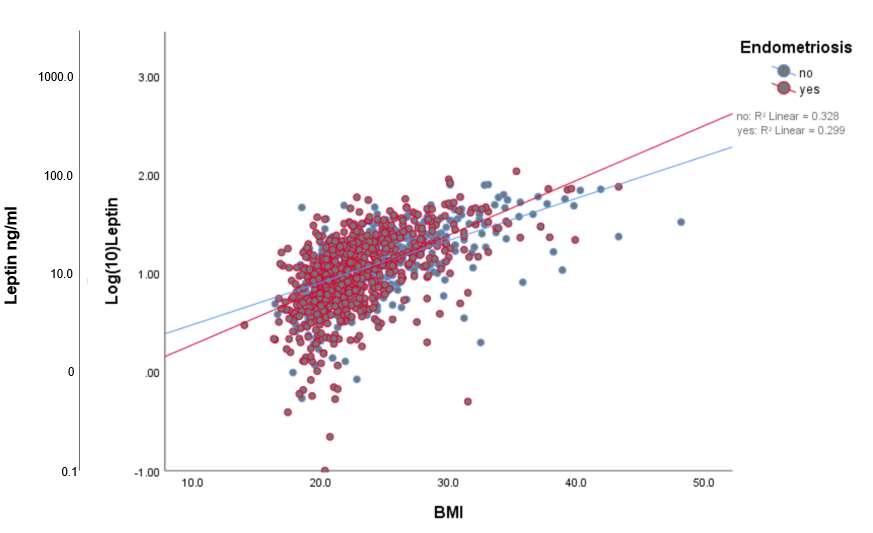 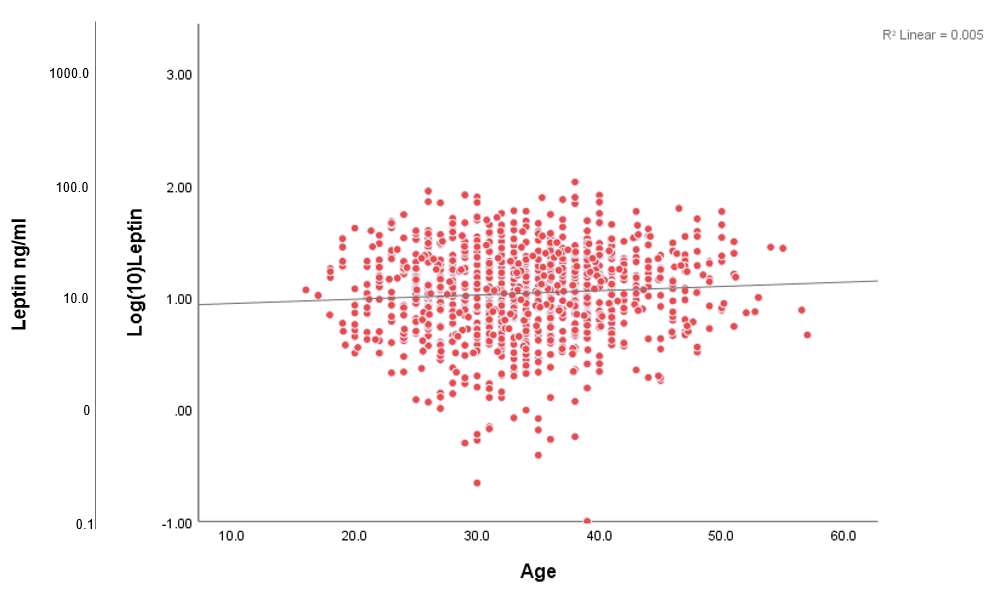 Five studies have shown lower or similar PF leptin levels in endometriosis, which is in line with our findings. Interestingly, three of these studies included a relatively high number of patients (56, 72 and 98 patients) compared to other studies evaluating PF leptin in endometriosis [17-19,24-26].

Elevated serum leptin concentrations have been reported in obese patients [11,27] and a correlation of BMI and leptin concentration has also been shown in follicular fluid [28]. In line with these findings, our study reports a strong influence of the patient’s BMI on the variance of PF leptin levels. Moreover, endometriosis has been associated with a lower average BMI than women without endometriosis [29,30], which was confirmed in our cohort (Table 1). Therefore, we included BMI as a covariate in the ANCOVA analysis. Although most studies included in the above-mentioned meta-analyses have taken the patients’ BMI into account, BMI was not included as a covariate. Instead, patient groups were either matched according to BMI or a leptin-BMI ratio was applied. Some studies have not considered the BMI in the methodology or statistical analysis at all [25,26]. A confounding bias has to be assumed in these studies. In the present study, we logarithmically transformed the initial leptin values in order to obtain a normal distribution ( Figures 3 and 4) and perform parametric statistical tests. To the best of our knowledge, this has not been performed by any of the previously published studies. Previous studies mostly used non-parametric tests, which apply to non-normally distributed data but have weaker statistical power. Certain studies nevertheless performed parametric tests but did not describe the distribution of the leptin values [25,31-33]. The normal distribution and consequently performed parametric tests in our study represent an advantage in our opinion.

Possible limitations also need to be elucidated. First, the possible batch effect due to the duration of the study (11 years), which could mask differences in leptin levels between groups. On the other hand, it is the duration of the study, which allowed a large sample size and sufficient statistical power. Moreover, the retrospective design of the study has to be mentioned. Due to some missing data on hormonal treatment or cycle day as well as progesterone value, some patients could not be included in the ANCOVA analysis. Finally, the determination of the cycle phase could be subject to a certain bias. Although we determined the cycle phase by means of cycle day and, in the mid-cycle period, by means of the progesterone value, as described under paragraph 4, it is possible that individual cases were assigned to an incorrect cycle phase, especially in the case of longer cycles of 35 days and more and short cycles of less than 24 days.

We would like to thank Marie Roumet, PhD (University of Bern) for statistical consulting.

The study was conducted according to the guidelines of the Declaration of Helsinki, and approved by the Ethics Committee of Bern (Kantonale Ethikkommission für die Forschung). Project-ID 2020-00937, date of approval: 07/23/2020.

Informed consent was obtained from all subjects involved in the study.