Copyright: © 2021 Matsuoka T. This is an open-access article distributed under the terms of the Creative Commons Attribution License, which permits unrestricted use, distribution, and reproduction in any medium, provided the original author and source are credited.

Background: ‘Seirogan’ is a well-known Japanese traditional herbal medicine for stomachache or diarrhea due to digestive disorders. Recently, it was reported that the administration of Seirogan alleviated gastric anisakiasis symptoms, and that Seirogan quickly suppressed the motility of Anisakis larvae in vitro.

Objectives: Objective is to determine whether the Seirogan-treated anisakid and raphidascaridid nematodes are just paralyzed or killed.

Methods: We tried to stain Seirogan-treated (1 pill/10 ml) nematodes with trypan blue stain which is widely used for the selective staining of dead tissues.

Results: Seirogan-treated anisakid and raphidascaridid nematodes were stained blue by trypan blue. In addition, Seirogan-treated nematodes were digested by pepsin treatment within 24 h. These results indicate that Seirogan kills anisakid and raphidascaridid nematodes, and suggest that Seirogan may be strongly effective for the treatment of gastrointestinal diseases caused by nematodes.

Conclusion: A widely available intestinal medicine ‘Seirogan’ kills anisakid and raphidascaridid nematodes at its normal dose, and the killed nematodes are soon digested by pepsin.

Seirogan is a well-known Japanese traditional herbal medicine for stomachache or diarrhea due to digestive disorders. In addition, the administration of Seirogan alleviates the severe abdominal pain and other symptoms of gastric anisakiasis [1], a parasitic disease caused by eating raw or undercooked fish or other seafoods that harbor larvae of anisakid nematodes such as Anisakis simplex, A. pegreffii and Pseudoterranova decipiens [2,3]. This disease typically requires hospitalization and in the worst case, can result in perforation of the stomach wall due to the penetration of the organisms. When Anisakis larvae are exposed to Seirogan solution, they quickly become immobile [1]. The medicine’s ability to alleviate abdominal pain due to anisakiasis may be partly related to suppression of the motility of the Anisakis larvae. However, the symptoms of anisakiasis are mainly caused by allergens secreted from the nematodes or substances on the surface of the nematodes [3]. If anisakid nematodes can be killed, not only production and secretion of allergens from the nematodes would halt, but also the nematodes would be disrupted by digestive enzymes in the stomach.

The present study aimed to determine in two kinds of nematodes (pathogenic A. simplex and non-pathogenic raphidascaridid nematodes) whether the nematodes are killed by exposure to Seirogan or are simply paralyzed. 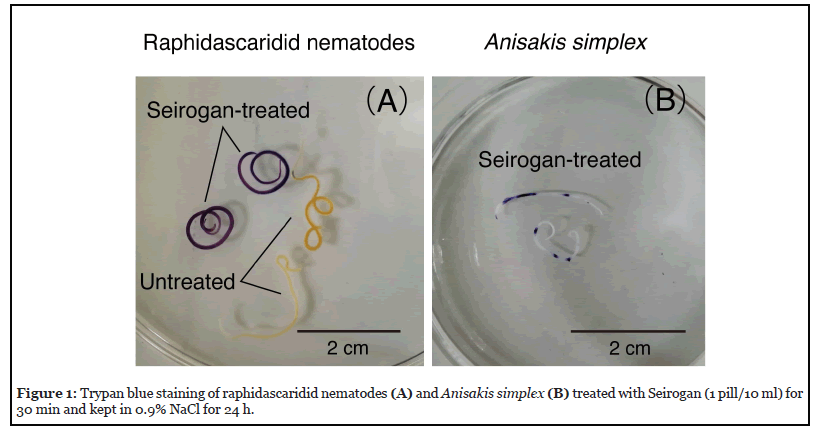 Living Anisakis larvae survive for several days in human gastric fluid containing the digestive enzyme pepsin [5]. The question arises, are the Seirogan-treated nematodes digested by pepsin? The estimated concentration of pepsin contained in human gastric fluid is 13.8 μg/ml [6]. In our experiments, Seirogan (1 pill/10 ml)-treated A. simplex larvae were partially disrupted by pepsin digestion within 24 h [4]. On the other hand, Seirogan (1 pill/10 ml)- treated raphidascaridid nematodes began to be disrupted by pepsin digestion within 1 h after Seirogan treatment (Figure 2A), and were completely disrupted within 24 h (Figure 2B). This indicates that A. simplex is more resistant to gastric digestive juice than raphidascaridid nematodes. The present results suggest that anisakid and raphidascaridid nematodes can be digested sooner or later in the stomach cavity only if they are first killed by oral administration of Seirogan. 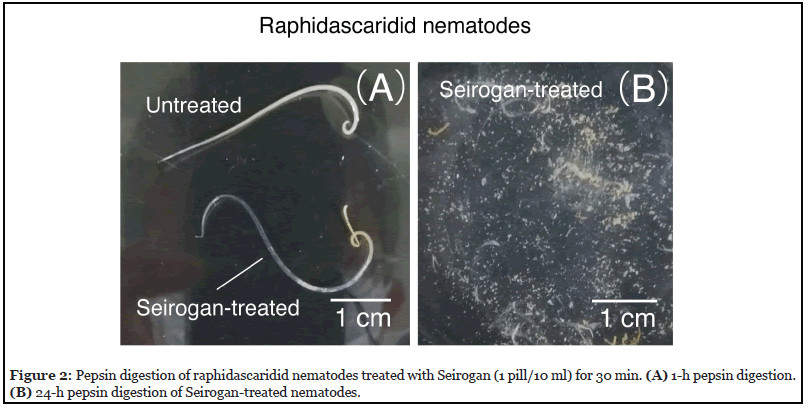 The gastric fluid volume in the fasting state of an adult is about 30 ml [7,8]. If three pills of Seirogan (usual single dose) are completely dissolved in 30-ml gastric fluid, the Seirogan concentration is equal to that used in the present assays. If the nematodes are killed by Seirogan before they penetrate the gastrointestinal wall, the high-risk event of the nematodes perforating the gastrointestinal wall to reach the peritoneal cavity [9] can be avoided.

The problem is that the Seirogan pills seem not to be completely dissolved in gastric fluid. As the next step, a clinical study should be planned to elucidate whether Seirogan pills crushed in a small amount of water can be orally administered.

The present in vitro study suggested that anisakid and raphidascaridid nematodes could be killed by oral administration of the Japanese traditional herbal intestinal medicine ‘Seirogan’, and that the killed nematodes are probably quickly digested by the pepsin contained in the gastric juice. To our knowledge, Seirogan is the first drug discovered to have a strong nematocidal activity on anisakid and raphidascaridid nematodes.

The author declare no competing interests.