Copyright: © 2020 Burnett B, et al. This is an open-access article distributed under the terms of the Creative Commons Attribution License, which permits unrestricted use, distribution, and reproduction in any medium, provided the original author and source are credited.

Objective: To evaluate demographics and outcomes of maternal-fetal pairs in early onset fetal growth restriction (FGR) requiring delivery prior to 34 weeks’ gestation based on ultrasound indication leading to diagnosis.

Study Design: This is a descriptive study of maternal-fetal pairs with early FGR diagnosed prior to 30 weeks’ gestation and delivering between 22w0d and 34w0d under the care of Wake Forest University Perinatology 01/2012-12/2016. Serial ultrasounds to assess fetal growth and umbilical artery flow Doppler velocimetry were evaluated. Pairs were dichotomized into those with maternal comorbidities leading to ultrasound diagnosis, and those with ultrasound indicated only by appreciation of uterine size less than dates on exam. Patient characteristics and outcomes were tracked. Univariate and multivariate analyses were performed as appropriate.

Results: 56 pregnancies were identified with FGR prior to 30 weeks and subsequent delivery prior to 34 weeks. Common comorbidities present in the group with maternal comorbidities included chronic hypertension (30.5%), hypertensive disorders of pregnancy (36.1%), preexisting diabetes (13.9%), gestational diabetes (5.6%). None of the women in the S

Conclusion: Women measuring size less than dates in the mid-trimester should be evaluated by ultrasound without delays. Early FGR carries a high mortality rate in all cases and in our pilot data, women measuring small were diagnosed later with fetal growth restriction and may represent a severe phenotype with poor fetal-placental circulation. These pregnancies often met criteria for urgent delivery in a short time frame, especially if abnormal umbilical artery Doppler velocimetry was noted.

The etiology of fetal growth restriction is rooted in inadequate maternal-placental vascular malperfusion (MVM) of the placenta. Risk factors for MVM are broad and include maternal, fetal, and placental antecedent determinants. These may include maternal disorders including substance use and abuse, maternal nutrition, multiple gestations, teratogenic exposure, or infection. Fetal genetic and/or structural disorders also play a role [1]. While placental disorders such as umbilical cord abnormalities play a role, one undeniable over-arching biological influence is that of inadequate decidualization as demonstrated in human pregnancy as well as in animal models replicating adverse pregnancy outcomes, namely preeclampsia and growth restriction [1-4].

Inadequate decidualization is the most common pathology associated with fetal growth restriction; this process is characterized by lack of removal of the muscular wall of spiral arterioles effectively decreasing capacitance of blood flow across the uteroplacental interface [3]. Increased resistance of blood flow across the uteroplacental interface is a set up for poor placental perfusion, leading to focal infarcts, thromboses, and fibrin deposition within the placental cotyledons [2-4]. However, the obstetrician effectively sees the placental findings long after it’s relevant with respect to delivery timing—on a placental pathology report days after delivery.

Correlating fetal biometry with assessment of the velocity of systolic to diastolic flow in the umbilical artery enables the obstetrician to identify not only increased resistance of flow but, more importantly, which fetuses face risk for uteroplacental insufficiency and in effect face risk for restriction of growth potential, oxygenation of tissues, and ultimately either hypoxic injury or in utero fetal demise (IUFD) [5-7].

Our group set out to evaluate maternal-fetal pairs who were diagnosed with early onset fetal growth restriction diagnosed prior to 30 completed weeks’ gestational age; specifically, those with maternal comorbidities (ie, hypertensive disorders of pregnancy, pre-existing or gestational diabetes mellitus) leading to ultrasound diagnosis versus those referred for clinical suspicion of growth restriction (ie, following identification as uterine size less than dates). Moreover, our objective was to provide additional insight for risk stratification by maternal medical history in context of severe early growth restriction to predict which pregnancies would be most likely to have MVM across the uteroplacental interface and within the placenta sufficient to lead to either emergent delivery or very severely preterm deliveries as a result of lack of appropriate interval growth paired with severely abnormal fetal-placental blood flow.

This is a descriptive study of maternal-fetal pairs with fetal growth restriction diagnosed prior to 30 weeks’ gestation at Wake Forest University School of Medicine, Department of Obstetrics and Gynecology, Section on Maternal-Fetal Medicine (perinatology, WFUP) in Winston-Salem, North Carolina from January 2012 to December 2016. Wake Forest Institutional Review Board approval was obtained for the research protocol. After approval by the Institutional Review Board and the Wake Forest Clinical Translational Science Institute (CTSI), funding for data collection and project work were obtained through the National Center for Advancing Translational Sciences (NCATS), National Institutes of Health, through Grant Award Number UL1TR001420. Likewise, this study was sponsored by Wake Forest University School of Medicine, Department of Obstetrics & Gynecology, Section for Maternal-Fetal Medicine. Study data were collected and managed using REDCap electronic data capture tools hosted at Wake Forest School of Medicine.

Following identification of intrauterine growth restriction (IUGR) prior to 30 weeks, patients were maintained on a prospective list for subsequent retrospective review (ie, clinicians were blinded to candidacy for the study and management was by our academic practice’s routine adherence to American College of Obstetrics and Gynecology (ACOG) Practice Bulletin [6], meaning no alteration or intervention in patient care resulted from the study). If delivery occurred between 22 weeks 0 days (viability) and 33 weeks 6 days (prior to late preterm period), subjects were placed onto a list for chart abstraction and review.

Selection bias was minimized by including all singleton IUGR fetuses with delivery 22-33 6/7 weeks’ gestation without identification of a fetal anomaly/ suspected genetic abnormality or abnormal placentation (eg, exclusion for previa or accreta) and delivery at our hospital. Diagnoses and management of IUGR, preeclampsia with and without severe features and gestational hypertension were according to American Congress of Obstetricians and Gynecologists (ACOG) and Society of Maternal-Fetal Medicine (SMFM) endorsed criteria [9]. Pregnancies were dated according to ACOG criteria- using last menstrual period and first ultrasound to generate the best obstetric estimate [10].

Women were excluded for delivery at 34 weeks or later, multiple gestation, fetal anomalies, fetal genetic abnormalities (eg, aneuploidies or syndromes suspected based on ultrasound, karyotype, or cell free fetal DNA results), or abnormal placentation (eg, placenta previa, placenta accreta, placenta increta, or placenta percreta). Following abstraction of relevant variables, maternalfetal pairs were dichotomized into those with maternal comorbidities leading to ultrasound diagnosis, and those with ultrasound indicated only by appreciation of uterine size less than dates on exam. Review and abstraction chart data was reviewed by the authors who are trained in obstetrics as well as maternal-fetal medicine. All data was validated and cross-checked by the reviewing MFMs (Drs. Street, Quinn, and Denney).

Statistical analyses were performed by exporting data into STATA version 13.0 (College Station, TX). Univariate and multivariate analyses were performed as appropriate. Analyses were conducted using STATA version 13.0 (College Station, Tx) [11]. Ultrasound data and percentiles for gestational age were obtained from our licensed AS-OBGYN ultrasound software package [12]. Baseline characteristics were summarized with frequencies and percentages for categorical data and median plus interquartile ranges for continuous data. Continuous outcome data were evaluated by D’Agostino & Pearson normality test to assess if data were normally distributed and subsequently evaluated with one-way ANOVA for data with a Gaussian distribution or Kruskal- Wallis test for data with a non-Gaussian distribution. Dichotomized data were evaluated with a Chi-square test [13].

663 pregnancies were identified as intrauterine growth restriction or lagging fetal growth during the study period. Pregnancies were excluded for dating after 20 weeks (n=129), abnormal placentation (n=7 previa/ morbidly adherent placenta), delivery for spontaneous preterm labor (n=57), multiple gestation (n=68), delivery not between 22 weeks and 33 weeks 6 days (n=265), and structural defects and/or suspected aneuploidygenetic syndrome (n=81). There were no stillbirths of IUGR fetuses meeting study criteria under our practice surveillance during the study period. Consequently, only 56 pregnancies were identified that met study criteria for well-dated singleton fetus without suspicion for anomalies/genetic syndrome or abnormal placentation and delivery in the gestational age window of 22 weeks 0 days to 33 weeks 6 days.

Of the 56 maternal-fetal pairs requiring delivery for IUGR 22w0d to 33w6d in our study, 38 pregnancies were affected by maternal comorbidities and 18 were IUGR fetuses identified for size less than dates (STable 1). Common comorbidities present in the group with maternal comorbidities included chronic hypertension (30.5%), hypertensive disorders of pregnancy (36.1%), preexisting diabetes (13.9%), gestational diabetes (5.6%) (Figure 1). None of the women in the S 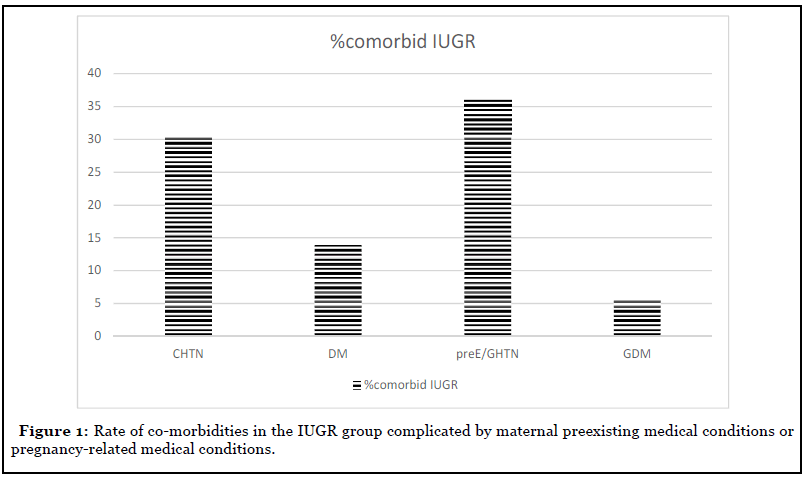 Rates of those delivered for non-reassuring testing in setting of IUGR with simply elevated S/D or intermittent/ persistent end diastolic flow at <34 weeks were similar between groups. Both groups had high incidence of requiring delivery by cesarean section (100% STable 2). However, the STable 2).

Table 2: Pregnancy-course with respect to identification and categorization of IUGR by group. 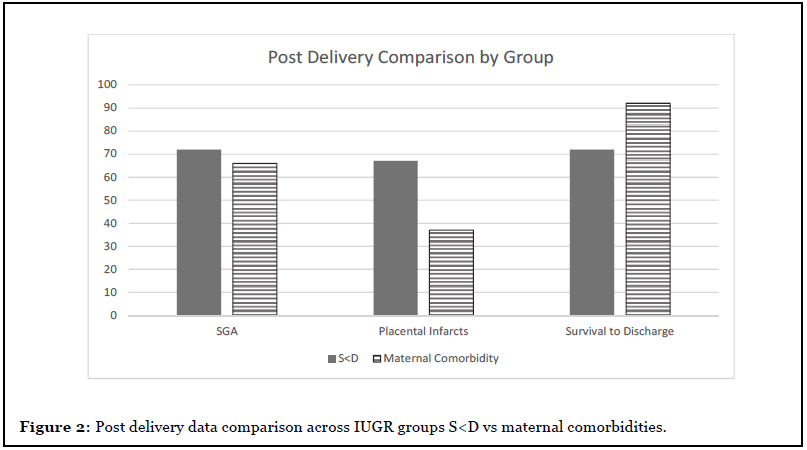 A subanalysis evaluating only babies with abnormal Doppler studies showed a shorter diagnosis to delivery interval and continued to show increased risk of urgent delivery due to fetal status in those pregnancies diagnosed based on sizeTable 4).

Early fetal growth restriction carries a high mortality rate in all cases and in our data, women referred from outside practices for fundal heights measuring small were diagnosed later with fetal growth restriction and may represent a severe phenotype with poor fetal-placental circulation. These pregnancies often met criteria for urgent delivery in a short time frame, especially if abnormal umbilical artery Doppler velocimetry was noted. Our data indicate that when our referring providers refer for uterine size measuring less than dates in the mid-trimester, our unit should make every attempt to evaluate these woman-fetus pairs without delay.

In the otherwise low risk patient, measuring size less than dates in the midtrimester appears to be a surrogate for occurrence of an acute placental malperfusion event at higher relative frequency than our population of women with conditions one would classically view as risk factors for poor placental perfusion. Our data demonstrate that pregnancies complicated by referral for S

Our data are further limited by inherent subjective component of the diagnosis of a non-reassuring fetal status requiring urgent/emergent delivery. While our hospital and academic obstetrical practice continuously reviews the process and qualifications for indicated delivery, urgent delivery, and emergent delivery, patients in need of either urgent (delivery within 30 minutes) or emergent delivery (delivery within 15 minutes) are oftentimes similar when reviewed retrospectively by committee. For the purposes of this our data analysis, urgent indications (eg, recurrent late decelerations) and emergent indications (eg, fetal bradycardia) are pooled into a singular group of “urgent delivery due to nonreassuring fetal status.” Those indicated for nonreassuring BPP (eg, <4/10 for this group of patients at <34 weeks) or umbilical artery Doppler study waveforms demonstrating persistent reverse end diastolic flow at >29 weeks are categorized as indicated and were typically delivered within 1 an hour after the obstetrician made the decision for delivery and notified nursing and obstetrical anesthesia.

Larger numbers of patients would be needed to evaluate specific differences between patients requiring urgent deliveries versus emergent deliveries. Such data would enable evaluation of what risk factors are associated with need for use of cardiopulmonary resuscitation of the neonate immediately after delivery. Likewise, our dataset is too small to look for differences in rates of neonatal outcomes like respiratory distress syndrome (RDS), intraventricular hemorrhage (IVH), or later outcomes like cerebral palsy (CP). However, our data appear to indicate a significant difference in the urgency in which a child needs to be delivered.

The authors have no conflicts of interest to report. These data were presented at the South Atlantic Association for Obstetrics and Gynecology Annual Meeting in Sea Island, Georgia as an oral presentation. Dr. Brian Burnett, first author, was the presenting author and the 2019 McCain Award Recipient for best abstract at the meeting.

The authors gratefully acknowledge Christina Tulbert as our study coordinator in conjunction with the use of the services and facilities of the Wake Forest School of Medicine Clinical and Translational Science Institute (CTSA), funded by the National Center for Advancing Translational Sciences (NCATS), National Institutes of Health, through Grant Award Number UL1TR001420. Likewise, this study was sponsored by Wake Forest University School of Medicine, Department of Obstetrics & Gynecology, Section for Maternal-Fetal Medicine. Study data were collected and managed using REDCap electronic data capture tools hosted at Wake Forest School of Medicine.