Copyright: © 2018 Borah P, et al. This is an open-access article distributed under the terms of the Creative Commons Attribution License, which permits unrestricted use, distribution, and reproduction in any medium, provided the original author and source are credited.

Onion has been a very useful vegetable for human. The organic molecules present in onion are extremely diverse and exert numerous pharmacological pathways to prevent diseases. Although, mechanism of action of the compounds present in onion has been investigated, clearly there remains enough scope to study this subject further. In general, many scientists believe that the medicinal values of onion are because of a series of oxidation processes of the molecules present in it. As result of the medicinal importance of onion, the cultivation of this vegetable around the world has been increased.

Vegetables either in cooked or raw forms are recommended by experts to maintain a good balance of human life. Many vegetables have essential components that fight against diseases. However, the therapeutic values of vegetables differ from one to another. Onion (Allium cepa L.) is perhaps is one of most popular vegetable in the world. The production of onion in China, India, Europe and many other countries are steadily grown because of its usefulness [1]. The bulb of onion is the principal edible part and it serves as the medicinal component as well [2]. Onion has numerous bioactive compounds, such as flavonol and quercetin derivatives [1,3]. It is claimed to have the highest amount of quercetin compared with other plants and this makes onion as a special vegetable to consume on a regular basis [4]. Polysaccharides parts of onion have potent antioxidant property [5]. The antioxidant properties of Allium family of vegetables are known [6,7]. In general, polysaccharides present in onion acts against free radical formation and propagation and therefore, it is a suitable antioxidant. The medicinal values of onion are not limited to a single effect. Rather, onion has a number of medicinal activities. Of them anticancer, anti-coagulant, anti-virus, immune-modulating, anti-inflammatory, anti-complementary and anti-diabetic effects are the most crucial [6-8].

Applications of Onion to Different Diseases

Onion is useful to fight against different diseases. Some of these are documented in this paper. The amount of chloride present in Tropea red onion seeds is much more than the recommended dose. This is important because chloride regulates the function of glycine and gamma-aminobutyric acid (GABA) in central nervous system [9]. The seeds contain significant amount of amino acids, which are extremely important considering the requirement of proteins. Out of these proteins, four amino acids dominate in Tropea red onion seed. They are glutamic acid, arginine, tyrosine and asparagines [10]. Red onion seeds is also composed of sulfur containing compounds (for example, S-alk(en)yl cysteine sulfoxide) (Figure 1). These molecules have numerous health benefits. They improve glycemic level, retard oxidative damage, down-regulate inflammatory-related cytokines, affect anticoagulant properties in diabetic mice through antioxidant activities, and promote adipose tissue cell death. These factors are responsible to keep obesity under control. 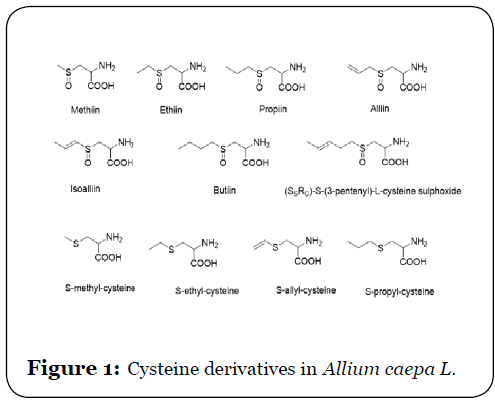 Some chemical reactions take place during the tissue damage procedure. For examples, S-alk(en)yl cysteine sulfoxide is undergone modifications to their respective thiosulfinate and/or propanethial-S-oxide through alliinase enzyme. A few cysteine sulfoxide derivatives are found in the genus Allium. They are methiin, ethiin, propiin, alliin, and isoalliin [11]. In addition, red onion seed contains a variety of other compounds including S-methylcysteine, S-ethylcysteine, S-propylcysteine, S-allyl-cysteine, S-2-hydroxyethyl-cysteine, and S-propylmercapto-cysteine. These compounds are useful to cancer therapies, cardiac problems and for the treatment of dermatological issues [11]. The presence of propylmercaptocysteine is capable to control the food intake [ 12] and cancer risk [13]. The chemical reactions involved in the process are interesting. Mercapto compounds produce persulfide (RSSH) that are the intermediate of sulfane sulfur. It is believed that sulfane sulfur regulates cell proliferations and apoptotic processes. Cysteines present in red onion seeds has a distinct antioxidant effect that may be responsible to treat some of the diseases mentioned above [10]. 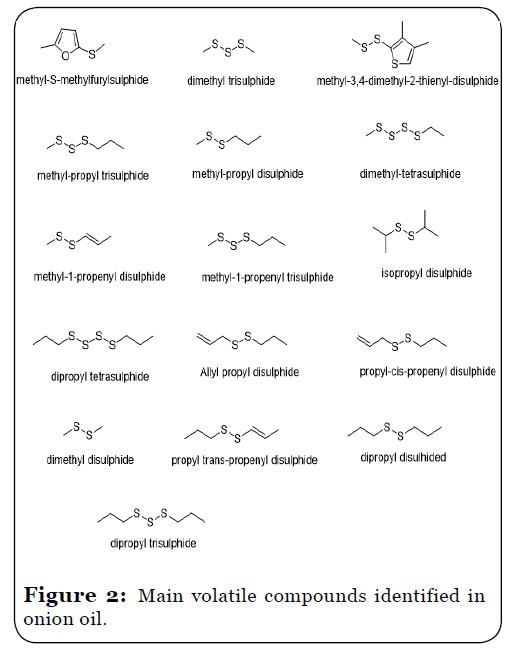 Tropea red onion seeds have steroidal saponins glycosides [15]. These molecules have pharmacological properties that include hypocholesterolemic and antidiabetic [ 16].

Onion is an extremely important vegetable for diverse medicinal reasons. From the literature, only the positive health benefits are observed. The organic compounds present in onion have sulfur with alkene, alkane or amino acid groups. Most of the reactions involved in the health benefits of onions are due to specific oxidation reaction. Scientists may be able to identify processes to improve the quantities of a particular compound in onion over others. While this may be useful for better medical treatment since it is not believed that all components in onions help to promote heath.