1Department of Pharmacognosy, Faculty of Pharmacy, University of Lagos, Nigeria

3Department of Pharmacology, College of Medicine, University of Lagos, Nigeria

Copyright: © 2021 Odimegwu JI, et al. This is an open-access article distributed under the terms of the Creative Commons Attribution License, which permits unrestricted use, distribution, and reproduction in any medium, provided the original author and source are credited.

Background: The rise in the occurrence of hypertension, a non-communicable disease and a major factor for chronic renal failure, cardiovascular disease, and stroke, which most times lead to sudden death is worrisome. Resistant hypertension is more common and may have no symptoms at all for months or years, but then can cause heart attack, stroke, and vision and kidney damage. Prevention and quick management of hypertension is therefore essential in reducing the risk of these debilitating ailments. Aqueous and ethanolic extracts of the leaves of Clerodendrum chinensis (AeC and EeC) are used by local communities of West Africa as medicine for rapid anti-hypertensive actions. We aim to discover the scientific basis for the use of the herb as medicine.

Methods: This work investigates the anti-hypertensive effects of AeC and EeC in L-Arginine Methyl Ester Hydrochloride (L-NAME)- induced hypertensive rats Acetylcholine, L-Arginine and Sodium Nitroprusside were used as standards. All results were expressed as means ± standard error of mean. Differences were considered significant at p<0.05.

Conclusions: Both extracts show significant anti-hypertensive effects and at high doses could lead to hypotension and so should be used with care. Further research is necessary to determine safe dosage forms.

Cardiovascular diseases (CVDs) encompass several coronary artery diseases (CAD) like Angina, Myocardial infarction among others [1]. Other CVDs are cardiomyopathy, hypertension, rheumatic heart disease, heart arrhythmia, peripheral artery disease, and venous thrombosis [1]. These diseases are being witnessed in a larger percentage of the population and in younger subjects too. Also, patients have reported a certain resistance of the disease conditions to known drugs.

CVDs are the highest cause of deaths all over the world. WHO, in 2008 reported that more than 17 million people died from CVDs complications that year alone of which more than 3 million of these could have been prevented by changes in diet and lifestyle. Hypertension, the most common CVD also known as high blood pressure, is a medical condition in which the blood pressure in the arteries is persistently elevated [2]. There has been an increase in incidences of hypertension with the proportion of the global burden of disease attributable to hypertension increasing significantly from 4.5% in 2000 to 7% in 2010 [3]. Hypertension leads to complications with considerable morbidity and mortality which is responsible for at least 45% of deaths due to heart disease and 51% of deaths due to stroke [3]. The number of people with uncontrolled hypertension has increased to about 1 billion worldwide in the past 30 years [4]. The prevalence of hypertension cases is increasing worldwide; in both developed and developing worlds and seen more and more frequently in younger patients [5]. Sustained high blood pressure is considered responsible for many serious medical conditions such as arteriosclerosis, heart failure, kidney failure, blindness, and cognitive impairment, and also for many deaths from stroke and heart disease. Systolic, diastolic, and pulse pressure are important predictors of cardiovascular risk [6].

Scientists are reverting to nature for solutions to ailments hence the renewed great interest in plants with antihypertensive compounds used locally but not certified scientifically. Clerodendrum chinensis [Osbeck] Mabb.

Figure 1 (Chinese glory bower, glory tree, Honolulu rose, stick bush) is a species of flowering plant in the genus Clerodendrum. It is placed in the family Lamiaceae, a native to Asian countries of China, Korea, Taiwan, Japan, Vietnam, Western Samoa and American Samoa [7] where it grows commonly as a weed along roadsides and as an ornamental shrub with stout branches. The plant has several synonyms; C. fragrans, C. japonicum etc [8]. The leaves’ tinctures are diuretic [9]. A decoction of the leaves is used in the treatment of blenorrhoea (Chlamydial conjunctivitis) and reputedly a remedy for difficult cases of scabies. Juice from the leaves is an ingredient of herbal bath for children with furuncles [7]. The plant is used for the treatment of rheumatism and ague and as an ingredient of a mixture for treating skin problems [10]. The root extracts are considered antibacterial, and diuretic. It is used in the treatment of abdominal pain, intestinal disease and kidney dysfunctions. It is said to have been used successfully in the treatment of jaundice, lumbago, and hypertension [7]. It is often grown as an ornamental, the double-flowered but sterile form being most commonly cultivated [11]. 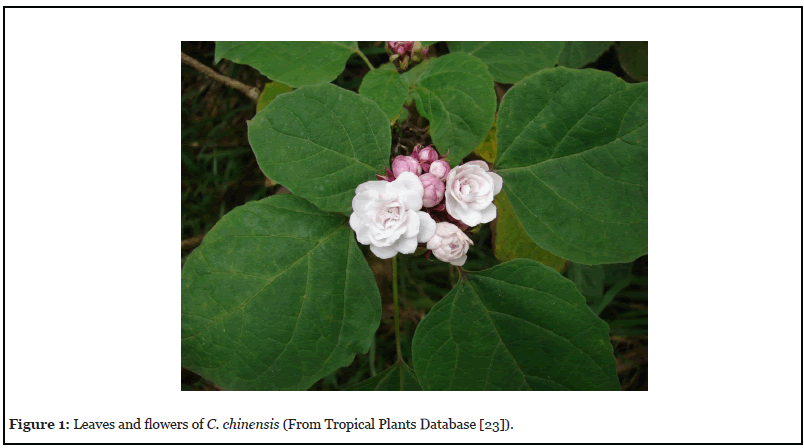 L-arginine (L-ARG) is an amino acid with lipid peroxidation-lowering effects which may account for its beneficial effect on Systolic Blood Pressure (SBP) and vascular responsiveness [15]. The objectives of this work are to study the anti-hypertensive effects of AeC and EeC and evaluate its safety by acute toxicity of using L-NAME induced hypertensive rats.

The leaves of Clerodendrum chinensis were originally from plants collected from Abidjan, Ivory Coast and cultivated in a private garden at Lekki, Lagos State, Nigeria 6°29′36″N 3°43′14″E. Verification of the plant identity was carried out at the Herbarium of the Department of Botany, University of Lagos, Nigeria and plant assigned voucher number FIH 6974.

Ethanol extract, EeC; leaves were air-dried and ground then extracted with absolute ethanol, using cold maceration. The mixture was filtered and extract concentrated by evaporation, air-dried and stored at 20°C.

Aqueous extract, AeC; leaves were air-dried and pulverized then macerated in distilled boiling water (100oC) and the marc obtained was left to stand for 24 hours and then filtered. The filtrate obtained was concentrated by evaporation at 50°C and the extract stored at 20°C.

Phytochemical studies were conducted on AeC and EeC for the presence or absence of Alkaloids, Flavonoids, Anthraquinones (free or combined), Tannins, Steroids, Saponins, Terpenoids, and Cardiac glycosides.

Male Wistar rats (8-10 weeks, weighing 130-170 g) were used. All animals were housed under constant temperature and exposed to a 12 hr light/12 hr dark cycle and were fed a standard chow diet. Animal protocols were approved by the ethics committee for the care and use of laboratory animals at the University of Lagos, Nigeria. After 1 week of acclimatization, the animals were randomly divided into 5 per group for Aqueous and Ethanolic extracts into the following experimental groups;

Blood pressure measurement for the duration of experiment was carried out with a power lab (TICE®).

Animals were anaesthetized humanely at the end of the experiments according to established protocols. The extracts and the standard agents were administered twenty minutes (20 mins) after L-NAME administration. Heparin solution was injected in the arterial catheter at intervals to avoid possible blood coagulation. Readings obtained were analyzed using the power lab and recorded. The safety effects of AeC and EeC were studied In-vivo on the systolic blood pressure, diastolic blood pressure and mean arterial blood pressure of rats treated with L-NAME.

A single dose test was carried out for acute toxicity of the extracts. A dozen mice were fasted for 16 hours and then administered 5000 mg/kg AeC and EeC separately. They were observed for 24 to 72 hours for signs of behavioral change and death.

Statistical analysis was performed and carried out by student’s t-test using Graph Pad Prism 5.0. All results were expressed as means ± standard error of mean (SEM). Differences were considered significant at p<0.05.

Phytochemical analysis showed the presence of flavonoids, alkaloids, steroids, terpenoids, and cardiac glycosides in the leaves of the test plant. The intravenous administration of AeC and EeC to L-NAME induced hypertensive rats caused a significant decrease in systolic blood pressure, diastolic blood pressure and Mean Arterial Blood Pressure (Figures 2-5 and Appendices). Table 1 shows that the control groups were adequate as controls as the saline group did not show any significant increment or decrease in the parameters of importance while the L-NAME control group showed an increase in the parameters. It is well known that L-NAME, administered either acutely by intravenous route or chronically through oral route induce sustained hypertension [16,17]. The genus Clerodendrum is well documented to have beneficial effects on the cardiovascular system of mammals due to its significant flavonoid content [18,19]. Indeed, flavonoids from a great variety of plants have hypotensive and vasorelaxant activities [20,21]. Wang et al., [22] conducted an extensive study of the diverse phytochemicals in aqueous and methanolic fractions of different plant parts and published them with relevant structures. 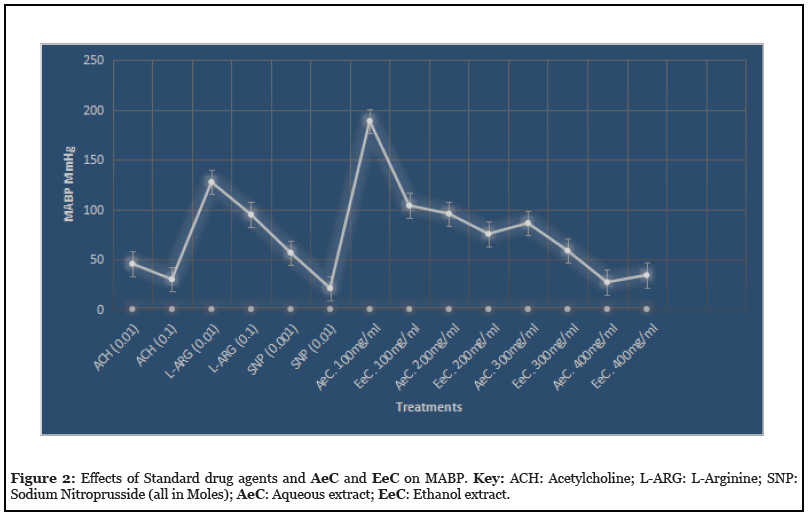 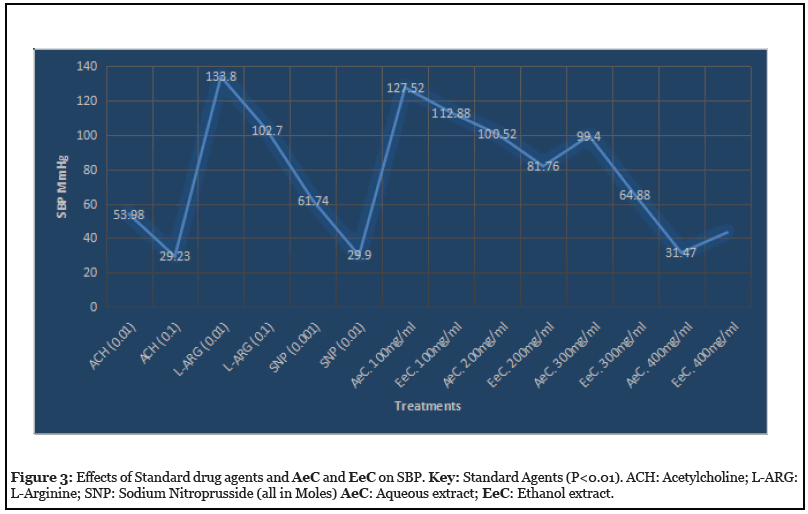 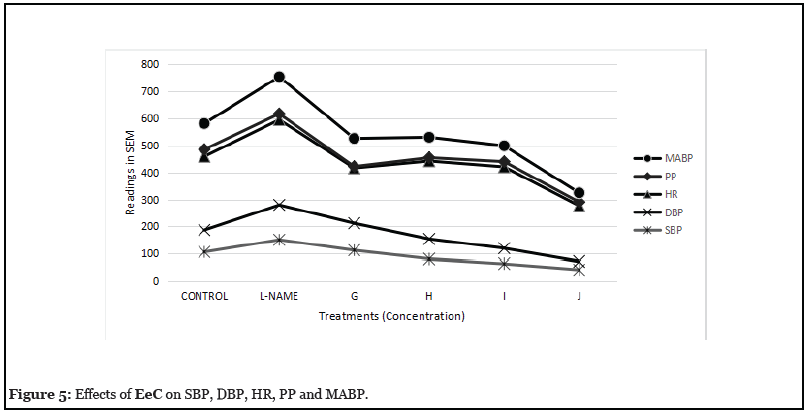 Table 1: Effect of Saline and L-NAME on the Control animals.

MABP dropped suddenly after administration of 400 mg/ml to 27± 1.5 mmHg. The immediate fall in blood pressure induced by the doses (100, 200, 300 and 400 mg/ml) of the AeC was followed by a short-lasting effect indicating that the anti-hypertensive effects of the AeC are dose-related.

The effects were more lasting than that of the AeC and are observed to also be dose-related. The result, however, shows that the elevated MABP was reduced more by the EeC when compared to the AeC in the L-NAME induced hypertensive rats. AeC, at 100 mg/ml, 200 mg/ml and 300 mg/ml reduced blood pressure and did not go below 90 mmHg/60 mmHg and can be considered as appropriate doses in reducing high blood pressure. For the EeC, only 100 mg/kg was identified to reduce high blood pressure below 90 mmHg/ 60 mmHg and can be considered appropriate in reducing blood pressure also (Figures 3 and 4).

This study demonstrated the acute anti-hypertensive properties of the AeC and EeC in Nitric Oxide deficient hypertensive rats. The observed effects could partially be due to the reduction of the peripheral resistance by thwarting the acute inhibitory effect of L-NAME on endothelial Nitric Oxide Synthase. The recorded results authenticate its use in traditional medicine for the treatment of hypertension. Clerodendrum chinensis leaves extract, have shown to exhibit more potent anti-hypertensive properties when compared to known standards. Further studies are however required to check specific mechanisms of action and best and effective dosage forms.

Ethical Approval and Consent to Participate

All the authors have seen the manuscript and agree to the publication.

This research did not receive any specific grant from funding agencies in the public, commercial, or not-forprofit sectors.

Odimegwu JI Conceptualized the research, designed the methodology, wrote up the original draft and corrected the final manuscript.

We are grateful to Prof. Chantal Epie who collected the plants and told us about its actions and also to Mme Rosemary Ossai for cultivating and multiplying the plant for more sample materials for this work.