Copyright: © 2021 Tang Y, et al. This is an open-access article distributed under the terms of the Creative Commons Attribution License, which permits unrestricted use, distribution, and reproduction in any medium, provided the original author and source are credited.

Cancer is one of the leading causes of death worldwide. The immune system plays an important role in all steps of cancer development, growth and spreading as was repeatedly proven in a variety of experimental and clinical studies. Among the immune cells, Natural Killer cells, or NK cells, are critical to the innate immunity as one of the key effector cells of cancer immunosurveillance. NK cells’ role in the immunity against cancer is mediated by exerting cytotoxicity and secreting a variety of cytokines to inhibit tumor growth and progression. Therefore, one of essential pathways of cancerogenesis and tumor escape from immune recognition and elimination may be associated with NK cell defects. In fact, the abnormal NK cells and their functional impairment in patients with cancer may contribute to the progression of different cancer types. In particular, the exhaustion of NK cells that represents lower cytotoxicity and impaired cytokine production may serve as a predictor for the occurrence of several cancers. The authors have evaluated potential molecular defects in NK cells isolated from healthy donors and cancer patients by assessing expression of key molecular regulators of NK cells, including c-Myc, Notch1, Notch2, p-53, Cdk6 and Rb. The results revealed a reduced expression of c-myc proto-oncogene and Notch1 signaling in NK cells in cancer patients. It was also uncovered that molecular abnormalities were not limited to NK cells but could be also seen in other lymphocytes, particularly T cells. It is conceivable that correction of NK cell molecular defects and functional rescue of NK cells will be great promise for cancer treatment.

Natural Killer (NK) cells play a key role in the immune responses against infection and cancer as powerful cytotoxic effector cells and regulators of both innate and adaptive immunity [1,2]. Therefore, defects in NK cell functions are important mechanisms for immune evasion of malignant cells [3]. For instance, the ability of tumor cells and tumor-associated stromal/infiltrating cells to inhibit NK cell activity, which results in preventing NK cells from recognizing and killing tumor cells, has been reported for melanoma, neuroblastoma, gastrointestinal sarcoma, hepatocellular cancer (HCC), pancreatic cancer, colorectal carcinoma and other types of cancer [4-9]. A potential loss of NK cell numbers and function at preneoplastic stages of tumorigenesis as a possible mechanism for cancer induction and progression has been also recently proposed [5,10]. However, molecular mechanisms regulating NK cell dysfunction and exhaustion in cancer are largely unclear.

Furthermore, the link between NK cell deficiency and cancer risk has been also suggested. For instance, the abnormal NK cells and their functional impairment in patients with chronic hepatitis B virus (HBV) and hepatitis C virus (HCV) infection, which contribute to the progression of HCC have been documented [11]. Moreover, comparative mRNA gene expression profiling by wholehuman- genome microarrays combined with phenotypic and functional characterization of circulating NK cells from patients with HCV-related liver cirrhosis and HCC identified energy metabolism and cell motility defects of NK cells as main mechanisms responsible for functional NK cell damage in patients with cancer [12]. Published analysis of the ‘omic’ data (i.e., tumor RNA-seq and wholeexome sequences of germline genomes) representing 13 common types of cancer showed that people with inherited defects in NK cells have a higher risk of developing cancer [13]. The number of inheritably defected genes in NK cells was irreversibly correlated with patients’ survival, level of tumor-infiltrating lymphocytes and response to immunotherapy. The authors proposed that “cancer was a disease of NK cell inherited deficiencies” [13]. They concluded that their results suggest that high cancer risk individuals may be identified based on germline genomes and that cancer development may be prevented by adoptive transfer of healthy NK cells. But the exact mechanisms and origin of NK cell defects that might predispose to cancer development are unknown [14-16].

Proto-oncogenes in nonmalignant cells are often involved in signal transduction and performance of mitogenic signals and this regulates cell growth and proliferation or inhibition of apoptosis. They could become oncogenes through mutations or overexpression predisposing the cell to cancer, i.e., unregulated cell division, a slower rate of cell differentiation and increased inhibition of cell death [17]. For example, overexpression of the c-myc proto-oncogene features prominently in most human cancers. Since proto-oncogenes control cell functions that are pivotal for multiple cell development and normal physiologic function, it was hypothesized that proto-oncogenes in immune cells may also be associated with immune defects in cancer [18]. Analyzing peripheral blood lymphocytes harvested from healthy donor and patients with cancer, the authors revealed a significant reduction of c-myc proto-oncogene expression in both circulating NK and T cells in cancer [19]. Of particular importance of these unexpected results was the fact that a decrease in c-myc expression was observed in all cancer patients regardless of the stage of the disease and the presence of metastases. Thus, these results suggest that cancer patients may have a common mechanism of lymphocyte abnormalities in proto-oncogene expression. Next logical step was to evaluate signaling pathways that are functionally associated with c-Myc. Therefore, Notch1, Notch2, p53, Cdk6 and retinoblastoma (Rb) protein expression was evaluated. 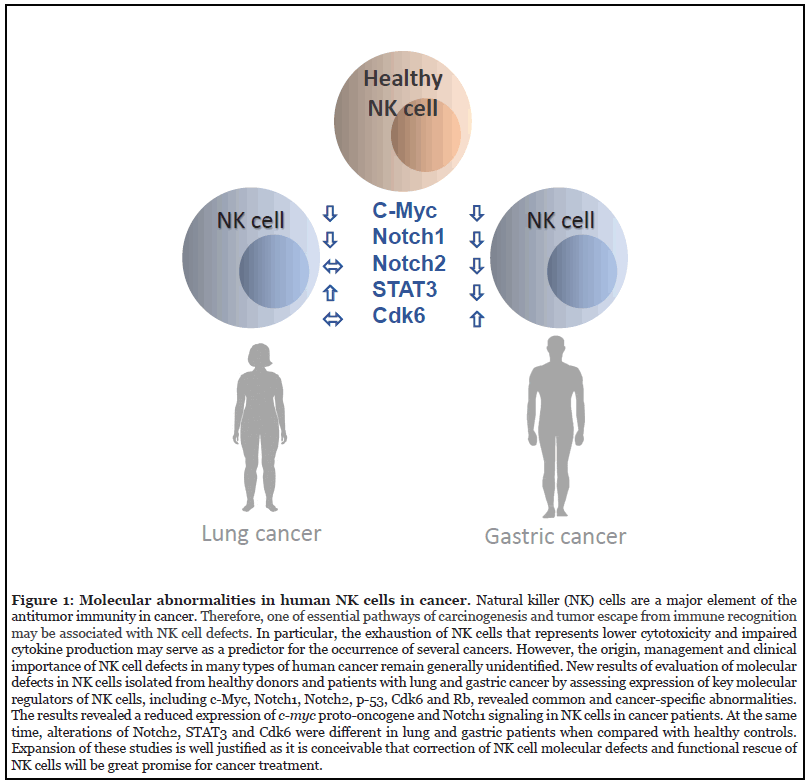 Analysis of tumor suppressor protein p53 expression was important for two reasons: it regulates c-Myc transcriptional repression and monitors NK cell maturation [20,21]. And defects in the maturation of NK cells in cancer have been reported [22,23]. However, no significant changes in p53 expression in cancer patients have been detected in the study [19]. Thus, the observed decrease in c-Myc transcription factor was not associated with tumor suppressor p53 abnormality in NK cells isolated from patients with cancer. This is in contrast to tumor cells where a combined defect of c-myc protooncogene and p53 oncosuppressor in the same cells are commonly observed [20,24]. Therefore, it is likely that the immune cells, particularly NK cells, have a different nature of the proto-oncogene defects than seen in malignant cells.

Thus, while lung cancer patients show a defect in Notch1 expression, gastric cancer patients displayed a significant decrease in both Notch1 and Notch2 expression in NK cells [19]. These results are consistent with other studies where Notch2 signaling was assessed in patients with other cancers. For instance, the central role of Notch2 but not Notch1 in pancreatic intraepithelial neoplasia progression and malignant transformation has been recently demonstrated [31]. Similarly, Notch2 but not Notch1 has been shown to play a key role in pancreatic carcinogenesis [32]. In addition, unlike Notch1, Notch2 is considered to be important for both hepatogenesis and hepatocarcinogenesis [33,34]. Furthermore, elevated expression of Notch2 is associated with gastric cancer formation and a poor prognosis in patients with intestinal and diffuse-type gastric cancers [35,36]. Notch2 may also act as an oncogene that promotes bladder cancer growth and metastasis [37].

Furthermore, CDK6 activation plays an important role in the onset and progression of many types of cancer including lymphoma, leukemia, glioma, glioblastoma, medulloblastoma, squamous cell carcinoma, HCC, bladder, pancreatic, prostate, gastric and lung cancers [42-45]. However, the results of this study suggest that the defect of the NK cell cycle in cancer patients is not associated with the expression or activation of Cdk6. C-Cdk6 enzymatic complex phosphorylates Rb resulting in release of a transcriptional activator E2F, which activates DNA replication, but in this study no significant differences in the appearance of total and activated Rb in NK cells of cancer patients has been detected [38]. Although Cdk6 is important for the control of G1 to S phase transition, new evidence showed that the presence of Cdk6 is not necessary for proliferation in all types of cells [46]. Genetic analysis confirms that many cell types can proliferate in the absence of Cdk4/6 or D cyclins [47]. It has been also reported that Cdk6, in addition to being a cell-cycle kinase, has important kinase-independent functions as a transcriptional regulator and can exert its full tumorpromoting function by enhancing proliferation and stimulating angiogenesis [48]. Therefore, the significance of increased Cdk6 expression in immune cells in cancer is still unclear.

Finally, studies aiming at identification of potentially inherent or extrinsic tumor-induced immune cell abnormalities in cancer should comprehensively analyze different subsets of lymphocytes and their precursors in patients with different types of cancer and in high cancer risk populations. The studies discussed here [18,19,38,49] represent an example of Notch1/c-Myc signaling evaluation in NK and T cells in cancer. These signaling molecules among other molecules may represent a proper target for immunotherapeutic approach aimed at NK-cell functional repair. This opens the opportunity to test and verify various approaches to restore NK cell response in cancer patients.

The authors declare that the research was conducted in the absence of any commercial or financial relationships that could be construed as a potential conflict of interest.