Copyright: © 2021 Mulherkar T, et al. This is an open-access article distributed under the terms of the Creative Commons Attribution License, which permits unrestricted use, distribution, and reproduction in any medium, provided the original author and source are credited.

Inflammatory responses, although effective in eliminating pathogens, are also associated with many diseases including asthma, chronic inflammatory diseases, atherosclerosis, cancer, diabetes, and autoimmune and degenerative diseases [1]. Excessive inflammation contributes to host tissue damage, exacerbating disease conditions such as neuroinflammatory diseases in which the brain and spinal cord are attacked. In cases of excessive inflammatory response, anti-inflammatory agents are needed to reduce and control inflammatory symptoms. Currently, medically prescribed anti-inflammatory agents include cyclooxygenase inhibitors such as Aspirin and nonsteroidal anti-inflammatory drugs (NSAIDs), glucocorticoids such as cortisol, and anti-cytokine therapies [2]. While these drugs on the market effectively decrease inflammation, they also tend to be costly and toxic to some extent. Further research on safer, less toxic, cost-effective alternative treatments is needed. Apigenin is a natural flavonoid found in produce such as fresh parsley, vine spinach, celery, dried oregano, oranges, onions, tea, and cilantro [3]. Increased flavonoid intake has been associated with chemoprotective effects in gastric, colon, lung, breast, ovarian, and endometrial cancers [4]. Specifically, apigenin has been used in alternative medicinal approaches to treat asthma, shingles, Parkinson’s disease, neuralgia, and insomnia [5]. The paper “Apigenin Modulates Dendritic Cell Activities and Curbs Inflammation Via RelB Inhibition in the Context of Neuroinflammatory Diseases” by Ginwala et al. demonstrates apigenin’s function as an anti-inflammatory agent and explores its potential use as a therapy for neuroinflammatory disease [6].

Previous studies by Ginwala et al. found that apigenin treatment delays the course and attenuates EAE in a mouse model by reducing the severity of the disease [5]. EAE mice treated with apigenin showed significantly less amounts of demyelination, indicating a successful reduction in neuroinflammation upon treatment. In this study, mechanisms that mediate apigenin’s effects on immune cells were investigated with a specific focus on dendritic cells (DCs). DC activation is known to be regulated by the canonical and non-canonical NF-κB pathways, of which protein RelB is a part of (Figure 1) [7]. RelB is a component of the NF-κB complex of transcription factors that is critical in regulating the differentiation of DCs. DCs are potent antigen presenting cells (APC) involved in T helper cell activation [8]. RelB knockout mice have DCs that are deficient in their ability to activate T cells, thus RelB is conclusively involved in the antigen presentation function of DCs [8]. Upon activation of the RelB pathway, RelB is translocated to the nucleus to initiate transcription of NF-κB related genes [7]. Downstream effects of RelB activity include pro-inflammatory type I T helper cell (Th1) response and DC maturation, making it a potential target of anti-inflammatory drugs. Ginwala et al. found that apigenin reduces mRNA and protein levels of RelB, as well as the nuclear translocation of RelB, resulting in downregulation of DC-mediated T cell immune response [6]. Downstream targets of RelB were also reduced upon apigenin treatment. By decreasing RelB levels, apigenin interferes with Th1 activation, decreasing the overall inflammatory response. 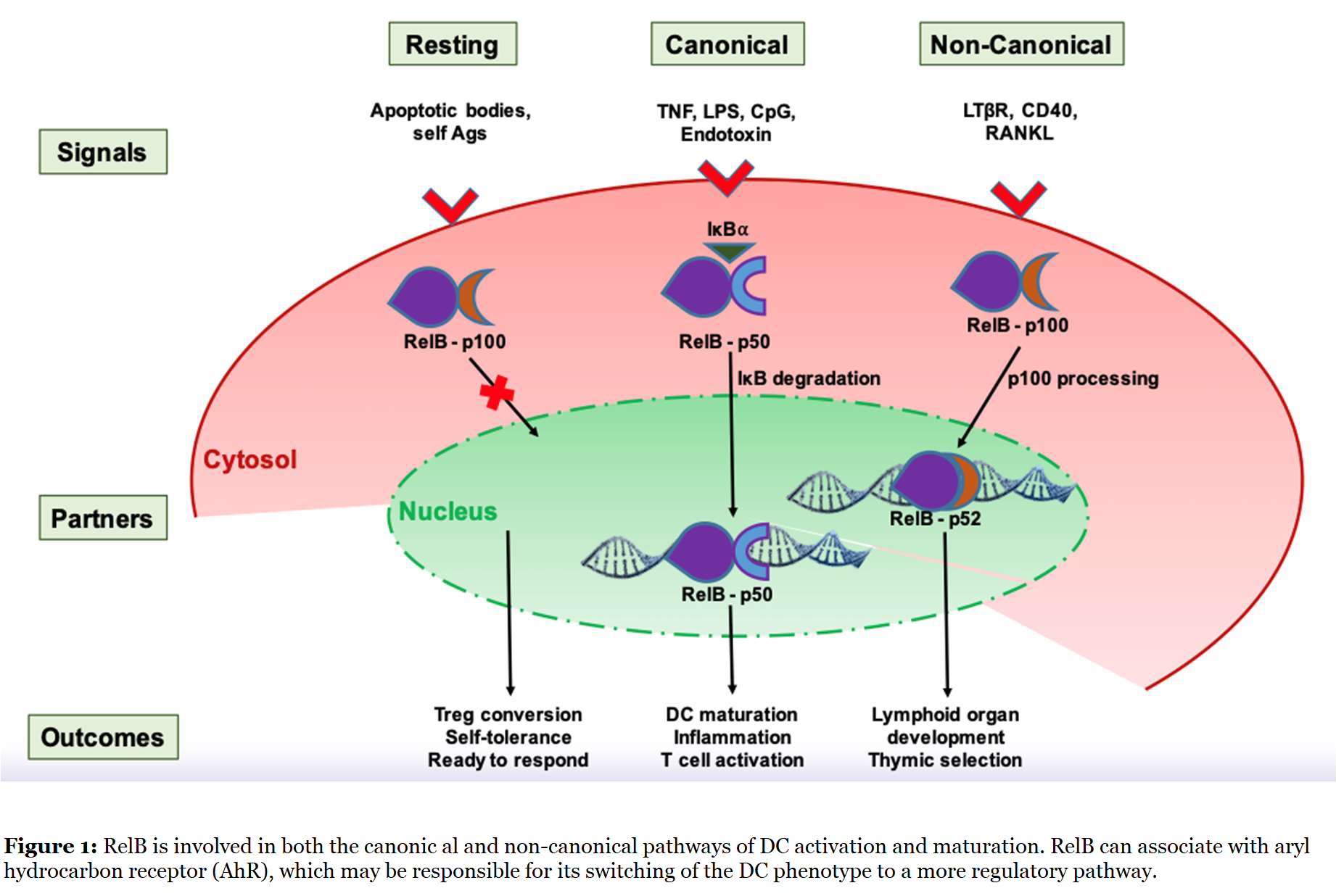 Further studies conducted by Ginwala et al. explore apigenin in the context of tumor necrosis factor alpha (TNF-α). TNF-α-mediated inflammation is shown to be involved in chronic inflammatory conditions such as ankylosing spondylitis, rheumatoid arthritis, and Crohn’s disease [9]. The two components of TNF-α responses include a transmembrane TNF-α form (tmTNF-α) and soluble TNF-α form (sTNF-α). sTNF-α mediates biological activity through type 1 and 2 TNF receptors known as TNF-R1 and -R2 [10]. While tmTNF-α can bind both TNF-R1 and -R2, it primarily acts through interaction with TNF-R2 [10]. Conversely, TNF-R1 activity is mainly associated with the ligation of sTNF-α. During an initial inflammatory response, TNF-α is released at low levels, providing protective effects of pathogen control and tissue regeneration through tmTNF-α/TNF-R2 interaction. In a dysregulated inflammatory response as seen in chronic inflammatory conditions, large amounts of sTNF-α are released [11,12]. sTNF-α induces a proinflammatory response through TNF-R1 binding. Thus, TNF-α at low levels is protective while higher levels of sTNF-α can result in excessive inflammatory responses (Figure 2). Authors showed that treatment with apigenin decreases serum concentrations of sTNF-α, confirming its antiinflammatory effects. Some TNF-α inhibitors selectively block sTNF-α, specifically decreasing the pro-inflammatory effects while other TNF-α inhibitors block both sTNF-α and tmTNF-α, blocking both the pro-inflammatory and protective effects of sTNF-α and tmTNF-α, respectively. Inhibiting the interaction between tmTNF-α and TNF-R2 could potentially result in a negative outcome for the patient, thus sTNF-α-specific inhibitors are preferred. The specificity of apigenin-mediated TNF-α inhibition is currently unclear and will have to be further elucidated before proceeding to clinical trials. 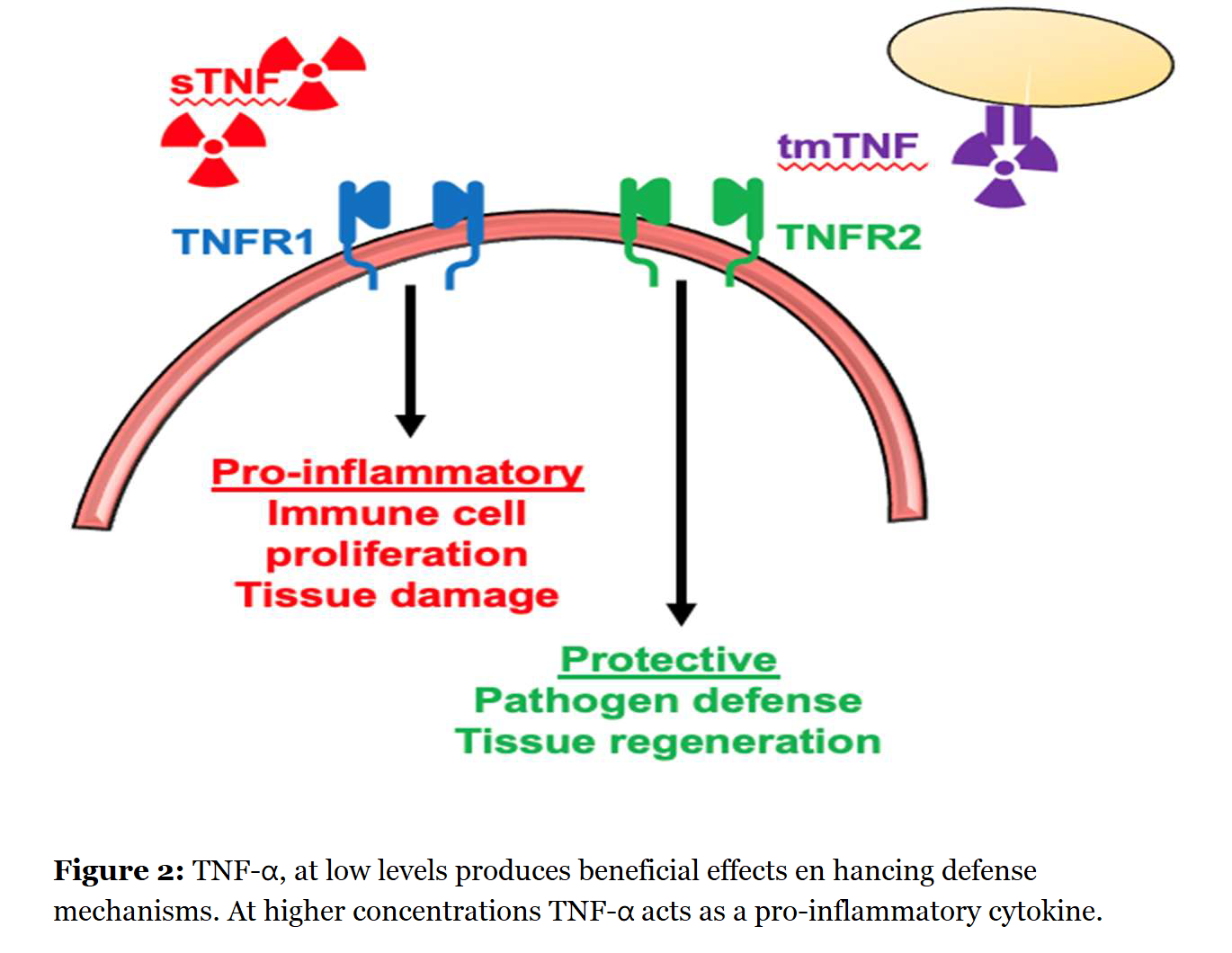 This study further showed that Apigenin acts as an anti-inflammatory agent by decreasing levels of RelB and TNF-α; however, there are still several questions about Apigenin that need to be answered. Although Apigenin appears to decrease levels of RelB and TNF-α levels, the biochemical mechanism by which it does so is unclear. Future directions of Apigenin research include determining which receptor(s) Apigenin interacts with to exert its effects. Two possible points of focus for research include investigating whether Apigenin partners with an aryl hydrocarbon receptor to inhibit RelB signaling and whether Apigenin effects DC function through interaction with the TNF-R1 receptor.

Apigenin could promote RelB inhibitory signaling through partnership with an aryl hydrocarbon receptor. Aryl hydrocarbon receptor (AhR) is a cytosolic receptor protein and a ligand-dependent transcription factor that is capable of sensing environmental and physiological stress [13]. Depending on the type of ligand it encounters AhR can activate different subsets of immune cells leading to either an immunogenic or tolerogenic response. These ligands may fall in to two distinct categories; one, tryptophan derivatives that are endogenously produced or derived from the diet and two, aromatic hydrocarbons that are mainly environmental toxins [14]. AhR is also known to interact with RelB in the process of DC differentiation and maturation producing distinct liganddependent responses. AhR ligation by environmental toxin 2,3,7,8-tetrachlorodibenzo-p-dioxin (TCDD) produces immunogenic DCs through the increased expression of MHC II, and CD86 [15], however endogenous ligands such as 6-formylindolo[3,2-b]carbazole (FICZ) and 2-(1′H-indole-3′-carbonyl)-thiazole-4-carboxylic acid methyl ester (ITE) inhibited the production of IL-1β, IL-6, IL-23 and TNF-α, but induced IL-10 production by DCs [13]. Also, TCDD-based AhR-mediated DC stimulation involves increased DNA-binding of RelB with Co-IP results also showing physical interaction between AhR and RelB [15]. AhR role in autoimmune diseases such as MS has also been indicated through ligand-dependent production of either Th17 or Treg cells. In this case, endogenous ligand FICZ exacerbates EAE disease through increased Th17 generation while exogenous ligand TCDD improves disease outcome through increased production of Tregs [14]. Finally, AhR activation has been implicated as a therapeutic approach in MS with decreased levels of AhR activity detected in MS lesions as compared to controls. It has been suggested that decrease in AhR ligand availability may be a contributing factor in MS pathogenesis. Dietary and probiotic interventions may be able to boost the availability of these as yet unknown AhR ligands. Thus, the role of Apigenin role in AhR activation and subsequent downstream effect of DC activation may provide crucial insights to Apigenin-mediated neuroprotective effects in MS. Co-IP studies will also reveal RelB-AhR association in DCs upon Apigenin treatment providing functional pathway for either an increased tolerogenic DC response or decreased immunogenic DC response.

Determining whether Apigenin interacts with receptors such as TNF-R1 could help determine its specificity as a TNF-α inhibitor. DCs are key producers of TNF-α in response to TLR4 stimulation. TNF-α production and the subsequent activation of downstream signaling pathways critically influences the nature of the inflammatory and immunological responses while its dysregulation can contribute to the pathogenesis of several autoimmune diseases [16,17]. TNF-α has been implicated in the pathogenesis of almost all chronic inflammatory conditions reviewed in Chapter I. Its secretion has been shown to be successfully inhibited by Apigenin in several cell types including macrophages and DCs [18-20]. TNF-α is initially produced in a transmembrane form (tmTNF-α) and later released in the form of soluble protein (sTNF-α). At low levels during an initial inflammatory insult, TNF-α produces protective effects of pathogen control and tissue regeneration through the interaction of tmTNF-α with TNFR2. Dysregulation of the inflammatory response as seen in chronic unresolved inflammatory conditions produces larger amounts of sTNF-α that induces the proinflammatory actions of TNF-α through TNFR1 signaling [11,12]. Selective inhibition of sTNF-α has been found to alleviate disease severity in EAE mice, making it an important therapeutic target in the control of CNS inflammation. Several anti-TNF therapies have been FDA-approved for the treatment of chronic inflammatory diseases such as Crohn’s disease, ankylosing spondylitis, and rheumatoid arthritis. However, clinical trials of anti- TNF therapies in MS exacerbated disease symptoms increasing CNS demyelination due to non-specific targeting of both sTNF and the protective tmTNF. Moreover, use of TNF inhibitors can cause side effects that include opportunistic infections, reactivation of tuberculosis, development of autoimmune disease, and an increased risk for lymphoma. Before taking Apigenin to clinical trials for assessing its efficacy in MS patients, thorough preclinical studies in animal models will have to be carried out to determine the specificity of TNF inhibition. Using mice selectively ablated for the production of TNF-R1, it can be determined whether Apigenin solely acts through inhibition of TNF-R1 activation. EAE development occurs in TNF-R1 knockout mice, but does not lead to extensive demyelination suggesting a role of TNF-R1 in signaling events leading to demyelination. If Apigenin treatment is not able to ameliorate EAE in TNF-R1 mice then it can be concluded that Apigenin protective effects in EAE are through its inhibition of TNF-R1 mediated signaling.

While published studies determined that Apigenin impacts DC maturation and T cell activation, it is unknown whether it impacts DC migration capabilities. Beyond DCs, what other cells are directly or indirectly impacted by Apigenin? Another factor to consider is the bioavailability of Apigenin. Although flavonoids are found in everyday foods, the bioavailability of flavonoids is generally low. Apigenin has both a low solubility and a low bioavailability [3]. The main factors contributing to Apigenin’s low bioavailability include Apigenin’s low solubility, ATPbinding cassette (ABC) transporter activity, and phase II metabolic enzyme activity [21]. ABC transporters are located on the apical side of the epithelial lining of the gastrointestinal tract and are involved in effluxion of flavonoids from the epithelial cells, essentially hindering their absorption. Phase II metabolic enzymes include uridine-5’-diphosphate glucuronosyltransferases (UGTs) and catechol-O-methyl transferases (COMT) that limit flavonoid absorption by converting them to hydrophilic forms, increasing their excretion. Thus, mechanisms of increasing bioavailability of Apigenin include inhibition and down-regulation of ABC transporters and phase II enzymes. Apigenin has some ABC transporter-inhibiting activity, which is synergized by co-treatment with other flavonoids such as quercetin. Digestion of Apigenin to is found to involve enzymes produced by gut microbiota [3]. Administration of pro-biotics in congruence with Apigenin may help to increase the bioavailability of Apigenin. Finding plausible solutions to increasing Apigenin’s bioavailability will make Apigenin a more effective target for use in therapy. Answering these questions will help to develop a clear picture of which cells Apigenin impacts in the body, which receptors it binds to, what downstream effects result from receptor binding on a biochemical level, and how its administration changes the biochemistry of a patient on a holistic level.